Having previously reviewed a few dashcams – some of them even being cleverly concealed these days – but what about a dash cam built into a sat nav? Garmin have you covered!

For around £50 extra you can opt for the DriveAssist 50LMT-D over the non camera equipped DriveSmart 50LMT-D model, a decent dash cam could almost set you back the price of this whole unit. 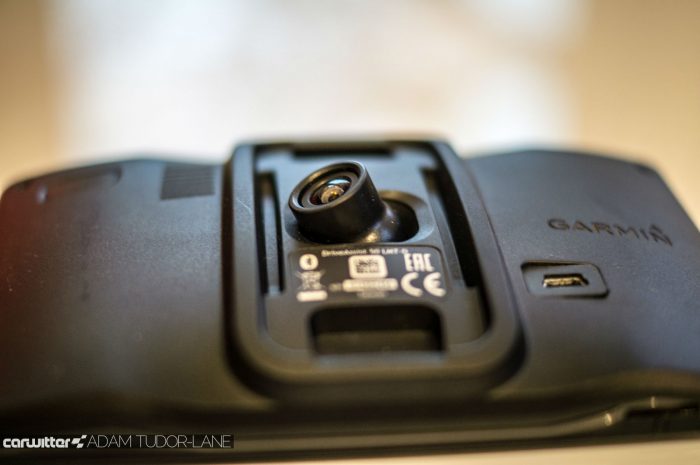 Garmin have outfitted its 50 line sat nav with a dash cam at the back. It starts recoding as soon as you switch the sat nav on. It also provides you with collision warning and lane departure warning, handy. 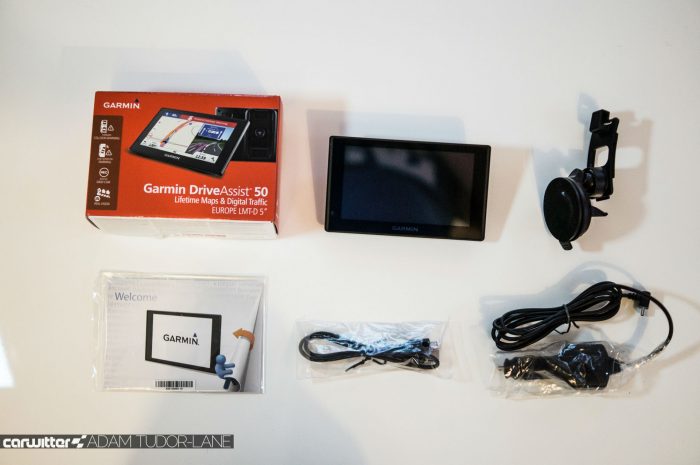 You get 2 microSD card slots, one for the dashcam footage and another to update the device if need be. 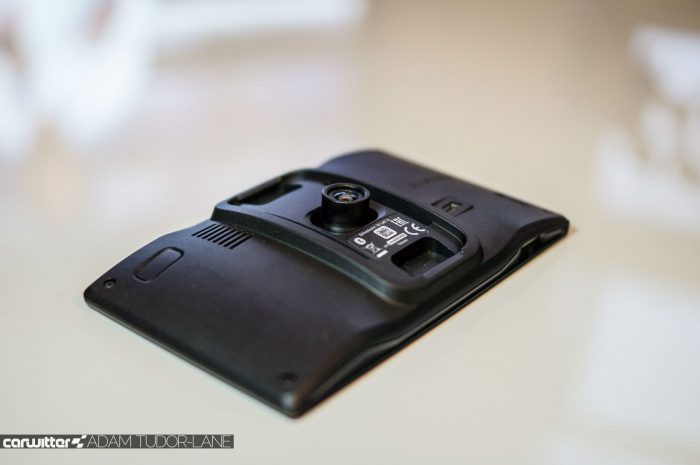 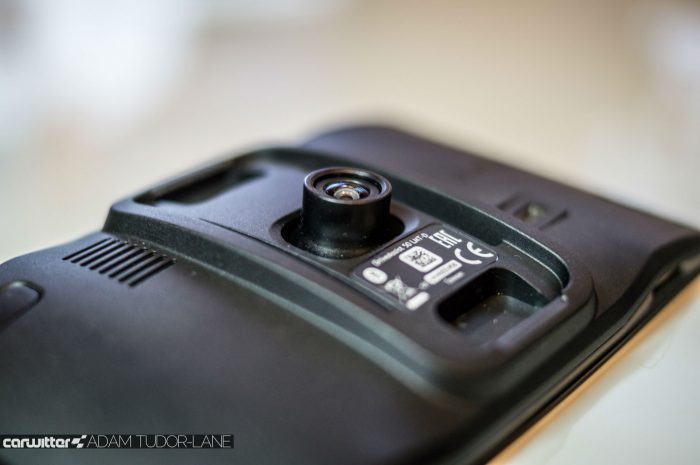 The forward collision warning kicks in above 30 MPH and makes an audible sound if you’re approaching the vehicle in front too fast, you can adjust the sensitivity to make it less twitchy.

Lane departure warning starts at 40 MPH, and you can also get an alert when sitting in traffic if the car in front starts moving off.

Lifetime maps are included, along with a 4GB microSD which should be good for just about an hours’ worth of driving, after that it will overwrite the oldest footage. 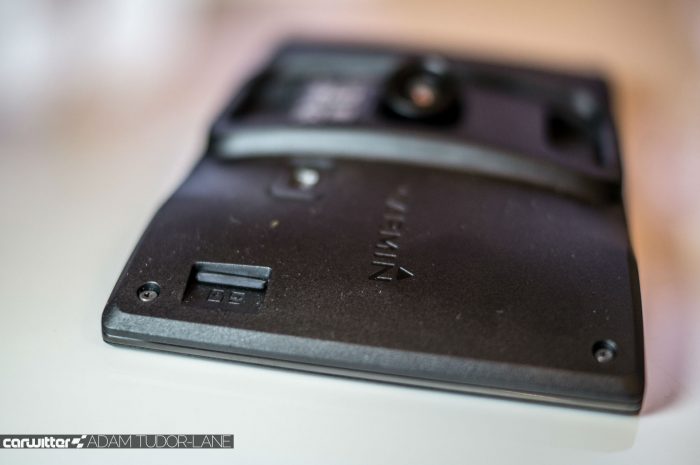 The sat nav has a built in G sensor to monitor any mishaps that might occur and the unit can also warn you of corners, safety cameras and if you have been driving for too long.

The full product spec can be found Amazon.

Quick! Compared to TomTom’s latest offerings the Garmin boots up in nearly half the time. Once it’s ready you can access the menus and the map loads straight away, more than can be said for a TomTom unit. 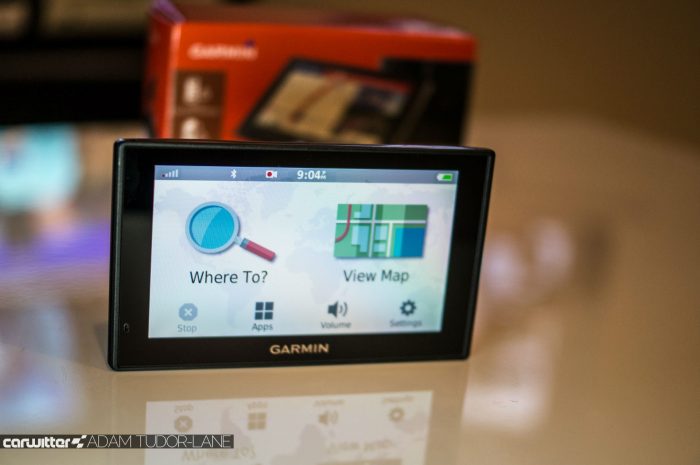 To mount the DriveAssist you have to use the frame like suction cup the allows the dash cam to slip through it. You can mount it wherever you like on your windscreen, bottom right (as always) was perfect for us.

Running through the cam’s set up menus was a breeze and enables the intelligent lane assist gubbins to work as it should. 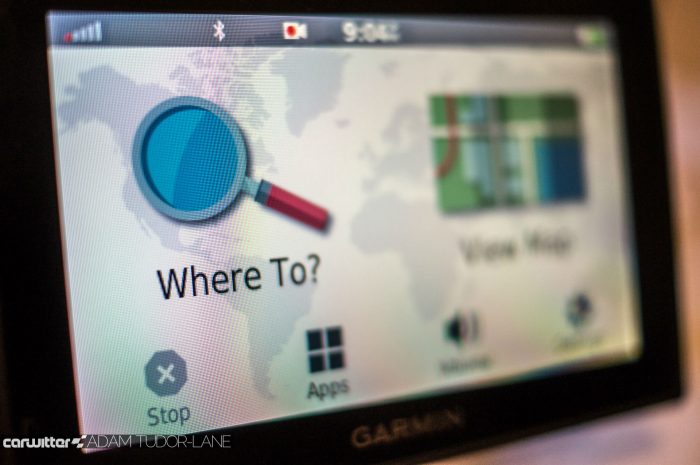 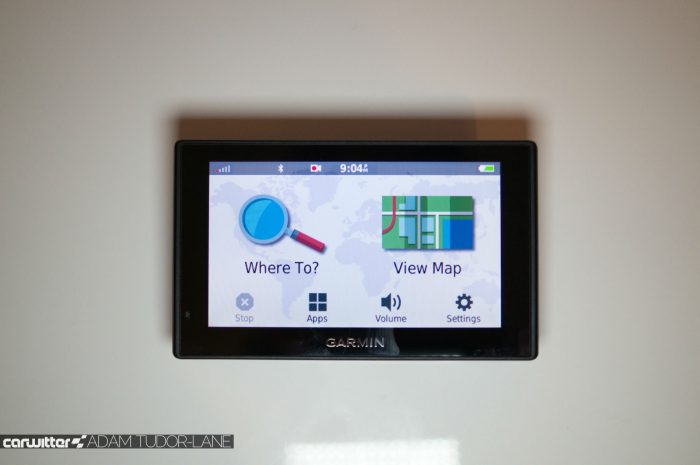 Video quality is pretty good, even for the slightly lower 7Mbits/sec recording rate. You also get your location, speed, the date and time stamped onto the bottom of the recording.

One thing it doesn’t capture though is the sound, not always needed but most dash cams record that too. It can take photographs too, but these tend to come out really blurred and full of artifacts. 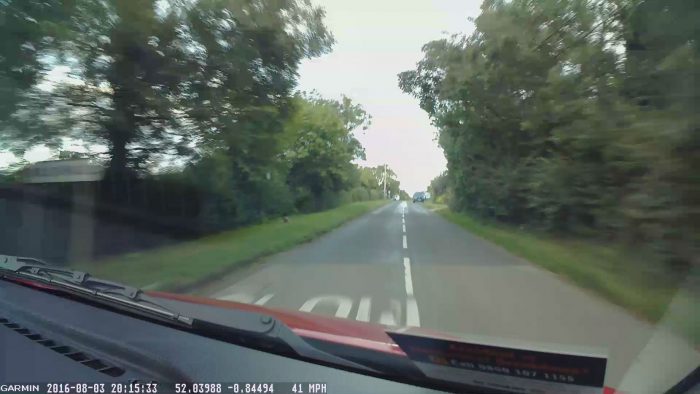 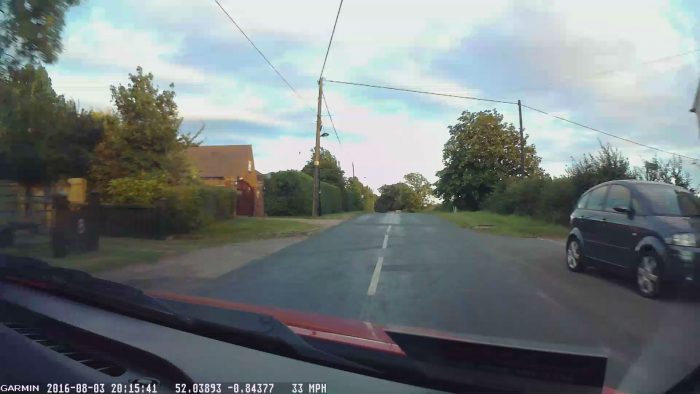 Annoyingly the supplied micro USB cable has the built in antenna for the DAB traffic updates, so it can’t be swapped out for something longer.

It’s also hard wired to the power socket meaning you can’t plug anything else in…a bit of a downfall and something that should’ve been thought of in this day and age. 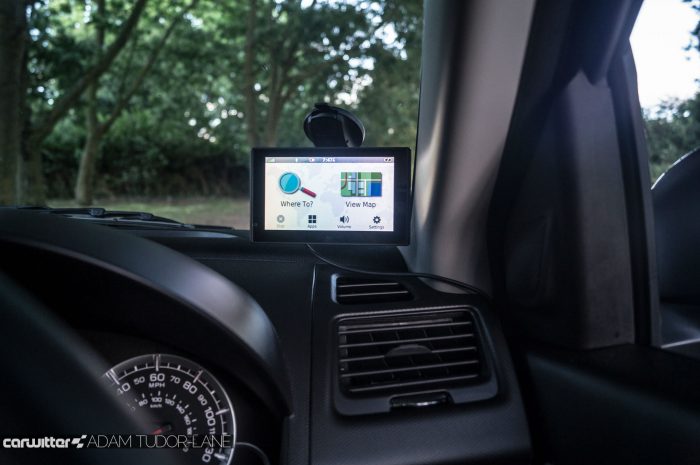 With a bright screen the Garmin’s maps are refreshing on the eyes. It’s by no means the highest resolution, but it’s clear and gives you all the necessary information to hand.

You can opt for a 3D view of landmarks in built up areas which is handy, as well as the normal 2D view. The Garmin also offers a live view using the camera of what junction to take, which is really helpful when you’re unsure on the motorway. 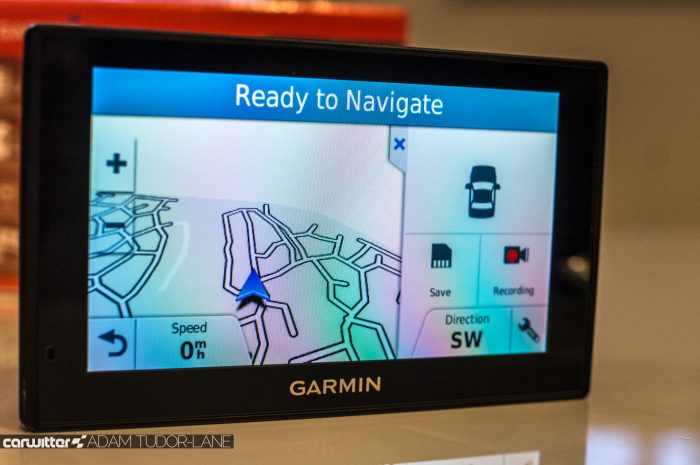 There are a number of different add-ons you can buy for the Garmin, a wireless baby camera, another reversing cam, along with numerous in built apps that can be installed when linking to your smartphone.

Oh, and you can use it as a hands-free kit too. 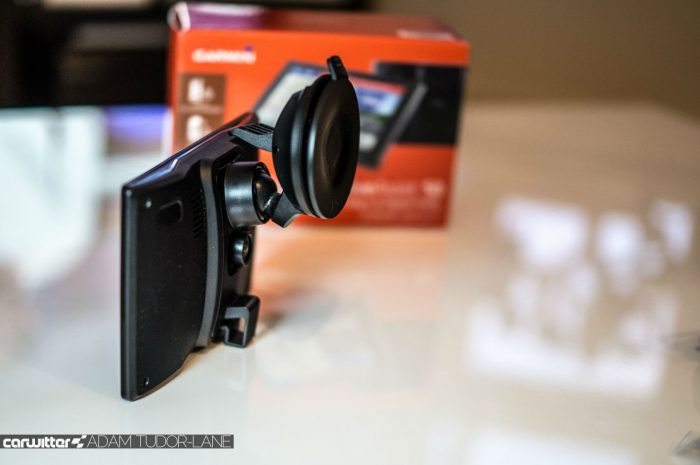 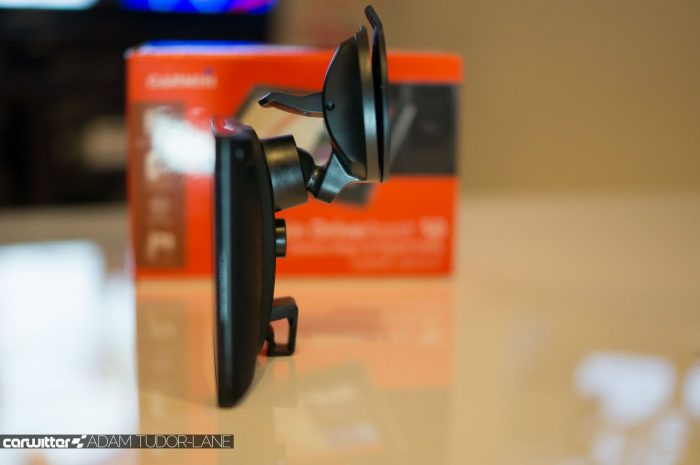 Sometimes clever features don’t always work out the way they should…after 15 minutes of driving with the lane departure warning switched on we had to pull over.

Whilst it may be great for motorways, driving along B roads it was constantly going off. 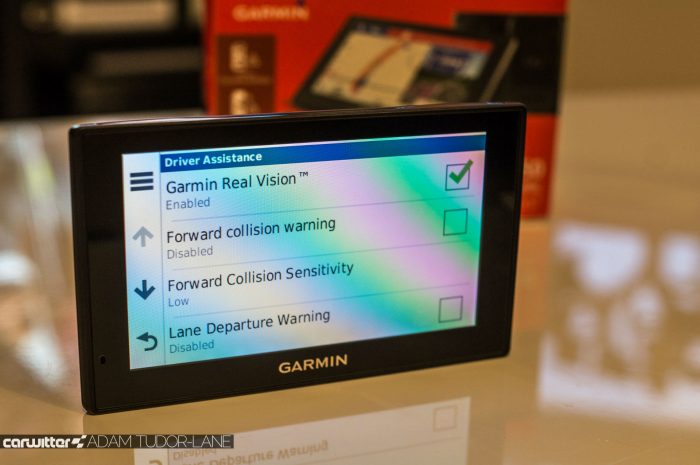 Another odd alert was the one regarding corners. Yup, I’m well aware roads have corners, it would crop up for even the most gentile of curves.

We must say though that the speed camera warning were always spot on and up to date.

All the menus are really fast, you can zip between them with no lag or delay, in fact the whole device feels very nimble. It gets a location quickly and calculates a route with about 20 seconds. 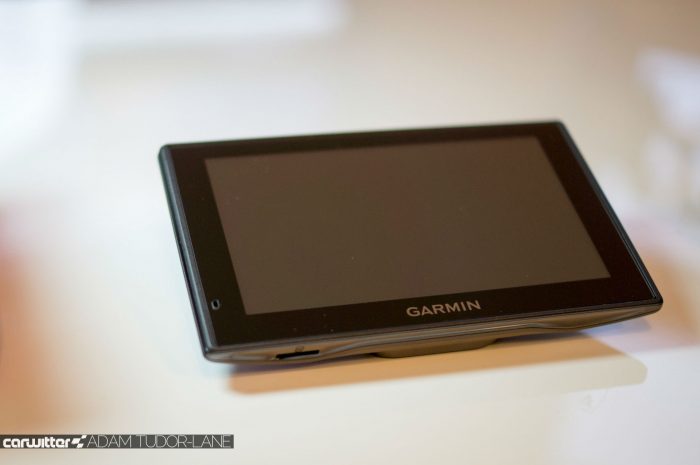 Due to the screen being capacitive touch instead of resistive you get the – now default – pinch to zoom function which works pretty smoothly.

It would be handy if the font size and menus could be reduced, as in some menus it can all get a little cluttered which means a lot of scrolling. 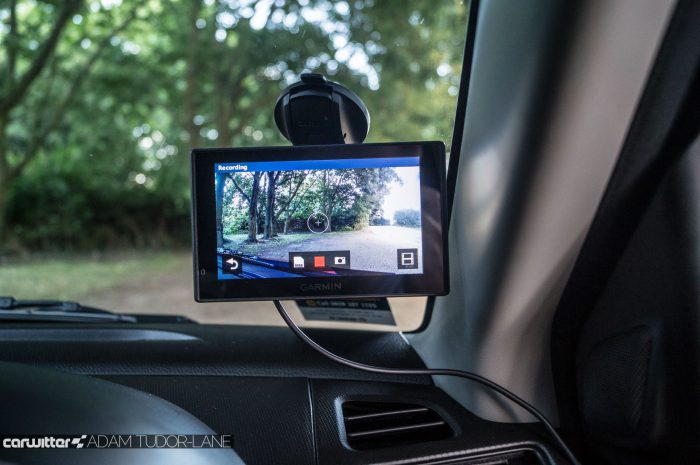 Amazon is probably your best bet, expect to pay around £240. Which isn’t half bad for a lifetime of navigation and a watchful eye on the lookout. 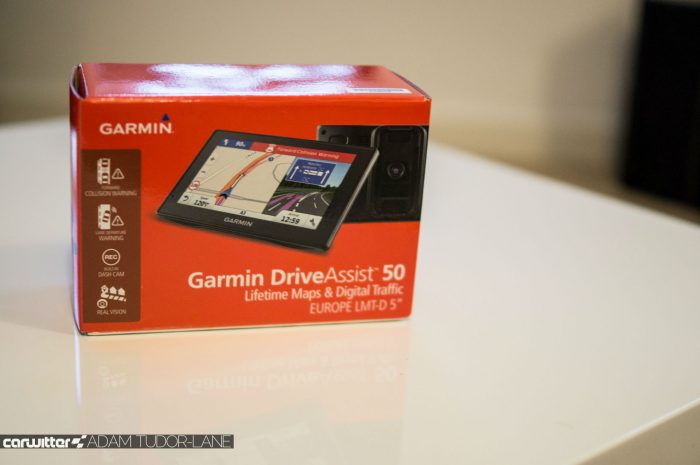