Mazda’s first attempt at a crossover hit the tarmac in 2012, 5 years later and it’s time for a replacement. With Mazda going from strength to strength over the last few years we headed to a rather wet Scotland to find out how it fairs against the current crop.

When we first saw the CX-5 at Geneva it was sat on its own, garnering very little attention. It looked almost like a facelift, not a whole new, ground up build.

To the untrained eye the changes look minor, but put the cars side by side and you see the radical differences.

There’s a much more assertive, aggressive front face. A pointy nose that protrudes ‘F1 style’ in front of the grille. That grille features cut out sections making the headlights appear to float. It’s all far cleaner, Mazda have gone down the ‘beauty through subtraction’ route…or so they say…and it’s worked. 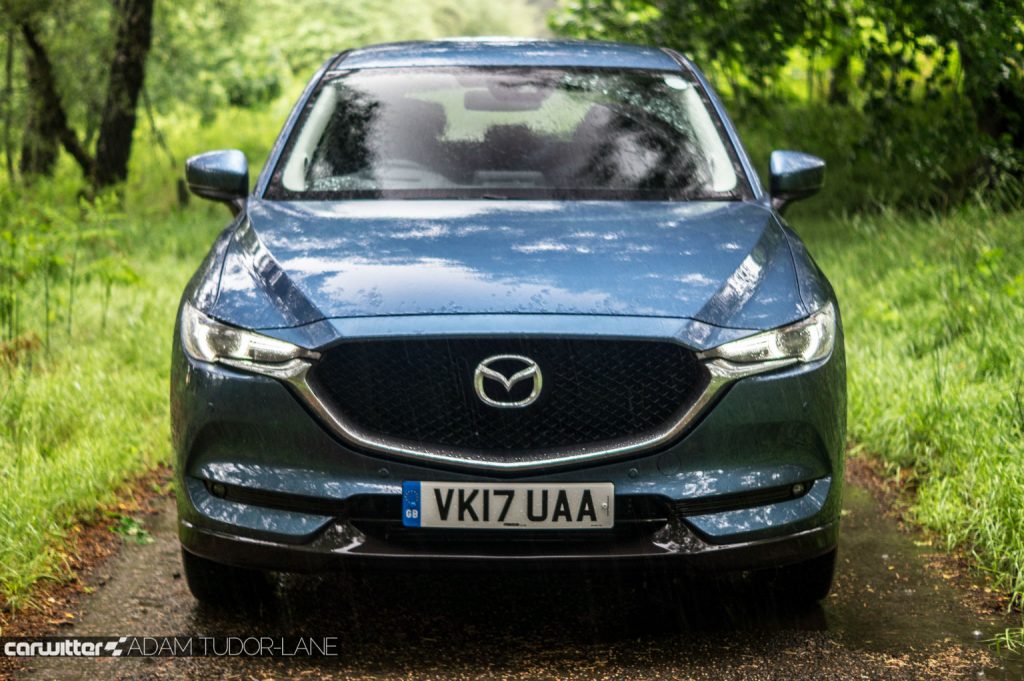 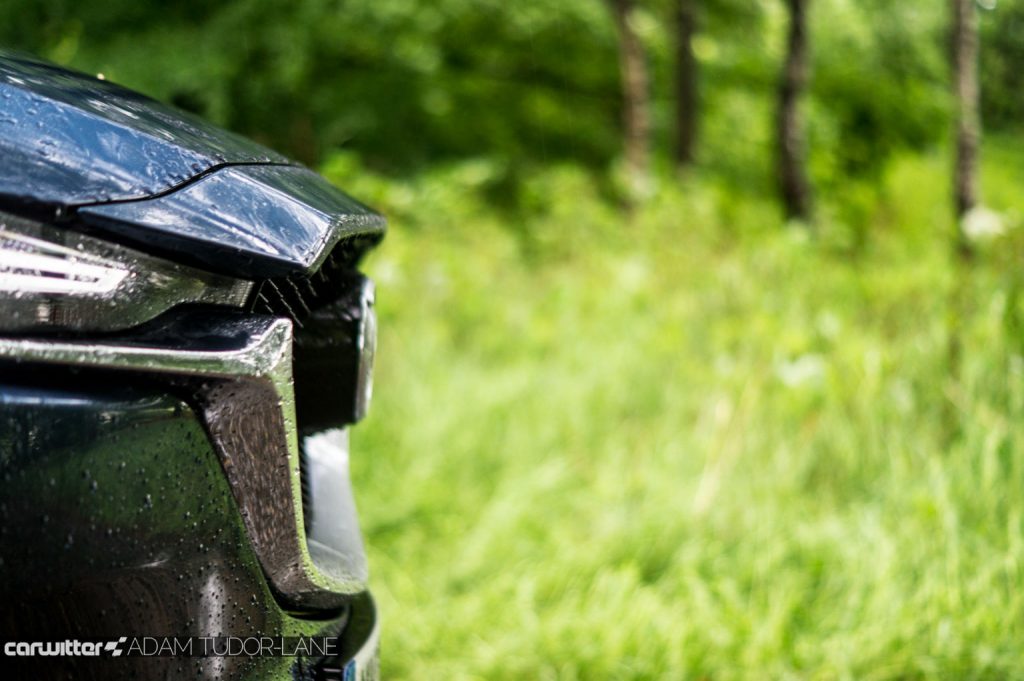 Tipped to be the biggest seller, we spent most of our time in the 2.2 litre diesel with 148 BHP and 380 Nm of torque. It will shove you to 62 in 9.4 seconds, so not rapid but quick enough for the majority.

Refinement in the CX-5 has made huge leaps. You can barely hear the derv lump up front, even under load in the higher rev range the cabin remains a serene affair.

Wind noise has also been cut drastically (another complaint we had on the old model) simple things like moving the wipers below the airline of the bonnet, better seals around the doors, aerodynamically shaped A pillars & door mirrors.

Mazda have had a real tour de force in the noise reduction department and it’s paid dividends! 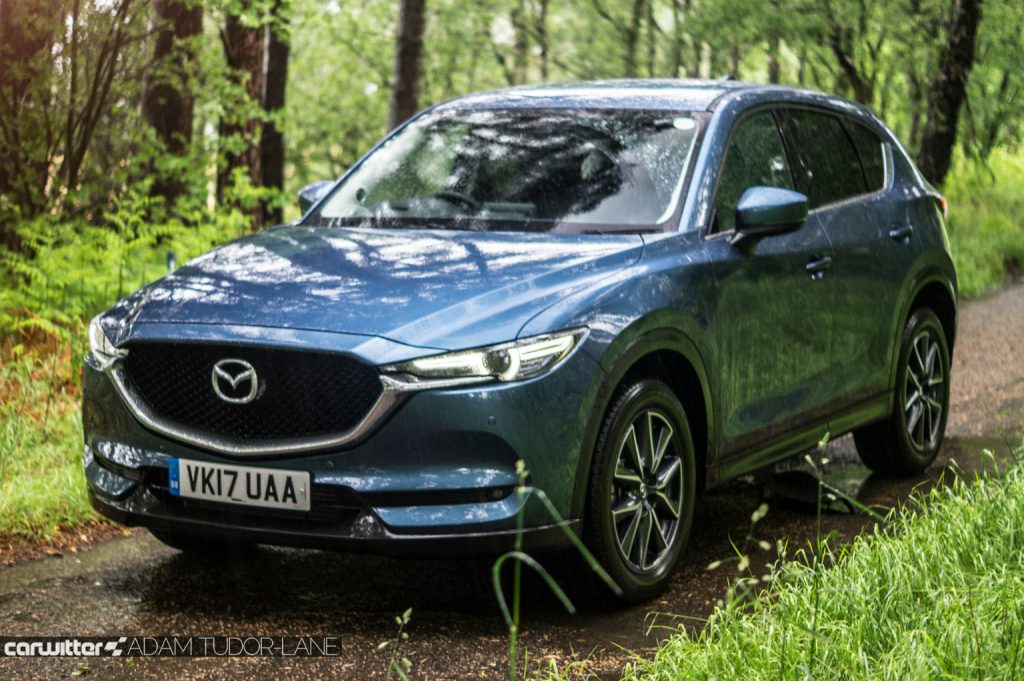 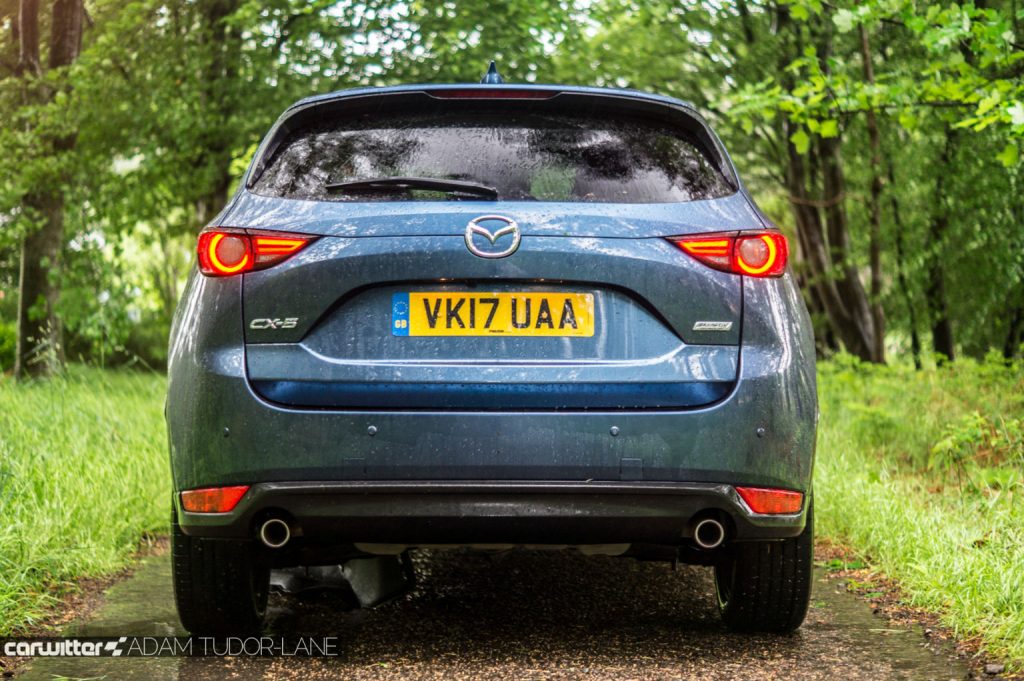 148 BHP is adequate in the CX-5. You will have to work the gears a bit more, knocking it down a cog when you come to an incline, or wanting to overtake with a bit more gusto.

If you need some extra poke you’re best off opting for the 173 BHP variant.

It can only be had with all-wheel drive, which is a shame as it bumps the total price to just over £31k, and it can only be had in range topping Sport Nav trim. But those few extra horses and torques make a real difference, even though it only drops the 0-62 time by .4 of a second. 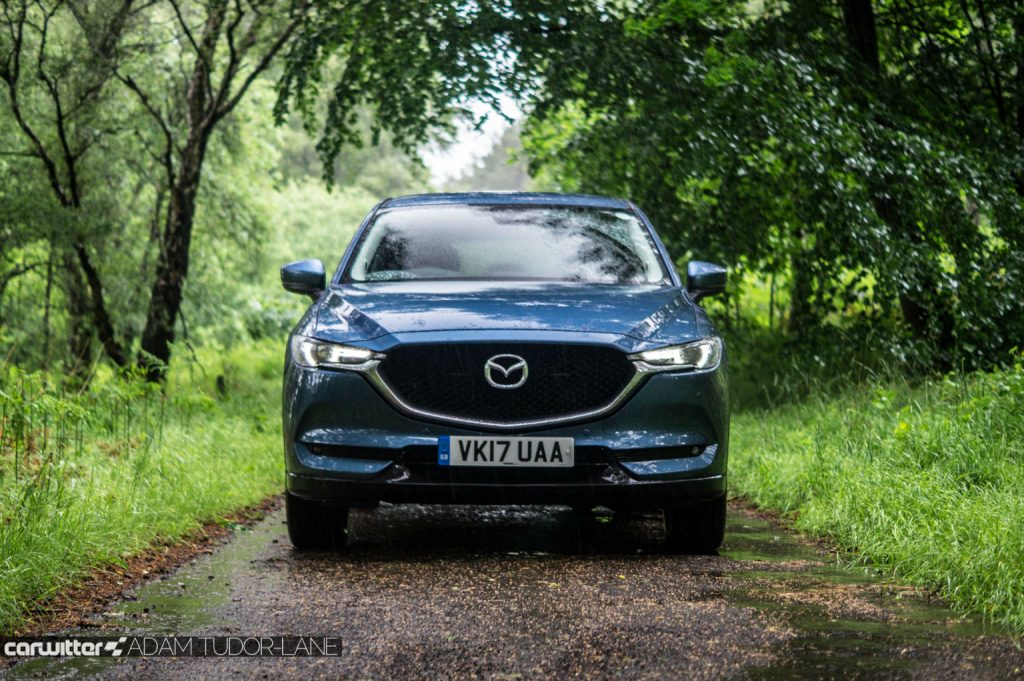 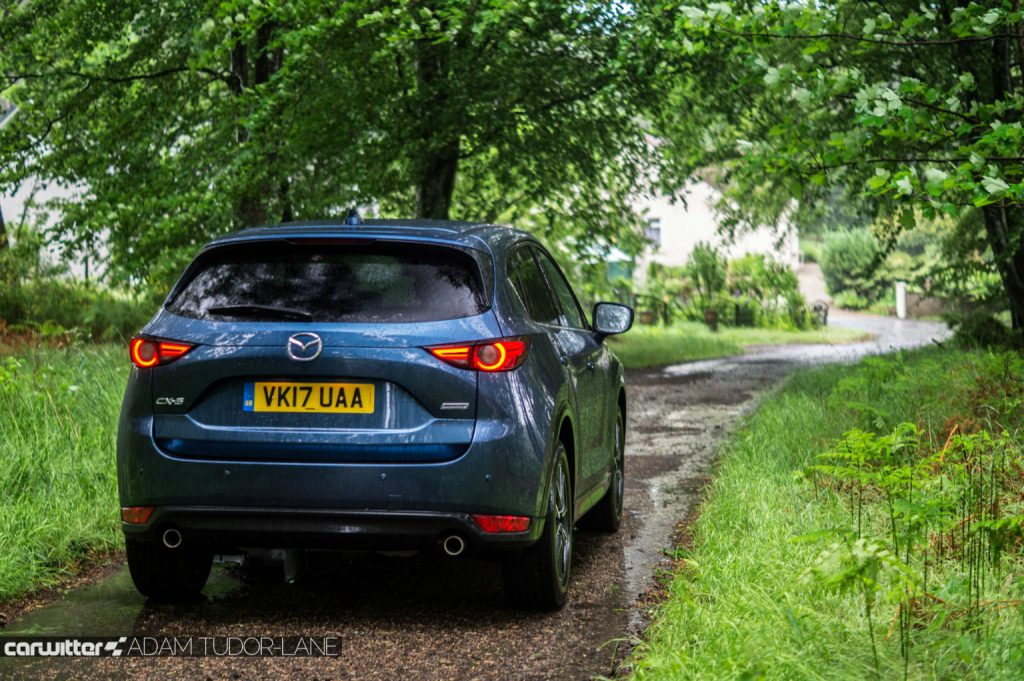 All wheel drive in the CX-5 is confidence inspiring. Pressing on for two hours through the very worst the highlands could throw at us, we managed to keep a good pace through torrential rain and gales. Carving across standing water and flooding roads the CX-5 stayed sturdy, never faltering beneath us.

Handling is spot on as you’d expect from Mazda. Once again it doesn’t feel like a big car.

The CX-5 is nimble, hiding its upright crossover nature like you wouldn’t believe. Granted, the ride is firm and over troubled sections of road the large 19” alloys on the Sport Nav trim make the Mazda jostle around a little.
We didn’t sample the smaller 17” wheels on the SE-L Nav, but as usual we suspect they would fare better in terms of masking pock marked harshness. 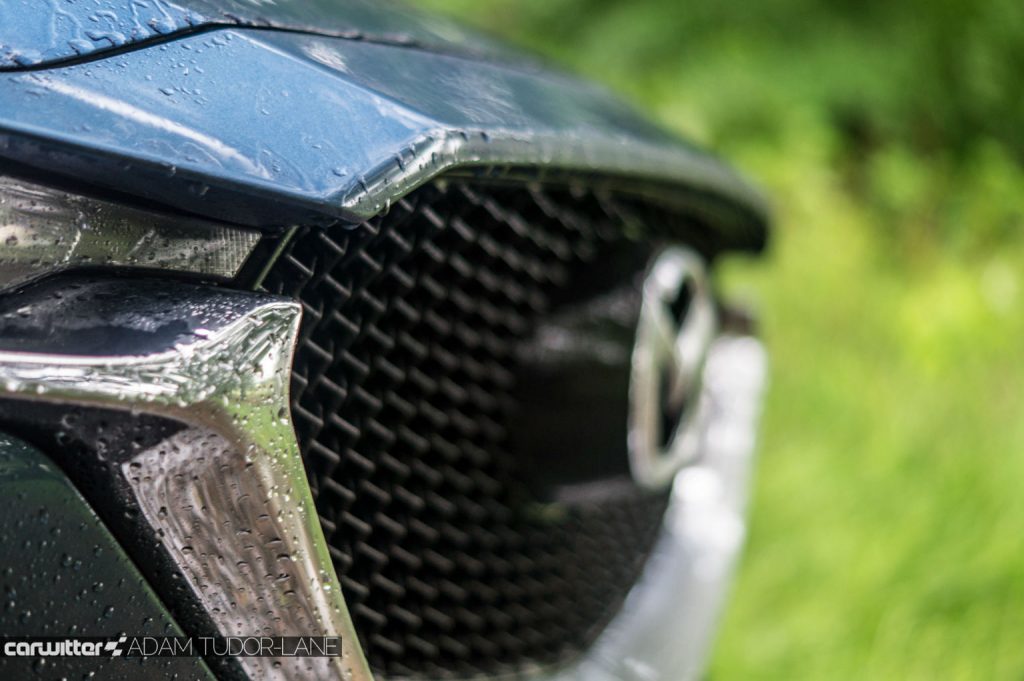 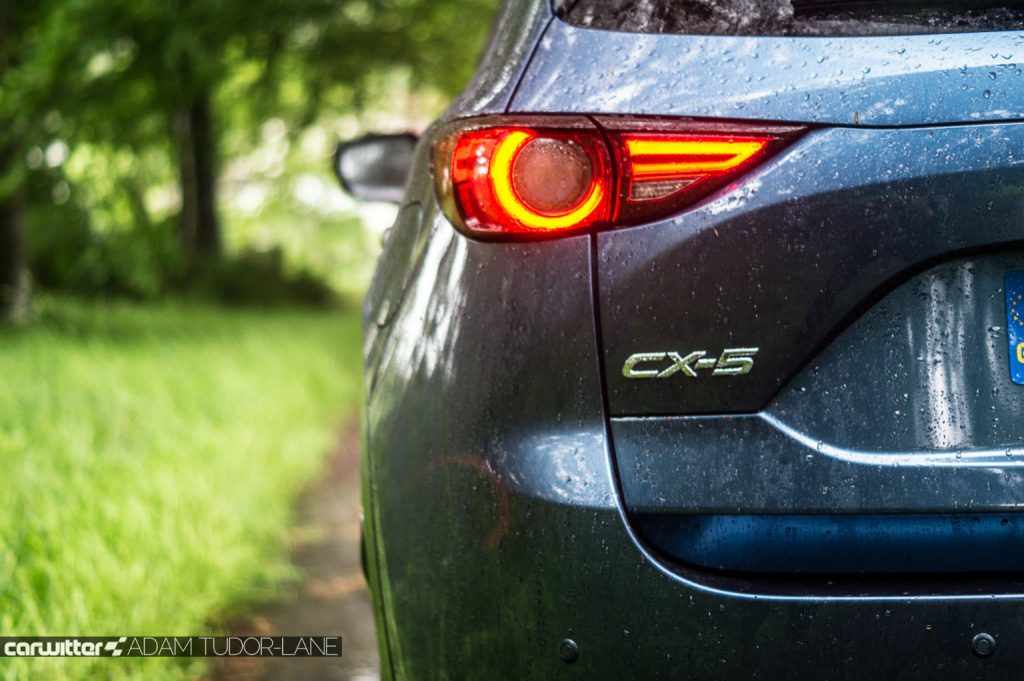 Steering wise, the CX-5 is rather on the light side. Mazda seem to have gone from one extreme to the other over the older model. Slightly heavier would be welcome, but you can still wield this CX with accuracy along twisty B roads.

As for the gears? Well, the manual box is superbly slick, feeling almost MX-5 in the way its short throw slips between the cogs. 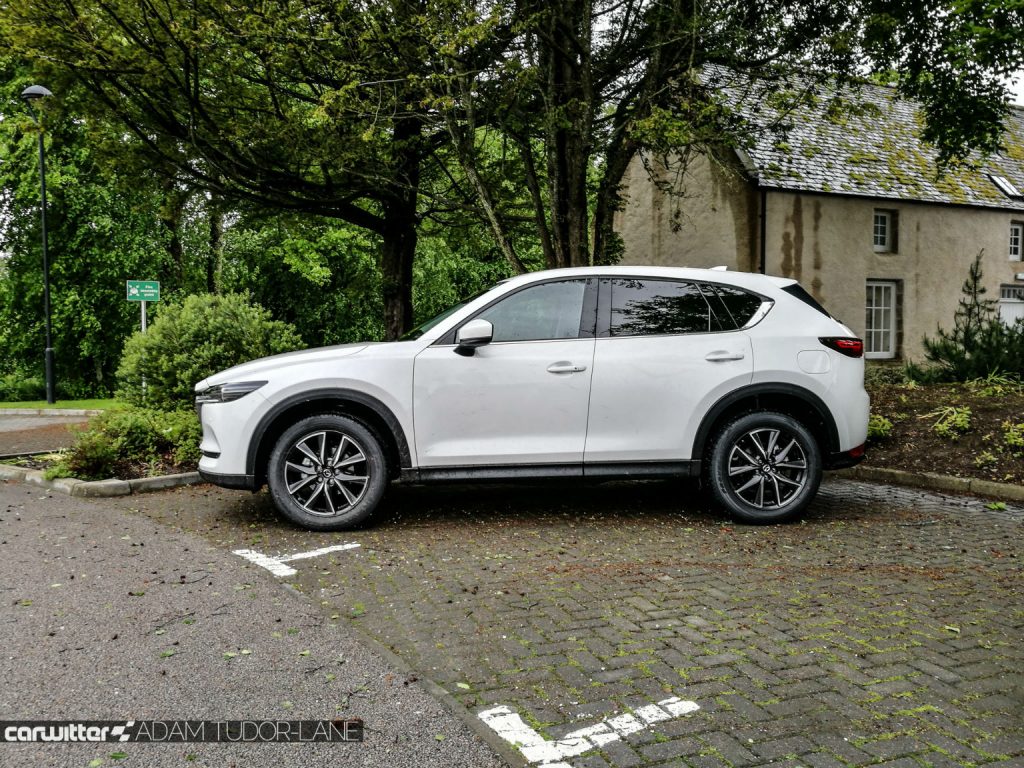 Thankfully all those dated orange LCD displays, that were stuck behind thick plastic have been banished. This is all new Mazda inside, and it feels good, really good in fact.

Leather adorns the dash and upper doors, all the touchy feely bits are suitably premium.

The now standard 7” infotainment screen sits atop the main stack, dial controlled from just behind the gear stick it’s easy to use. The menus can get a little deep when on the move, but all the basic functions can be had at with ease. 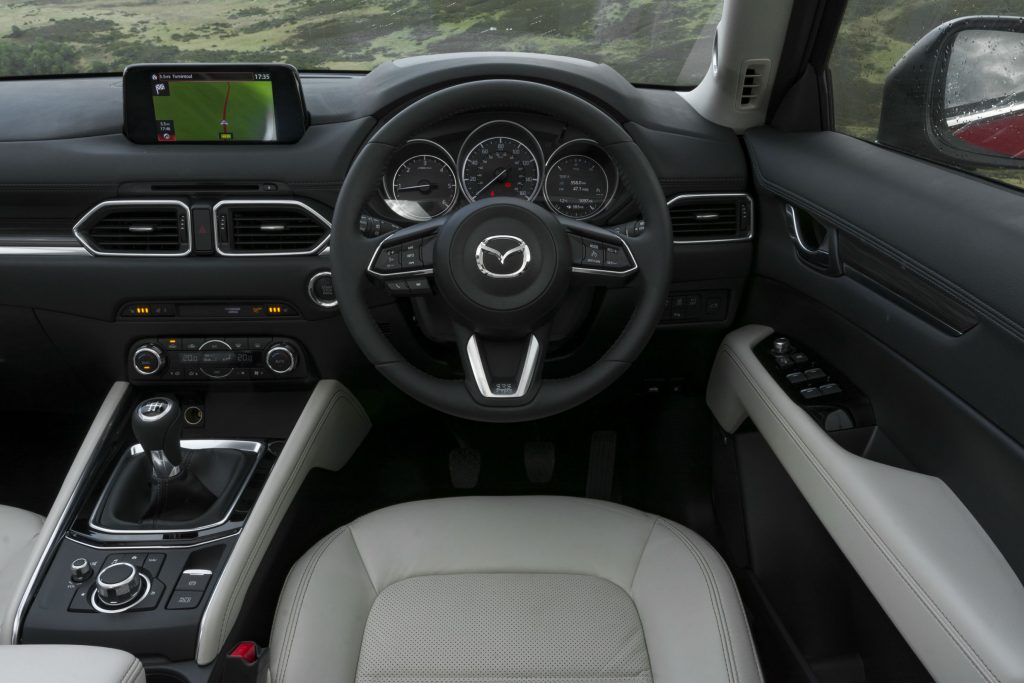 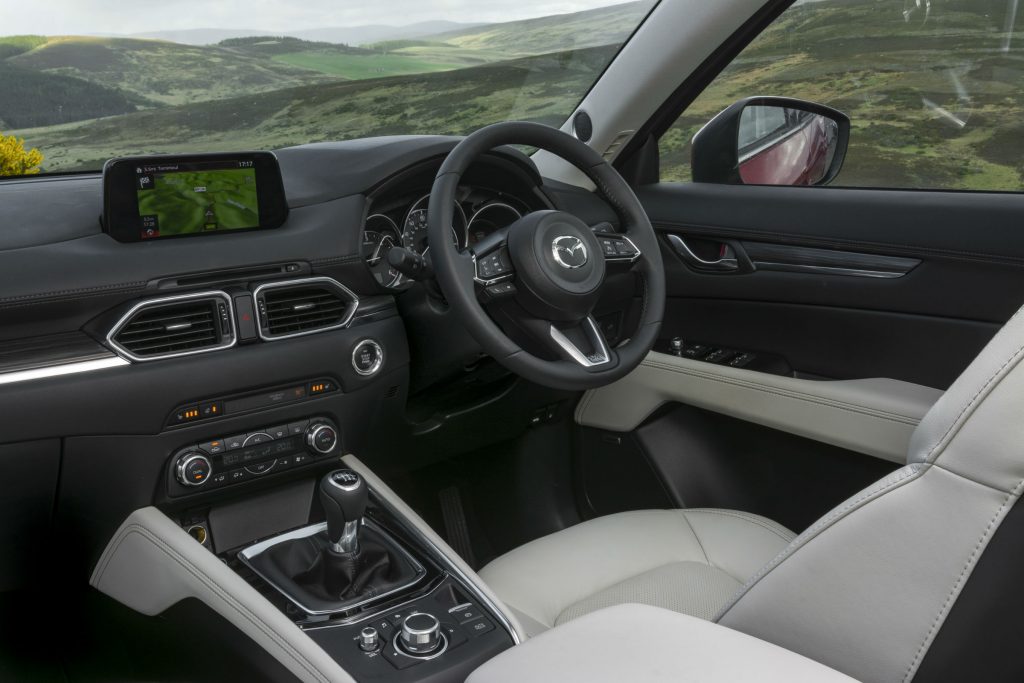 Across the dashboard sits some pseudo wood, plastic trim with a slight gold inlay. It’s meant to reflect a Samurai sword…not sure about that, but it does look smart.

Moving on to the dials and the third on the right is a fully LCD affair, showing everything from current fuel, MPG to lane guidance warning which matches the colour head up display on Sport Nav variants. 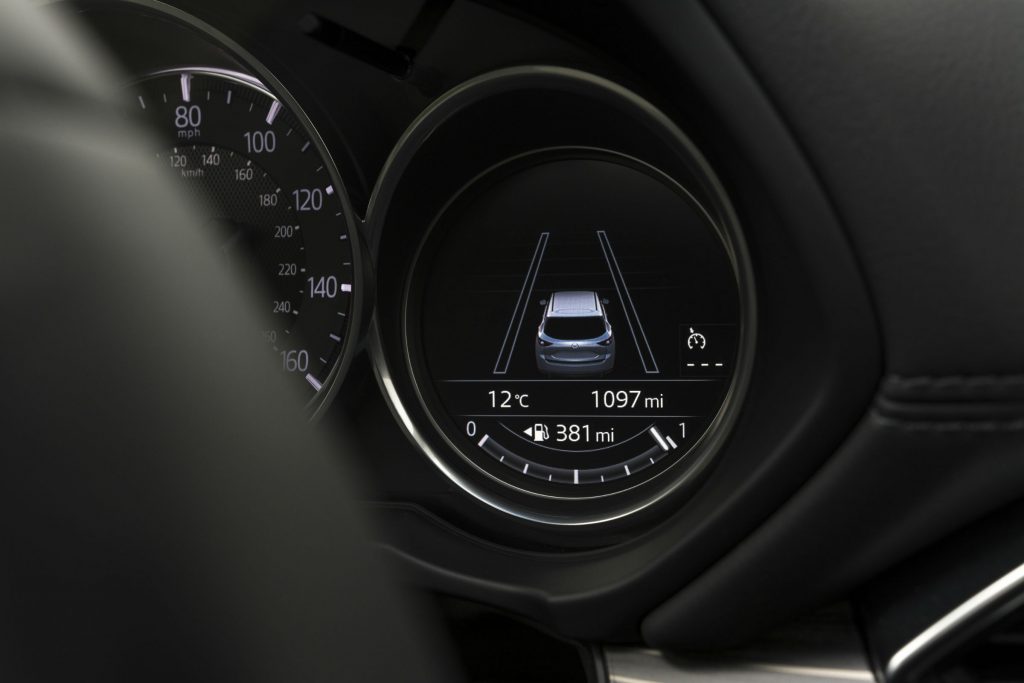 The heating controls have also seen a full update, the new ones are clear and simple with nice modern fonts and dials. All of the controls sit low down in the cabin to keep the dash as clear and driver focussed as possible.

Rear seat space is very good, even if the new Kodiaq is slightly roomier, whilst the boot space measures in at a decent 500 litres. 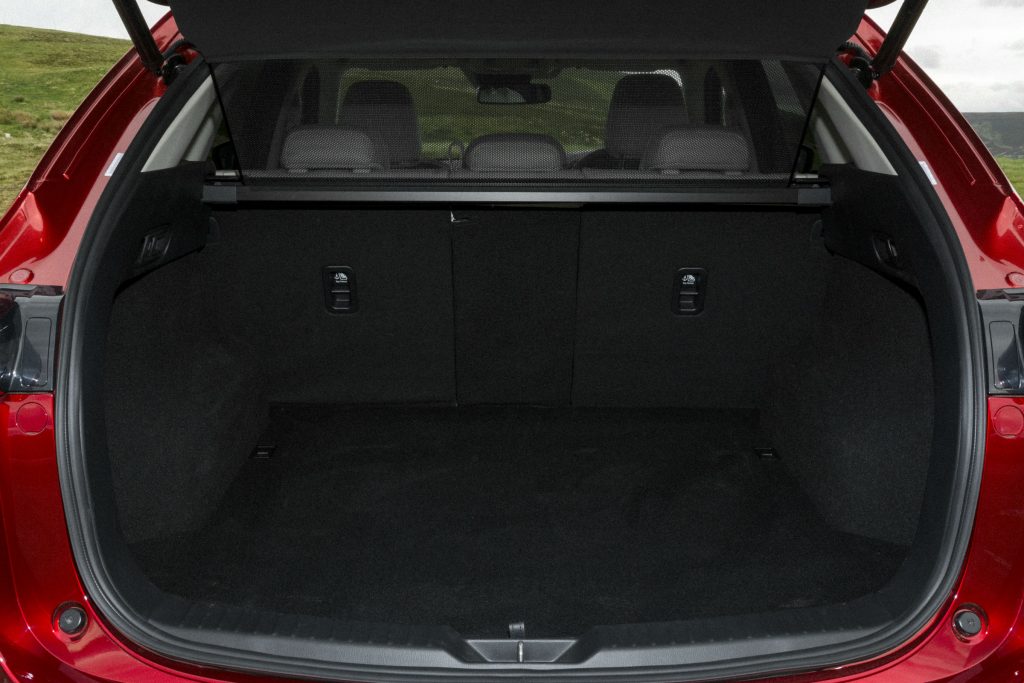 Mazda have reaffirmed the CX-5 as a top notch contender for crossover king. It may not feature on everyone’s radar, but it certainly should on handling alone.

It’s a far more engaging drive than the Qashqai, and with decent kit for the entry level SE-L starting at £23,695 the CX-5 is comparable too.

So you’ll need to add an additional £800 to the cost to benefit from what’s rapidly becoming standard fodder these days. 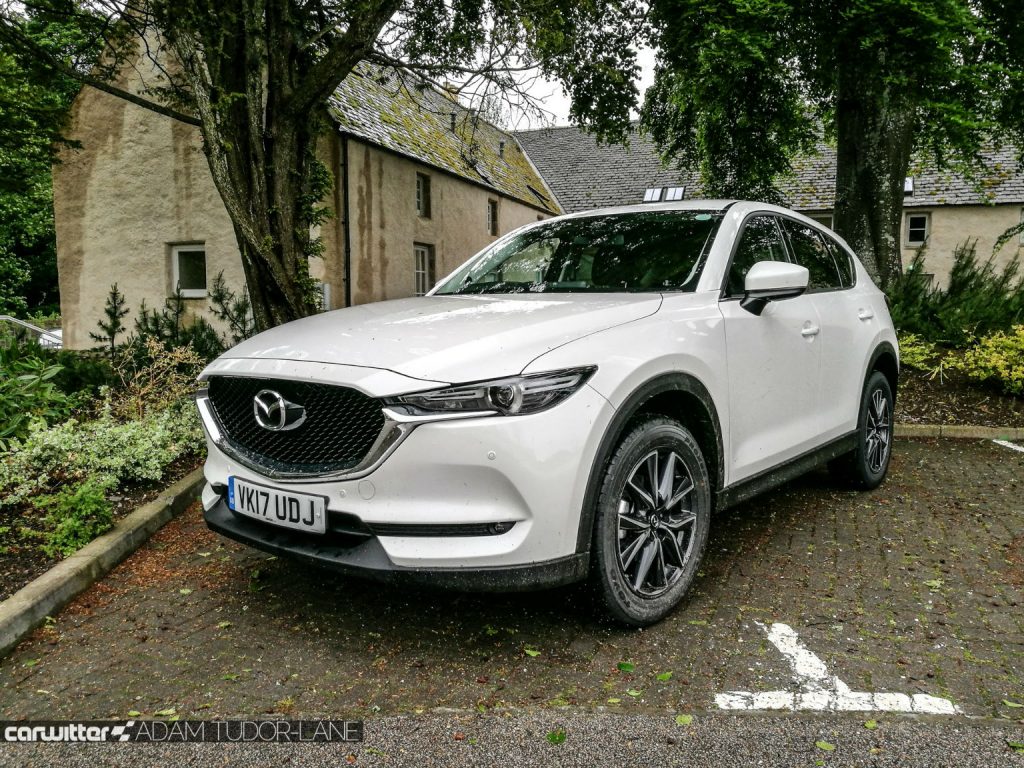 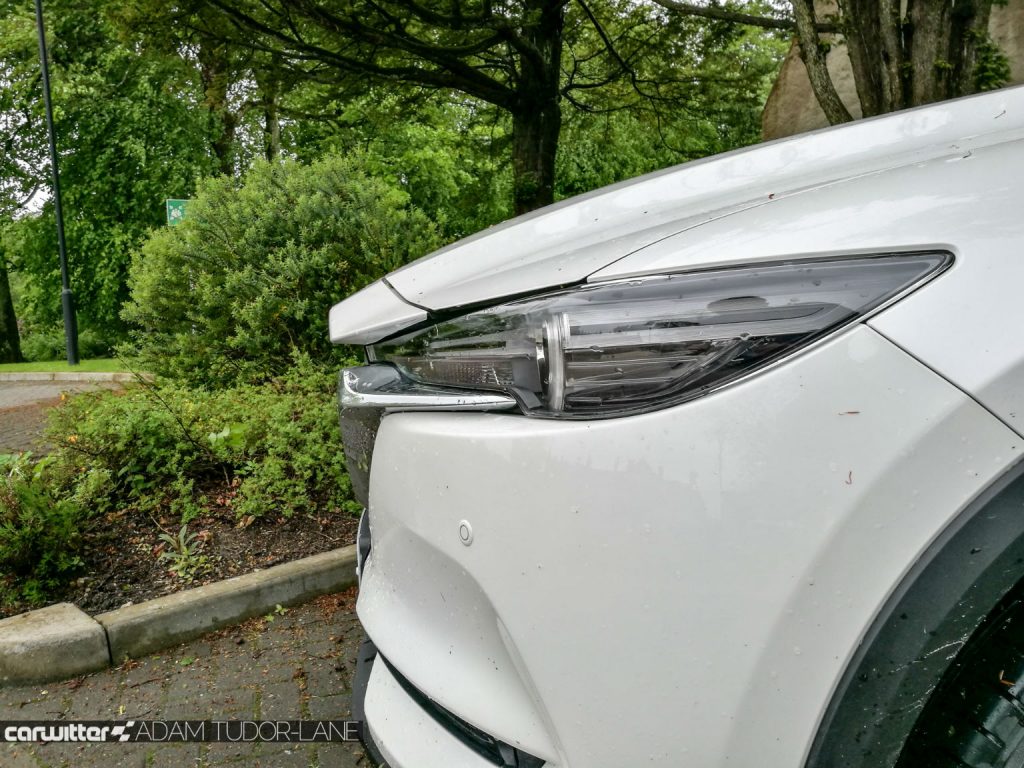 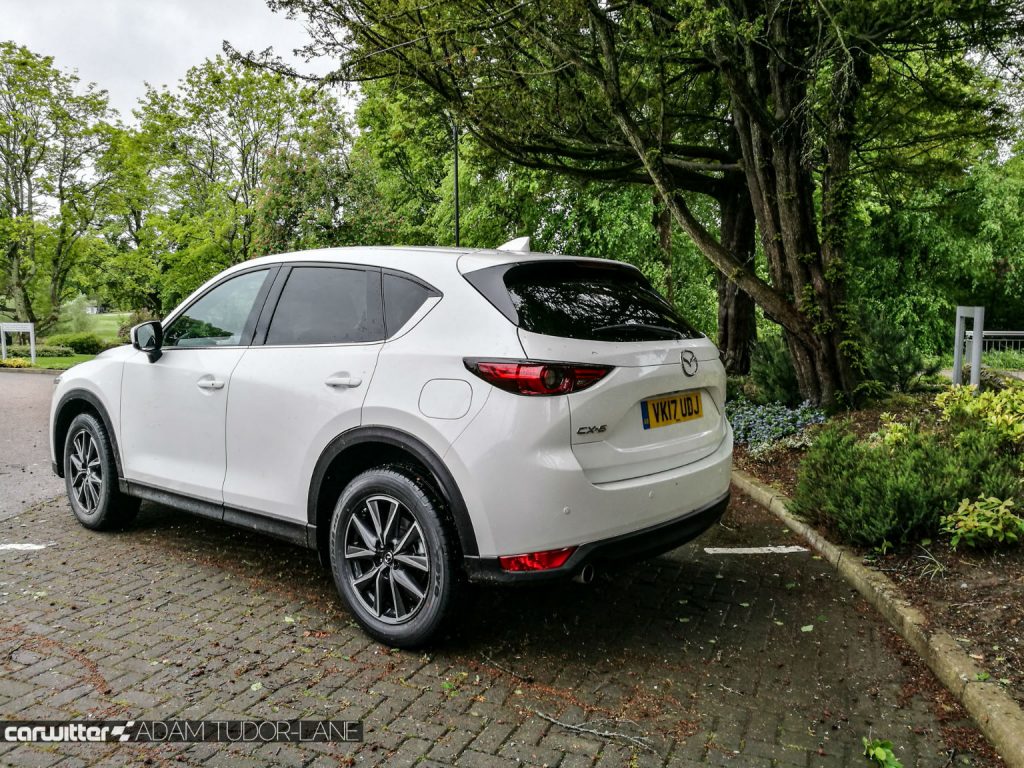 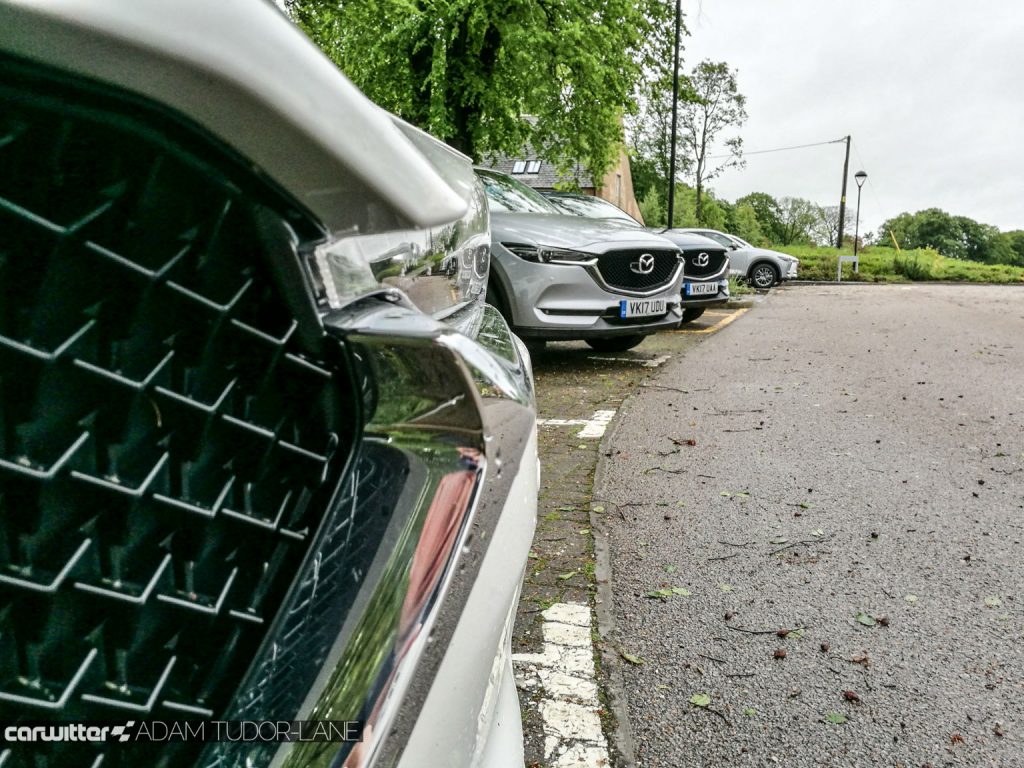