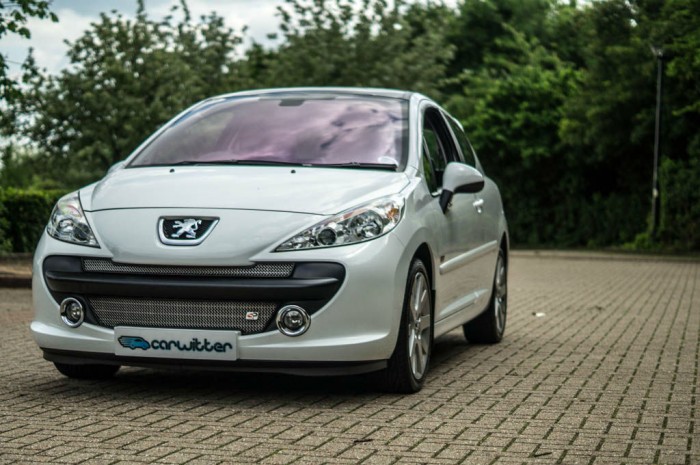 I’m going to try and explain how I am so in love with my car, for non-petrol heads (and even some petrol heads) you may not understand how you can have such a connection with an object.

One film that sums the whole thing up brilliantly is Love The Beast, watch it if you haven’t, or if after reading you still don’t get it… 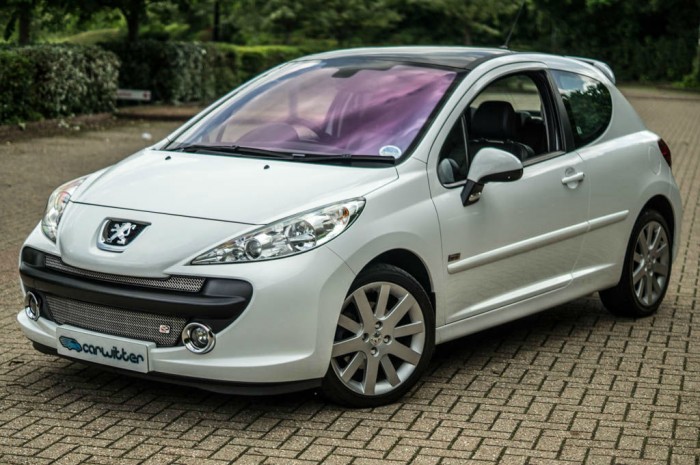 For the previous two years, since the age of 19 I was used to rolling around in a top of the range SRi Vauxhall Vectra. I had covered thousands of miles in it, and it was a very nice car…but as a company car it wasn’t mine and it didn’t really hold any special value to me. I think I only washed it myself on a handful of occasions!

I wanted something with as much punch and go to it as the 150 BHP Vectra. I wasn’t going to settle for a run of the mill 1.2 Corsa, definitely not! I ended up falling in love with the second White Peugeot 207 GT I saw (it had to be white, I was only searching on Auto Trader for White cars).

It was perfect! 1 owner, with only 9,000 miles on it from new. It was spotless, no scratches, dents, nothing. A perfect example! I had to have it. I paid my deposit and then phoned the bank for a 5 year loan on the majority of the car (urgh!).

Within a month of owning the gleaming white, 4 wheeled, pride and joy I was out of a job. The company was crap, and the boss an arsehole.

So there I was stuck without any wages, a hefty loan and minimal savings. I thought of selling the car straight away, but I was so in love with everything about it, and it was my first real car that i had bought myself. 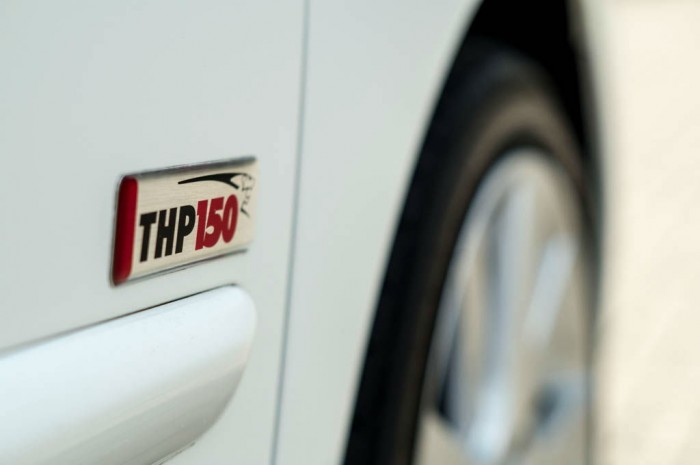 I had been out of work for around a month, when I headed to my local Peugeot dealership to buy something or other for the 207.

The parts guy (who I was relatively friendly with) got chatting. I mentioned I was out of a job and much to my sadness the car may have to go. He then said “Do you know much about cars, I’m leaving and there’s a job going?“.

Now I know enough about cars…i’m no expert, but I can tell you where most parts will go on a vehicle….that’s good enough right? 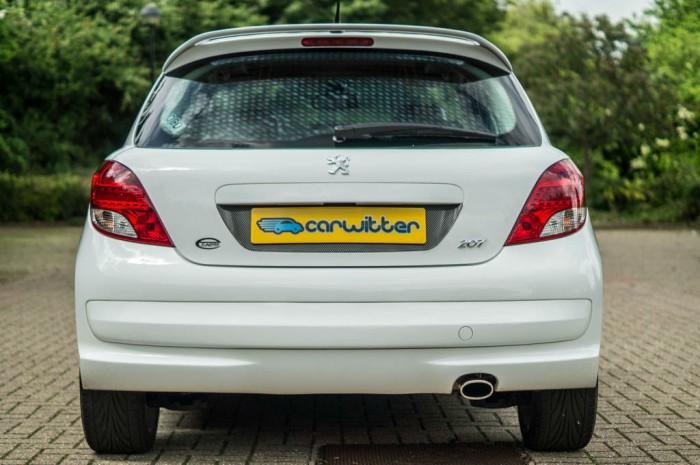 I applied for the job thinking I didn’t stand a hope in hell. The next day I received a phone call from the parts manager wanting to see me for an interview.

Low and behold I ended up with the job, the wages were awful but I could just about keep a roof over my head, and by not saving ANYTHING each month I could keep the lovely white 207 too.

So thanks to the little Peugeot I ended up back in work! 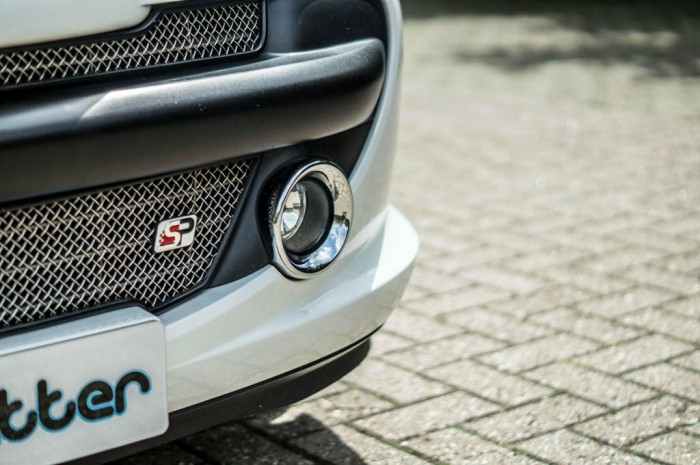 Every weekend I saw my parents my mother told me to…”Sell the bloody thing, it’s a waste of money“.

But I endured…and six months later I ended up back in the IT field I was used to. Wages went up, enabling me to keep the car and save a meek amount each month.

The 207 was used every day for that first year at the new job, a huge 18,000 miles went on it before I ended up with a company van.

Throughout that first year of ownership the timing on the 207 needed to be reset.

This means the top of the engine is stripped down, the timing chain is replaced along with pulleys and tensioners, it’s all set before being put back together. It’s a known issue with the THP engine, luckily I was spared the £1000+ repair cost due to having extended warranty.

Even though this happened I still loved the car, after all it was a small blip and it was now fixed… 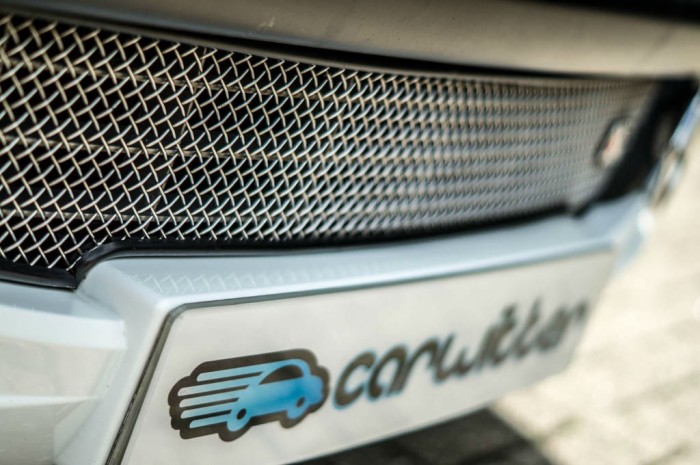 …but this is a French car. The timing has gone twice since. Each (luckily) covered under the extended warranty, meaning I invested that £650 wisely.

So yes the car is temperamental…i’m just waiting for the timing to go again.

The 207 has been there sitting pretty on my drive through all the difficulties I have had, I didn’t give in and sell it. I probably should have as I would now be better off financially, but it was MY first car.

I owe it a lot for getting me that job, if I hadn’t have bought that exact Peugeot 207 I would have been out of work with a big car loan, and probably homeless by now! 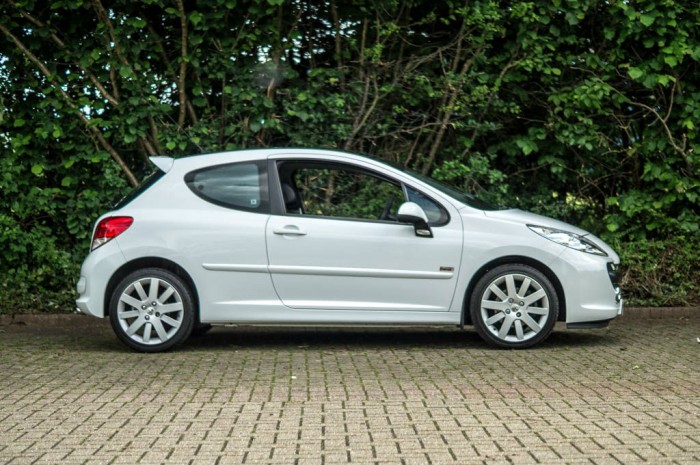 Also through the 207 Owners Club i met a very good friend, and after attending a detailing event with him and the RCZ owners club I was introduced to a member of the Peugeot PR department. This enabled me to attend my first launch (the 208), which ultimately led me to creating Carwitter, and starting on the path to be an automotive journalist.

Without my 207 those two things would have never had happened. I owe it a lot. 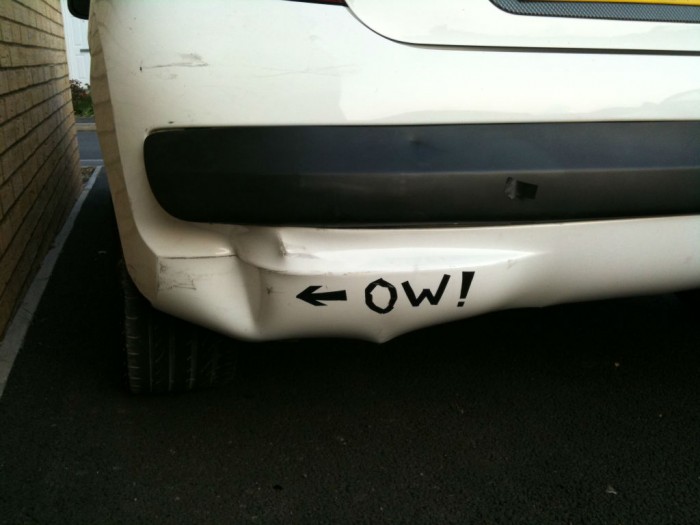 Over the year of using it for the IT job someone crashed into the back of me at a roundabout. I was devastated. Not quite to the extent of tears, but it was rather distressing!

I just couldn’t believe something had happened to my gorgeous, perfect car. For nearly two days i was so solemn and silent, whenever I saw the damage I felt so bad, like it was my fault and I should have been taking better care of my baby.

Luckily it was just the rear bumper that needed replacing, no metalwork was touched, phew! 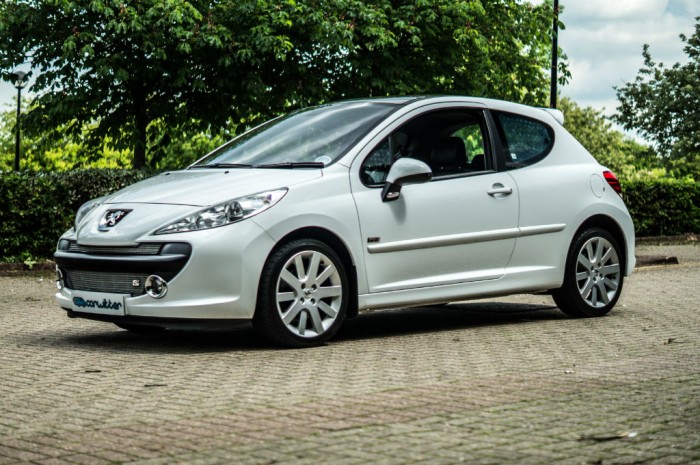 When I park anywhere with the 207, it either gets parked miles away from anyone. Or if i’m not going to get a ticket, it gets parked smack bang on the white line taking up two spaces.

Why do i do this? Because currently I have spent a good £600 in having dents pulled out through inconsiderate cretins opening doors onto it. I have always parked in sensible places, but morons still seem to end up denting it!

The last time I noticed a dent I called my dent guy straight away, within an hour I was £100 lighter…but the car was dent free. I can’t stand having a dented car. 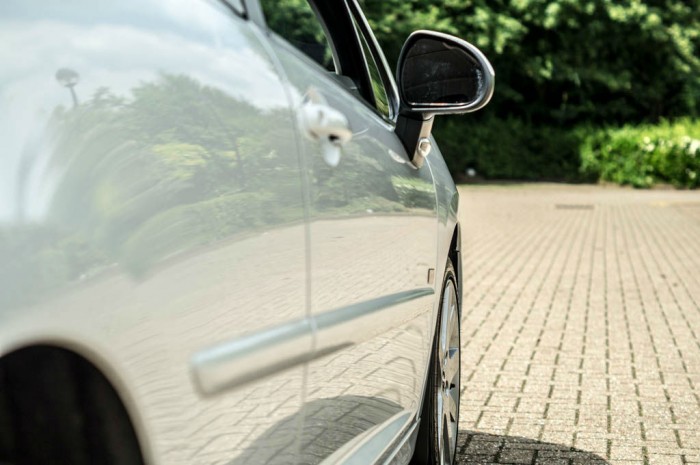 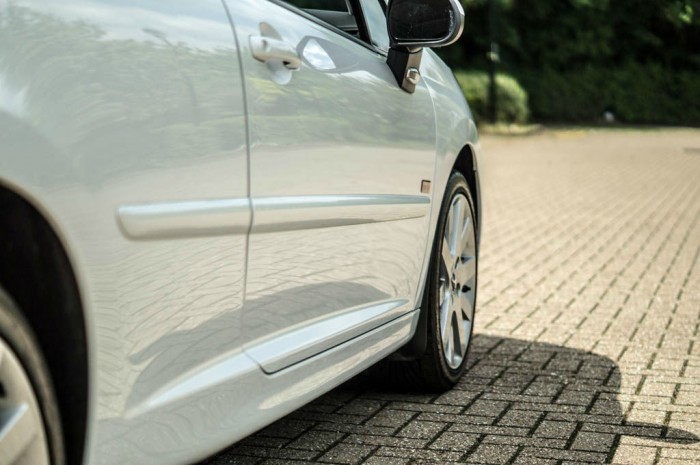 Currently the 207 hardly gets used, as I am fortunate enough to have press cars regularly. I should really sell it. But i cant.

If i was to sell it, I know it wouldn’t be looked after the way I look after it. The next owner would take it through the car wash, they would thrash it, they would park it next to every other Tom, Dick and Harry, if it got dented they would leave it, they wouldn’t spend 5 or 6 hours meticulously detailing it.

If I did sell it I would probably never see the car again, but I know in the back of my mind that it wouldn’t be looked after, and cared about to the level I do…and that upsets me, rather a lot…sad eh? 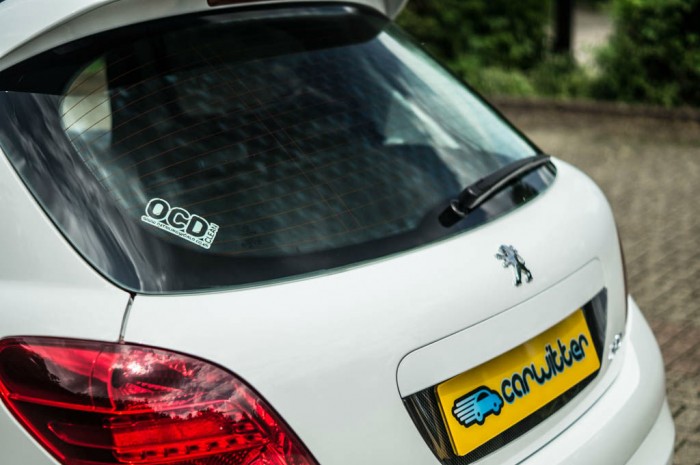 So what am I going to do?

The plan for quite a while now has been to finish paying for it, and keep it…forever. I will drive it for around a year or so after it’s paid off, then look at getting a new car. By that time I will hopefully have a garage where I can store it. It will then be used occasionally. Will it be a classic? I’m not sure, probably not! But I can’t bear to part with it.

The only thing that would make me get rid of it is if the timing keeps going wrong while out of warranty, or – god forbid – it gets written off. If the latter happened i’m pretty sure I would be in tears! Pathetic i know. 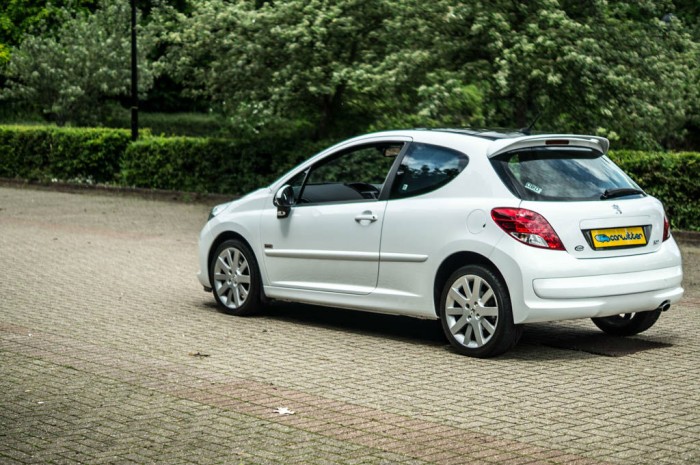 Whenever I drive it after a weeks’ break I fall back in love with it again. It’s not the best car in the world, (and I now know I should have probably bought that white Suzuki Swift Sport I was looking at) It has its creaks and rattles, it crunches under acceleration from first to second, it’s rather on the portly side and handling is…well, reasonable. But i’m still very much in love with the white French lion.

To this day my mother tells me to sell it, my dad seems indifferent and kind of understands that your first car is a big deal.

If you still don’t understand the connection, I urge you to watch Love The Beast and let Eric Bana explain it to you. 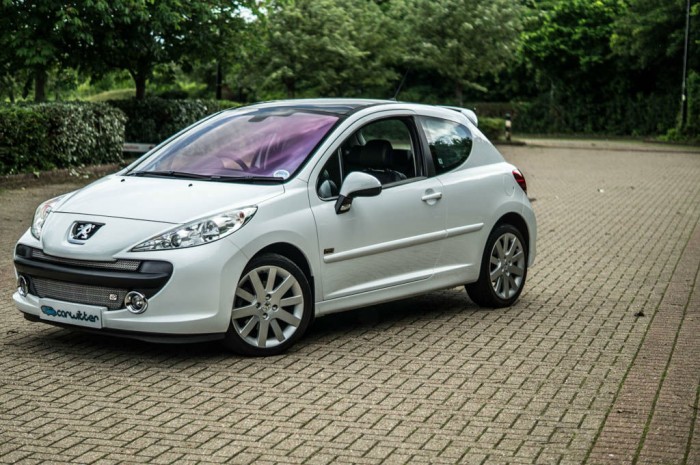 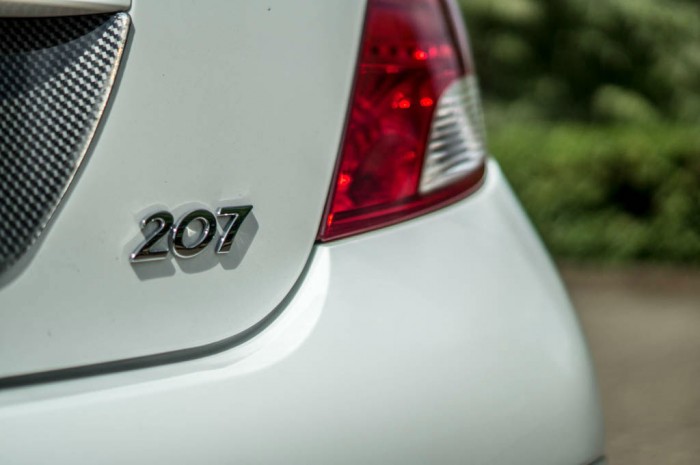 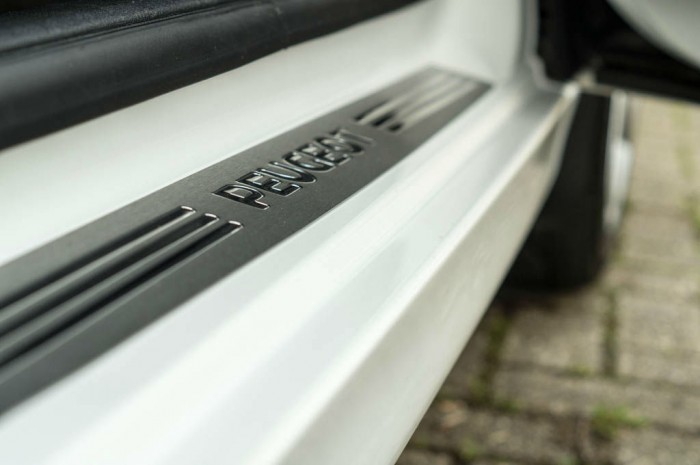 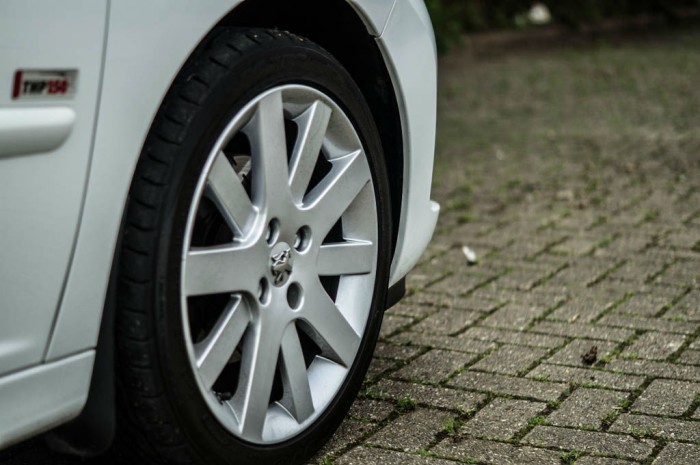 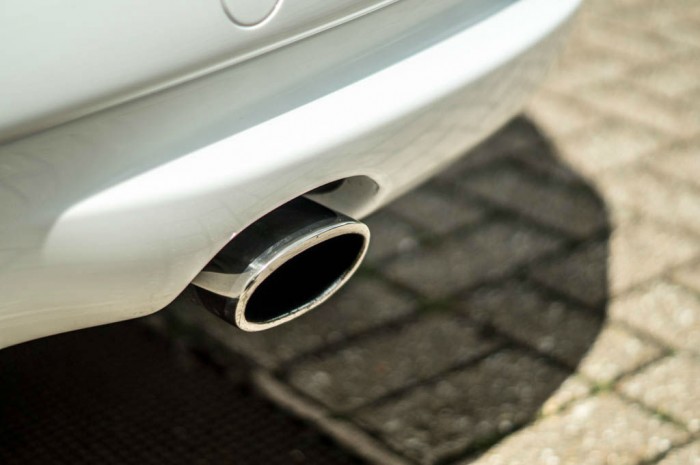