Peugeot has become the latest marque to join the stable of manufacturers producing a Vision Gran Turismo concept for Sony PlayStation’s GT6.

Over the past 18 months, numerous car makers have created concepts for the game to celebrate its 15th anniversary and the latest newcomer certainly doesn’t disappoint.

Power is delivered through a six-speed manual gearbox to all four wheels. 0-62mph is dispensed with in less time than it took to read this sentence (1.73 seconds).

Brakes are ventilated carbon Brembos (380mm front, 337mm rear) to match the breathtaking performance. To achieve this weight the car would have to have both a carbon fibre chassis and shell although this hasn’t been specified yet.

Aesthetically the car echoes Peugeot’s 2012 Onyx concept but it’s a very different beast. Surfacing has been brought up to date, and overall the Vision has a far more aggressive, businesslike and aerodynamic-led appearance with no side windows, the windscreen continuing right over the roof and a prominent tail-feature.

The car will be available in six colour variants in the very near future as part of a free update to GT6. Follow #PeugeotVisonGT for all the latest news. 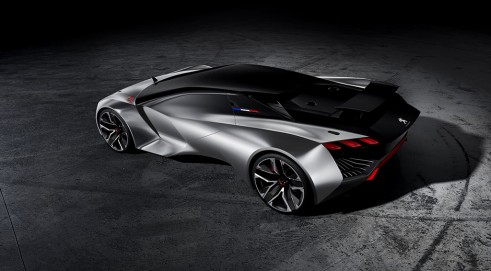