The Nissan GT-R R35 is actually quite old, isn’t it. For perspective, it first turned a wheel on UK roads around the same time the then new Ferrari F430 Scuderia did.

Yet like a fine wine, R35 seemed only to get better with age. In its initial sub 480bhp form we were told of a machine that was quite locked down and soulless.

Brutally effective but without the word “fun” ever mentioned in the reams of code that comprised and dictated its dynamic demeanour. A few years pass, a dual clutch gearbox is added, a spot of nip and tuck and some more power and the GT-R starts to loosen up.

Reports of a super sports car thats found its rhythm and soul start flooding in. The R35 has become this ever present giant killer and one of only a few yard sticks by which high powered sporting cars of the past five or so years have been measured. It’s a hard earned honour. 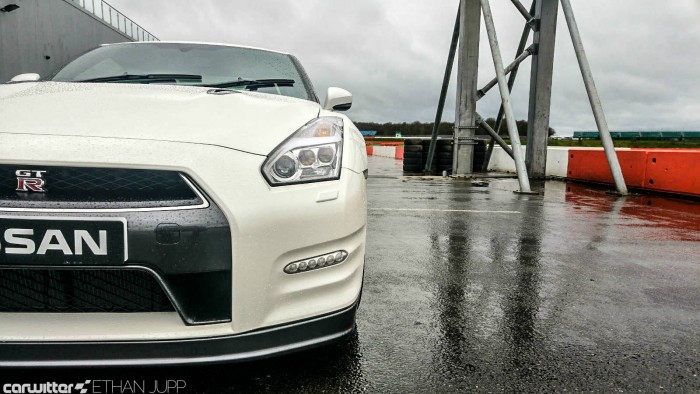 The trouble with maturing later in life however, is that one can peak and decline seemingly all too soon.

How do you maintain or increase that momentum once you’re at the top of your game?

How do you stay interesting and compelling in the face of ever strengthening opposition that has had plenty of time to learn from your success?

MY15 with its more modern LED facia along with the halo Nismo model have kept R35 imposing, attractive, headline grabbing and exciting, but with every upgrade passable via increments, the things that require the introduction of a whole new generation become more obvious.

So as I stroll towards the latest R35 Track Edition (by Nismo, don’t you know) for my first experience of its expansive breadth of dynamic talents, it looks to me like an old friend.

Though handsome and muscular in its proportions, the familiarity we feel could now be as much a curse as it is a blessing. In a battlefield occupied by 991 Turbo, Jaguar F Type and the new Corvette, the GT-R is at risk of being demoted to an attractive and capable background ornament.

The cabin was never a GT-R strong point. The quality of materials, the fit and finish were always the strongest indicators of how this car managed to undercut most of its rivals on price.

This, unlike much on the R35, has not evolved much over the years. If it was sub par way back when, it’s really showing its age now with the likes of the new R8 on the market. 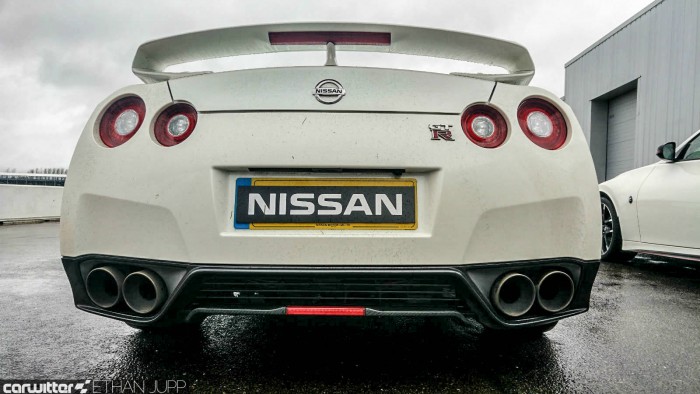 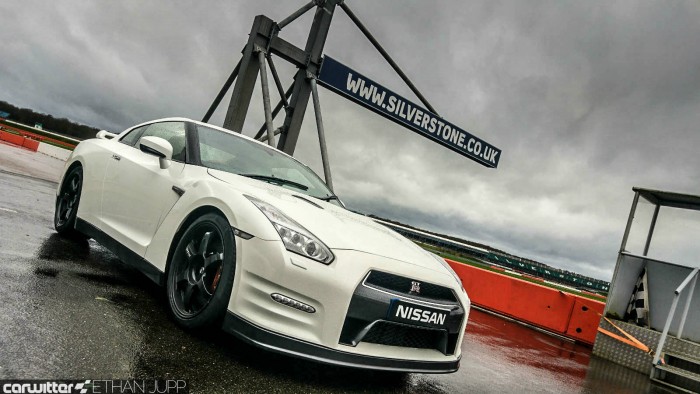 Then you get strapped in. The R35s driving position feels perfect. Its quant old chubby of a drive selector is lumpen and tough and the paddles sound and feel more like you’re dislocating a limb than pulling for a gear.

The wheel is tacky perforated leather with nasty aluminium effect button smatterings, yet its the right size for the speed of the rack and lock you apply, and the light fizz of information it conveys is delectable.

If this car were a dish served on Come Dine With Me, it’d be all flavour, texture and substance, with little to no presentation. Not for the superficial minded. And this is all before you’ve really got chewing…

Reality bending performance is not something new to the GT-R. It was almost unfathomable upon its arrival, and it has only blossomed further still into the realms of science fiction over the years. Sub 3 second 0-62 times are something that less than ten years ago was the reserve of the fastest car ever made (at the time).

The Veyron is a little more refined than the R35 though, as putting everything to ground in the GT-R rattles the cabin and your body to the core. Like the judder in the cockpit of a shuttle during launch, you get the sense that everything is only just holding together under the strain of immense thrust. 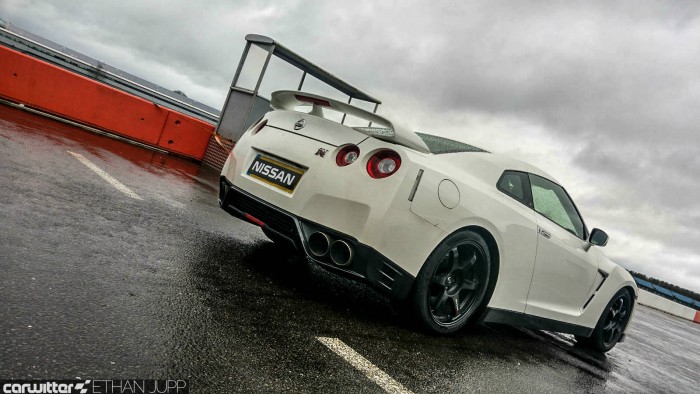 For something that is famously such a heft, this thing sheds speed with prodigious aggression and baffling stability, as if aforementioned shuttle had deployed its parachutes.

The ABS tends to tug at the pedal beneath your foot in the kind of sopping conditions we were pushing the car in, which was a little disconcerting. Space shuttles can’t really corner, so it’s at this point that analogy is nullified for the GT-R.

This is where this latest track pack by Nismo comes in, too. Off the stoppers, turning in tight and the new trick dampers and hollow anti roll bar courtesy of its steroidal 600bhp sibling keep what is a veritable glutton flat to the point where aggressive power on exit does nothing but pitch the car sideways, as opposed to making it wallow around on its shocks.

Once again this thing proves that fine tuning can unlock a great many new tricks in what is as we’ve established a greying old mutt. It’s just so tractable and malleable offering options at every juncture.

A bit of silly four wheel neutral drifting here, some full lock oversteer there, and full on blistering pace to finish. Three successive corners, in the tipping rain, and in the GT-R you can have it all. 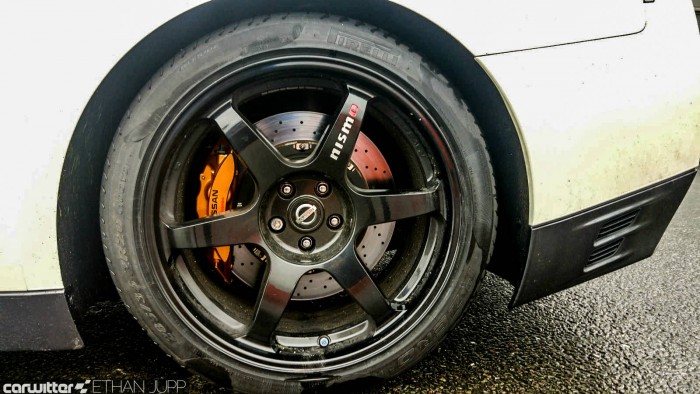 Much is made of how R35 fast tracked the digital age in performance motoring, but next to everything that makes the last generation of super sports cars such a joy to jockey is here in the GT-R and so much sweeter for the finer control that the Nismo goodies afford you: a real sense for where the cars vortices are from the drivers seat and exactly how they’re rotating around you.

Detailed information on the surface of the road and exactly how the tyres are interacting with it is fed through your buns and palms. Not the most soulful powertrain in the world, but brutally effective and vocally communicative to say the least.

Like much in this car, it’s endearing in its brutal Japanese-ness and the compromises it tells you to shut up and deal with. You just plug in, put on your bravest gurn, and let the industrial theatre of it all engulf you. 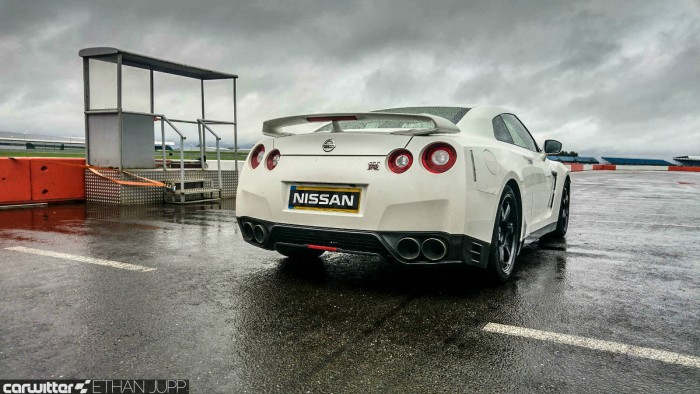 The Nismo toys make for a compelling and I think worthwhile overall upgrade (which takes price to £88,000) to the rest of the car. It’s the ultimate compromise between full on Nismo silliness and standard daily drivability.

It’s the drivers GT-R. The uniqueness of such an offering can’t be matched exactly by anything else, and for some, nothing else will do.