When you receive an email from McLaren asking if you would like a factory tour, you don’t say no.

Four months later and I’m sitting outside the security gate waiting to be let in.

Through the gate and left, you drive around the huge expanse of water adjacent to the McLaren Technical Centre (MTC).

It’s an impressive sight with the lake lapping about an inch below your tyres, the MTC appearing to rise out of this watery expanse.

I park up and walk to the main building, all glass it’s actually hard to make out where the entrance is.

Silently the doors push back and glide open, where I am met by none other than Amanda McLaren, Bruce McLaren’s only child. 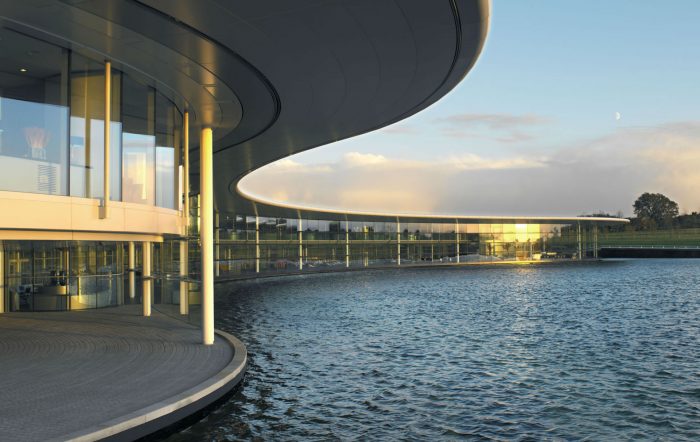 Introductions over, it’s time for a brief fact filled presentation on how the company is doing. 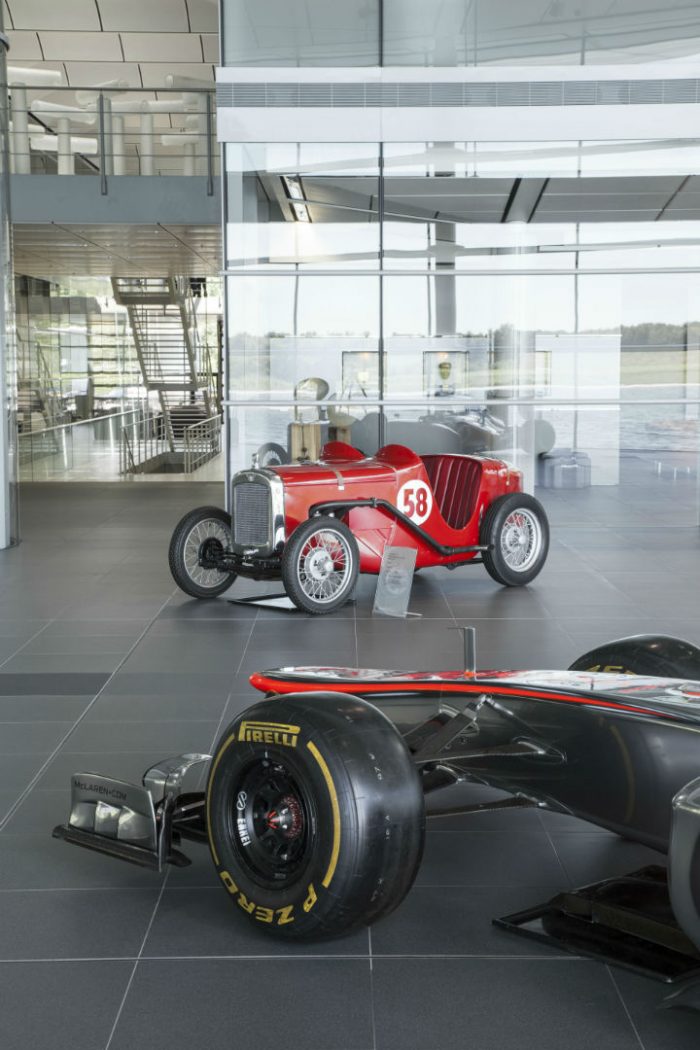 Moving out into the ‘boulevard’ in front of all the offices and the first car you come across is a 1929 Austin.

As Amanda chats away about the building, ‘Ron and his tiles’ I’m thinking…why is there an Austin in here?! Moving round to its front and it all becomes apparent.

This little Austin is the first car Bruce McLaren entered into a race, aged 15.

He won that race – naturally.

Like all great stories that little machine marks the starting point, it could be argued all this wouldn’t be here if it wasn’t for that little Austin. So fittingly it takes pride of place. Albeit with an oil drip pan nestling beneath it. 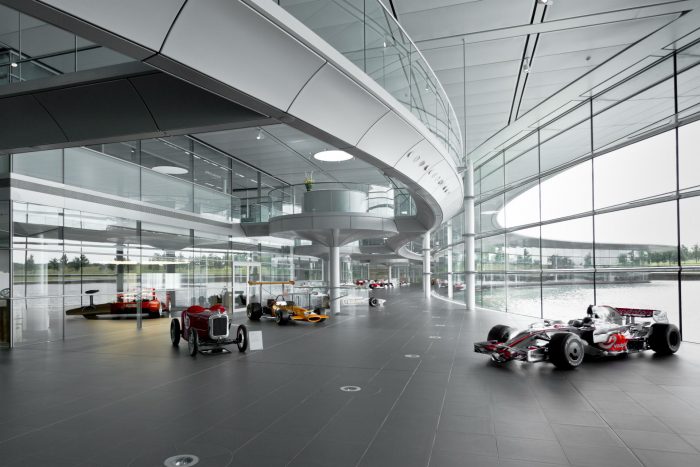 Moving up the boulevard you are transported into the McLaren history books. Every car has its story.

Walking along and listening to Amanda I realise how McLaren have really been at the forefront of design and bleeding edge tech when it comes to motorsport over the years. 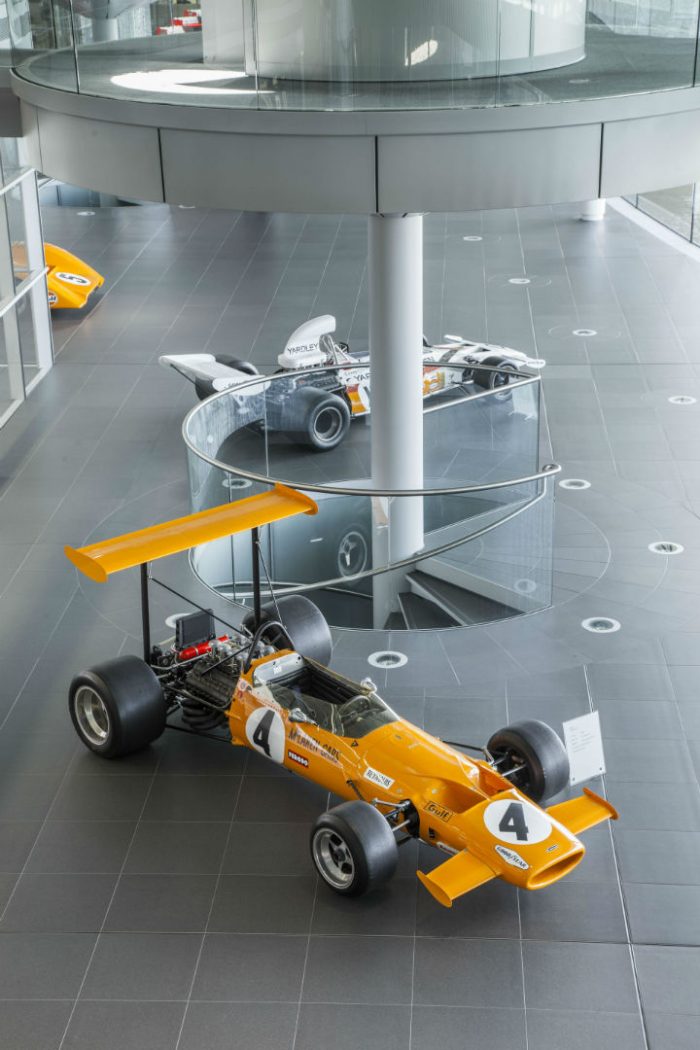 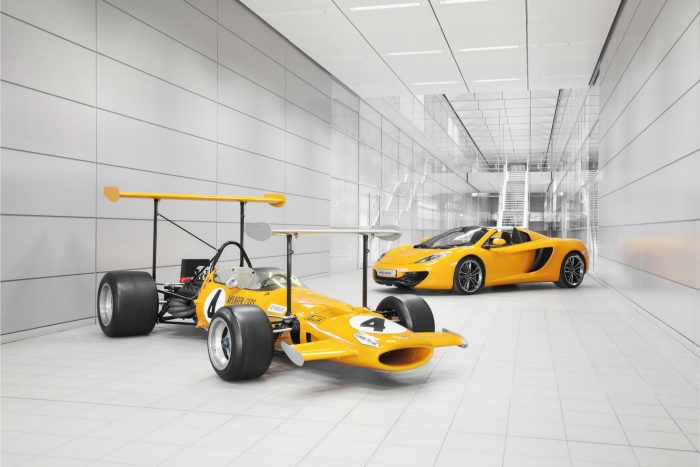 Coming to the bright orange block of cheddar that is the Can Am M8D. This is the car that McLaren took across the pond and dominated the Can Am series with, winning it 5 years running. All that money flowed back to the UK and helped the F1 team to success.

But it’s a sad sight for me. As this is the sister car to the one that Bruce was killed in at Goodwood in 1970.

A pin came out of the rear section of bodywork which started to lift at 170 MPH, the car span and hit a marshals’ post. Bruce was thrown from the car and killed instantly.

The year before he had spoken of his desire to build road cars. 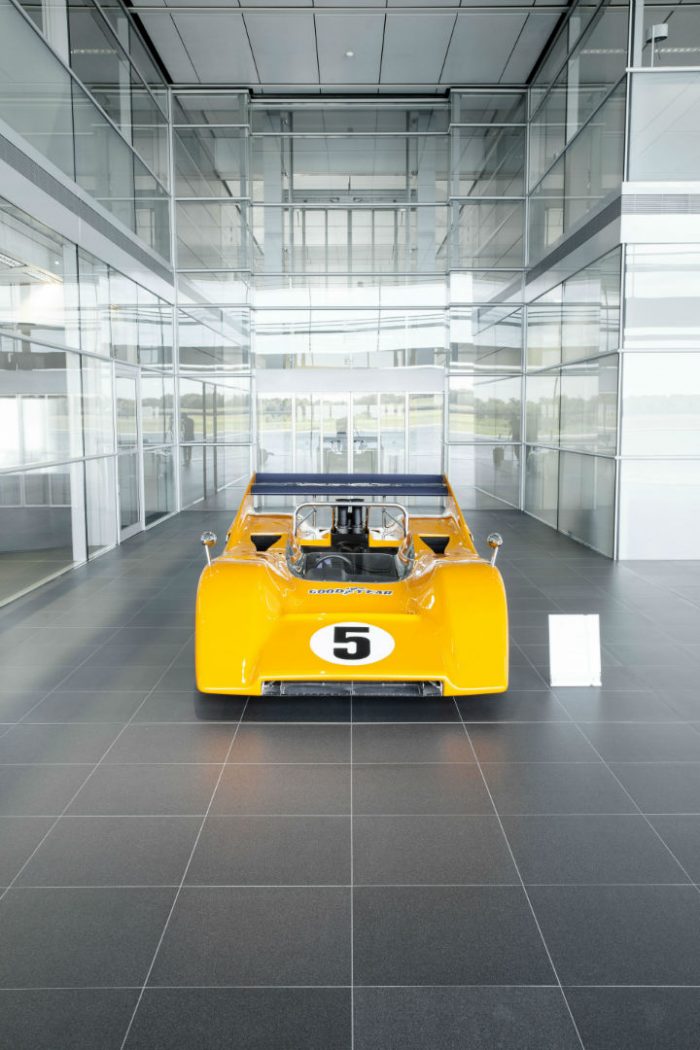 Fast forward to 1988 and the inception of the McLaren F1 was born. Gordon Murray was trying to console an upset Ron Dennis after the Italian Grand Prix.

He told him of a three seater sports car he had been dreaming of since childhood. It would be the ultimate road car.

Only 106 were ever produced, but Bruce’s dream had been achieved. 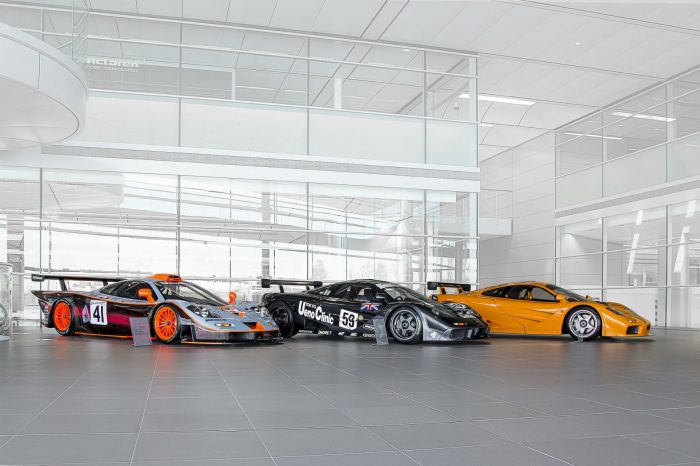 Sitting across from the gathering of F1 road cars are the more modern Formula 1 beasts. Now I’m not a fan of F1 but to see the changes in design over the seasons is just fascinating.

The 2008 model looked the most modern to me. It had wings, fins, splitters absolutely everywhere. In fact there was even a large, flat slab stuck on each side, blade like in appearance with wafer thin edges.

Apparently this was around the time when the cars were becoming too quick, so all the trickery was banned the following year.

We walk past the £16,000 S-Works Speciailzed McLaren built tarmac road bike….sixteen thousand pound. 250 were made, all sold out straight away, each bike built to its owners proportions. 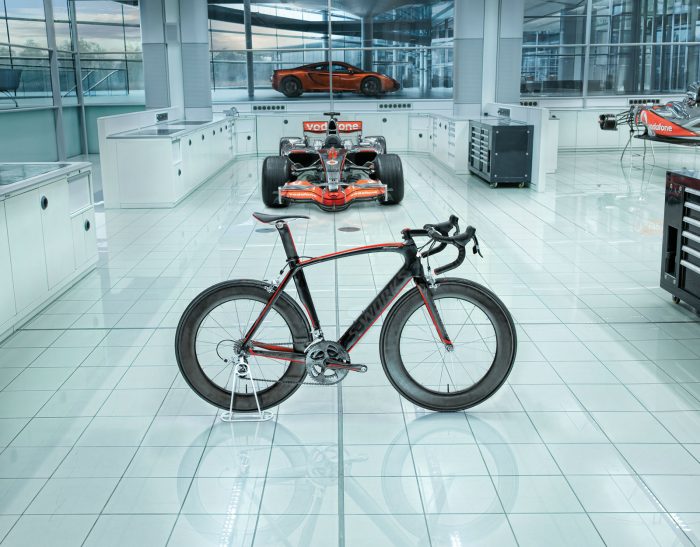 Moving toward the MPC – McLaren Production Centre – massive trophy cabinets adorn each wall. It is the largest private trophy collection in the world.

The oldest being from the 1933 Belgian Grand Prix, it was won by Senna in 1990 and when a title sponsor took over the trophy was sadly no longer used. 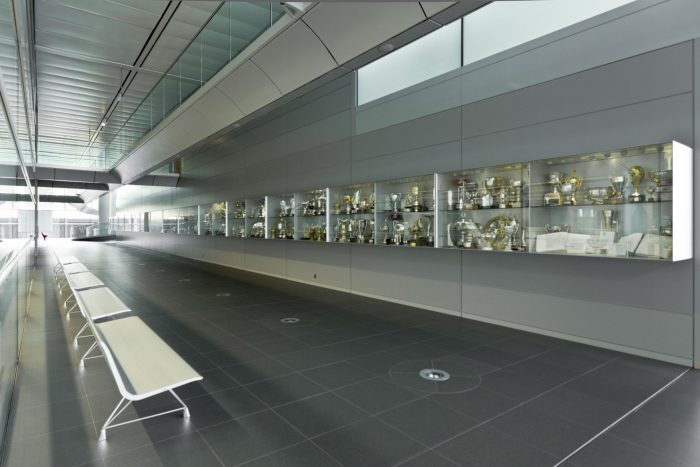 Into a wide brightly lit tunnel we go underground. Expecting at any moment to be grabbed by Dr No’s evil henchmen we reach a glass elevator.

Suddenly I’m transported from Fleming to Dahl, and I’m expecting to see a team of Oompa-Loompas walking past. The lift is actually glass all the way round, and if you look up you can see the sky, it’s like no other lift I have ever been in. 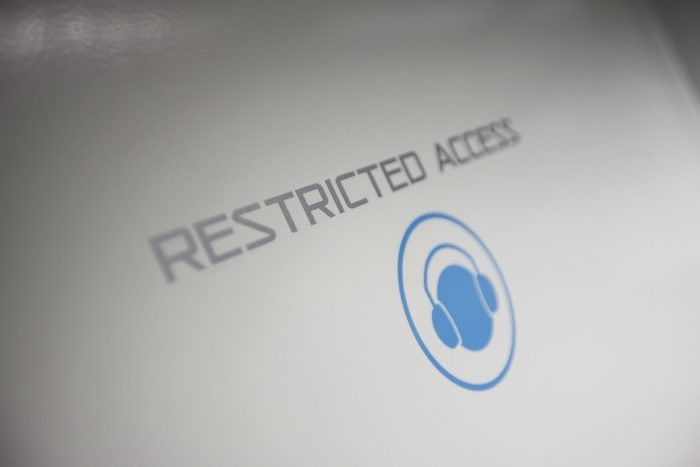 We go up one floor into what looks like a hallway, no doors just walls. Amanda says “Welcome to the MPC” pushes back a section of wall and the whole plant comes into view. McLaren’s are scattered all over in various hues. 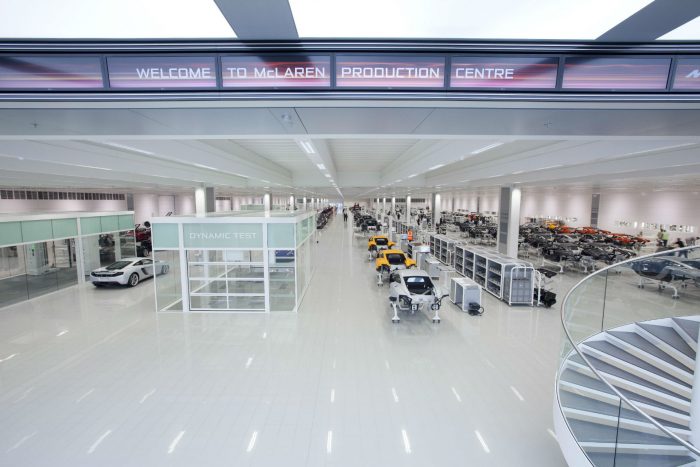 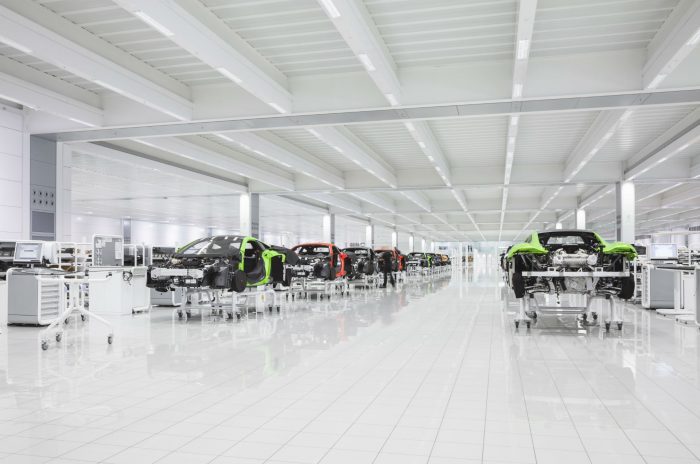 Standing on a balcony we watch over proceedings, feeling as if I should be slowly stroking a white cat I gaze across the clinical surroundings.

Everything is white and spotlessly clean, but what is most impressive is the deafening…silence of the place.

It is SO quiet, you can barely make out a small murmuring as people communicate, but there are no industrial machines here, no stereos, no builders banter. Just quiet professionalism.

Amanda say’s we have permission to take to the workshop floor, but to stay close to her and be careful not to scratch any of the cars with watches, rings etc.

Ascending down the spiral staircase we hit the white gloss tiles, as soon as we go to walk toward the production line we have to stop to allow a man with a floor polisher to go by – it’s really that clean in here. 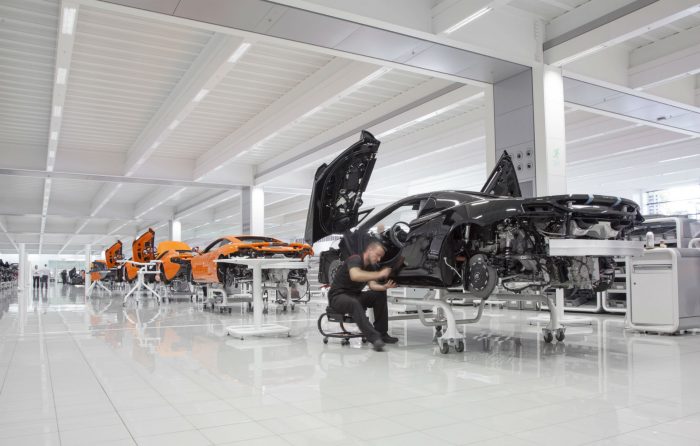 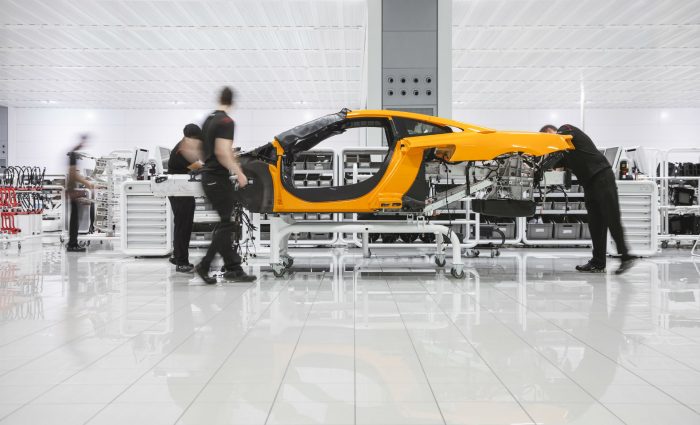 The only robotic machine they have on the production line is one that measures tolerances, everything else is manual.

Wiring looms are put in by hand, engines are mated to chassis by hand, paint is applied by hand, suspension, glazing, you name it. All done by hand. 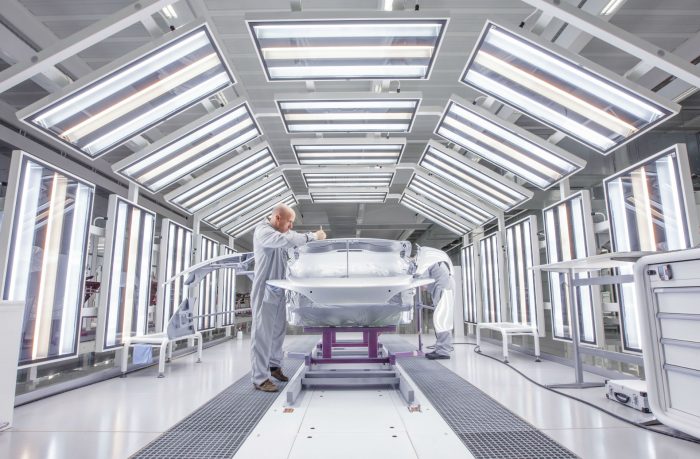 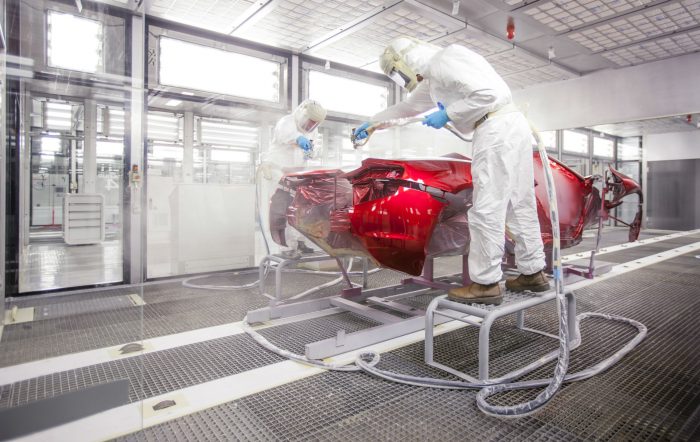 It had already left the factory, but had been sent back as the customer had changed their mind and wanted it repainted a different colour! We were also lucky enough to see the very last 2 P1 GTR’s in their final stages of build.

Again, a car that will not see a successor in a very long time. 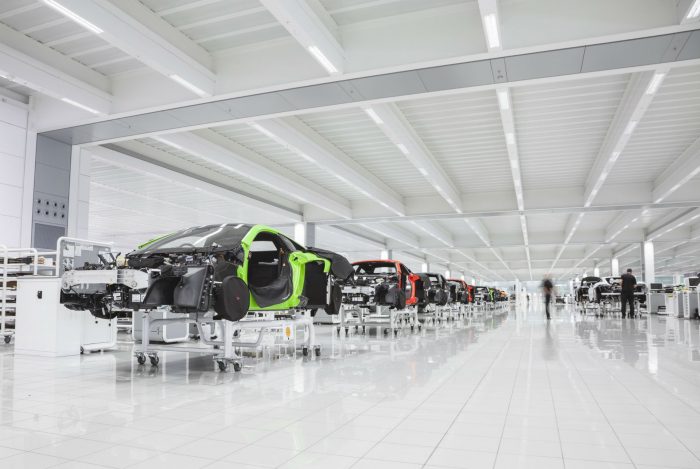 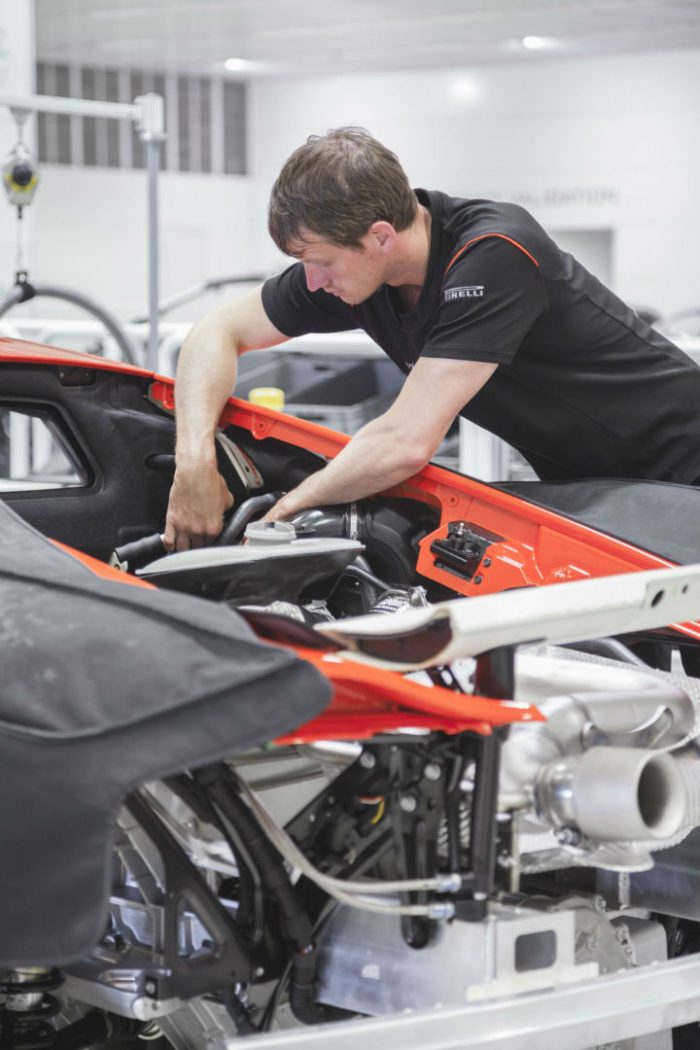 Occasionally one of these beasts will burble into life, either to be moved or fired up for the very first time. But apart from that the factory remains in its near silence, as the cars are pushed to the next work station on their dollies.

Even when they are in the monsoon chamber there is barely any noise. This glass box dumps 16,000 litres of water over the cars at 6 bar of pressure in 16 minutes, making sure every car is 100% water tight no matter what Mother Nature throws at her. 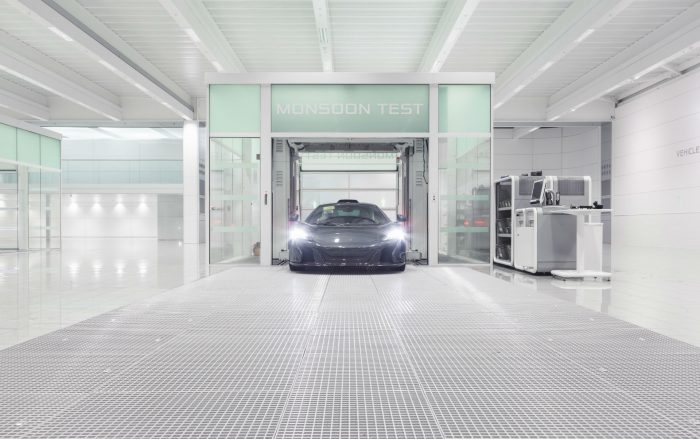 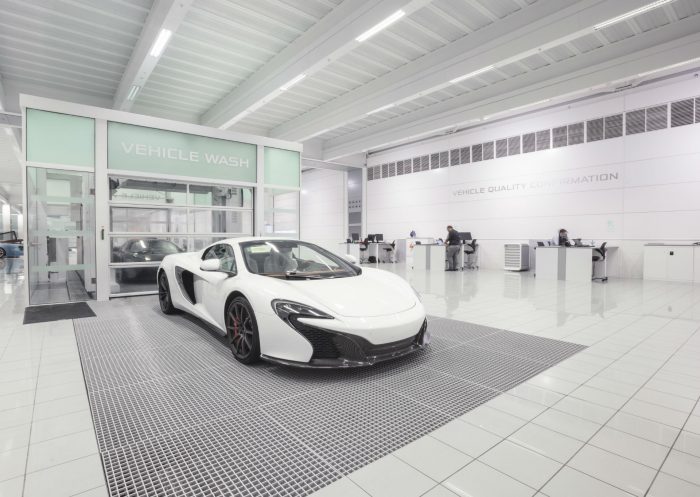 I have been to a few factories now and the most comparable – believe it or not – is Morgan. When you take away all the ultra-modern surroundings, the carbon fibre tubs that cocoon every owner, the massive price tags…the two have such vivid similarities.

Every car is worked on by hand, there is no heavy machinery involved in the build process, the employees have such pride in their work, such attention to detail, you can’t help but fall in love with the idea of owning one. 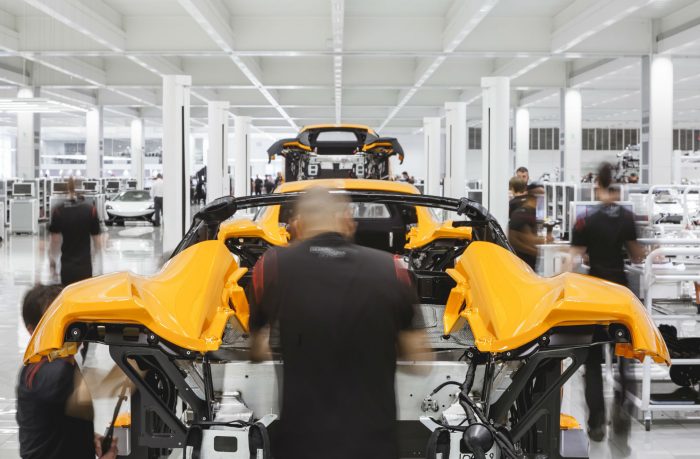 We wander around the factory a little more, watching everyone beaver away. This whole time I have been without a lanyard, guest badge or visitor pass. But because I have Amanda by my side none of that matters, occasionally she gets a hello or a humble nod and smile from one of the staff.

I can’t even begin to imagine how proud she must be to see her father’s dream come alive in such an epic, perfectionist manner.

If only he could see McLaren Automotive now.

Walking back through the underground tunnel and into the boulevard, we rewind back through time and end up stood next to the little red Austin. A fitting finishing point that brings us full circle. 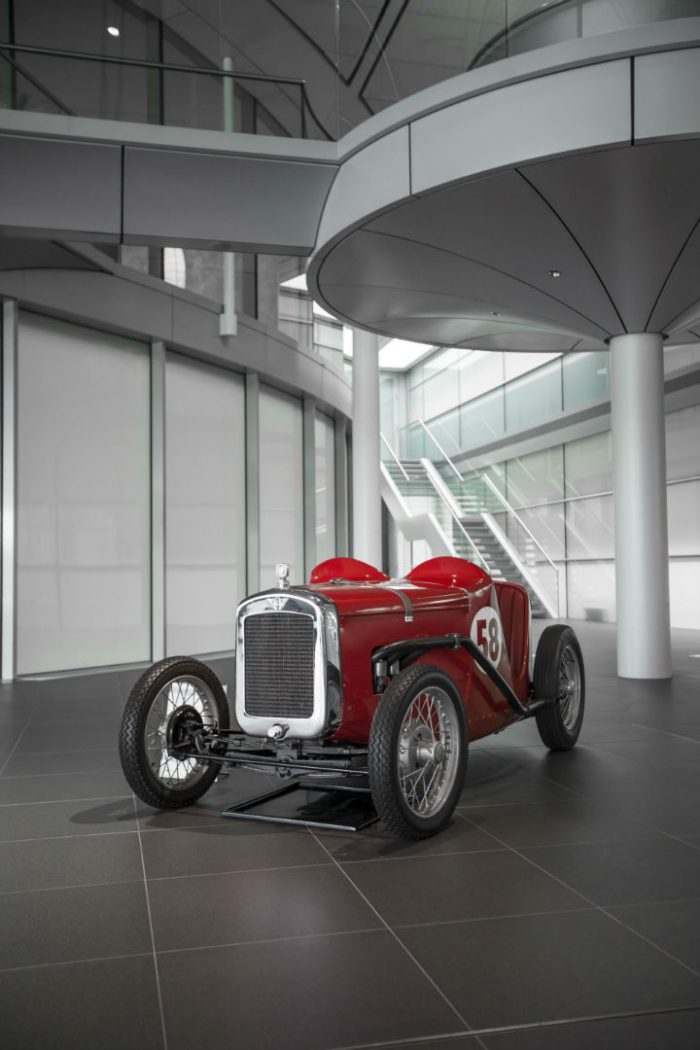