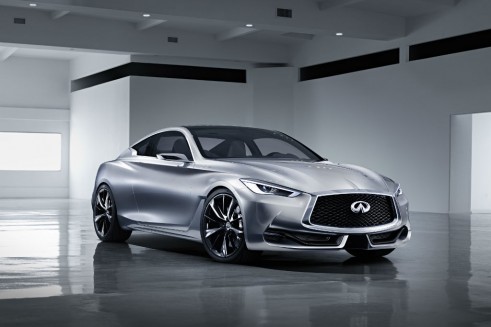 The first car show of the year is almost upon us, and with a new raft of concepts to feast our eyes on, starting with this – the Infiniti Q60.

Following on from the Q80 launched in Paris last year, and taking many styling cues from it, the Q60 is a sporty coupe designed to take on the likes of Lexus’s RF.

Up front we have the latest version of the now familiar Infiniti face, supported by striking, slim, headlights which mould into a harsh shoulder line running down just below the window.

There’s also a slash just behind the front wheels as we saw on the Q80 as well as a sporty low roofline and standard concept humungous alloys under big arches inherited from the Q50 Eau Rouge.

Inside it seats four in a 2+2 configuration and don’t be surprised if a future Infiniti coupe doesn’t look too dissimilar to this.

Expect more details to emerge as the North American International Auto Show kicks off in Detroit on January 15.

Lexus GS-F Unveiled Ahead Of NAIAS