The BTCC finally returned on Easter Weekend to its now traditional start point of the Brands Hatch Indy Circuit for the first threee rounds of the 2015 campaign.

With many teams opting not to show their true pace on the Media Day it was down to the practice and qualifying sessions to find out who was going to be a contender. First bragging rights went to Tom Ingram in the Speedworks Toyota Avensis posting the fastest time of the first session on a drying track, but come qualifying he could only manage 9th, just ahead of the 2013 champion Andrew Jordan in the Triple 8 Pirtek Racing MG.

Up front however it was the returning multiple champion that took the first pole of the season. Andy Priaulx in the WSR BMW would line up infront of the BMW “Superteam” VWs of Jason Plato, Aron Smith and defending champion Colin Turkington with WSR team mate (and one of the few non movers at the front of the grid) Rob Collard in 5th. Jack Goff out qualified his Triple 8 team mate in his first outing for the squad ahead of Gordon Shedden in the new Honda Civic Type R, Sam Tordoff’s WSR run BMW, Ingram and Jordan.

With no ballast on any car it would be intresting to see who would be quickest, especially as fastest laps in race 1 sets the grid for race 2.

26 cars lined up for the first round at Brands Hatch, Missing were both the Motorbase Ford Focuses – expected to join the series later in the year, Nic Hamilton’s Audi S3, One of the Paras Racing Infinitis, and both of the Welch Motorsport Protons. Dan Welch already out with a broken foot, Andy Wilmott unable to race with car issues – issues which would see him miss the whole days racing.

Priaulx opted to start of the soft tyre but after leading for a good half of the race suddenly dropped down the order to eventually finish 9th. Aron Smith also got the better of his more established team mates by finishing second ahead of Plato in third and Turkington who came home 4th behind the former BMR driver Jack Goff’s MG.

Plato however had set the fastest lap so therefore had the pole position for race two just ahead of Priaulx. Shedden and Neal in their new Civic Type Rs sandwiched Jordan in the MG for positions 6 thru 8 ahead of Priaulx’s ailing BMW. Ingram ran out the top 10. A fairly static race it has to be said as teams and drivers get themselves fully intergrated in a race situation. 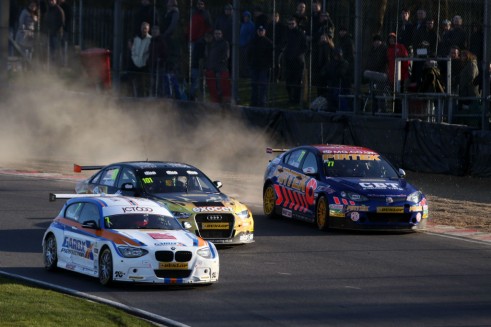 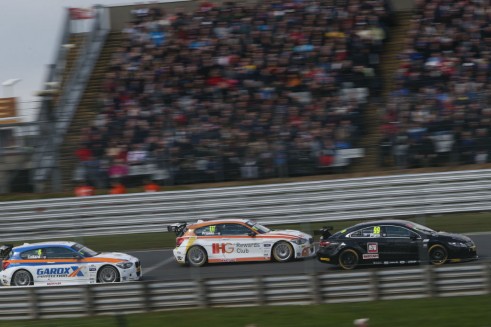 Afer a great start it looked like Plato would take a lights to flag victory, had the race been 20 instead of 24 laps long he would have as a puncture on the start of the 21st lap saw him plough through the paddock hill bend gravel trap and into retirement. 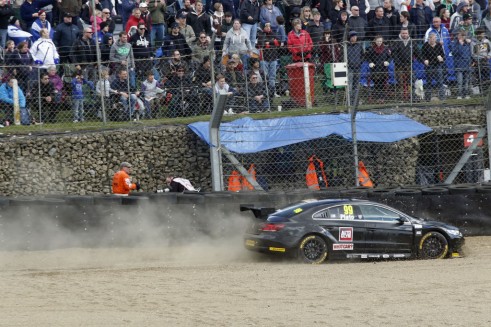 That left Shedden and Priaulx to fight for the victory, a fight that had been for the podium prior to Plato’s issues and had involved race 1 winner Collard untill his tyres (as had his team mates in the previous race) went away and he dropped down the order eventually finishing 16th.

This left the Scot and the Gurnesey man to fight for the spoils Priaulx edging ahead briefly as Plato retired only for Shedden to come straight back at him. On the last lap backmarkers looked like thay might have had a say in the race as Shedden lapped the Infinity of Derek Palmer Priaulx found a gap just wide enough to fit a BMW 1M inside and – with a little bit of panel rubbing it was a drag race to the flag with Shedden taking victory by 0.040 seconds.

Behind, Turkington filled the final podium spot while team mate Aron Smith was involved early on with Jack Goff, the latter recieveing 2 points on his racing licence and a reprimand. Morgan, Jordan, Ingram, Tordoff, Neal, Goff and Rob Austin would fill the rest of the top ten. 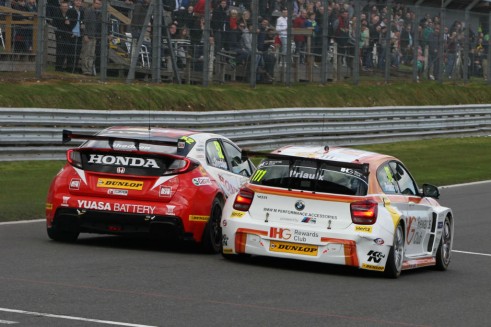 Following a stewards enquiry after Rob Austin had drawn himself into the pole position (knowingly he later admitted) a redraw saw the Audi driver keep his position at the front ahead of Goff, Neal, Tordoff, Ingram, Jordan, Morgan, Turkington, Priaulx and Shedden. 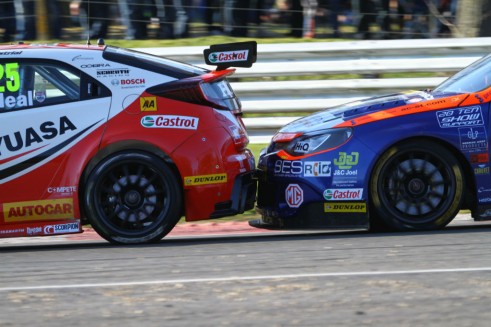 Matt Neal was pushed all the way in the final third of the third race of the day at an event where leading the most laps counted for nothing.

Pole sitter Austin took the lead at the start and saw Neal and Goff fall in and follow for the duration of the lengthen race due to an early safety car period to remove Rob Collard’s BMW from the gravel following a first lap tap. 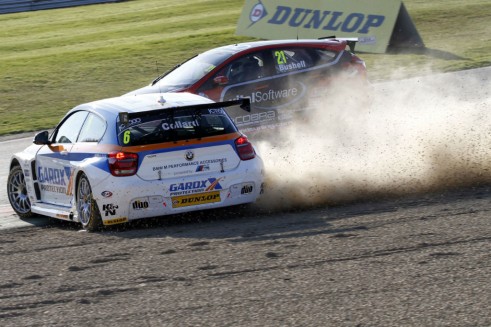 A rollercoaster day for the race 1 winner. Plato starting from the back was also not having the best time, unable to make the progress he would have liked to the two time champion ended up in 16th place.

BMR team mate Turkington also had a race to forget with an early off seeing him drop down the order to finish 12th while Aron Smith continued to outscore his superstar garage mates and earned his 2nd podium of the day and as a result 3rd place in the championship going into round 2.

Neal by virtue of winning the race leads the championship although ties on points with Jack Goff with Smith just 1 point behind them. Priaulx would fight to 8th place in race 3 and into 4th in the championship.

Race 2 winner Shedden had a race to forget as he pitted during the safety car period with a missfire but did get back out and set the fastest lap. Behind the Podium places Tordoff overcame Austin for 4th, Ingram had another good race to take another 6th ahead of Morgan, Priaulx , Dave Newsham in the Power Maxed Chevrolet Cruze and Austin’s Exocet Alchosense Racing Audi team mate Hunter Abbot taking 10th for Rob Austin Racing.

So, one meeting down, and a lot of non scores at the sharp end of the grid the 2015 season looks like it’s going to be as good as the last few. Anyone care to pick a champion yet?