The BTCC (finally) returned this weekend to Cheshire and to Oulton Park. Fans, teams and media alike greeted with what would turn out to be very changeable weather conditions.

Saturday featured mainly wet practice sessions which saw the BMW and MG squads take the initiative, while most of the Honda drivers suffered. Colin Turkington and Jason Plato shared the practice with the Ebay motors driver also taking the pole in a frantic session fought out on a drying track from Plato’s Triple 8 MG. 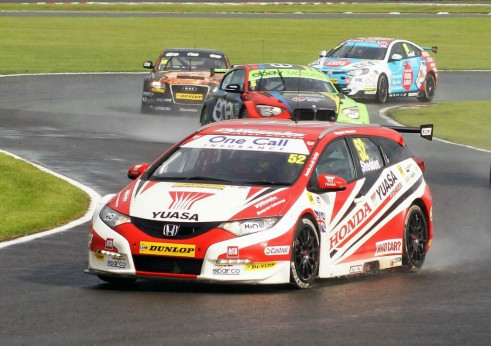 Gordon Shedden’s Honda split another pair of BMW/MGs of Rob Collard and Sam Tordoff while Rob Austin parked his Audi 6th after he hit his ‘awesome button’ during his final qualifying run. The other championship front runners in Andrew Jordan and Matt Neal had issues of their own and could only manage 13th and 14th respectively.

We would have a full complement of cars attending the meeting, Robb Holland had got his Audi fixed following the Donington accident, and all 3 of the cars involved in the Thruxton crashes had made the grid.

Turkington took a race one win from Ebay teammate Collard in what was – in fairness a rather lacklustre race by the BTCC standards.

Plato, Shedden, Austin and Tordoff rounded out the top 6 while most of the rest of the pack stayed in formation until Neal passed Alain Menu’s Passat for 13th towards the end.

Jordan would finish 15th scoring one point but would lose the championship lead to Turkington and Shedden. 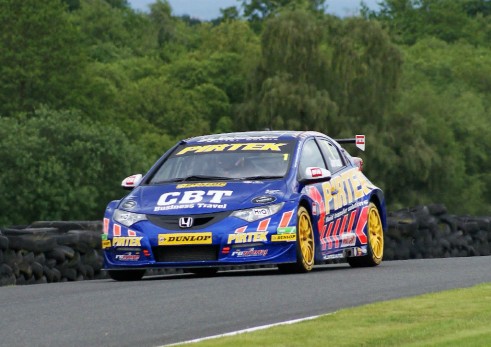 With the grid lining up as the first race ended we’re hoping for a little more action.

Lights out and away we go!

Lap 1 Great start by Austin who jumps to third behind the BMW pair, Turkington leading from Collard.

Lap 2 Plato right on the tail of Austin, Shedden not far behind the pair looking to capitalise should a chance occur.

Lap3 Tordoff and the Airwaves Focus of Mat Jackson now catch the Austin/Plato/Shedden brawl, is Austin holding the pack up?

Lap 4 The lead pair have pulled out nearly 3 seconds on the battle for 3rd.

Lap 5 This is not a good day for the magnificent 7, Neal and Jordan looking at small points and Menu collides with Fabrizio Giovanardi’s Airwaves Ford Focus at Hislops sending the Italian ace right down the order. Menu loses a place to his teammate Aron Smith in the incident.

Lap 8 Jordan battling hard with Dave Newsham in the AMD Ford Focus, Jack Goff in the RCIB Insurance Insignia tries to follow the champion through, contact between the pair, Goff holds on to his car but poor Newsham skids across the grass and hard into the barriers. Safety car deployed. 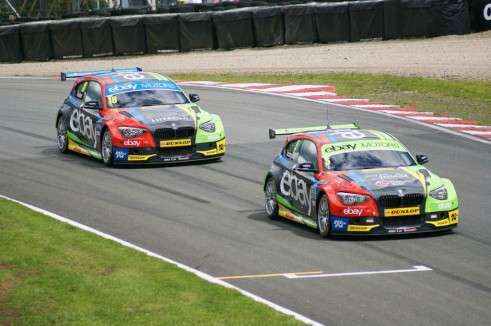 Austin has passed Collard for second, as the BMW driver anticipated the safety car boards and waved yellow flags, but were they out at that part of the course?

We are racing again for 14 laps now due to safety car, Collard has retaken Austin before the safety car pits, further back Martin Depper spins off in the other Pirtek Honda at Druids otherwise it’s as you were at the front.

Lap 11 Jordan and Neal battling hard for the small points, with the champion getting alongside the multiple champion and making the move stick at the start of the 12th tour.

Lap 12 Austin still keeping the Audi ahead of the MG of Plato and the rest and proving that maybe 101 octane is better than 99! 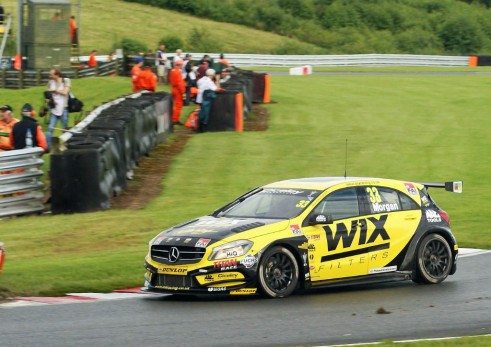 Lap 13 Slow BMW on track! Nick Foster who has had a great albeit quiet meeting so far looses power and pulls off with a technical problem, Adam Morgan also has a small off in his WIX Mercedes.

Lap 14 United Autosports Glynn Geddie has a moment at Lodge spinning his Toyota Avensis out but thankfully keeps it out of the barriers, we don’t need any more of the incidents we’ve seen at Donington or Thruxton this season! 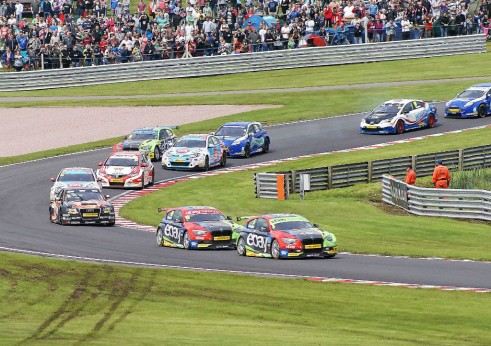 Flag Turkington takes a second victory from Collard with Austin, Plato and Shedden just behind.

However, in the final corners Tordoff is hung out to dry by Jackson in a move which sees the Ford driver take 6th Tom Ingram (on the soft tyre) take 7th, Aron Smith take 8th and drops Tordoff to 9th.

Menu would finish 10th however the incident involving Giovanardi and a separate one with Jordan would mean the Swiss would lose the position and therefore start the final race in 11th. Rob Colard and Rob Austin would also have their positions reversed following the yellow flag incident. Collard would still carry more ballast as a result of finishing position.

Reverse Grid and Alain Menu would do his teammate a favour and draw Aron Smith on the pole position ahead of Tom Ingram, Mat Jackson and the rest. Ingram is due to be the only starter at the front on the harder tyre following the race 2 decision to run the soft but a mid afternoon rain shower sees the grid all line up on wet tyres.

Dave Newsham will be missing from race 3 as his car was too badly damaged following his race 2 shunt. 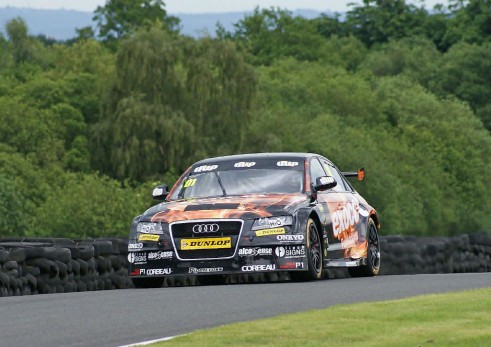 The lights are out and go! The wet surface could make for an interesting race 3 and straight away a great start from Jackson and Collard, big incident behind as Hunter Abbot in the Rob Austin Audi and Jack Goff go off straight away, Matt Neal is also off. Safety car out. 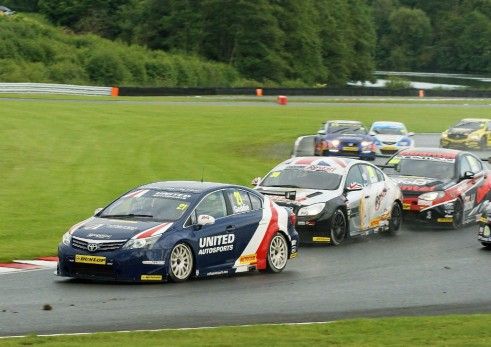 Lap3 Jackson has a huge moment in the tricky conditions as he slides across the wet grass, correcting and overcorrecting the wayward Focus before bringing it back under control, albeit well down the order. Collard also has a minor moment at the chicane, these conditions are catching the best of them out!

Lap 4 Shedden passes Collard as Turkington closes on Plato. Further back Robb Holland retires from 12th in his Audi S3 following contact with a barrier, such a shame considering this car has had to have been rebuilt following his huge Donington crash which saw him miss Thruxton.

Lap 5 Menu and Jordan catching Tordoff for 6th Smith, out front doing a fine job keeping the pack behind him.

Lap 6 Plenty of action in this race, Lea Wood gets shuffled back from 12th to 18th meanwhile at the front, contact, Plato and Collard collide, Plato goes for a gap as Collard shuts the door sending the BMW spinning down the order, Turkington capitalises, passes the MG and chases down the Honda of Shedden – hat-trick of wins for Turkington?

Lap 8 Tordoff now all over the back of Austin, can he do better than his teammate a few hours ago?

Lap 9 Smith now starting to pull away as Shedden and Turkington fight over 2nd, Turkington looking very racy but Plato is catching back up with them.

Lap 10 Plato sets the fastest lap, there is a very apparent dry line on parts of the track, how will the wet tyres hold out? 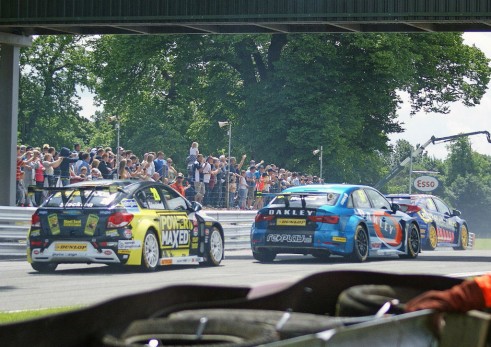 Lap 11 Plato and Turkington side by side and trading 3rd place, Plato finally gets the place but with a helpful “tap” will the move stand?

Plato would receive a time penalty for the Turkington incident which would see the 3rd and 4th position reversed meaning that Turkington now has a 9 point lead over Shedden, with Andrew Jordan now down to third 27 points behind the BMW driver.

So, Oulton Park and the International layout, it wasn’t particularly BTCC friendly today, hopefully this is just a one off, hopefully we can revert back to the shorter track for 2015 and hopefully we can have some more great racing as we head to the BMW friendly Croft at the end of the month.