A damp weekend at the North Yorkshire circuit marked the halfway point of the 2013 season. However the weather, or the fact that a very long, famous (albeit tragic this year) race was taking part in North Western France could keep the fans from more tin top  BTCC action. 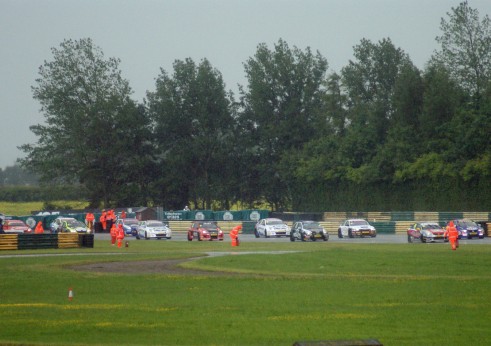 Oulton Parks race 3 podium winner, Adam Morgan, took 10th on the grid for race one, after giving his Ciceley Racing team some extra work, following a big crash in practice. Also this meeting would see two new faces for 2013, Motorbase were running an extra car for long term tester, part time driver, reigning British GT champion, and former Porsche Carrera Cup race winner Michael Caine (no not that one) and, as Liam Griffin was unable to make the Croft meeting due to other commitments, his S2000 Addison Lee Focus was driven by 19 year old Jake Hill.

The racing started as you would expect, frantic! The rear drive BMWs getting an excellent start, seeing Turkington take the lead and Collard making places before tangling with Plato, and dropping to the back of the pack. Elsewhere Nick Foster in the 3rd WSR 1 Series battles with, and takes the MG of Sam Tordoff, Tordoff’s MG teammate is having issues of his own keeping reigning champion Shedden behind him, as the field settle into the early laps and try to second guess what the weather will do next.

Further back Frank Wrathall spins out in his Toyota Avensis after contact, Adam Morgan and Matt Jackson battle hard for the lower points positions. However a lap later and Jackson goes off at the chicane, he gathers it up back across the track but on overcorrecting hits the tyre stack with his rear to record a second retirement due to rear suspension damage in two rounds.

The soft tyre shod BMW of Foster now reels in Jordan’s Pirtek Honda and attempts a pass, Jordan is forced to take evasive action to prevent contact with a tyre marker, and rejoins the track ahead of the flying Beemer, but must yield the position.

It would appear this track, the conditions and soft tyres are a good match for the BMWs, as Turkington (also on the soft tyre) has opened up almost 6 seconds on the Yuasa Honda Civics in 2rd and 3rd. Plato is 4th, but the flying Foster is now on his tail too. Lap 9 and reports come in that rain has started falling, will there be a final twist in the tail of this race; or will the field stabilise and take it easy, not wanting to risk too much in the tricky conditions. This is BTCC, of course not! 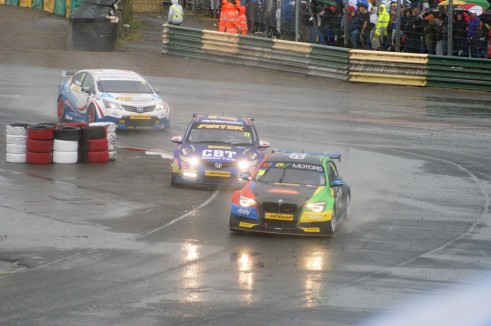 Lap 11 sees Foster is all over and eventually passing the 2 time champion (and most winning driver in the history of the competition) for 4th place. While the luckless (thus far this season) Collard has fought up to 11th from 20th following his first lap spin, and has joined Tom Onslow-Cole’s Passat, Morgan, Jeff Smith’s Honda Civic and Michael Caine in an epic battle for the final points. Collard makes a great save again after contact, but this time it’s Caine who takes the advantage to finish in the points on his BTCC return. At the front however Colin Turkington takes his second victory of the year from the Hondas of Neal and Shedden. Turkington’s teammate Foster takes an excellent 4th with Plato, Jordan, Tordoff, Caine, Collard and Onslow Cole filing the final points positions.

In the Jack Sears trophy for S2000 spec cars, Jake Hill marks his BTCC debut with a class win. I expect we will be seeing a lot more from this youngster in the future!

Well the weather has turned, the drivers and teams have a lot to think about, various radio calls happen on the  formation lap as the drivers try to decide what to do. The MGs and Caine choose the wet tyres, everyone else on slicks.

Green light, and the rear drive BMWs again get away well, Turkington from Foster, who drops as quickly as he gained, the two wet shod MGs quickly replace the two BMWs at the front, and look to repeat the dominant form they had showed in the dry at Oulton Park. It was not to be however, the rain eased, the wet tyres became more unstable, and the MG pair dropped down the order as Turkington retakes the lead, this time followed by Shedden. Not too far behind is a real battle of Hondas, BMWs and Morgans’ Toyota, as 6 cars fight the conditions and each other. Collard puts a great move on teammate Foster – remember these guys already had a collision at Oulton last time out, but this time, even in tricky conditions everything is clean. 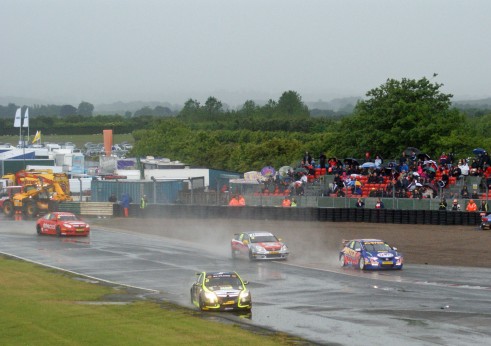 In the Jack Sears trophy the leading three cars David Nye, Jake Hill in their Focuses followed by Lea Woods Vauxhall are separated by nothing, as the battle for class honours gets frantic. Also getting frantic is Collard, who is now on the back of Jordan after he taps Neal at the chicane. Collard gets alongside and elbows Jordan off the road again, at the same place Foster forced him off in race 1, this time however Jordan has the added obstacle of Michael Caine’s Focus to deal with, as well as the tyres! Jordan doesn’t yield to Collard, as he re joins ahead of the BMW. In front of this battle, Turkington laps both MGs en route to a 2nd victory of the day, proving that the BMW works equally well on soft tyres with no ballast, and hard tyres with full ballast. Shedden follows, Tom Onslow-Cole is in a lonely 3rd then Neal. Collard takes Jordan at the hairpin, albeit unfairly as judged by race direction, and those two places are later reversed. Foster, Morgan, Dave Newsham and Jeff Smith round out the top 10. 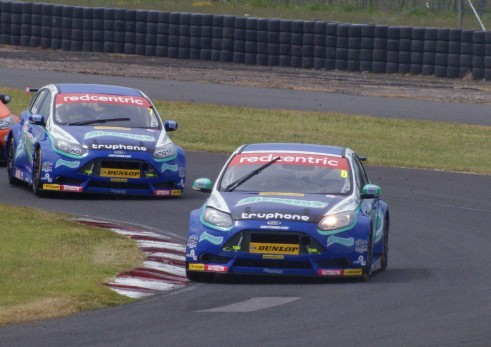 David Nye took his first ever Jack Sears Trophy victory, from Lea Wood and Jake Hill, all 3 drivers were covered by just over half a second.

For the third race the reverse grid decided that Adam Morgan would take pole, with Nick Foster second, Collard was third ahead of the rest. This time wet tyres were the order of the day!

Again the BMWs get a great start, this time with Foster taking the lead from Morgan. Frank Wrathall’s miserable weekend gets worse as he gets involved in one of the many incidents at the back of the field in the opening few laps. Morgan and Shedden both leave the track but are able to re join and continue without damage, only further down the order. There’s a lot of standing water on track, Foster now leads from Neal. Jackson, Hill and Dan Welch collide at the hairpin causing damage to Hill and Welch, ending their races; while Jackson escapes…this time. Up front Neal decides that its time to make a move and takes the lead from Foster, Turkington in third soon takes second from his team mate and sets about chasing down Neal, along with a hat-trick of victories.

Andrew Jordan starts closing in on the BMWs, as Neal pulls out a small lead, Jordan gets a run on Foster, but the recovering Adam Morgan goes off heavily at Clervaux – not for the first time this weekend. Newsham is now having his best race of the weekend, passing the fading Foster for forth. 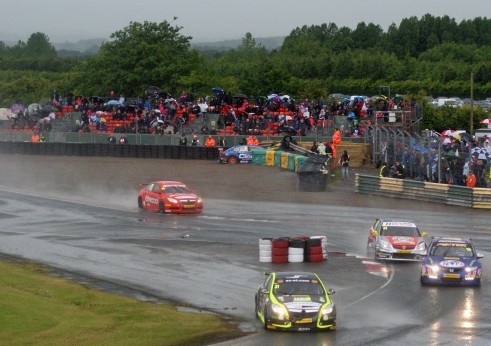 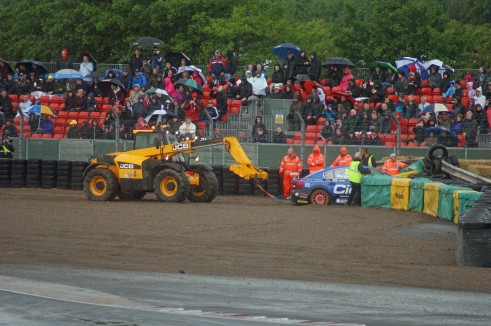 Further back are the two MGs, Plato was up to 9th while Sam Tordoff setting the fastest lap of the race thus far. Shedden, who had recovered from his earlier off was the latest to pass Foster. Jordan’s attempt to catch the leading pair is stopped when the weather worsens, he runs on forcing him to drop back and take a deserved third. While Plato ever the fighter, and after every championship point he can get, takes 6th.

As the final lap starts it looks like Neal will take an easy race 3 victory, but two – by his own admission “mighty moments” almost let Turkington in for a clean sweep. Jordan finished the race in third, ahead of Shedden, Newsham, Plato, Tordoff, Foster and Aron followed by Jeff Smith running out the top 10.

Lea Wood would make it three different winners in the Jack Sears Trophy, after nearest competitor James Kaye spun on the final lap.

Heading into the summer break Matt Neal now has a 19 point lead over Andrew Jordan, as we look forward to Snetterton in early August. 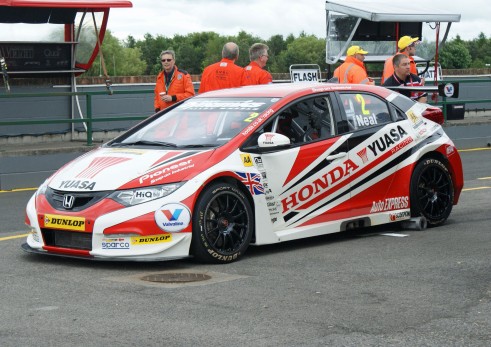