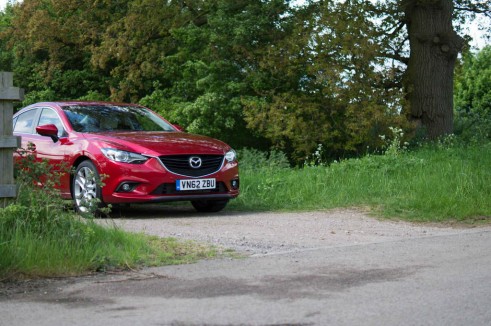 Mazda launched its new 6 series toward the end of last year, aimed to compete directly with the likes of BMW, VW and Audi. We tested the 2.2 Diesel in top of the range Sport Nav spec. With 173 BHP and a 0-62 time of 7.9 seconds you’d think emissions would be pretty high. But due to Mazda’s new Skyactiv technology CO2 is only 119g/km, and at £26,095 it’s reasonably priced too. 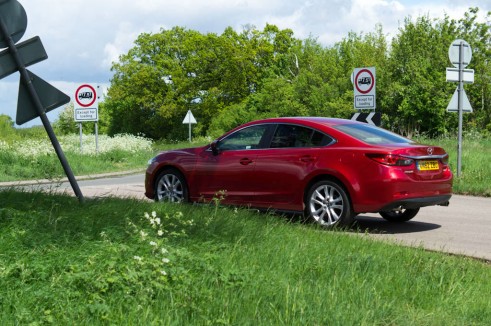 Mazda have really stepped up their design game with the new 6. It’s the first car to fully feature its new “KODO” design language. It’s a very good looking car, with a muscular mean front grille, which flows into athletic curves over the front wheel arches. A second line flows from the wing mirrors and fades into the rear door, where it is met by another sculpted line emanating from the boot lid.

Sport trim features twin exhausts which sets the back end off nicely; along with the beefier 19” alloys.

The whole design and look is very German, but a lot more interesting; in fact from side on it looks like an A5 Sportback, but with a boot. It has to be one of the best looking saloons on the market right now, it certainly makes cars such as the Mondeo look very dull! 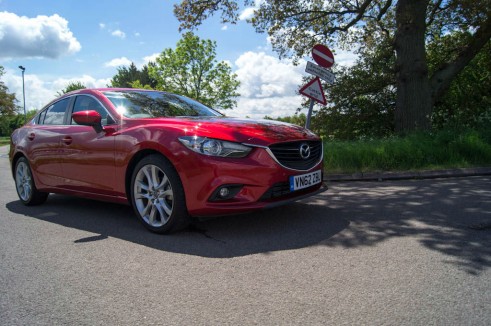 Instead of going down the route of electric vehicles and hybrids, Mazda have sought to improve efficiency in their current engine range. This is where Skyactiv comes into play, with a compression ratio of 14:1 it completely eliminates the need for any emissions filtering. Meaning the Mazda 6 can achieve CO2 figures far lower than its competitors. It also gives the new 6 Series 20% better fuel efficiency, a two stage turbocharger helps keep the performance figures high.

Skyactiv technology doesn’t stop there, Mazda have reengineered the gearbox, body and chassis, helping make the car lighter and sportier.

And boy does it work! Acceleration is quick and smooth, the gearbox has a short sporty throw to it whilst the suspension is firm but not overly. It will still soak up potholes and bumps with a dull thud. At speed it copes very well, occasionally getting a little floaty, but still giving excellent confidence.

You completely forget you are driving a 4.8 metre saloon. On twisty country roads you can plant the throttle and weave through the corners as if you were in a sporty hatchback. Steering is direct, and lightly weighted. You don’t get much feel for the road through it, but that’s a given with electric steering these days. 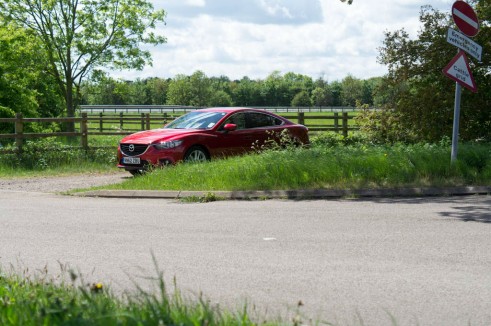 Accelerating in any gear the pickup is good, you can lazily leave it in 6th and overtake on the motorway with ease.

Road noise is minimum, and the 2.2 Diesel has a rather sporty note to it, there is however a fair amount of wind noise due to the large mirrors.

We also drove the 2.2 with an automatic gearbox. It was superb, smooth changes with a quick pick up. Even under hard acceleration there was no jerking as the car changed gears. It has to be one of the best automatic boxes we have driven, Mercedes take note! 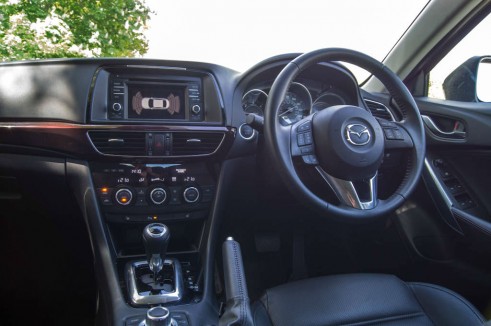 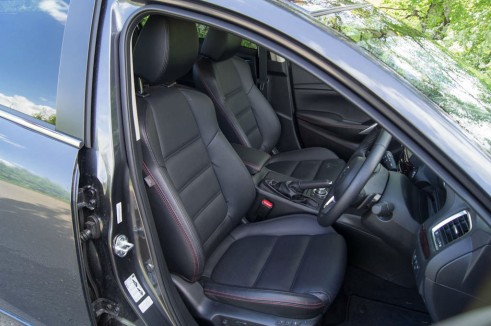 Inside, the quality theme continues. Dash plastics have a nice soft touch feel, the dials have a very nice mechanical ‘click’ to them and the high gloss bar that runs across the passenger side is a nice touch.  However the whole dash has basically been lifted from the CX5, something a little more exclusive, and more up market would have been better on the 6.

A central control knob can be used to select different functions on the touchscreen which is handy as you don’t have to constantly reach forward. The only thing to really moan about is the size of the screen, at 5.8 inches it’s pretty diddy, only a tad bigger than most smart phones. It makes for a slightly fiddly experience.

Rear headroom would be a little cramped if you are tall, but legroom is ample. The rear seats are also very comfortable, long journeys wouldn’t be a problem in the 6.

The boot is cavernous, it extends quite a way beneath the boot lid and equates to 468 litres. Rear seats can be released and folded from within the boot which is a good feature. 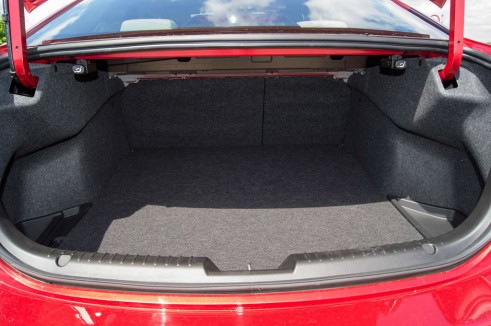 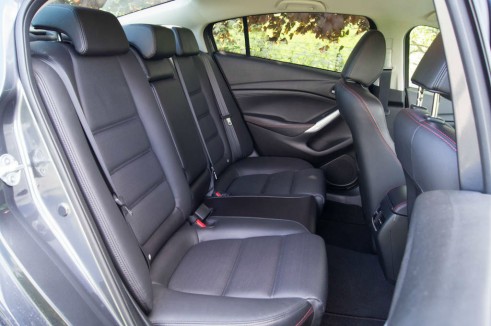 Build quality is solid, driving is fun with great handling, and it’s most definitely a looker! But is it an Audi beater? We say yes! If you look at the company car figures the Mazda 6 looks even more appealing 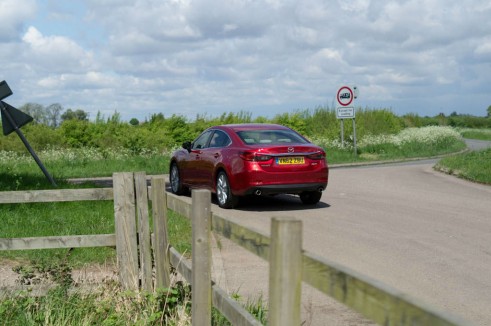