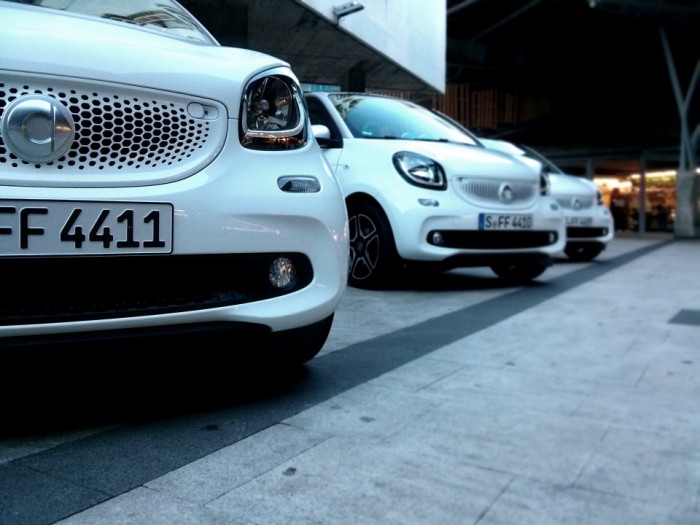 The all new Smart car(s) have a unique test to take in comparison to the generic rigours that a new car might endure to prove its worth.

It’s no secret that these cars have been developed in conjunction with Renault – who’s almost mechanically identical interpretation of the project, the Twingo III, has been with us for a few months.

If the two were closely priced then it would be a casual case of subjective styling and brand judgements that made the difference in a choice between the two, but they’re not.

The pricing is stated in more detail here but generally the ForFour is about £2000 north of the Twingo, spec for spec.

So the ForFours task is thus: be 20% more car in superficial subjective terms, than its sister car.

I remain hopeful, however, as Smart were likely aware of the ramifications of a collaborative development effort from day one. 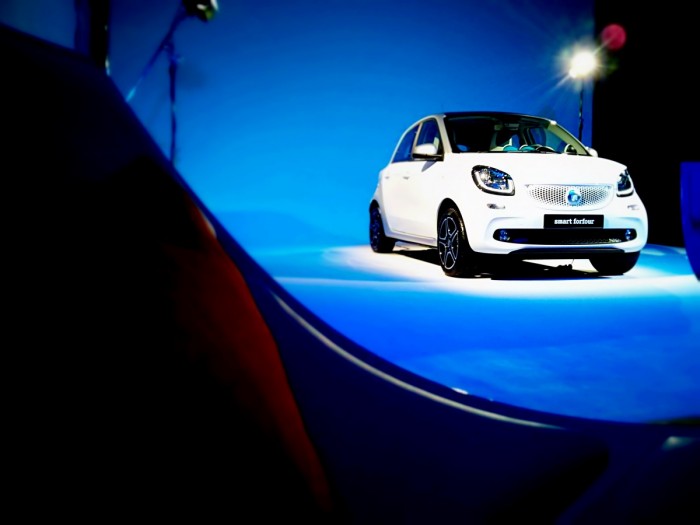 On the outside the ‘baby’ ForTwo takes an evolutionary step on from its forbearer: sporting recognisable ‘Smart’ attributes with some styling transition and refinement befitting a car that is into its third design iteration.

Bold in a way that we’re familiar with from Smart, yet handsome and now quite grown up.

It’s a similar story with the ForFour- this time more of a four door version rather than a separate model line.

A wise move, I think, and one that lends a well needed dusting of maturity to the range. Crucially, the ForFour is completely distinguishable looks wise from the Twingo. You’d need to look at the two side by side before connecting the dots. 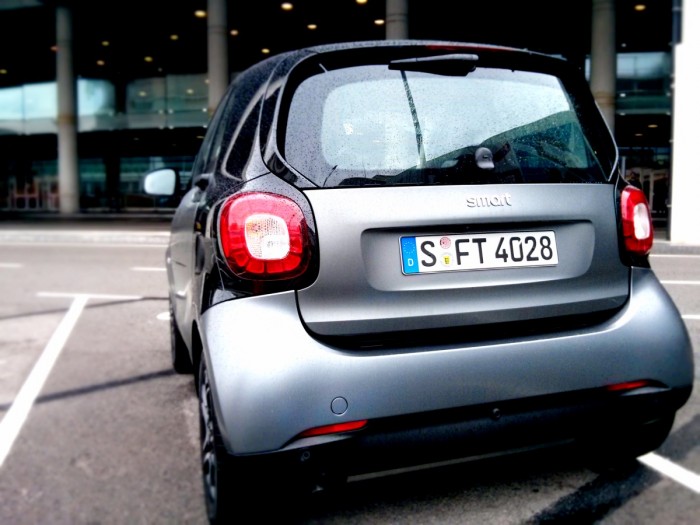 Can things go belly up if you let a kid loose with the configurator? This cutesy city car segment has become infamous for the vast range of customisation on offer.

By comfortable contrast, the customisation options as a whole are less abstract and diverse than much of the competition.

There is however, enough individuality for the young cool clientele to feel satisfied with the statement they’re making with their buy. 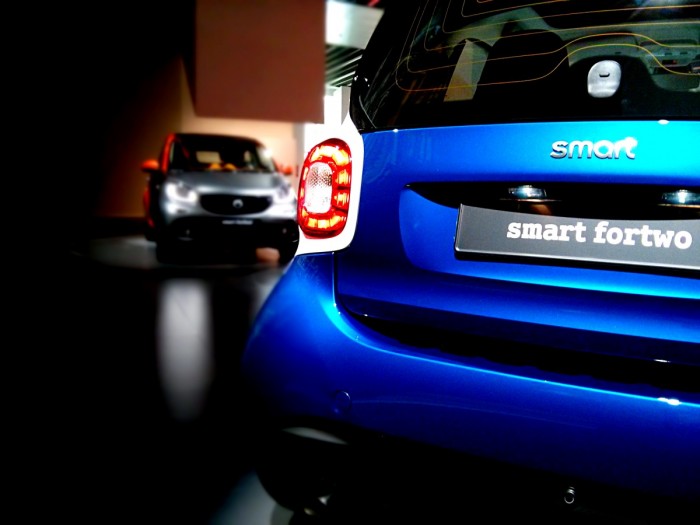 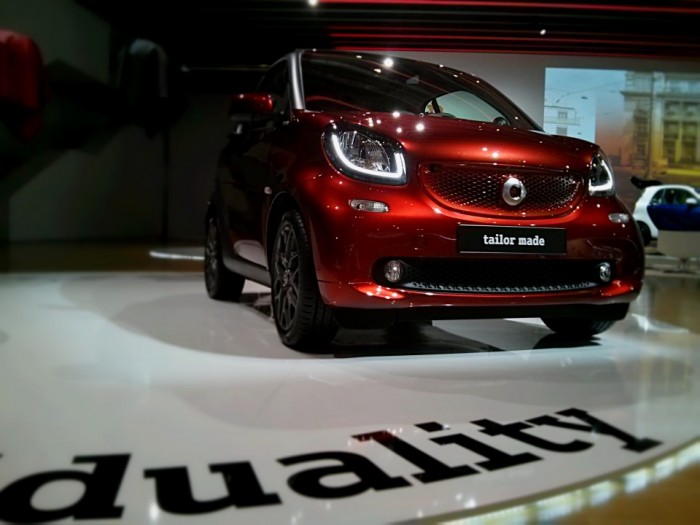 Slide in to a 2015 Smart and the good news keeps on coming.

It’s the perfect amalgamation of quirky modern (but not OTT) sculpture with the right premium tactile feel.

When I probed for distinction between the sister Twingo and the Smart(s) our escort for the event stated with some confidence, “90% of what the customer sees and touches is all Smart”.

Sitting here, now, I believe her.

Most of the control surfaces are high quality to the touch- the steering wheel being finished in a lovely soft leather.

The design is just ‘quirky Smart’ enough but without impeding on functionality (too much).

These cars really have grown up by some margin. Vital for their viability as an everyday proposition.

Many of the cars are largely trimmed with a perforated fabric that looks very space age. It might be cheap, but it doesn’t feel it.

The seats neither offend nor amaze. They look nice and do their job.

The ForFours rear seat capacity was impressive with head and legroom to spare for an average sized chap with the seats themselves being easily foldable for extra load space. 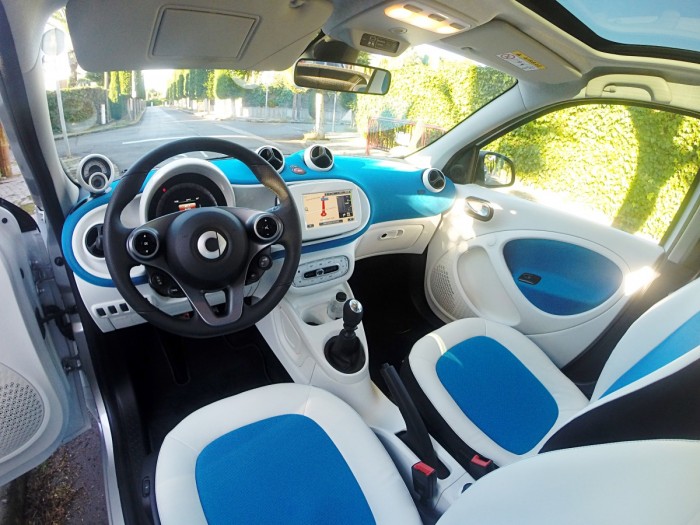 The UI on the optional ICE system is relatively intuitive, although somewhat distracting.

Its offset to the drivers line of sight is too great so inputs require a touch too much attention paid away from the drive.

Like in the C-Class Mercedes, the pod-like installation feels like a bit of an afterthought in an otherwise sound interior constitution, but is less offensive in the more informal context of the Smarts cabin.

The screen is responsive but the Sat Nav was a little bit dim witted- struggling to keep up with our progress and occasionally getting confused in more intricate parts of the city. There have been far worse efforts, but its certainly not bothering google maps.

The conclusion here is that without too much nitpicking the new Smarts feel and function every bit as premium as the price suggests. 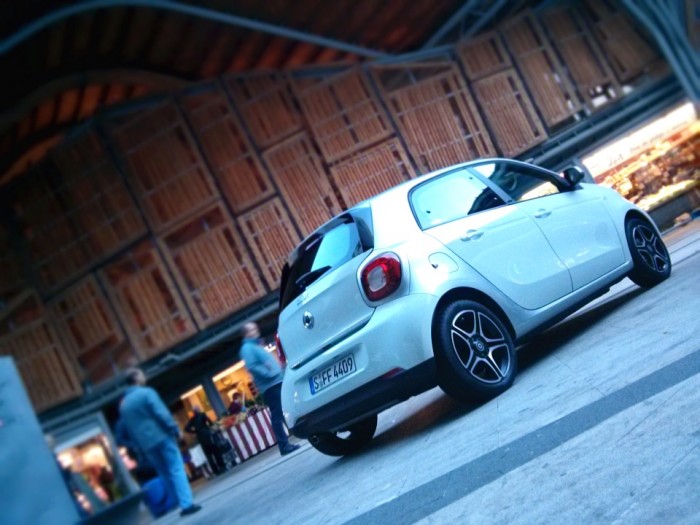 There are two engines and two transmission options. The ForTwo works best in its urban role with the DCT and 75 BHP motor.

For general city motoring the double clutch transmission (which is still in prototype stage and wont be available until next summer) is a work of genius compared to some of the half wit automatic efforts of Smarts bygone.

Shifts are seamless and the selection is intuitive allowing for uninterrupted and jerk free progress- provided you don’t press on too hard.

It looks especially impressive in comparison to the standard manual which in isolation isn’t a bad shift, but sits uncomfortably with the tiny torque-less motors in the ForTwo.

Clutch control with next to no bite is a fine art- a painfully obvious shortcoming given the ease of the rest of the drive and the frequency of its interference in city driving scenarios.

The DCT in the ForTwo manages everything just so. Get a lick on and it comes up a bit dumb but for simple motoring it nails it. 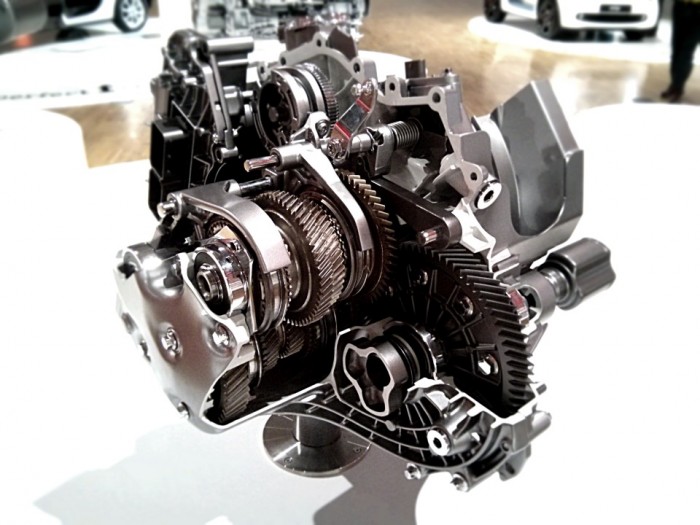 Our ForFour revealed that the manual felt more accomplished outside of the urban setting as did the smaller turbo’d 90 BHP engine that we first tried in the ForTwo.

Though numerically punchier than the non turbo, its power band was difficult to use in city stop/start driving. The naturally aspirated was linear enough to be sweet, though it could use more guts itself.

It sounded mega, too. Both engines can be a bit raucous if you’re not in the mood. 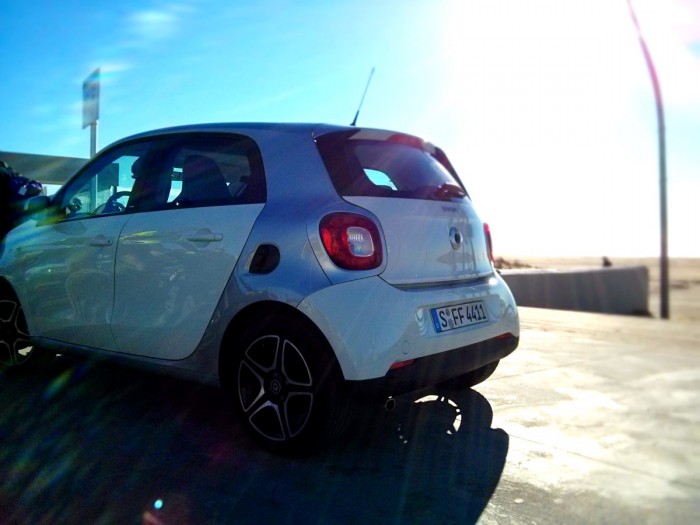 The ‘rest of the drive’ brings me on to the sublime steering. It is a 10/10 city driving experience changing direction in the new Smarts. The incredible lock to lock range borders on witchcraft.

Though perfect for the ins and outs of the heart of Barcelona town, control of direction turns a bit crude and unrefined at higher speeds in the stumpy ForTwo but its a slight bitter aftertaste for an otherwise sublime dish.

If your range of driving isn’t restricted to the town then the longer more stable ForFour is a better steer more of the time. A degree of manoeuvrability is sacrificed for the extra length and doors but it makes for a vastly more diverse dynamic palette in the ForFour- feeling comfortable at 7/10ths pace on the motorway and sweeping back roads. 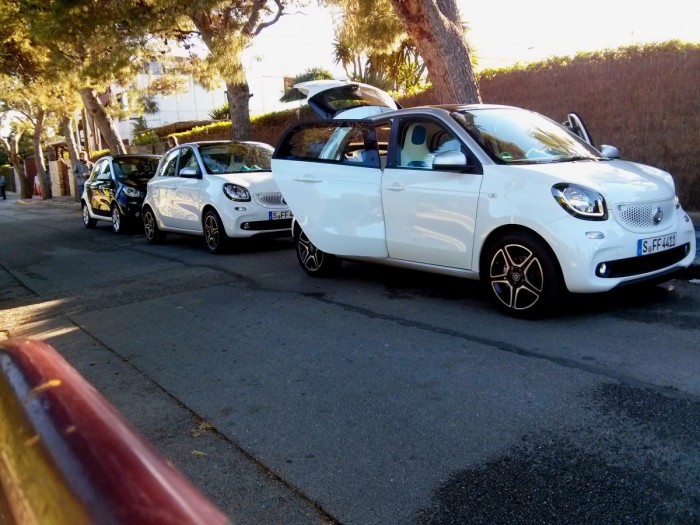 The damping was too capable to test in the city on the ForTwo, but the undulating left-to-rights of the coastal roads put the ‘Four to the test. It held its own with impressive class.

Macpherson fronts similar to the construction on the new C-Class take most of what you can throw at them on the road.

Longer spring travel has made for more compliancy and a decent ride, too.

Braking is responsive though on my ForTwo there was an inch and a bit of dead pedal before the anchors dug in leaving little travel left to vary the application.

The resulting grabbiness was slightly annoying but not too difficult to master given some practice. 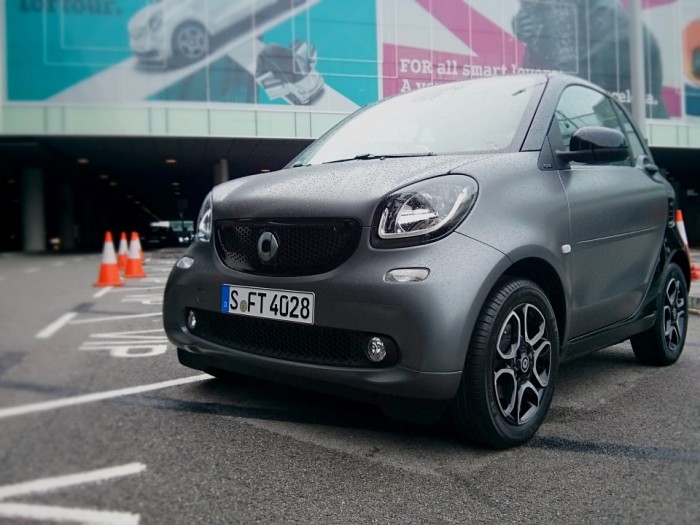 If you want to buy a very very good small city car, for perhaps the first time, you can buy a Smart.

In ForFour guise you can seat four, lug stuff around and turn on a penny all in one of, if not the most accomplished premium packages in its segment.

The ForTwo does all of that too, but with less friends.

Gearbox and engine choices are dependent on your intended workload for the cars. All combinations lend themselves well to a leggy varied motoring schedule, whereas the urban environment obviously best suits the ForTwo where the DCT and 900 cc naturally aspirated motor will serve diligently.

They’re not too brash but are by no means boring, are infinitely more tasteful and of a higher quality than their rivals and therefore, I think, worth the extra dollar over the Twingo.

The ForTwo has its foibles but is leaps and bounds ahead of its predecessors and a few informed decisions when it comes to what’s powering it through what gearbox can sort most of them.

Smart has well and truly grown up, substantiated that premium and all without losing a shred of its iconic sense of humour. 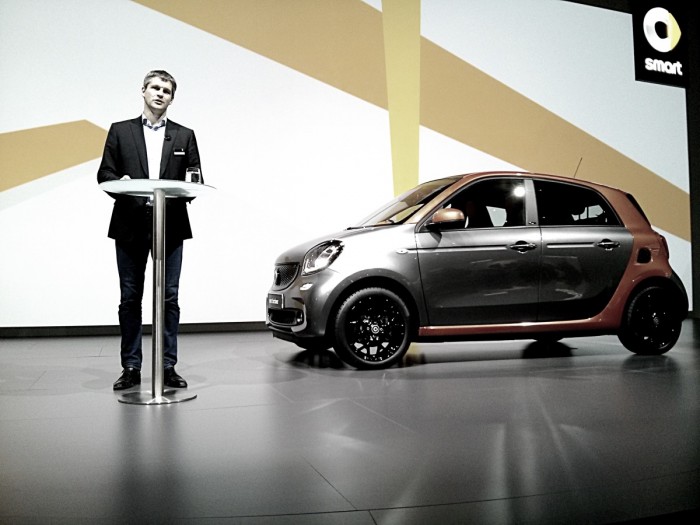