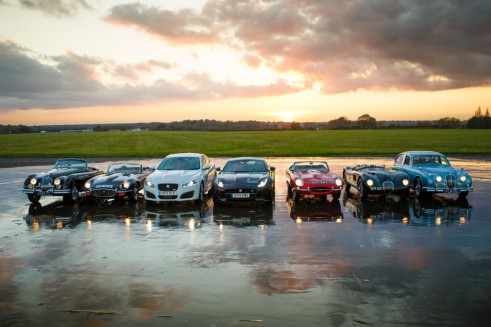 Jaguar is a name synonymous with history, a brand dripping in heritage so strongly any failures to uphold their historic brilliance are looked upon with almost seething fury.

That history is normally only found collated in books, or when Lord March invites enough of the well healed to Goodwood to show off their classics.

But what if there was a way for you to physically sample it? That sounds like a glorious pipe dream, but it isn’t, it’s real and it’s here, now.

The result of four years work this is Jaguar’s new Heritage centre, tucked away in the Warwickshire countryside astride an old World War II airfield. 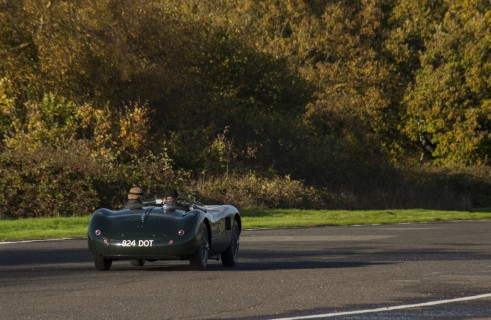 Here members of the public will be given the amazing opportunity to drive some of the firm’s most iconic cars.

Today they’re letting us have a go, just a couple of days before customers who have forked out anything between £99 and £2,000 arrive on site.

The Fen End facility, near Kenilworth, a short drive from Birmingham, was originally an RAF base before being taken over and used as a test track by Prodrive.

A few years ago, after Jaguar came up with the plan to run customers in their newly acquired fleet of classic cars, they bought it, planning to use it both for Heritage and their new, Special Operations skunkworks. 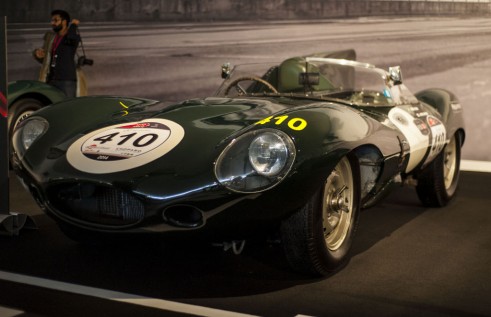 Now they have fashioned a small, yet perfectly formed, 1.5 mile test track and a visitor centre housing their “perfect 10” collection put together by Lord March and AC/DC’s Brian Johnston.

When you walk into the newly built hub you know a special day has to await, just look at all that history presented in front of you, oh, and in our case Sir Stirling Moss is here.

Jaguar acquired this smattering of their own past only recently, a collection of hundreds of Jaguars bought for precisely this purpose, , sorry anyone, the chance to have a go.

Leaving the amazingly warm building we head out into the slowing rain for our first spin round the track, it’s time to sample something truly spectacular. In my case the menu begins with almost the main course, somehow, despite a large height difference between me and a 1950’s racer, I’m folded into a beautiful C-Type. 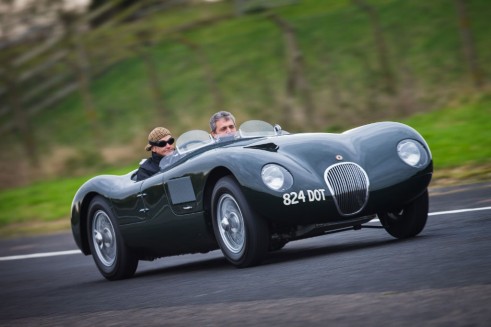 The C, developed from the XK120 roadster, won Jaguar’s first Le Mans in 1951 at the hands of Peter Walker and Peter Whitehead, and followed that up with another triumph in 1953.

Today Jaguar are offering anyone a chance in a modified version, it’s got a roll cage and a new body, but to all intents and purposes the car is the same.

So in I jump, no, contort. The seating area is tiny, at over six foot I stuggle to hunker down into the leather the way I should, the wheel digs into my knees and changing from accelerator to brake involves an act nothing short of gymnastics. 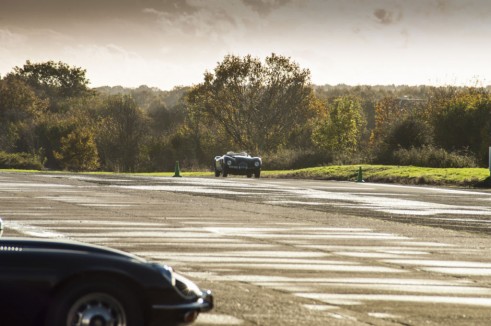 But, it’s worth it. Once you’ve turned the key and pushed the tiny started button and the 3.4 litre, straight six, roars into life.

It’s a whirlwind of spray, noise and the smell of unburnt petrol, the track is still damp from the morning November downpour, but the doesn’t seem to bother the C. This lightweight racer is exhilarated, excited, happy to be out and running.

Three laps is all we get, we’ve not paid Jag for this day, but it’s enough to fall in love, and build a sense of awe for the likes of Moss, who piloted the C for 24 hours, pounding round and round the famous French circuit with absolutely no protection from the elements. Manhandling a car with no power steering and taking care over every precise gearchange.

As I excuse myself from the tiny cockpit I am in pain after just a few short minutes, and in desperate need of a cup of tea, barely able to comprehend what I’ve just done.

The C will be part of the two top end packages available from the centre, a half day Le Mans experience alongside the D-Type and the full day ‘Grace and Pace’ where lucky punters will get to drive the lot. 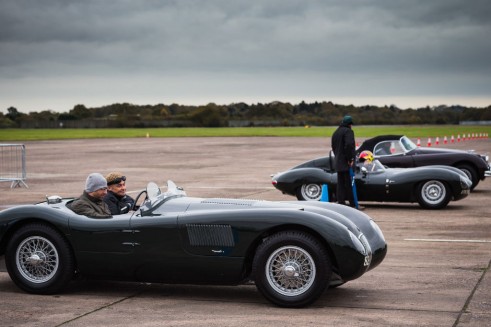 For us this morning holds gentler things to come, we’re going under cover this time, shutting the elements out with the folding roof of the XK150, a beautiful white sports car that arrived on the scene in 1957.

The wonder of this is the interior, amazingly for a car that was designed over fifty years old this is a one you could genuinely live with today. 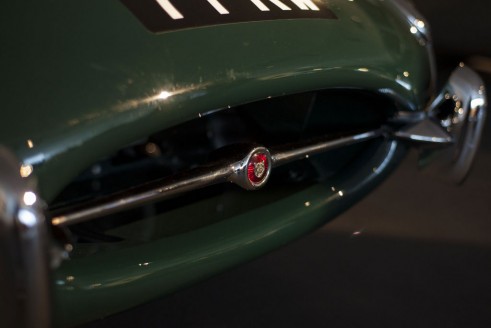 But the leather is soft, the dials are few and uncluttered and the engine is refined and torquey, man does it have some torque.

The heaviest of the three to steer, don’t even try to turn that humongous, bus driver style, wheel if we’re not moving, the XK enchants with that 3.4 litre.

The track contains two quite tight turns, one of which is a hairpin that even the F-Type has to consider second gear in. The XK150? Nah, third will do, third for the whole lap in fact.

Barely a thousand revs are showing as we exit the corner, enough to make anyone twitch over the clutch, hoping to catch the shuddering mass of metal in front before it stalls. Or at least that’s what you expect.

There’s no shuddering here, oh no, that would be far to unrefined, come off the brake, put your foot down again and we’re off with no problem. The XK is a sumptuous cruiser, a Grand Tourer in every sense of the word. 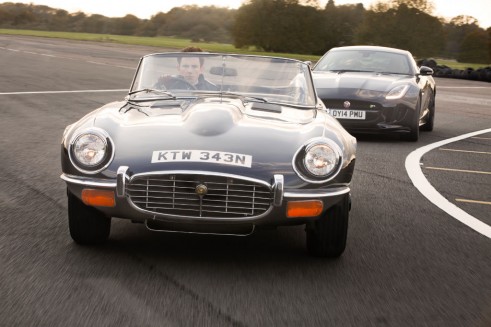 Next we have possibly the most iconic of Jaguars, the car that spawned the modern day XK and the superlative crushing F. It’s a car which constantly tops polls worldwide of the best looking vehicles ever designed, the jaw dropping E-Type.

If you’ve never wanted to drive an E-Type I’m not sure we’d get on. This car screams cool, it oozes charm and finesse from every panel, even the driving position is almost hilariously laid back. This is the car young fans have dreamed about for decades since  it arrived on the scene to shake up the motoring world.

The black number we slip into has a 5.3 litre V12. It originally produced over 500 horsepower, but several of those have gone into the annals of time.

What hasn’t trickled away is the noise, a rumble so pleasing on the ears we needed a lie down, a view over the long bonnet so pretty that Turner himself would have sat down and begun to sketch. 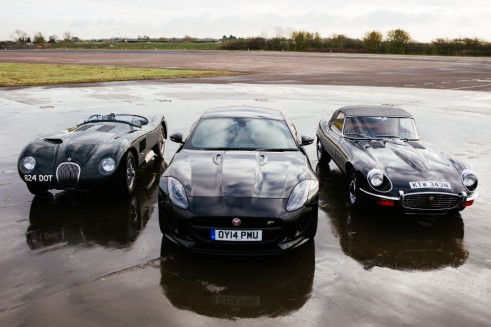 By far the easiest of the classic cars to drive the E, being the newest, is the only one with power steering, but, as it is an early form, the less said about that the better.

It’s refined and beautiful and, despite the big lump up front, rather nimble through the corners.

Jaguar Heritage have acknowledged the iconic status of the E-Type by building it into no less than four of the eleven experiences on offer.

Customers will be able to sample a quick passenger ride, work their way through all three iterations of the E, sample it with everything else in the ‘Grace and Pace’ pack or, and this is for us the most exciting opportunity, put it head to head with the stunning modern F-Type.

That last one shows how far the world has come, but also how much this line up has influenced the future of motoring.

At the end of the day we were allowed out for a spin in both the F-Type S and F-Type R we’ve previously sampled on the road.

Putting the modern F against it’s grandfather doesn’t put the E down in any way, what it does is highlight how similar they are, the clear heritage that runs between the two. Both lightweight, two seater sports cars, both absolutely drop dead gorgeous, both so easy to fall in love with.

But, be prepared for a shock here, nothing I’ve mentioned so far was my favourite drive of the day. 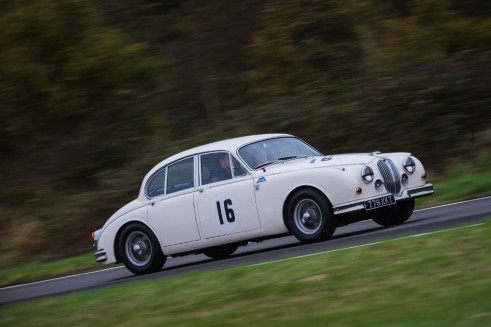 That title goes to a little unsung hero waiting at the back, a white four seat saloon with the number 16 emblazoned on the side.

The Mark II is an unassuming little beast next to all this firepower, a small four door family car that’s normally best remembered for sauntering Inspector Morse around the Oxfordshire countryside on ITV3.

Not this one though. This is the racing version, the car that took on all comers in the predecessor to the modern day British Touring Car Championship.

Step inside and it’s bare, gone are all the leather additions, the weighty rear seats, the heavy carpets and all that could distract in a stripped out speedster.

Instead we have a four-point harness, a starter button and a wheel, everything you ever need. 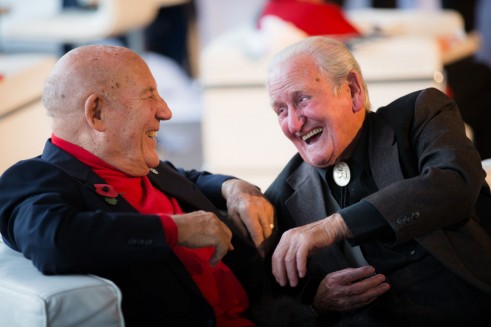 This car is an absolute joy to drive, so eager, so excited and willing to run and run and run. The II has throttle response like you would not believe, you barely need to think about moving and you’re off.

Three laps fly by, and I step out with the biggest grin of the morning, which is exactly what these experiences are about.

For £195 punters will be able to experience the Mark II alongside it’s modern day equivalent, the mighty XF-R. They make quite a pair. Both designed to transport families in executive comfort, but both leaving any competition in the dust.

Sadly for me this is where the day hits disappointment, through no fault of Jaguar’s I should add. 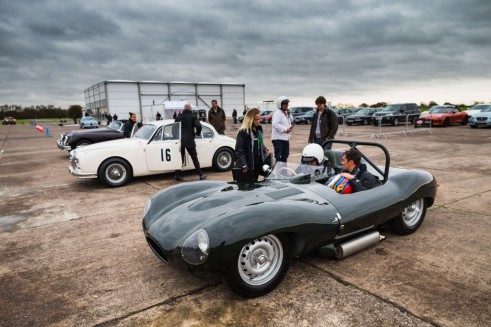 Last on my list for the day was the stunning Jaguar D-Type, possibly the most famous of the big cat’s Le Mans racers, fitted with a roll cage and available to you in four different experiences.

Unfortunately it has a racing clutch, one which unfortunately foxes a few of our journalistic colleagues. So, shortly before it was to be put in my stewardship the clutch uttered one final crunch and gave up the ghost.

Fortunately our award nominated youngster Ethan Jupp did have a go in it and I think we can safely say that he enjoyed it, even if the experience was stifled by the rapid arrival of a bee.

But that can’t really spoil a day of this magnitude.

The new experience centre is a perfect way for Jaguar to allow people to taste its sumptuous heritage. Not only that but the packages they have put together allow you to truly see how that history is channeled into the modern day product. 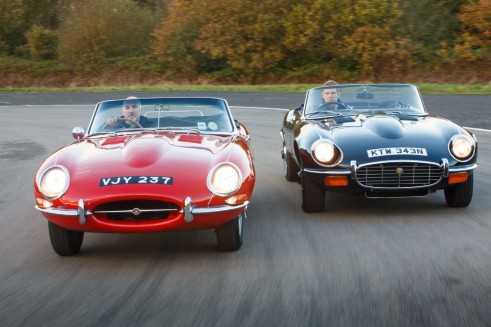 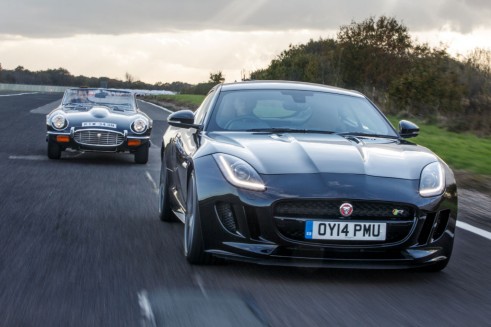