While the worlds motor sport journalists descend on Melbourne, and the Australian Grand Prix, millions the world over (or in Europe certainly) set their alarm clocks for some early morning of motorsport action – the first of the year for a number of them, however the NASCAR squads will already be on their 4th event of the season!

If I ever get the chance to attend a NASCAR event live this would be one of the tracks I would try to visit, I don’t know why, but there’s just something about this venue that draws me to it.

Its ahead of maybe Daytona or Talladega,

A half mile banked oval racetrack, the lap record is less than 13 seconds, however the NASCARs will only(!) be averaging 14-15 second lap times or around 129mph!

Yes, this is the fastest half mile on earth and, with 43 reasonably basic race cars battling over 500 laps for around 3 hours expect sparks to fly!

NASCAR racing is the most popular sport in America, yet it gets very little press outside its shores, so here’s a little bit of a background on what to expect.

5.6 litre 860+ hp V8s mounted to 4 speed manual gear boxes. Fuel injection only arrived a few years ago and they run on steel wheels!

And yet these brutes will run at an average race speed of up to 188 mph. Side by side constant and consistently.

While the pit stops have to be factored in to the race strategy – as in any form of motorsport – with NASCAR running on [often] shorter smaller circuits the safety car or “full course yellow” that will inevitably occur will have the “spotters” and “crew chiefs” making frantic calculations on whether or not to pit.

In circuit racing small incidents can be covered with localised yellow flags, and the race continues while the marshals clear the debris, in NASCAR pretty much any incident brings out a full course yellow and, on a half mile oval making the right call on pit stops can be the difference between fighting for the lead and going a lap behind.

While we are on the subject a quick explanation.

Spotters: The spotters sit high up in the stands with a bird’s eye view of the track and are in radio contact with their driver (one spotter per driver). They keep the driver informed as to how close the cars they are racing are to them, as often they will be running in packs of two or three cars wide with little room for error.

Should an accident occur these guys will also have to guide a racing driver through a wreck while he fights against his own instinct, frantic stuff! 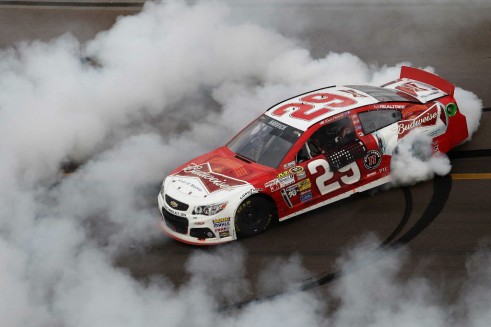 It might take a while to get going at 3+ hours on what might look like a fairly basic track layout but – like me in the past – as the race goes on you’ll slowly find yourself inching further towards the edge of your seat as the clashes become bigger, the pit lane becomes busier and the yellow flag periods become more frequent.

NASCAR. 20 Million American can’t be wrong. Can they?

NASCAR is shown in the UK on Premier Sports TV available via Sky and online.

Here are some extended highlights from 2013 to whet your appetite:

All images courtesy of – nascar.com