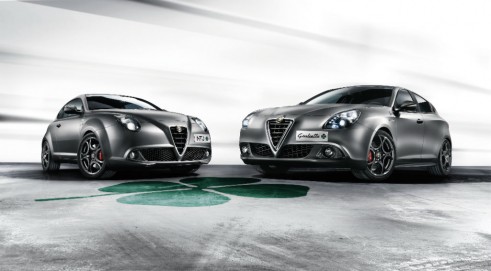 The Giulietta will be powered by the same 240 HP 1.8 litre turbocharged engine that sits in the Alfa Romeo 4C, it also shares the 4C’s six speed TCT gearbox.

To mark the launch, Alfa Romeo is introducing a special Launch Edition Giulietta Quadrifoglio Verde. With a limited run of just 500 vehicles, 100 of which are destined for the UK market, the Alfa Giulietta QV Launch Edition is further enhanced with carbon spoilers, front and rear sports air dams and side skirts, as well as 18″ alloy wheels with a five-hole design and a burnished anthracite finish.

The Alfa Giulietta Quadrifoglio Verde Launch Edition will be available in Alfa Red or in Competizione Red (triple coat) as well as the exclusive Matte Magnesio Grey.

Interior upgrades on both cars include new leather and Alcantara® seats with one-piece backrests, as well as a new steering wheel and new QV instruments, contrasting white and green stitching, new QV instruments and a “Competizione” carbon-look dashboard.

Prices will be unveiled at Geneva.