We put Pirelli’s new All Season tyre through its paces 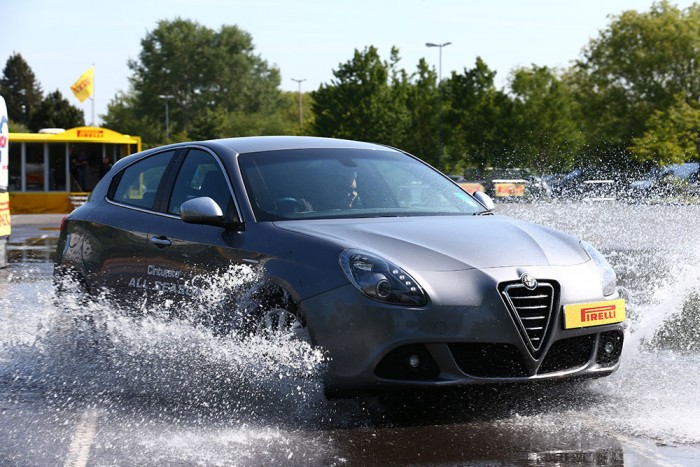 Manufacturers have been doing everything in their power to persuade us otherwise since Dunlop’s seminal 1993 TV advertisement, yet I have to admit that sitting in the passenger seat of a Ferrari FF, engine howling at 7,000rpm pulling doughnuts in the snow on an English summer’s afternoon, for a moment I’m absolutely convinced.

The reason I’m in the Ferrari is that we have been invited to Pirelli’s presentation of their new Cinturato All Season tyre at Tamworth SnowDome. Following a hearty lunch we head into the briefing room for the presentation.

In the UK, due to our relative lack of snow, we pay little regard to winter tyres, which in many countries are a legal requirement throughout the winter months.

There are two significant differences: firstly they have a different tread pattern and secondly they’re made from a different rubber compound which stays soft and maintains its grip at low temperatures.

There are several drawbacks: they’re noisy, less efficient than standard tyres, less grippy and wear out quicker. They also mean an additional purchase of five tyres and wheels plus storage throughout half the year. One solution is all-season tyres which aim to offer the best compromise between winter and standard tyres.

Enter the new Pirelli Cinturato All Season tyre. Designed to offer the best all-round solution, Pirelli’s engineers have actually managed to exceed all their targets, producing a grippy, quiet and economical tyre which retains its qualities at low temperatures and offers excellent traction and control in wet and snowy conditions.

The tyre is intended for small to medium cars which are generally used for short daily commutes.

PowerPoint presentation over, we move on to a physical demonstration of another property of the tyre, Seal Inside™ technology. We see a nail deliberately hammered straight through the tread area of the tyre. It’s then extracted, leaving the tyre as good as new.

It looks almost too good to be true, but it’s a simple system: the tyre has a layer of sealant material inside which fills the hole when the nail is extracted with zero loss of pressure, allowing the tyre to continue being used, often without the driver even realising anything has happened.

Other than the layer of sealant the tyres are completely standard, allowing them to be fitted and used just like any other tyre.

Now the fun stuff begins. We head outside for a number of handling tests including braking hard in the wet while cornering and a timed obstacle course.

Apparently the All Season can displace a massive 31 litres of water per second which goes a long way towards explaining the reassuring performance in the wet. 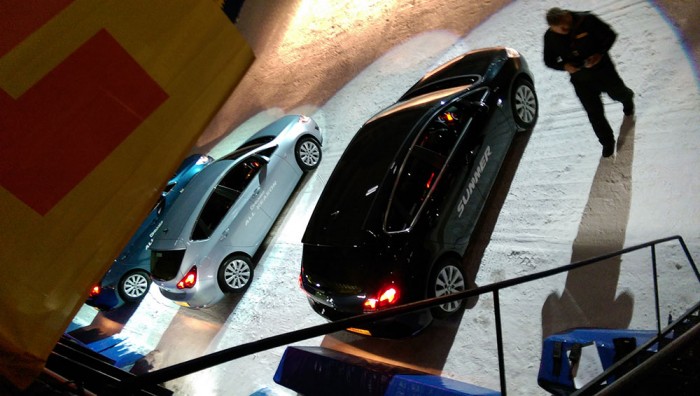 Now we head back into the SnowDome and onto the viewing platform overlooking the foot of the slope.

The temperature drops to a chilly -7°C and there on the snow beneath us is a line of Vauxhalls flanked by a brace of Mercedes M-Classes.

The snow is lit with coloured Pirelli logos and the air has the sweet smell of modern diesel engines. After a short briefing we head down a steep ladder to the snow.

Half the cars are shod with standard tyres, the others with Cinturato All Seasons and the aim is simply to reach the top of the slope which seems frankly crazy.

Our first car is fitted with the standard tyres.

First gear selected I give it some throttle and the car sets off slightly nervously up the slope. Almost immediately we begin to slow and within seconds the wheels are spinning as we come to a halt. We’ve moved probably 20 or 30 feet. I back down to the start and move on to the All Season car. 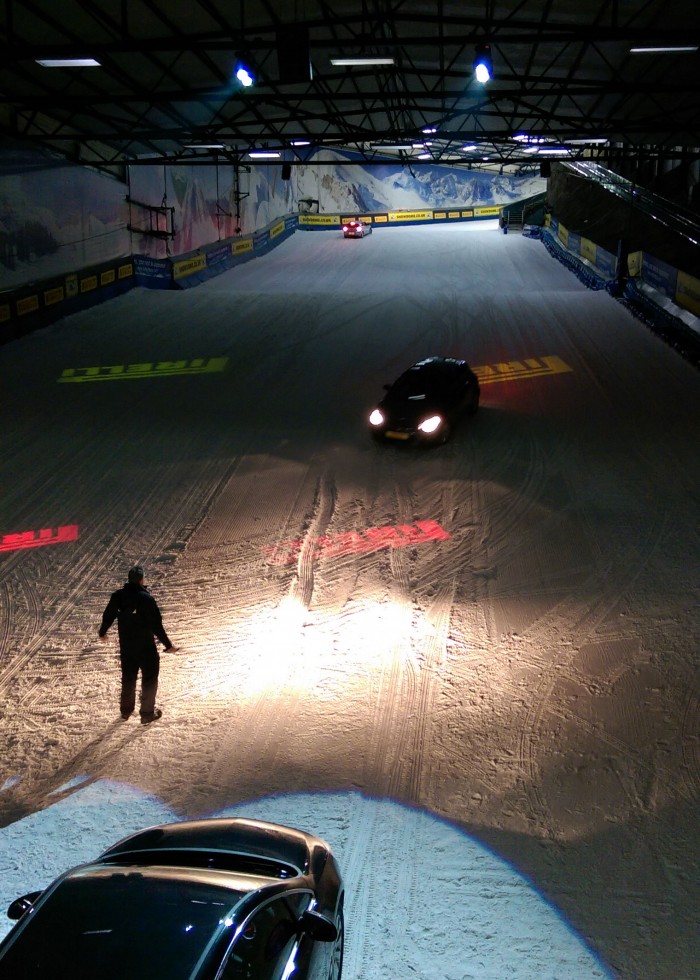 Now I confess while I’m expecting the tyre to be better, I’m quite astonished by the difference.

First gear, I punch the throttle as instructed and the car sets off, but this time far more confidently.

We come to the first crest and the car drives smoothly over it. A short flat section and then we’re climbing again.

Within seconds we’ve reached the very top of the slope. We turn, drive across the top, and start to descend. At one point I brake, quite hard and the car comes to a controlled halt.

Suddenly everything we were told in the briefing crystallises, and I begin to realise what a fantastic tyre this is in winter conditions.

I’ve driven quite a few times in real-life snowy conditions and it’s always been a bit touch-and-go. With this tyre any driver can have the confidence to know that they’re still going to be able to reach work on a snowy morning when their colleagues are all stranded at the roadside. Whether they’d actually want to is a different matter. 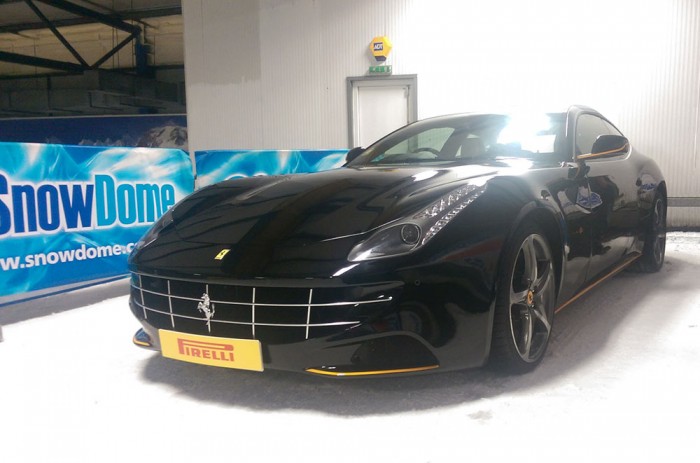 The highlight of my day is the Ferrari FF. I’m lucky enough to be one of the three passengers driven at high speed on the slope by a professional instructor.

The car is sublime, and the performance shows just how much confidence the right tyres are able to give in any conditions.

If you’re looking for a tyre which performs well on the daily commute as well as being able to ensure a safe journey in heavy snow, this tyre should be at the top of your list.

Pirelli Cinturato All Season tyres are safe in any weather condition, fully compliant with winter (M+S) tyre legislations and available in 15″, 16″ and 17″ sizes. Of the 21 sizes available, two of the 16″ and one of the 17″ are fitted with Seal Inside™ Technology (no tyre pressure loss in the event of punctures). 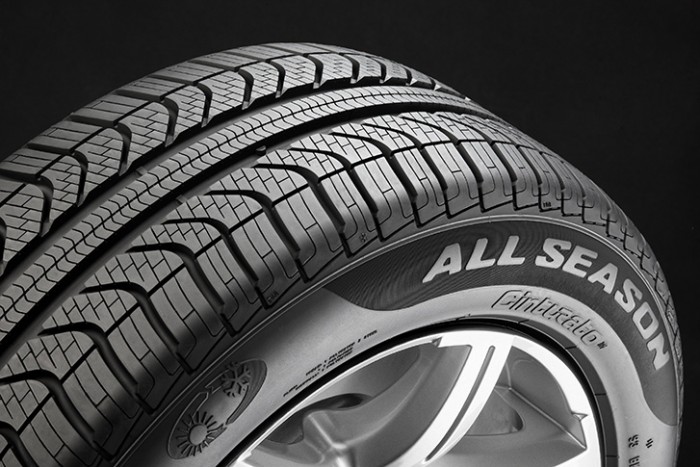