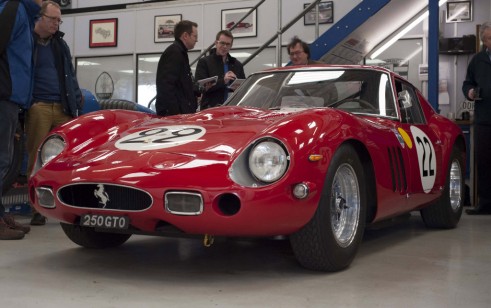 When someone said “one of these recently sold for about $46,000,000, but this one hasn’t sold for a while”, you knew we weren’t in a normal garage.

This was one belonging to  Nick Mason, the man behind the sticks in Pink Floyd, and Carwitter are here due to our friends at Zircotec.

Housed in two hangars amongst the English countryside Mason’s famous collection is so large the cars are packed in with barely a foot between them.

But it’s the Ferrari 250 GTO we are looking at, a gleaming red piece of art that has been set aside so the country’s motoring media can see how Zircotech’s coatings help protect the precious parts.

says Mike Hallowes, from Ten Tenths, the company which looks after this spectacular collection.

Since then it has raced every year of it’s life.

It came third in Le Mans that year, and last year it went to a rally all the way over in Italy.

Previously the owner has stated this is his favourite car in the collection, and as one of only 39 ever built I feel nervous holding a camera over it. 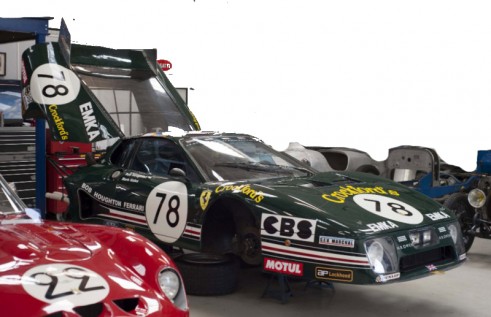 Next to it is a gleaming green Ferrari BB/LM, raced by former Pink Floyd manager Steve O’Rourke at the 24 hours in 1980 to 23rd place.

Across the hanger sits a white Lola T297, which Mason himself raced in the same enduro, finishing one place ahead of his friend O’Rourke.

The exhausts gleam white, protected by a Zircotec coating, but Ben explains to us this may not have been original.

Nick started 43rd and Steve was 44th. They had had problems in qualifying. 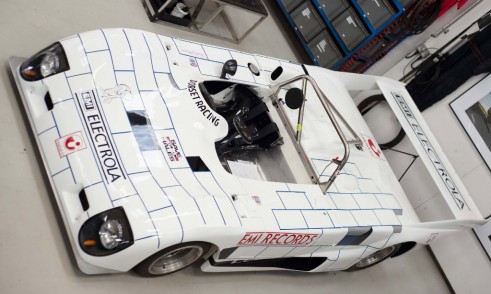 The white, with blue brick-style pattern, Lola sat the other side of a 1920s Bugatti in the hanger, which is adorned with race memorabilia and pictures of Mason in his cars.

Now a T297 Ben explains that it originally started life as a T295, before upgrading through the 296 to it’s current classification.

This is my favourite of the cars

Says Ben, twisting a metal rod up to the roll-hoop so he can heave the rear portion of the car up to reveal the 2.0litre 300bhp engine.

This is the reason we are here today, the inside of the panel is swathed in a material called Zircoflex, made by Zircotec and installed to protect the white paint from the huge heat of the engine.

After the three have been showcased we shuffle through the building’s ‘clean room’ and into the second hanger.

There we are greeted by a sight that sends you weak at the knees.

A 599 GTO sits by the door, next to a 512s Le Mans car, which in turn sits behind an F40. As if that’s not enough another 250, the MM version, and Jaguar D-Type sit among a gaggle of Maseratis, Aston Martin race cars and an Alfa 8C. 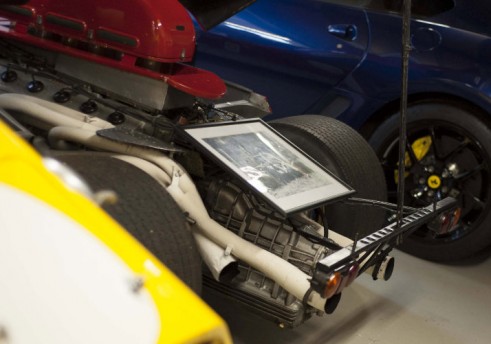 It was driven by Derek Bell in the scenes but unfortunately it caught fire, but it must be pointed out the car didn’t cause the fire, it was actually the electronics used to power the camera gear.

We have a great picture of that actually we can show you now.

Ben leaves for a second, and comes back with a framed black and white snap. In it a forlorn looking cameraman sits on the mangled wreckage of what would be rebuilt to form the car he props it on. 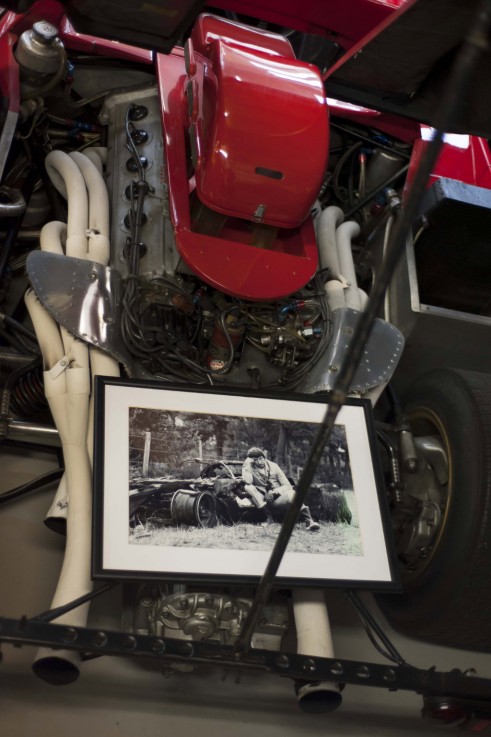 Derek Bell was burnt in the fire,” Mike adds. “It was sold and ended up sitting in a garage for decades before Nick found it and had it restored.”

Inside Ben shows us the old heat-resistant coating, which amounts to nothing more than a metal plate with a carpet-like material on the bottom.

You should probably stand back, we don’t know what this is really, could contain anything

He says, rubbing his hands on the now-frayed material.

Now we can use the Zircoflex which is self-adhesive, but in those days they had to either use some pretty powerful glue or, as in this case, rivet it on.

These cars weren’t special to them when they were built, they were just one of a few, designed to race at Le Mans. They were meant to break, they certainly weren’t meant to be still going forty years later.

At this point it’s getting a bit hard to keep focus, there are several million pounds worth of metal around me and my brain is attempting to work out which one I want to look at first.

As gorgeous as the Ferrari Daytona that Ben and Mike move on to is, the F40 is calling me. 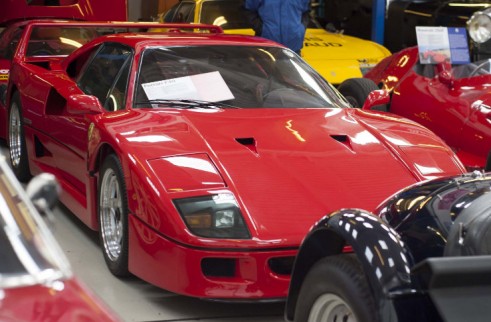 Sat just an inch or two in front of the 512S and nudged up to a Frazer Nash replica the F40 still stands out, even in this company.

It’s sharp, iconic lines are polished to shine like the first day it rolled off the production line, at the back it’s gorgeous 3litre V8 is visible through a plastic rear windscreen in front of the square rear wing. 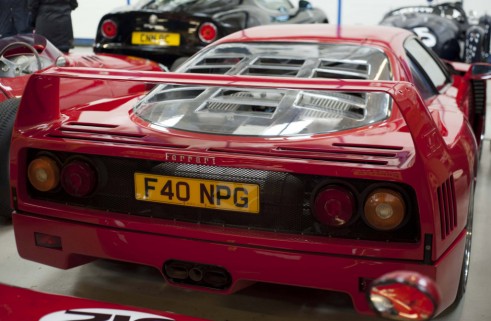 Nearby sits the almost exact opposite smooth lines of the D-Type. Raced at Le Mans in the mid 1950s the D-Type is almost flat until the aerodynamically styled driving pod, which controls the flow off the open-topped cockpit.

The beautiful D barely comes up to my knee, and is completely dwarfed by the giant Bentley 4.5 litre that sits behind it. The Bentley never managed to win Le Mans, unlike it’s illustrious predecessors, but Mike explains that it did succeed in creating something – this magnificent collection.

This was Nick’s father’s car, he used to watch his father race this when he was young and it sparked all of this.

His father was a cinematographer, and he used to race this in his spare time, that’s where Nick got the bug I think. 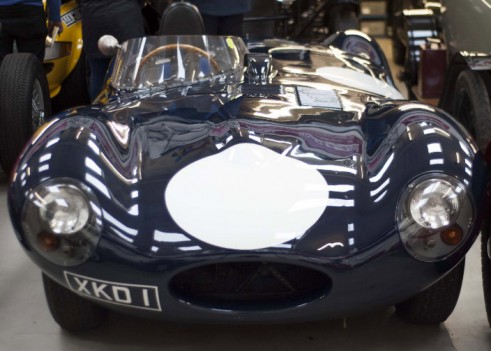 It really is a magnificent collection, I could spend hours in here, but now our time is up, but for a cup of tea and a slice of Zircotec cake – sounds gritty, tasted lovely.

Walking out past the 250 GTO again I’m reminded that the $46,000,000 paid for another recently is the same as a Francis Bacon painting also went for, and, I know which one I’d rather look at! 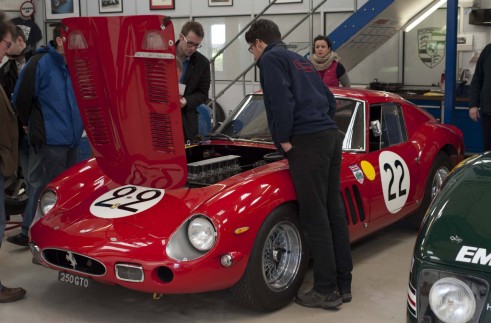 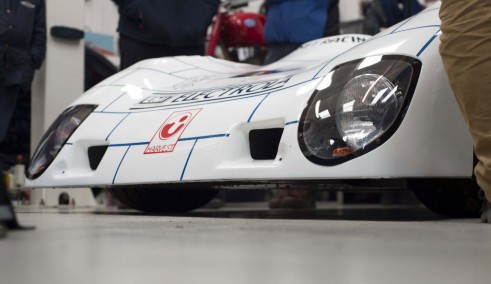 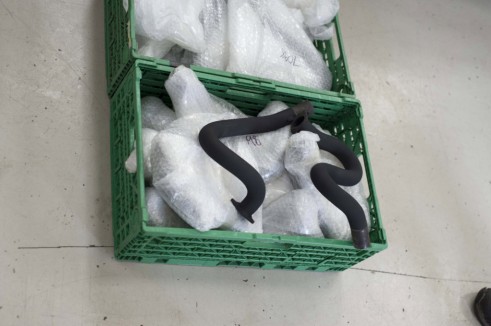 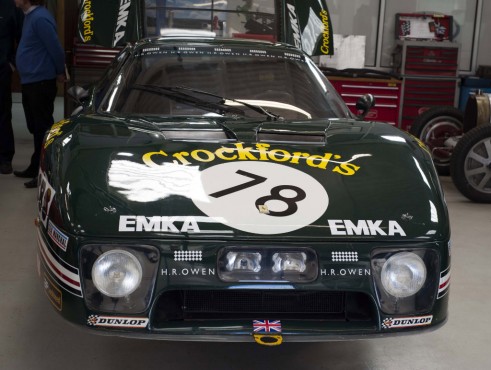 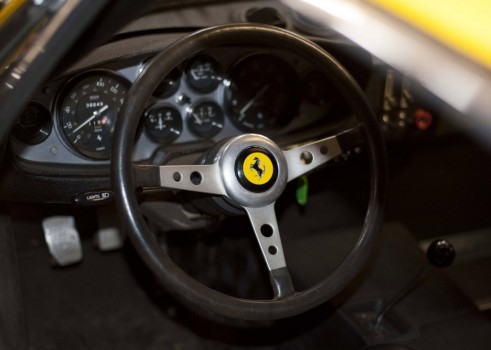 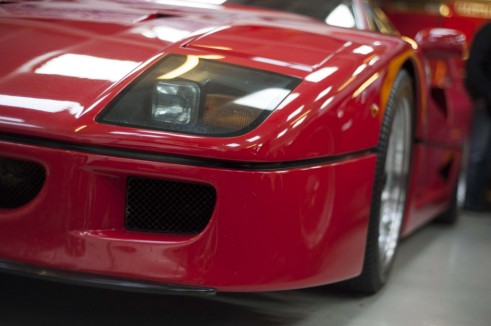 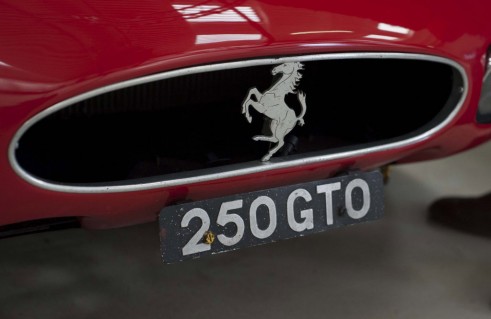