Dash cams are still on the rise, you probably won’t go a day without seeing one nestled behind the rear view mirror of the car in front whilst you sit in traffic.

Some of them can cost nearly £300 and are laden with all sorts of gadgetry. But what about the more affordable end of the scale?

The Thinkware x350 costs around £100 – £130 depending on where you buy it, so its in the middle ground when it comes to super budget options and the premium offerings. 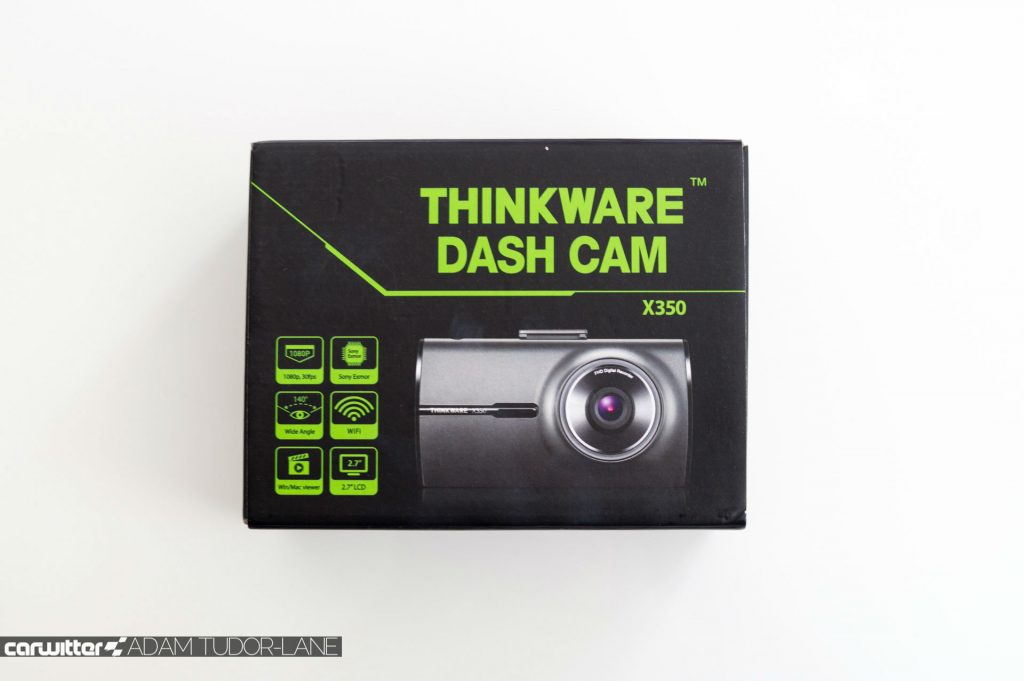 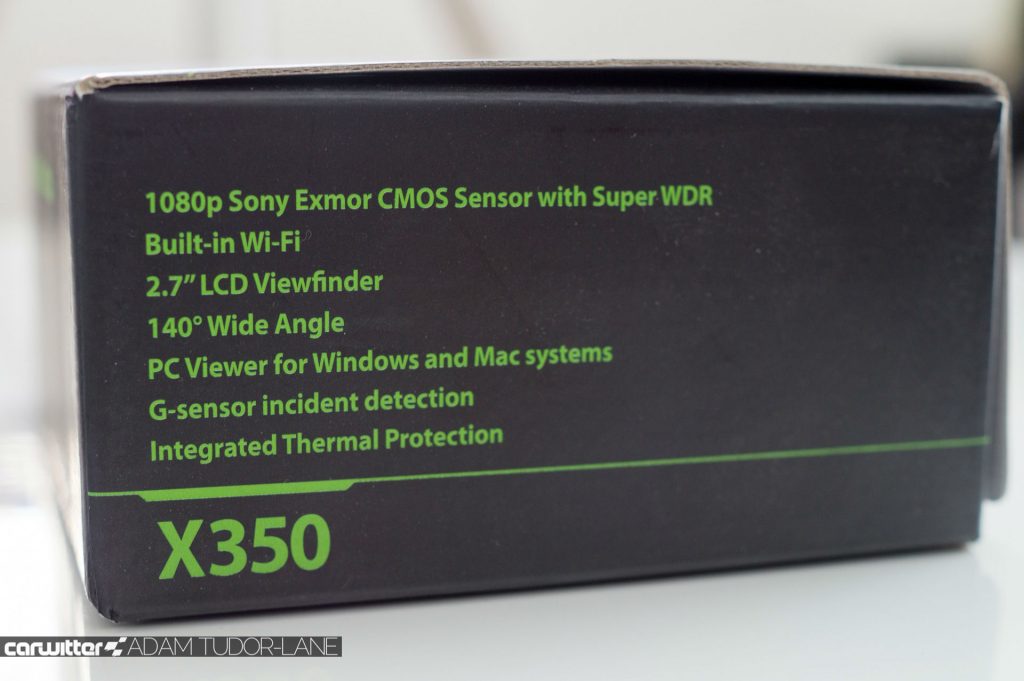 It’s a Wi-Fi enabled version of the lesser Thinkware x330. That is literally the only difference between the two.

So what does the Wi-Fi have to offer? It allows you to control the dash cam and configure it’s settings, which is far easier than the fiddly small buttons on the unit.

It also lets you view the real time recording view, as well as download and view recorded footage on the device all from the Thinkware app for either iOS or Android. 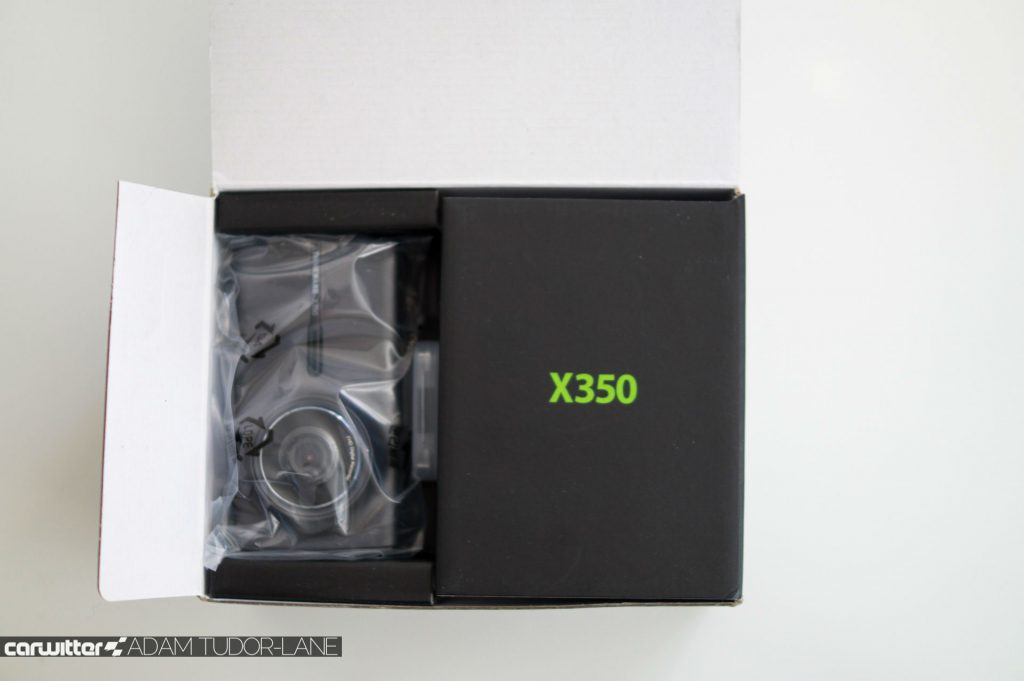 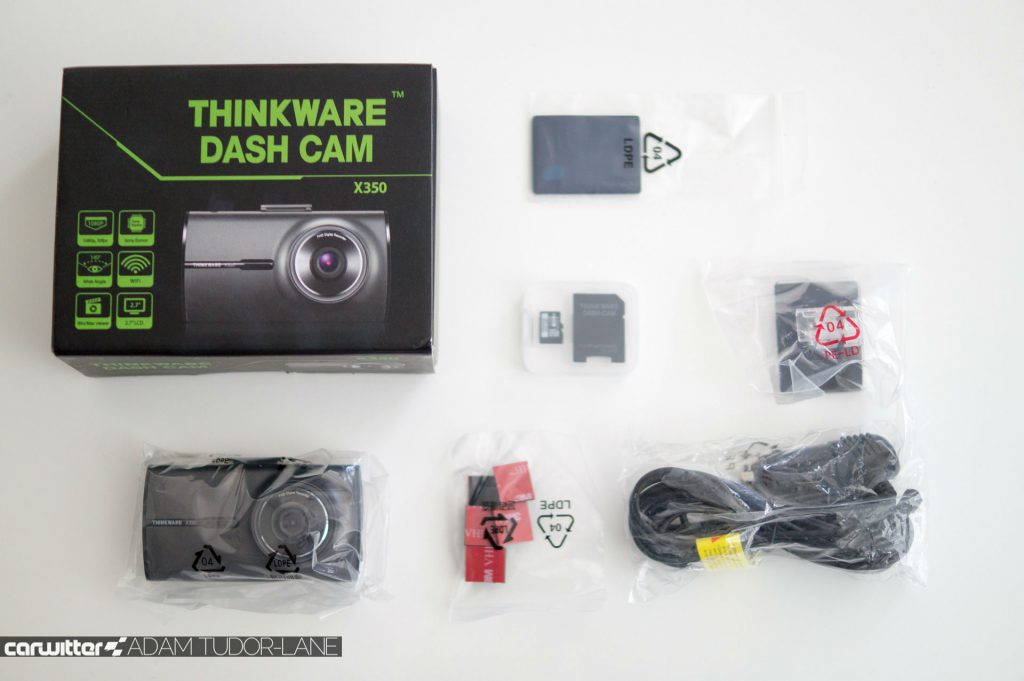 The x350 is fitted with a 2.19 megapixel camera with a 140 degree wide viewing angle. All of that runs through a Sony exmor CMOS sensor, those are renowned to be good.

Flipping it over and you’ll find a 2.7″ LCD screen and a row of four buttons, these guide you through the menus and the bottom one starts/stops recording.

In the box you’ll find an 8GB microSD card and a four metre power cable.

Up top on the unit you find connections for the power, and an external GPS receiver. One of those will set you back around £30.00.

There’s also an optional hard wire kit for all Thinkware devices, these cost roughly £15.00 but don’t come with a fuse just bare wires…which could mean you need a pro to install it.

Full specs of the x350 can be found here on Amazon. 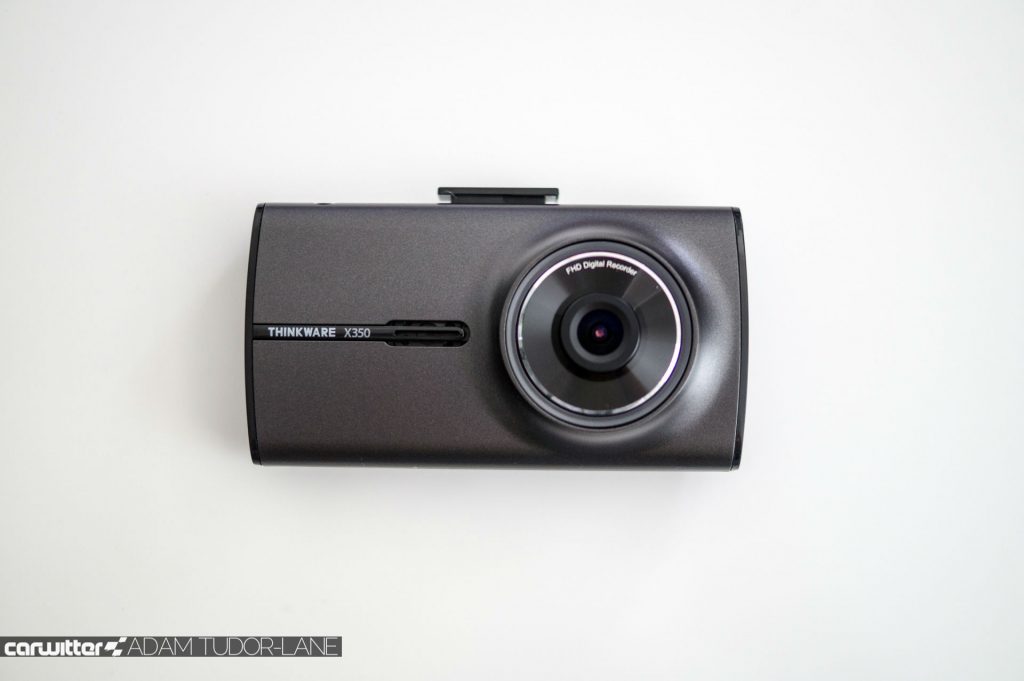 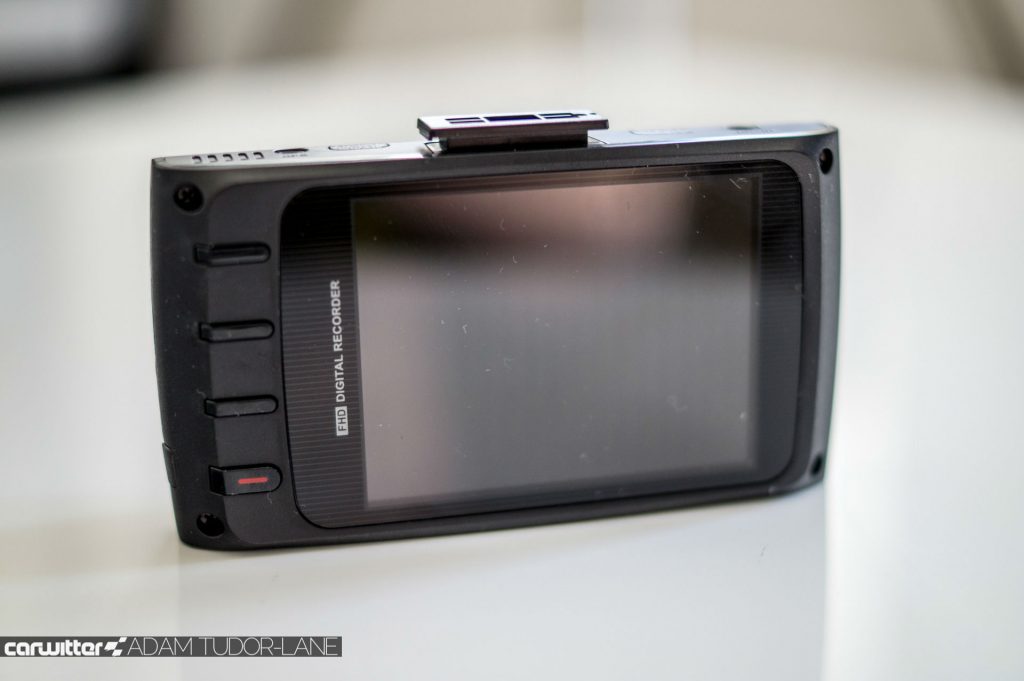 In the box you only get a permanent 3M tape stuck mount, fine if you only have one car, but a pain if you ever need to move it.

The 12V power adapter doesn’t feature any USB ports and the cable is moulded directly into the socket. Meaning the x350 hogs all the juice, so forget charging your phone. 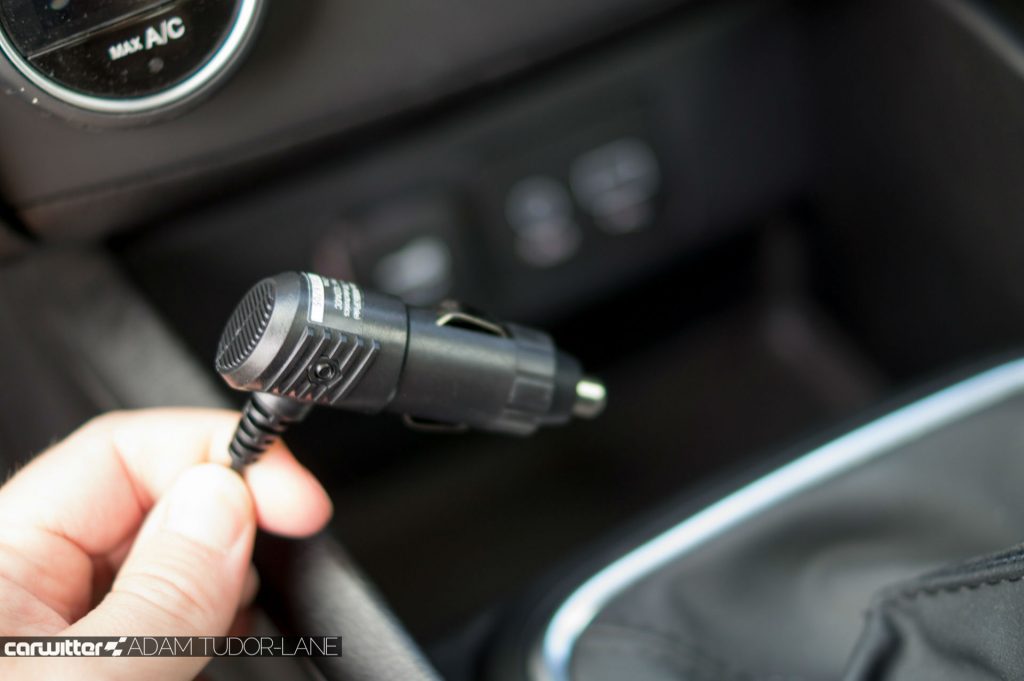 Thankfully Thinkware are at least generous with the amount of cable they give you, which makes routing it round the dash and up the windscreen easy.

You’re best off plugging in the power cable before you try and route the cable though, as the power socket is on the right hand side. You have to slide the camera into the windscreen mount from the right, meaning it all gets a bit fiddly and impossible when putting the camera up behind the rear view mirror. 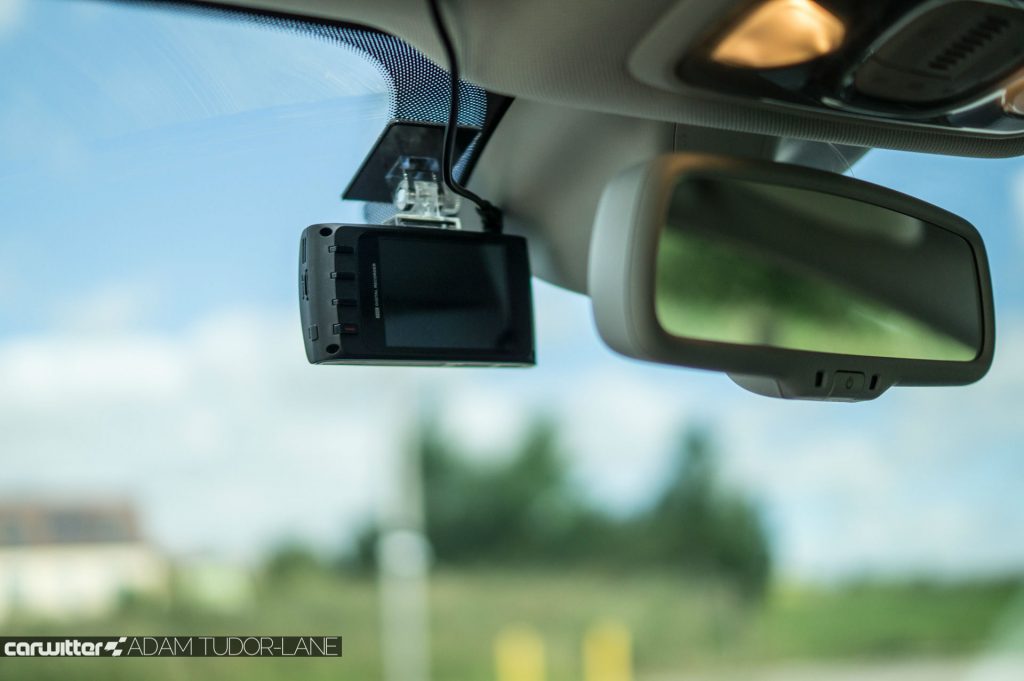 Once on the road the annoyances continue.

The Thinkware is by default set to a super twitchy mode, this makes it think that every pothole, lump and bump is you having an accident and or possibly dying.

So it beeps and flashes.

Once you go into the settings and work out how to lower the sensitivity…not easy as it’s randomly called ‘Cont. sensitivity’.
Sliding that all the way down to its lowest position means you can drive without being pestered constantly.

As for the quality it’s really very good.

The dynamic range is high, making the shadows and darker areas viewable and number plates are easy to read.

Continuous recording happens as soon as the camera is automatically powered up with the ignition.

Recorded files are split into 80MB chunks, which is roughly 60 seconds of footage. This can’t be changed and often means an event can be split over a few files.

If an event is sensed by the camera that gets saved as a 20 second 40MB chunk.

The date and time is stamped on the bottom of the video. You forgo GPS coordinates as the x350 needs an external add on for that. 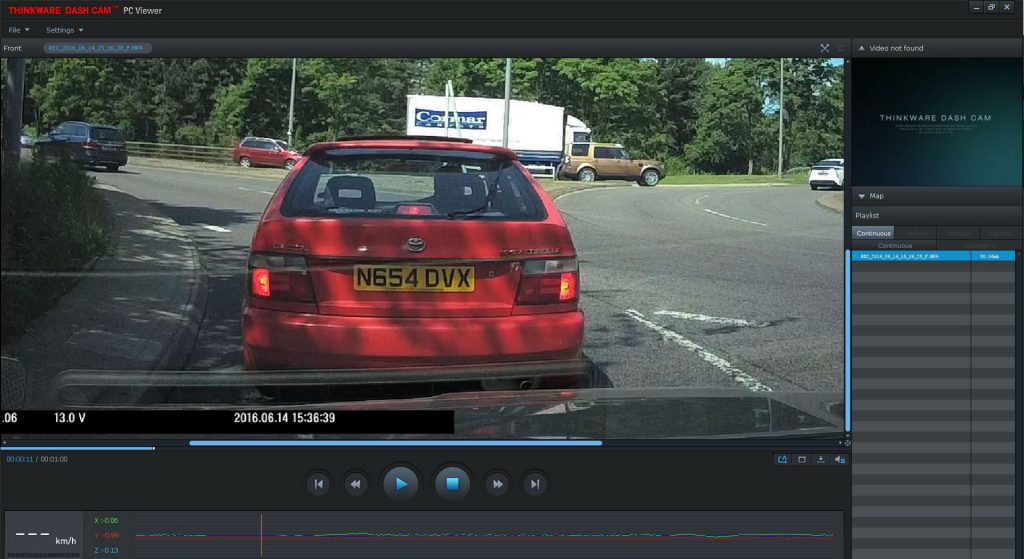 It will also record audio if you so desire.

There are a few other cool features of the x350 though. You can set it up in parking mode to monitor your car whilst you aren’t with it. The camera will switch itself off when it senses the voltage in your car battery is getting too low.

You can also switch on a security LED, this will constantly flash to warn wayward individuals.

When on the move the Thinkware can alert you of speed cameras, it also has lane departure warning. Again, it will beep at you when it thinks you’re travelling over the white lines.

It will also alert you when you’re too close to the vehicle in front. 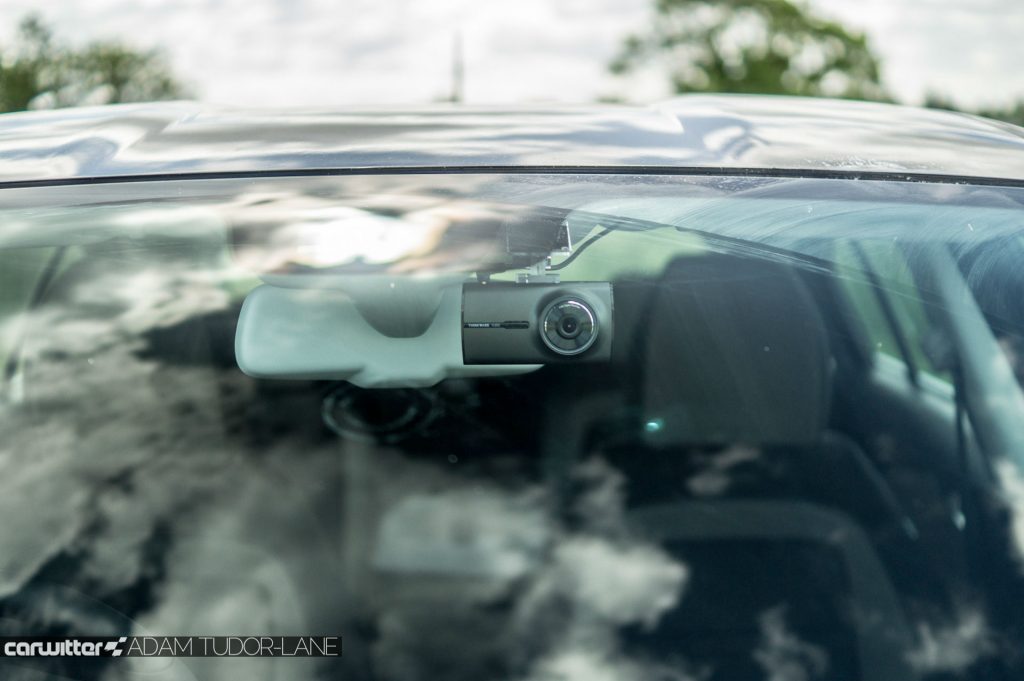 Whilst the x350 packs a lot of features, not all of them are as handy or useful as you would think. The lane departure warning was a bit temperamental, especially on country roads and having to fiddle with the sensitivity from the off was a pain.

WiFi is the main selling point of this model over the x330. Agreed, it makes accessing and using the cameras menus easier, but the extra cost really isn’t worth it. How hard is it to take a memory card out and put it into your computer?

Smartphone downloading is convenient, but then what are you going to do with it? If you want to use it in evidence it’s got to be emailed or sent somehow.

With file sizes of 40 and 80MB that’s going to be nigh on impossible to send on a smartphone. 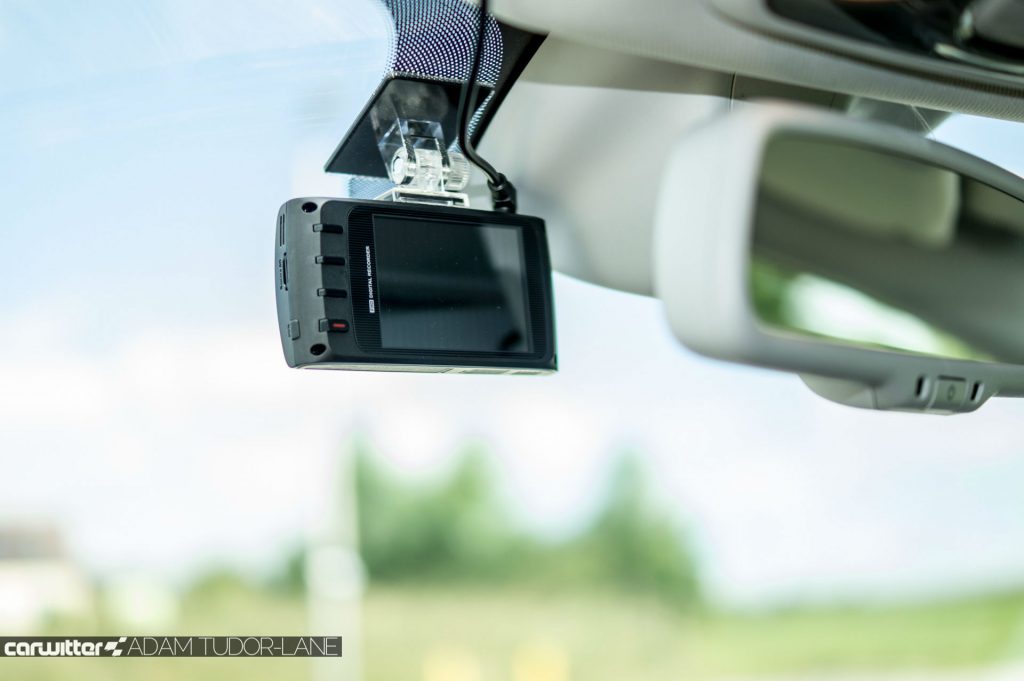 So save yourself some money and get the basic x330 for around £80.

You’ll still have to put up with the non suction cup fitting, fiddly power placement, turning down the sensitivity until you find the sweet spot…and having your 12v socket hogged. But if you can put up with all that it records some really nice, clear video. 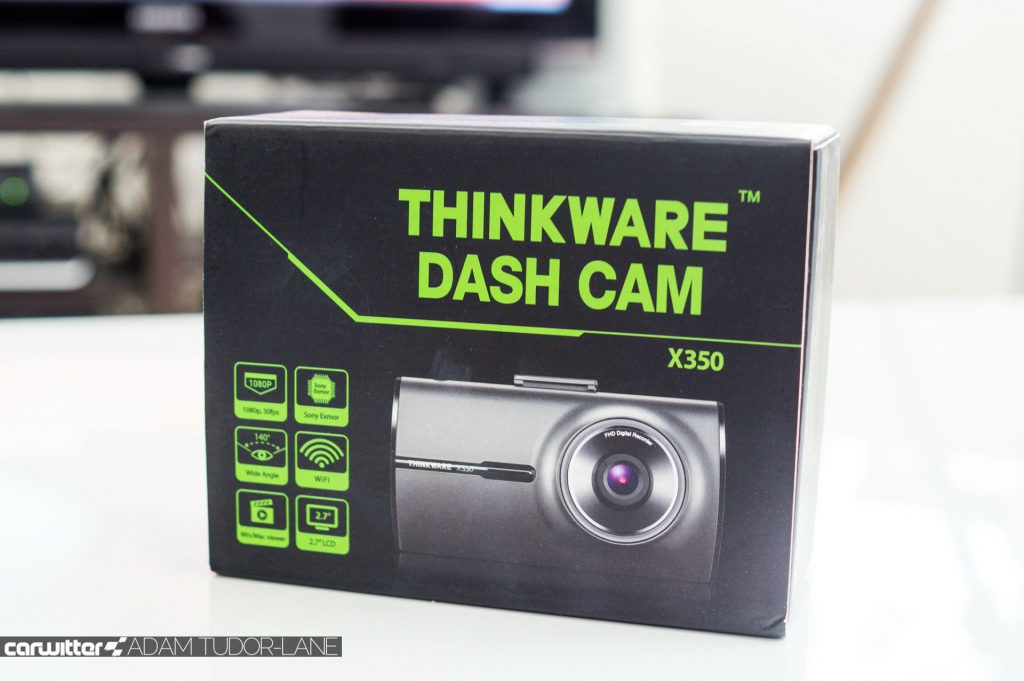 Why Fiat Is Still A Top Brand For First Time Drivers