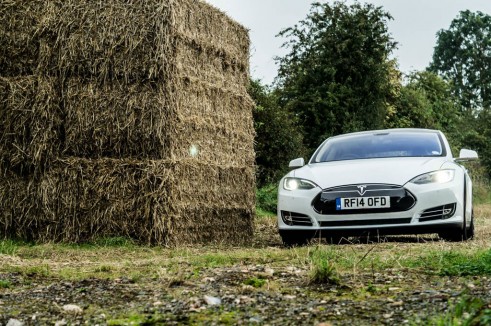 What did the grape say when the elephant stepped on him? Nothing, it just gave out a little whine.

You may now be asking yourself ‘why is he telling me an awful cracker joke?’ The answer is simple, tread on the Tesla Model S and that’s what you get.

Well no, that’s not true, you do get a whine, but it’s accompanied by the hefty saloon heaving itself at the scenery as if it’s engaged some kind of warp drive. 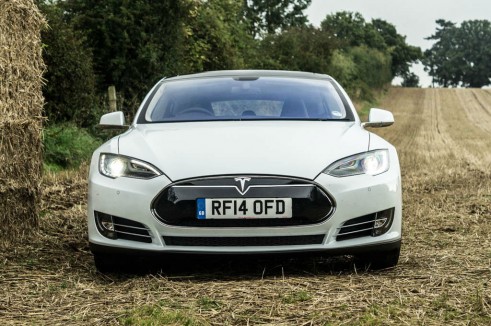 The model S is the first attempt by the American green giant (no sweetcorn here) at a saloon, and made its debut the other side of the pond two years ago.

This white number is the 85kw version, the most powerful, and will set you back over £96,000 (although there is the £5k government grant) when you’ve included all the kit loaded onto ours.

Outside the lines are spot on, Tesla have harnessed the extra design room created by dispensing with the internal combustion engine to create a long, but low, front end. 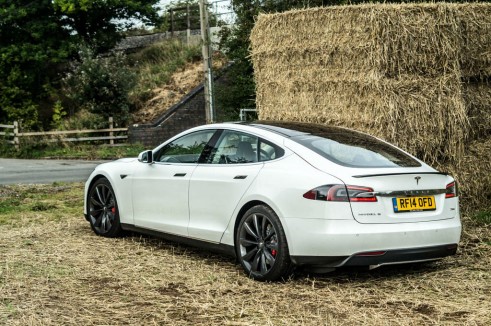 Behind it an arching roofline dips into a tiny hatched rear similar to a Mondeo. This is finished off on our version with a little carbon-fibre spoiler.

The headlights, filled with LEDs are sleek and the filled in grille, no need to suck in as much air, hosts the Tesla ‘T’.

Our tester rides on some huge, but rather fetching, dark grey, 21″ alloys, with beautiful bright red calipers peaking out from beneath the spokes. 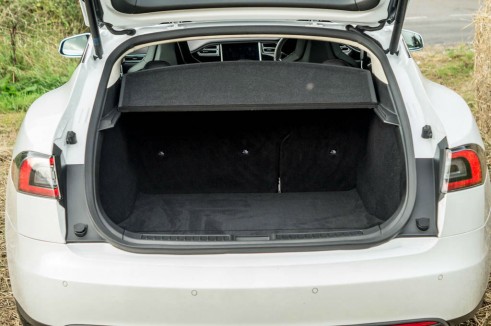 Under that hatch is a pretty impressive 774-litre boot, it’s so big that if you were to so wish you can put two extra, rear facing, seats in there and terrify following cars with your kids.

That big capacity stretches well over 800-litres when you push the button on the key, shaped like a Model S, silly, but we love it, and pop the bonnet to reveal more space (enough to fit a human, we tested it). 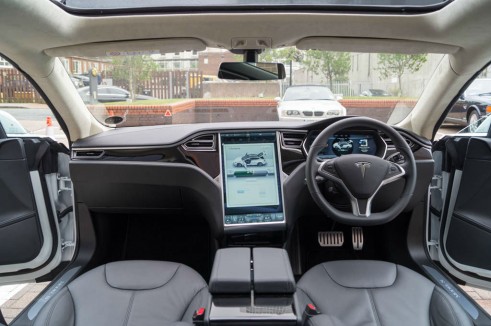 Slip inside and if you’re looking for a starter button you won’t find one. Just push the American-style gear stalk into D and the Model S is read to go.

It moves off silently, as you would expect, and maneuvering it away from Birmingham’s new Tesla supercharger we find the S has a pretty impressive turning circle for such a Goliath. 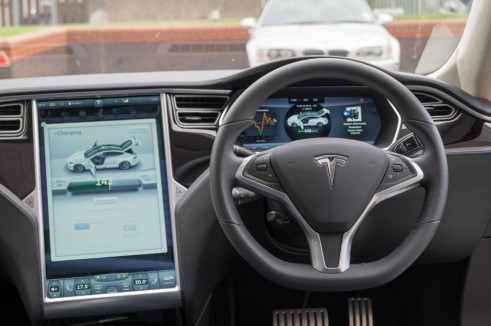 The steering can be set in three different modes depending on your preference, Comfort, Standard or Sport.

We stuck with sport for most of the drive, but in town the ease of Comfort is handy when you need to be nimble.

Even before you escape city start-stop driving the Tesla’s trick is obvious, a twitch of your big toe hints at what is to come, the S is just itching to go, ready to hit 60 in just 4.2 seconds.

Our version has the optional Performance Plus modifications, wider tyres, stiffer anti-roll bars, new dampers, but get the S out into the country lanes and it still feels big.

That’s not to say it is a bad drive, but the Tesla was made to be a cruiser, push it hard in a corner and a numbness comes out in the steering and while roll is reigned in very well the traction control has a very itchy finger.

But that can be forgiven, because treated right the S will give you something special, a hefty smash of acceleration that will put a smile on your face and take your breath away. 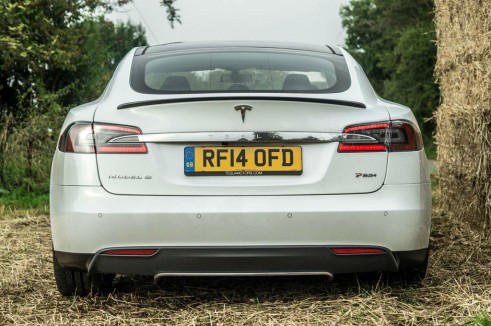 That’s all down to the rear axle mounted electric motors, instant torque, 430lb ft of it, with none of that waiting for petrol to explode.

Put your foot down and the S doesn’t thump you aggressively in the back, but it does call up everything it has immediately. You don’t accelerate, you’re catapulted like a human cannonball, flying forward ever faster until the limiter raises an angry eyebrow at 130 mph.

On a motorway it is constantly straining to go faster, take your eye off the ball and, with no audio clues to help, it creeps upwards into the 90’s.

A third of a mile to a junction with a couple of cars in front becomes a swift slalom, a challenge you immediately accept. Look up, and no matter how many cars there are you just know you’ll make it. 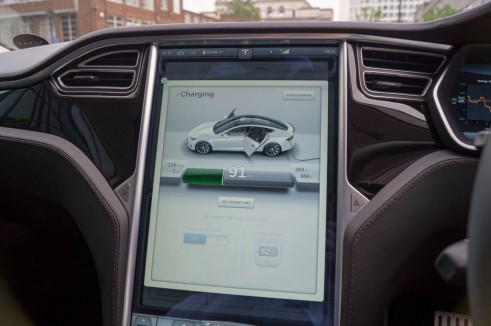 Range wise our tester told us when we charged it that it could hit around 320miles, on a cruise from London to Birmingham and back we probably averaged around 200-250 on a full battery.

Recharging it is easy, but not instant, if you want to juice it at home there is a special adapter you will need installed which charges the S in about 12 hours, or an ordinary three-pin plug in the mains will do it in 30. 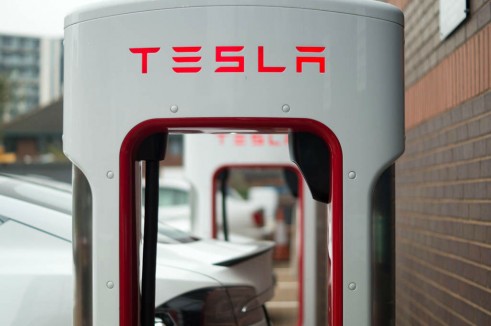 For us though the Tesla Supercharger station in Birmingham took around 45 minutes to leave the little green lights telling us it was full and ready. The free stations are very handy, although if Tesla becomes more popular, having just two in the second city could cause a fight. 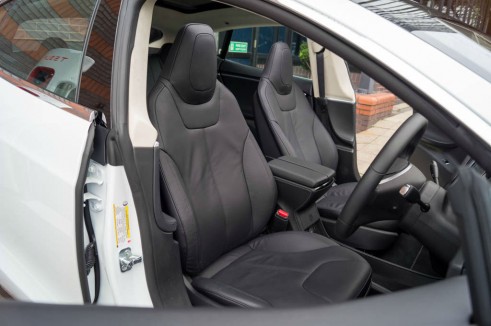 The interior is well designed, although not hugely practical, even the door handles are sculpted so nicely you’ll stare at them before getting out.

The giant, 17-inch, screen is a wonder, so intuitive you feel like your DNA was created with the ability to use it. Nothing is more than two buttons away, no fiddling with endless menus, just instant recall. 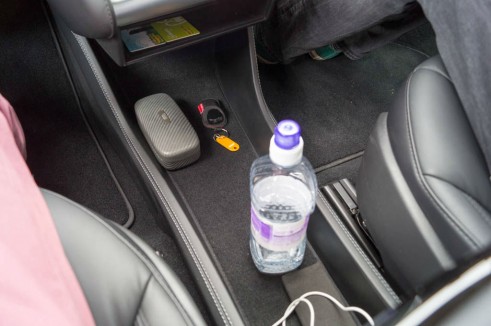 Sadly it is let down by a severe lack of interior storage. There are no door bins, there is no storage under the armrest other than a cupholder, and in between the seats there is just a vast space, put your phone down here and the S’s herculean acceleration is sending it flying. 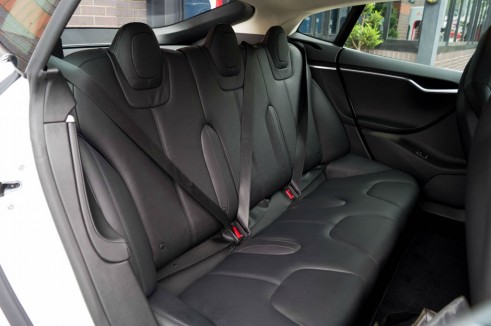 Also for such a vast outlay some of the cabin plastics are scratchy, and the switchgear on the wheel feels cheap and is far too easy to activate.

It’s annoying, and when we consider you’ve forked out just under £100k for this the refinement on long journeys isn’t good enough. There is no engine noise, but tyre roar is noticeable, that though could be explained by the giant low profile tyres we have on. 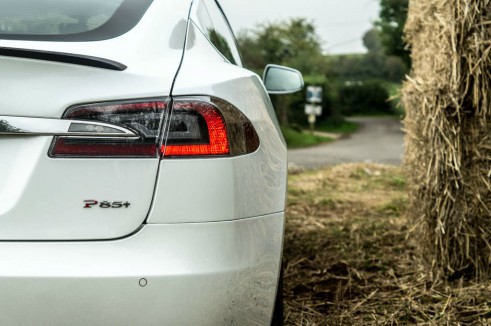 Every car has it’s foibles, but we’ve fallen in love the moment we saw it, and had to go for a lie down after pushing the accelerator.

Considering this is the first attempt by a manufacturer at an executive saloon, it is amazing how many brilliant things it brings to the party.

We want one, we want one badly, but next time, can we have somewhere for our phones? 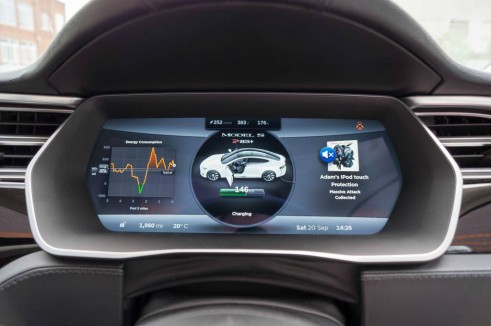 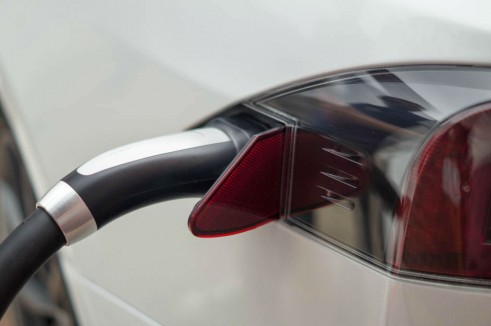 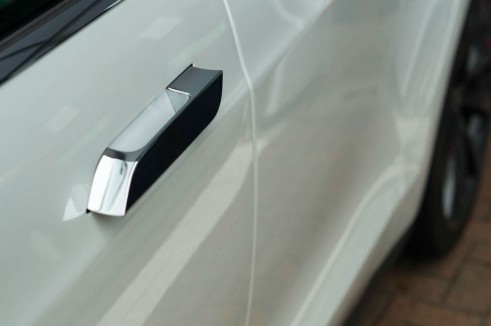 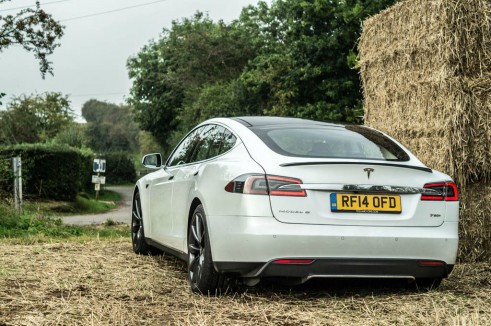 The Rise of the Hyper Hatch