Taking my CBT with Honda School Of Motorcycling

I’ve never had an interest in motorbikes, I like living. But earlier this year while on the Jaguar XF snow adventure I got chatting to another journo about bikes and the CBT, I said how I’d only ever be interested in something small, possibly a Supermoto or something like that.

He then mentioned the Honda MSX 125, after a quick Google I was sold. A white one with gold wheels looked incredibly awesome.

But I can’t ride a motorbike, I’ve only ever poodled around a car park at Silverstone on a Honda scooter a few years back, that was sketchy at best and didn’t feel at all safe.

A quick email to Honda later and my CBT was booked. Let’s see just how scary this is eh?

I’m not a fan of bikes at all, people that ride motorbikes end up dead. I don’t want to end up dead. With that attitude, I started counting down he weeks and looking into how safe I could potentially make myself when mixing my fragile, fleshy body with three tons of car just feet from me. 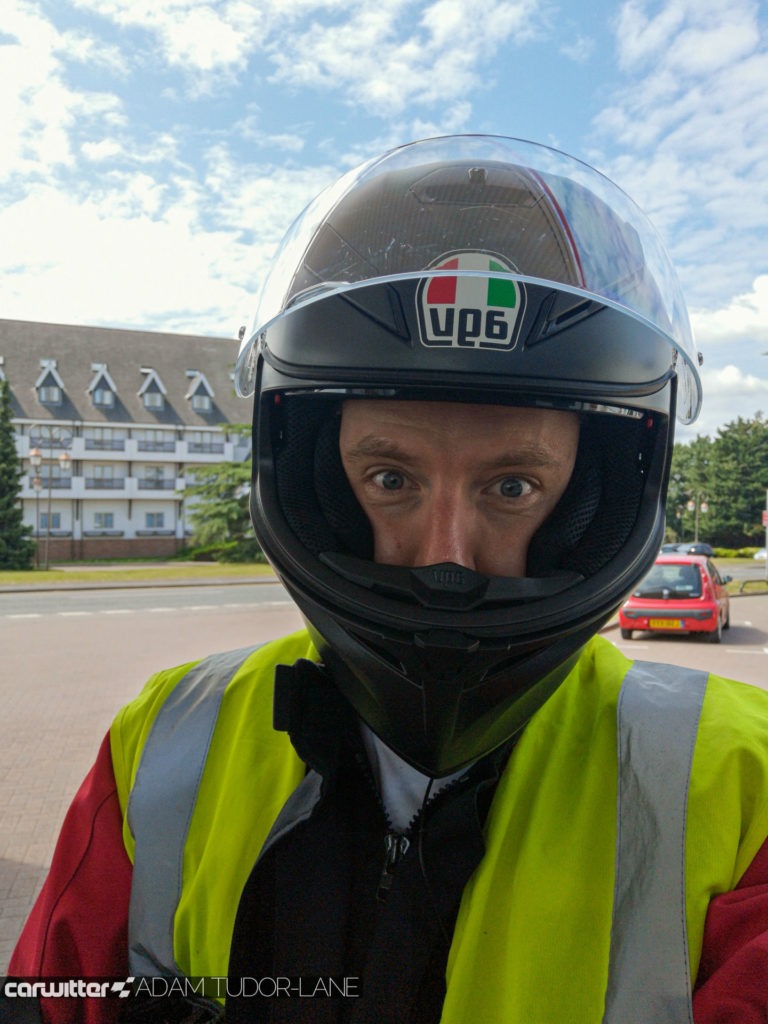 I learnt about SHARP, a set of tests very similar to EuroNCAP but for helmets. They examine how safe they are in numerous different tests, a SHARP rating of 5/5 is a top score.

I settled on an AGV K-3 SV in matte black, while it got 4 stars out of 5 it had all the elements I was looking for – different shell sizes (so my head doesn’t look too out of proportion to my body), a flip down sun visor, and decent styling. £170 later from Sportsbikeshop and shit was getting very real. 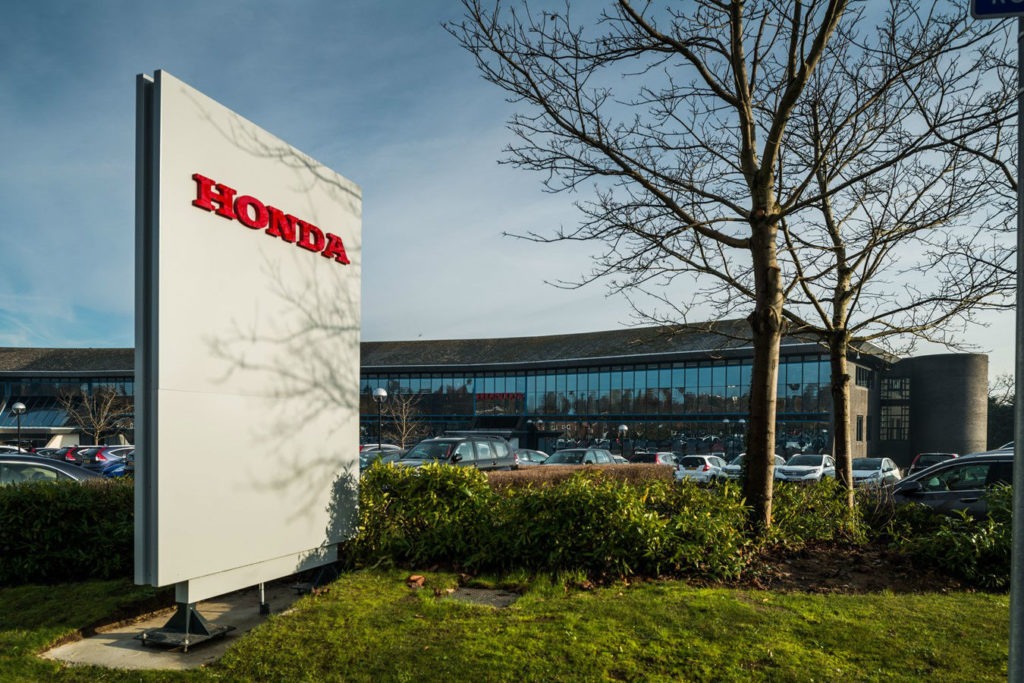 Turning up early on Sunday morning to the Honda HQ at Bracknell, my mind wandered to being out on the road by the end of the day. After just a few hours tuition we’d be mixing it with the morons that you’re normally pretty safe from. In a car if they hit you some bodywork gets damaged…not your body.

Positive thoughts and all that. 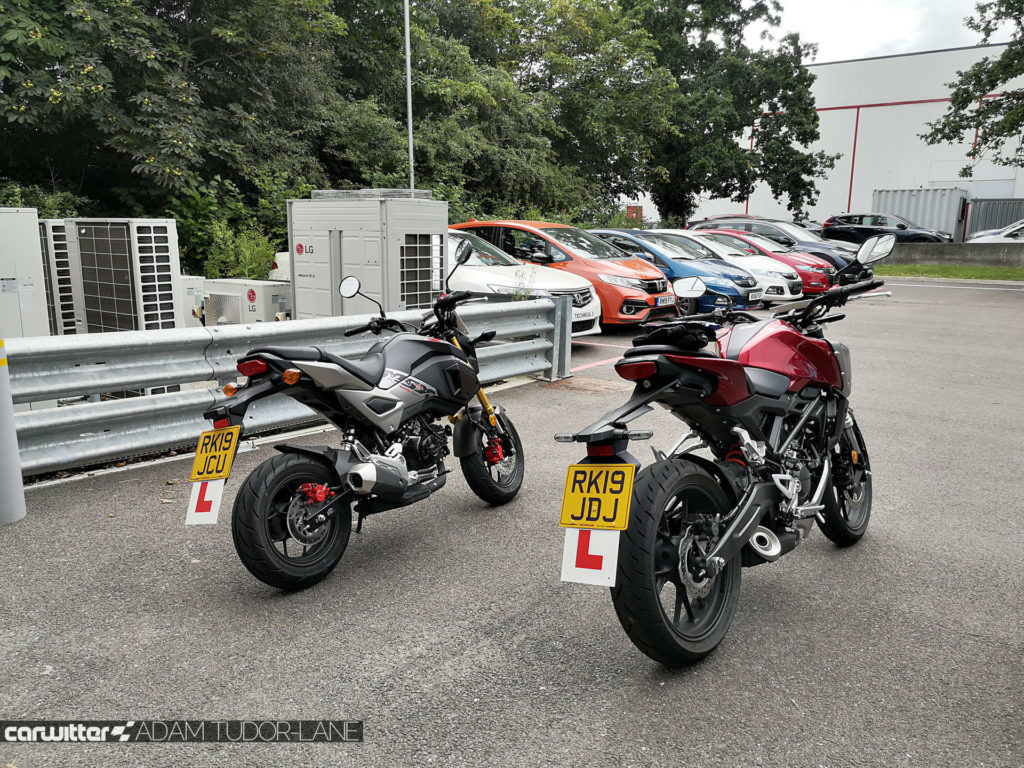 Thankfully I was with just one other person for my CBT. Sadly, it was a guy that already had a CBT and was renewing it. He’d ridden 15,000 miles in the last two years…I’d ridden around three on a scooter. Wonderful. I was going to be the lame duck of the day holding him back.

After sorting out the paperwork, we went through the basics of bike safety, what gear you should buy, rules of the road etc. Then it was out to the bikes. 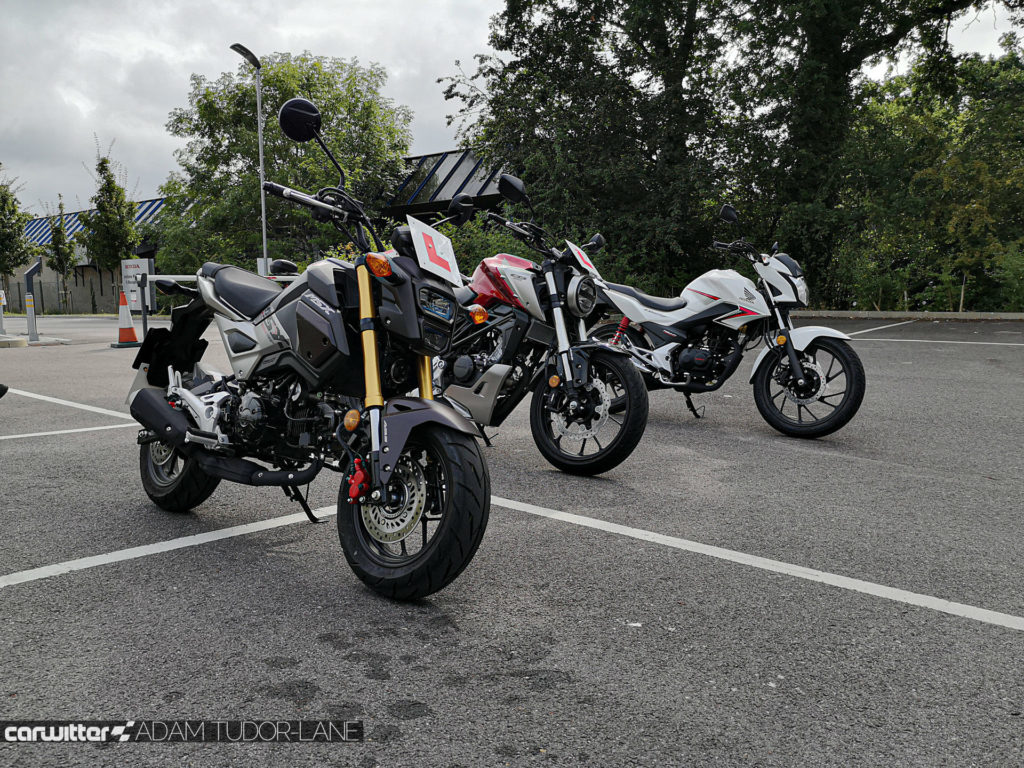 Now the MSX 125 is an odd thing, sized between Honda’s Monkey and a normal CB125R it’s a small machine, you can look quite odd on it depending on your size. But for me, it’s all I’m after. I want something for quick trips to and from meetings, or around town in Milton Keynes. I doubt I’m ever going to venture further than this, and most of the roads in MK are roughly 60/70 MPH, you can’t really go faster than that as there are roundabouts between.

Also, did I mention I don’t want to die? 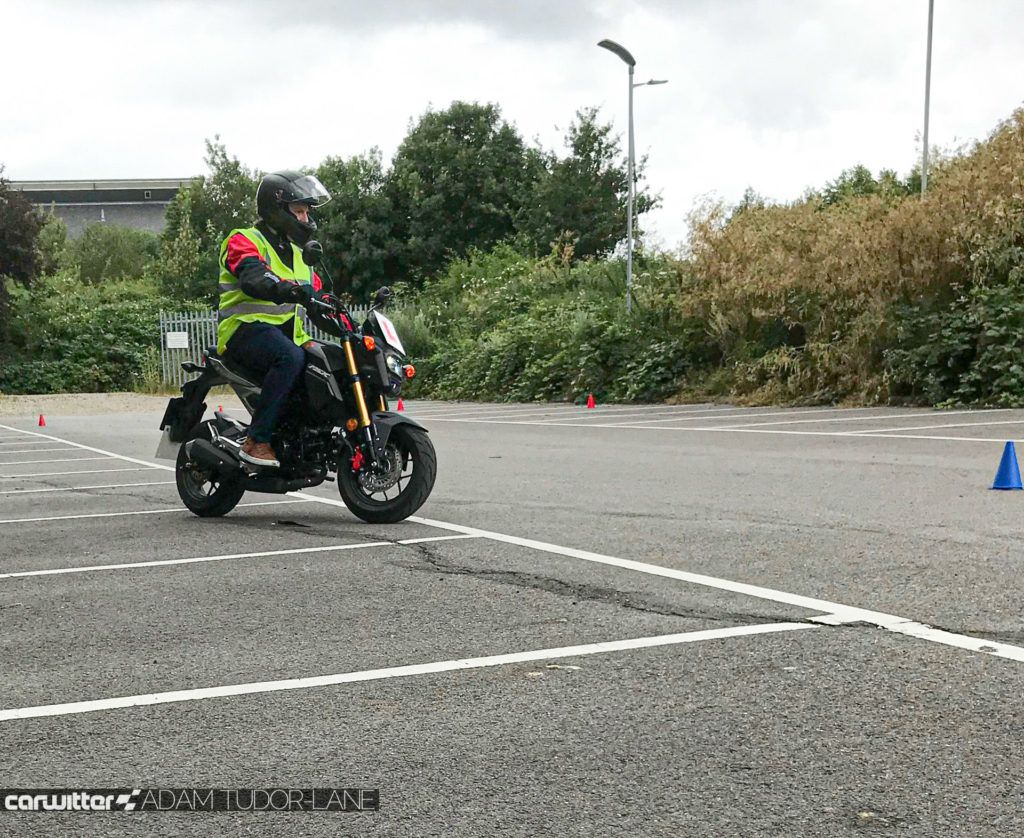 So, my day was spent on the little MSX 125, I took all three for a ride just to see what a ‘normal’ sized bike feels like – I’ll need to know this if I continue my motorcycling career and get my full licence. The R had a little more weight to it, your arms are out wider, but the mechanics feel exactly the same as the MSX, gears, clutch everything feels identical.

Then I rode the F for a little while, that felt cheap. It didn’t have the same throaty tone as the other two, it was almost how I imagine an old Super Cub to feel. The other two were suitably premium in their mechanicals by comparison. 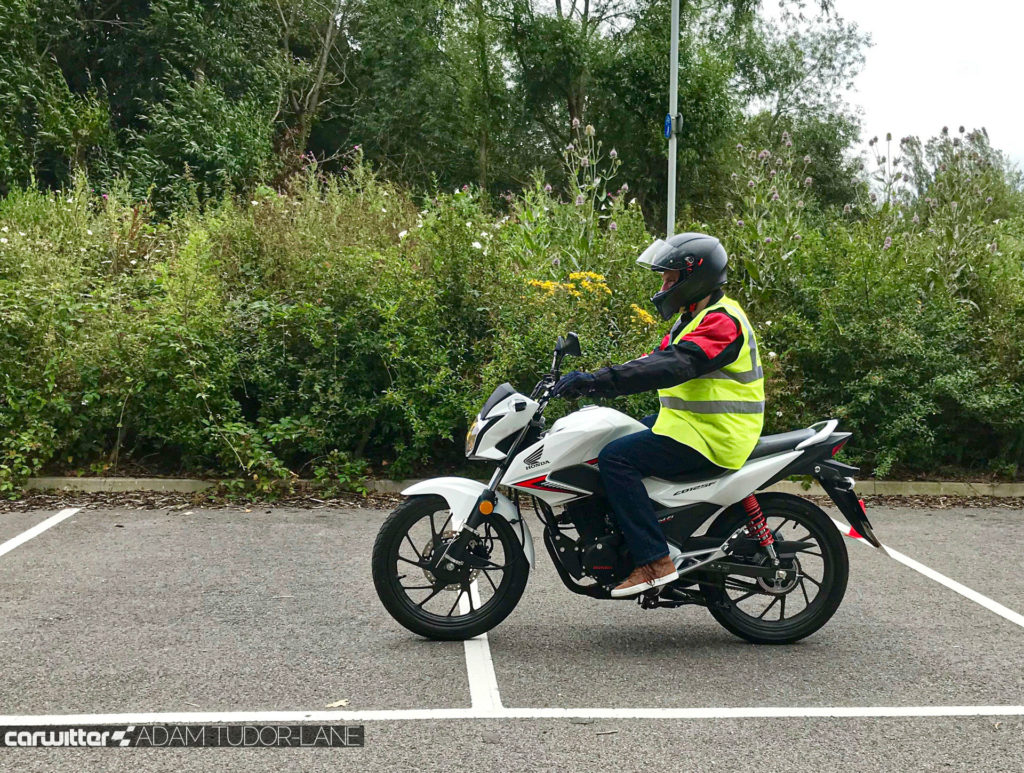 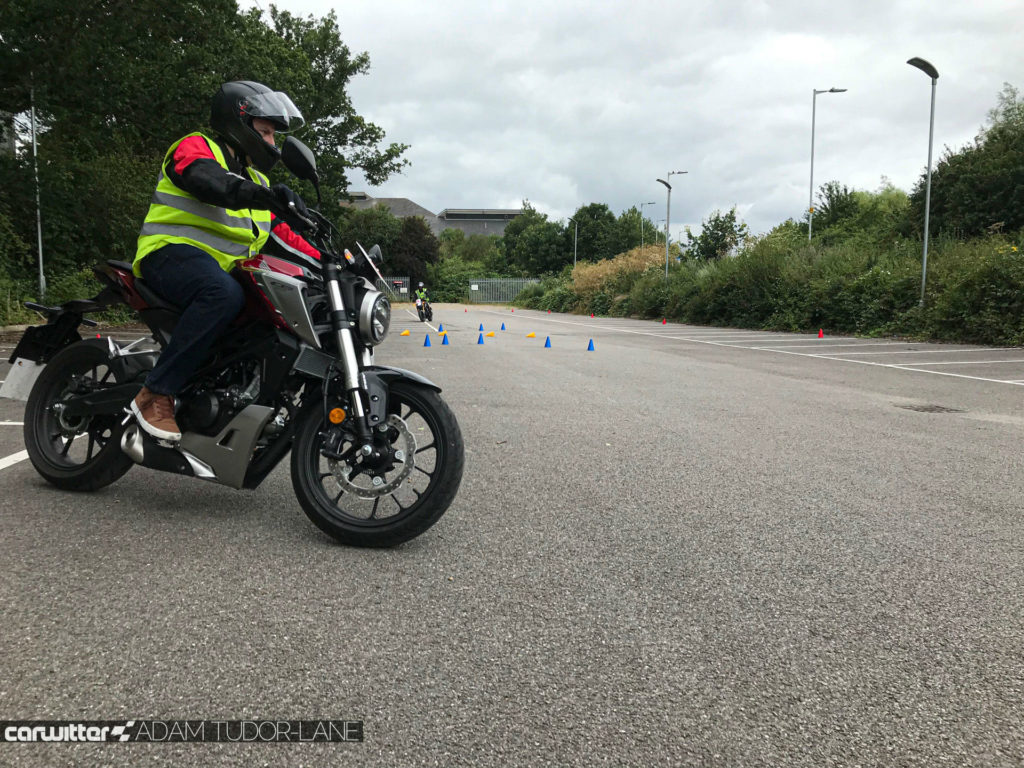 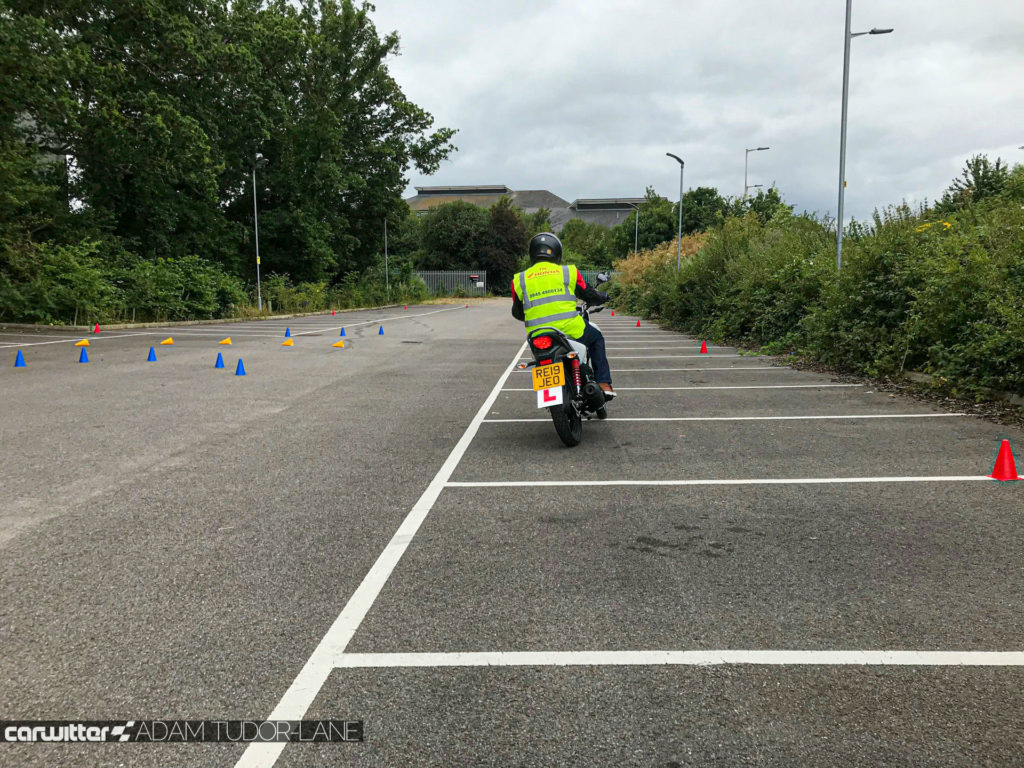 After fumbling with clutch control for five minutes or so I was off! I’d watched many, many YouTube videos of others taking their CBT and it looked hard. From struggling with balance at low speed, not being able to coordinate the clutch/gears/brakes to being totally rigid and plain awkward, some of these were my journo companions in the car world…but it really isn’t that hard at all.

My Father has always instilled finesse and delicacy when you’re piloting a machine. That advice has served me well from driving hundreds of cars in my line of work, to tanks and even light aircraft. Having dexterity and mechanical sympathy can get you a long way.

After I’d mastered the super sensitive clutch (and being told you can ride the clutch on a bike as it’s wet, not dry like in a car, therefore you can use it to adjust your power, which is key in turns) I was curving around cones within minutes.

It’s just like being on a pushbike just a bit more to think about in terms of the controls. 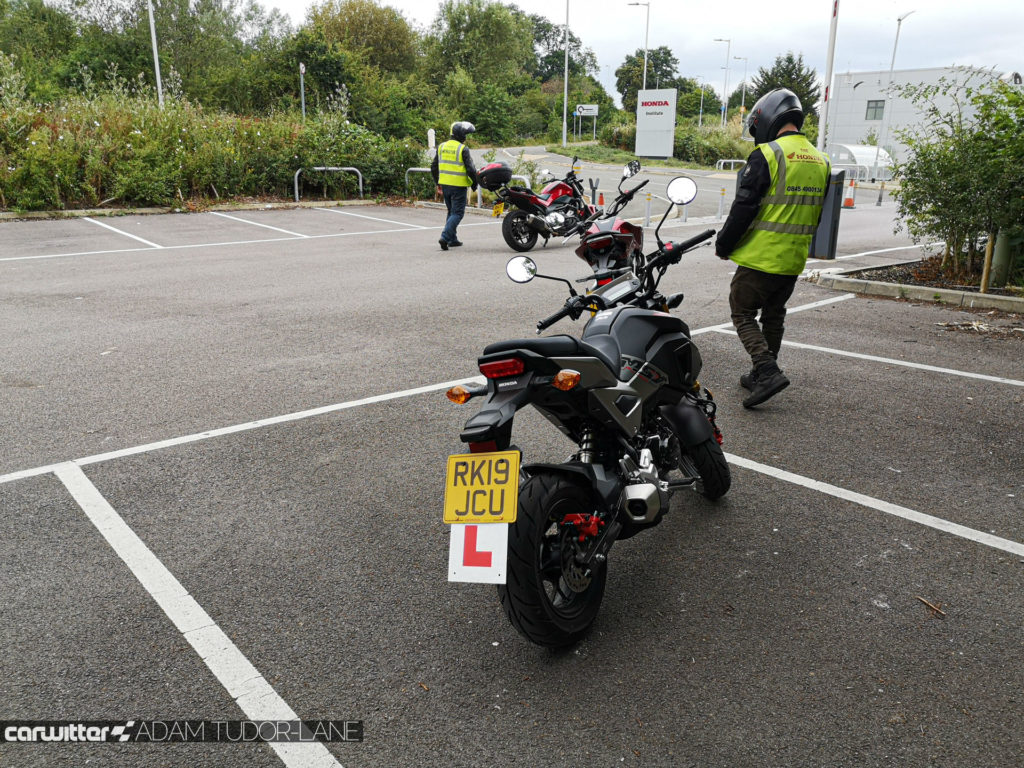 Getting our familiarisation out the way it was soon lunchtime, then our CBT two-hour road route. AKA the scary bit.

Thankfully, David our superb instructor with roughly 40 years biking experience behind him would be playing guardian angel, either in front or behind for the whole 50-mile ride. Bluetooth earpiece in and that angelic voice gave us both direction and warning if need be.

Putting everything into practice while dodging cars and negotiating direction took a few minutes of adjustment. Riding a motorbike is far more involving than driving a car, you need your full attention all the time. You can’t just let your mind wander, that’s a sure-fire way to forgetting a shoulder (lifesaver) check before switching lane…a potentially lethal mistake. 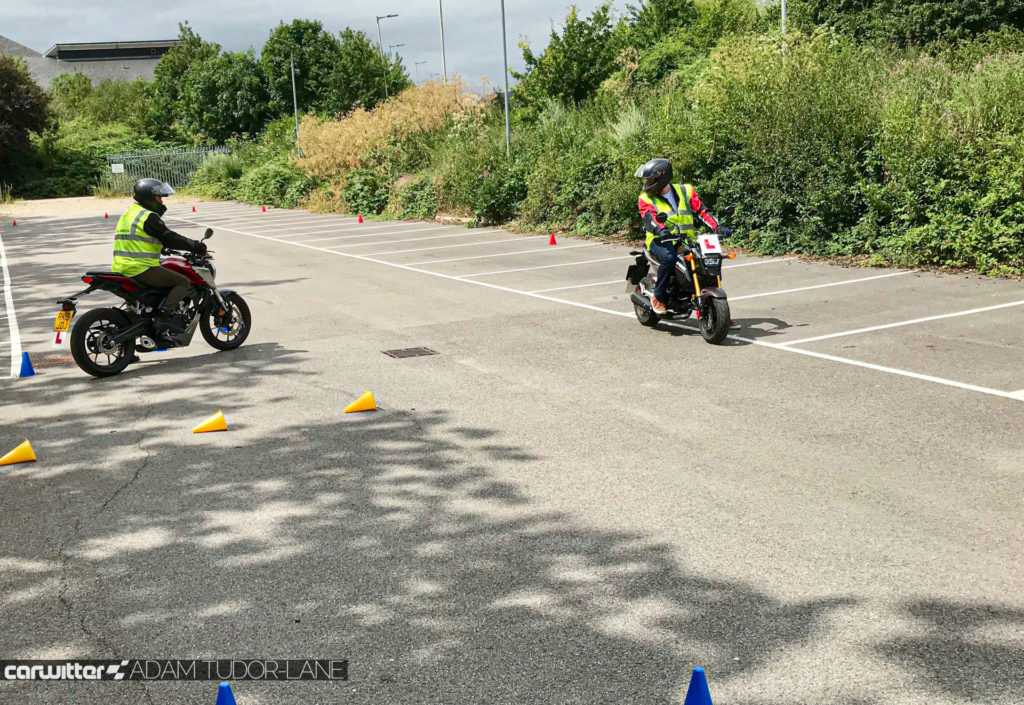 Getting up to speed wasn’t an issue on the little MSX, just use the full amount of revs before changing up, and it kept pace with the other cars just fine. Over the course of two hours, none of us were overtaken nor did I feel like we were impeding anyone’s progress.

There were a few hiccups on the way, you can get what’s called a ‘false neutral’ on a bike, this where you’re either in neutral and the little ‘N’ light won’t tell you, or first gear isn’t quite engaged. This happened to me twice, once at a junction, the other was in the middle of three lanes at traffic lights…not so fun.

At the first roundabout I got to when I was leading, the luddite on the left looked straight at me as we approached, then decided to pull out while I was on the roundabout. A few others pulled across in front of our paths in and out of turnings at junctions, it’s incredibly worrying that people either don’t see you, or don’t care and pull out anyway. But having driven for nearly 14 years and spending a lot of time piloting a van (where people also pull out on you all the time) I’d like to think I’m aware of just how dense most road users are. 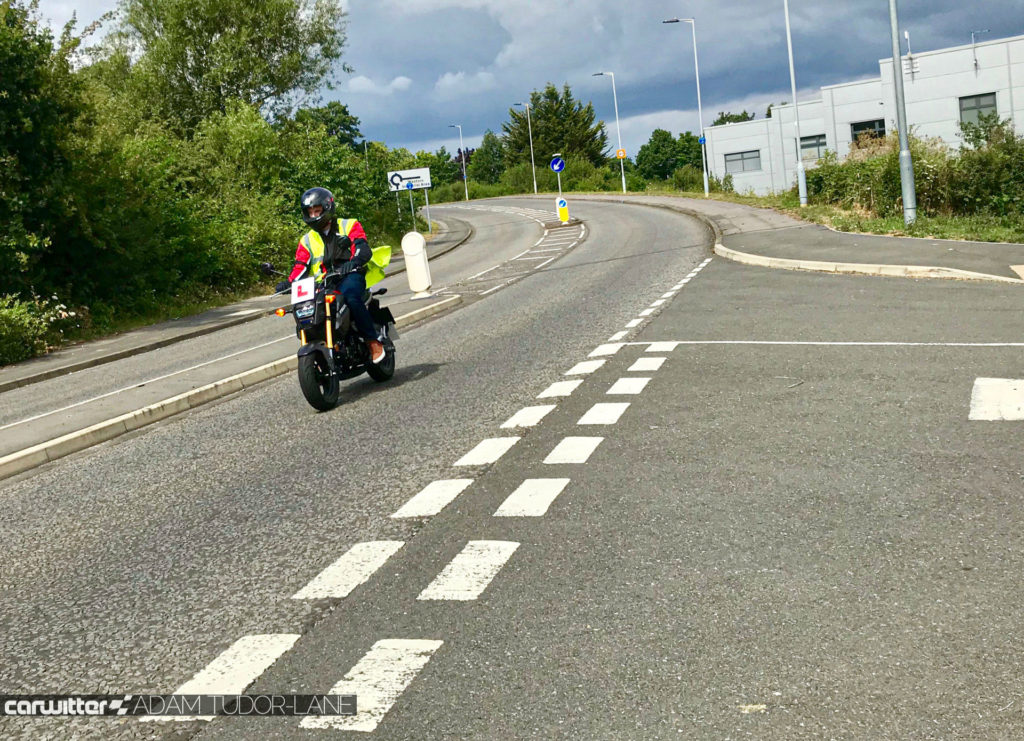 The two hours flew by, we got a chance to max out our little 125’s achieving the rather hair-raising speed of 63 MPH. It didn’t feel safe, but you quickly learn to accept the risks, and hopefully, you can minimise the danger to yourself.

We were soon back at Honda HQ, it was 3PM, we were meant to finish at 5PM. David said it was the quickest he’d ever taught the course with two people, so I couldn’t have been that bad.

CBT certificate signed, and we were done. 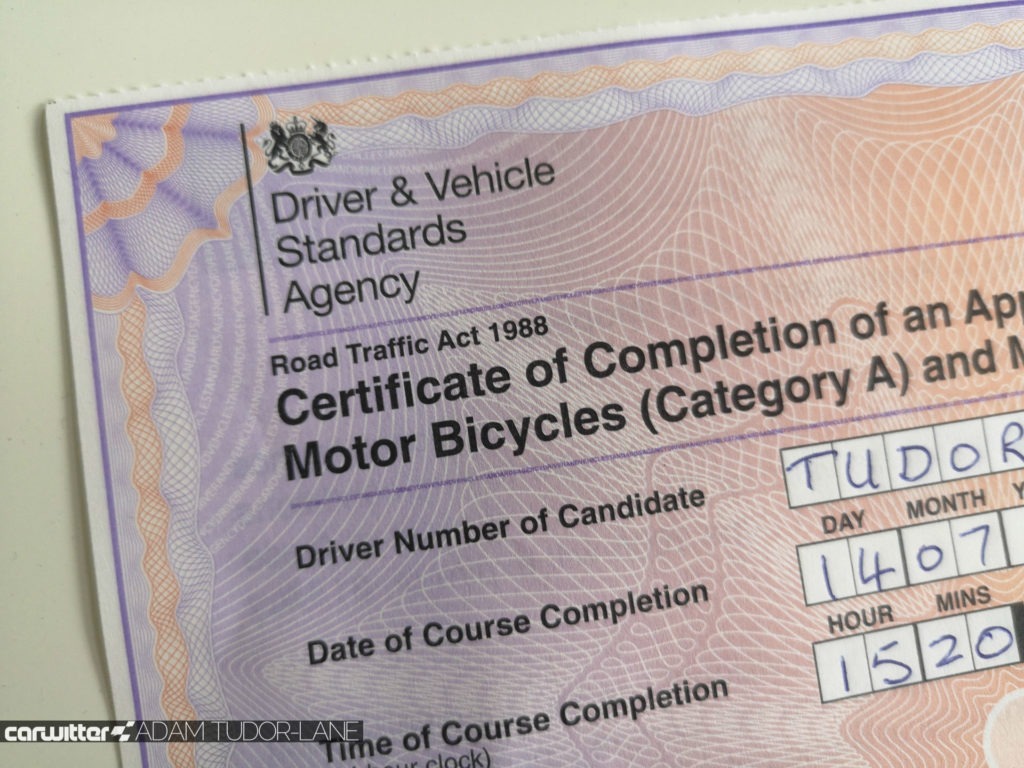 It’s quite scary and unnerving that with so little training you’re allowed out on the road, on a motorbike. There are so many extra checks and observations you have to constantly make to keep yourself safe that they need extended practice to become second nature, something you can’t get down in just two hours on the road. There should probably be a two-part, extended CBT where you return and do a full day riding with an instructor. This would give you far more grounding and repetition, but it is what it is.

Compulsory Basic Training was introduced to save lives in 1990, and it has, but it still feels all too brief to give you enough road sense to keep yourself safe. 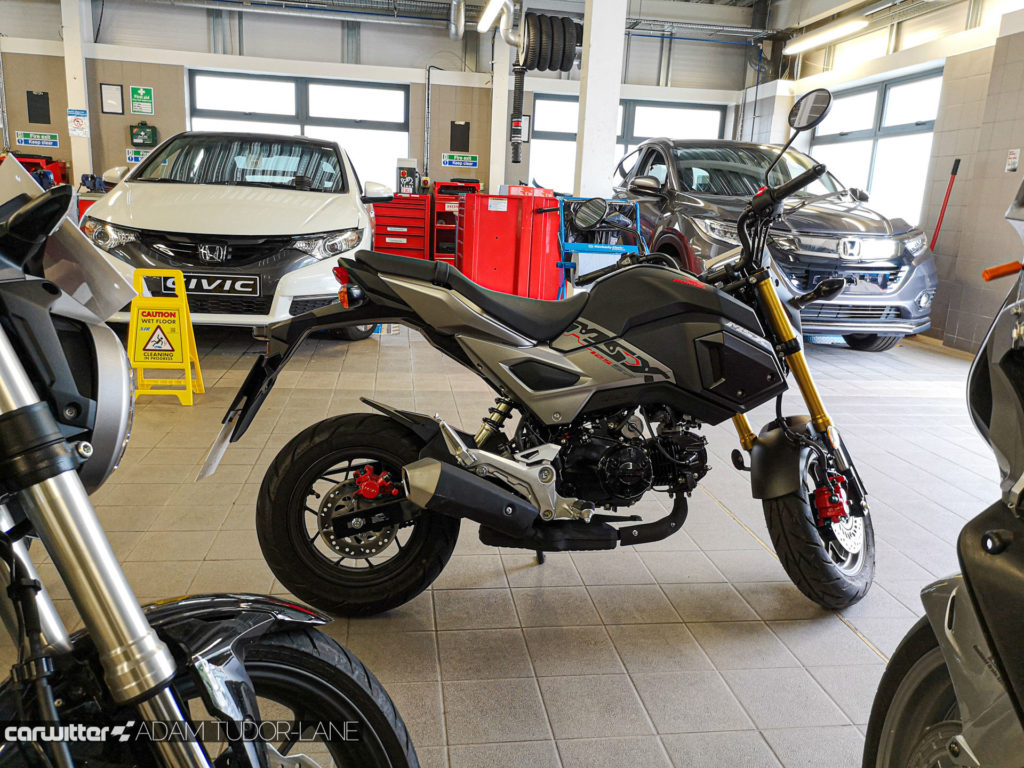 After seeing some of the larger bikes at the Honda head office, I definitely have zero interest in a bigger machine with more power. The MSX accelerates well enough, and it has that fun, lightweight nature to it that my hot hatches have.

I still don’t think bikes are ‘safe’, and with just clothing to protect you, it does leave you feeling incredibly vulnerable at times, but it’s all dependant on how you ride. Be defensive, give yourself room, plan super far ahead and you should be ok.

I’m keeping an eye out for an older MSX 125, one of those white and gold ones that I first fell in love with. I’ll also be purchasing some of the safest gear I can get my hands on; Draggin jeans with knee and hip armour and a Helite airbag jacket. Hopefully, I’ll never need either, but they may go some way to reassure me when dicing with those armoured metal machines we call cars.

I now have two years to take my full licence…maybe. 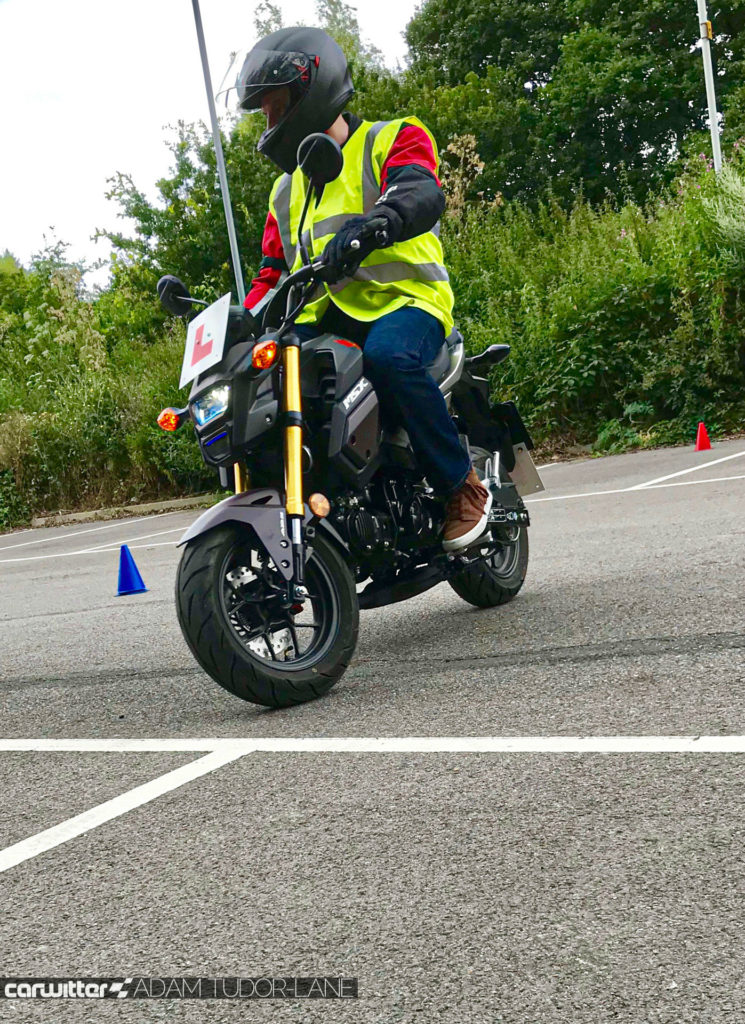 Preparations Needed By Auto Lending Companies And Consumers In 2019