Pick-ups are big business; they make incredible workhorses but also offer family practicality, effectively killing two birds with one stone. Few, however, offer a premium experience, there’s the Mercedes X-Class and then this, the Volkswagen Amarok.

Starting from £32,739 the V6 only Volkswagen Amarok can be specced in the utilitarian Trendline model, mid-range Highline or top Aventura trim. The latter end of that price point begins at £48,651 incl vat.

Our Highline model starts from £35,380, but with a handful of options, most notably the 19” alloys, Discover Media nav system and the stunning Ravenna Blue paint the price for this here Amarok topped £46k incl VAT. 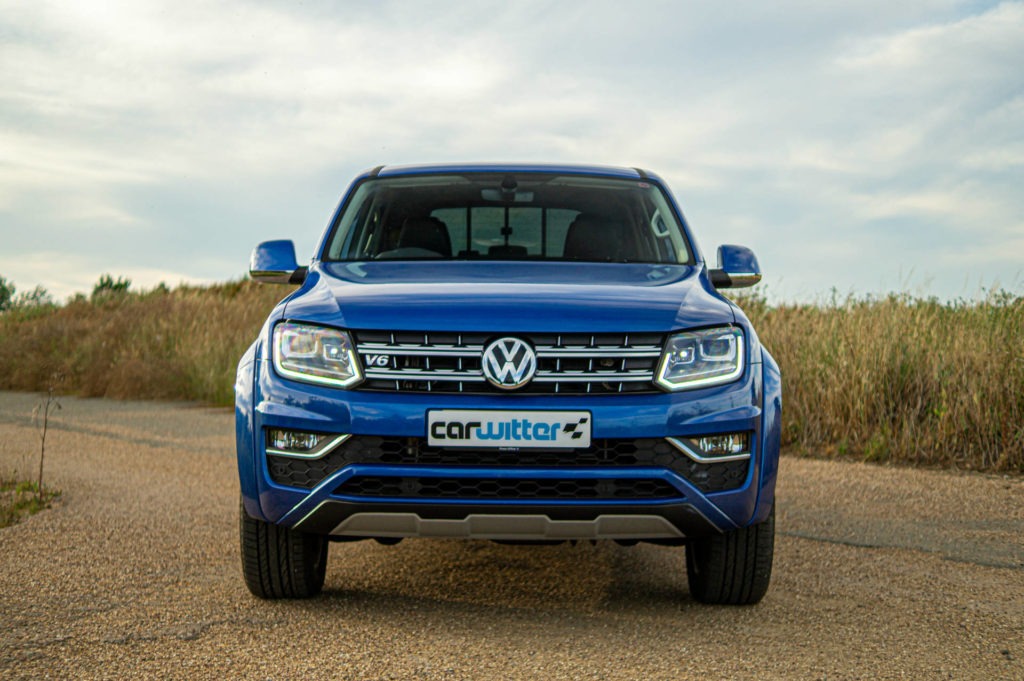 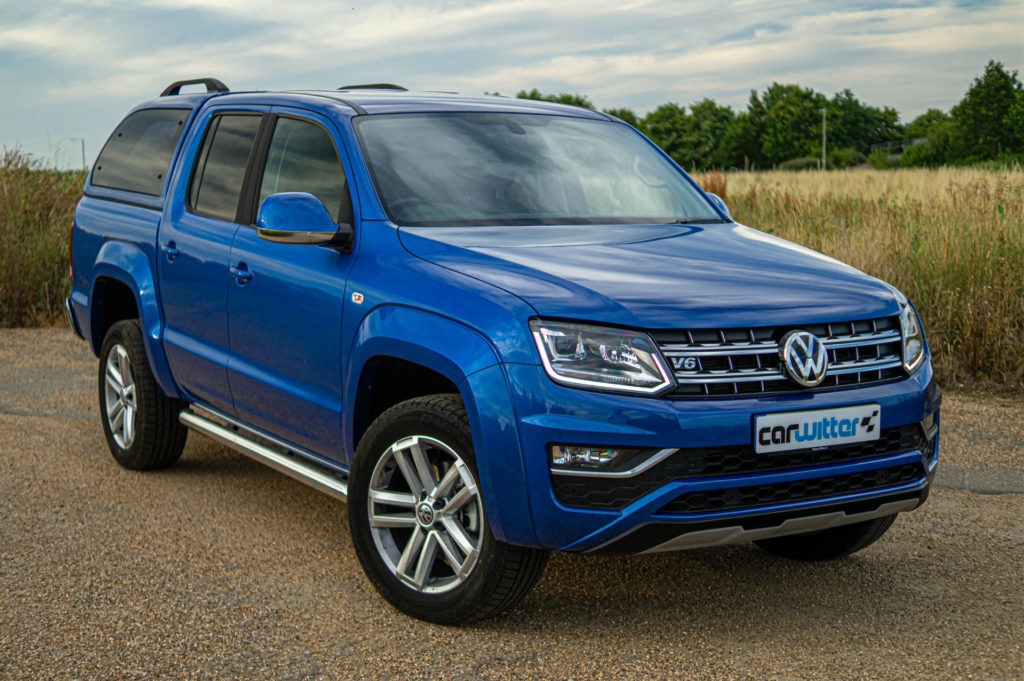 If you’re in the market for a pick-up you want something big and beefy, road presence is key. The Amarok has this by the bucket load. Comparing it to the likes of an Isuzu D-Max and you can see just how large the Volkswagen Amarok is, the peak of the bonnet sits at shoulder height, for this sort of loftiness in the Isuzu you’d have to look toward an Arctic Truck.

Front on, square is definitely the name of the game, it gives a geometric yet modern appearance that again, no other pick-up currently has. Even the most basic Trendline model with its dinky 17” wheels looks just as smart in profile as it’s top-spec £48k brethren. 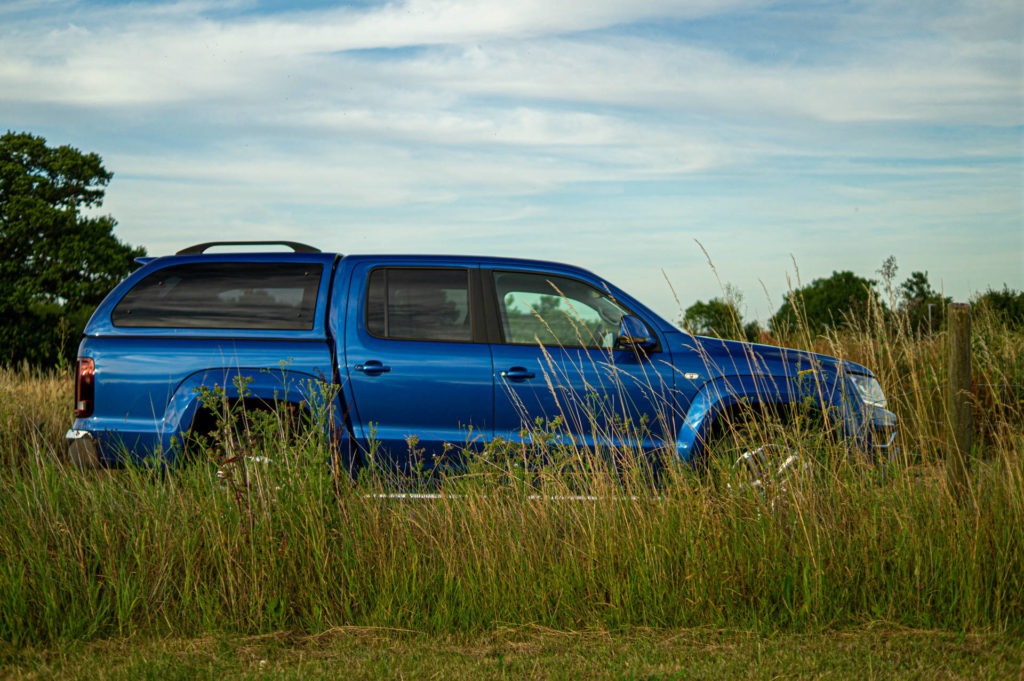 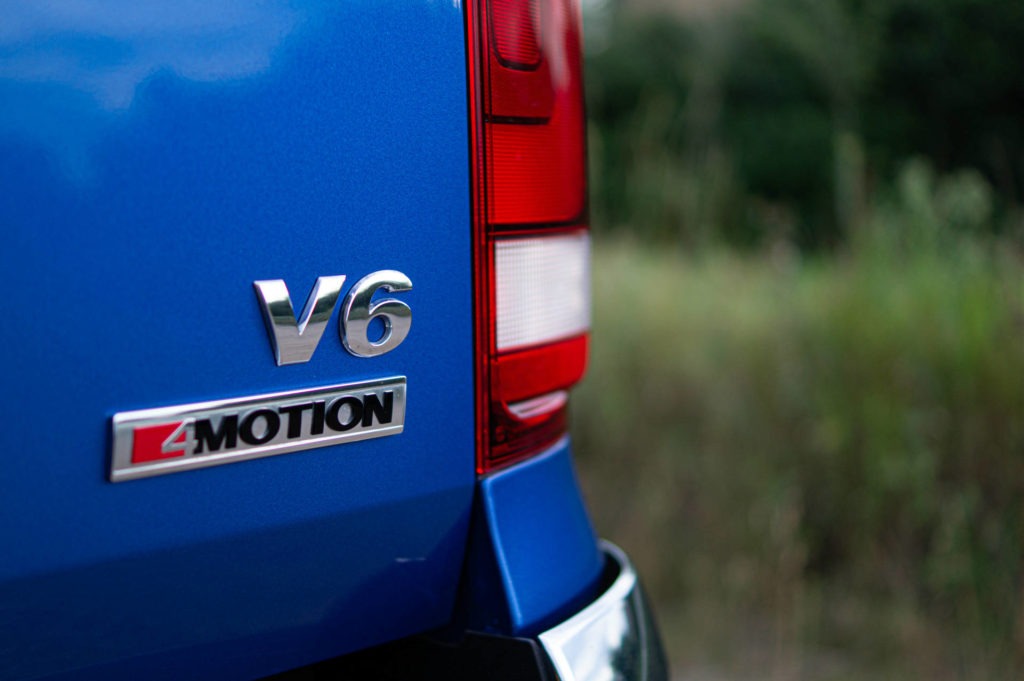 Powered by a mighty 3.0-litre diesel V6, power outputs range from 201 bhp to 254 bhp, Trendline gives you the option of a manual or auto while the upper two trims are 8-speed auto only. Our Highline model had the more powerful 254 bhp, this overboosts to 268 horse when needed.

Power is never an issue, overtakes can be made with ease noting the whistle of the turbo firing up to drag you onward. A huge 580 Nm of torque enables a 0-62 time of 7.4 seconds, that’s ridiculously quick and feels so in a thing of this size. Sadly, it still can’t tow 3.5 tonnes, which some lower-powered rivals can.

As with any pick-up you can expect a few wobbles from the rear end unless you’re lugging a decent load. This only happens across expansion gaps or sections of broken tarmac; on the whole, the Amarok stays settled with little body roll compared to its competitors. Braking is also well damped, you don’t get the pitching and diving as you do in the likes of the far cheaper D-Max. 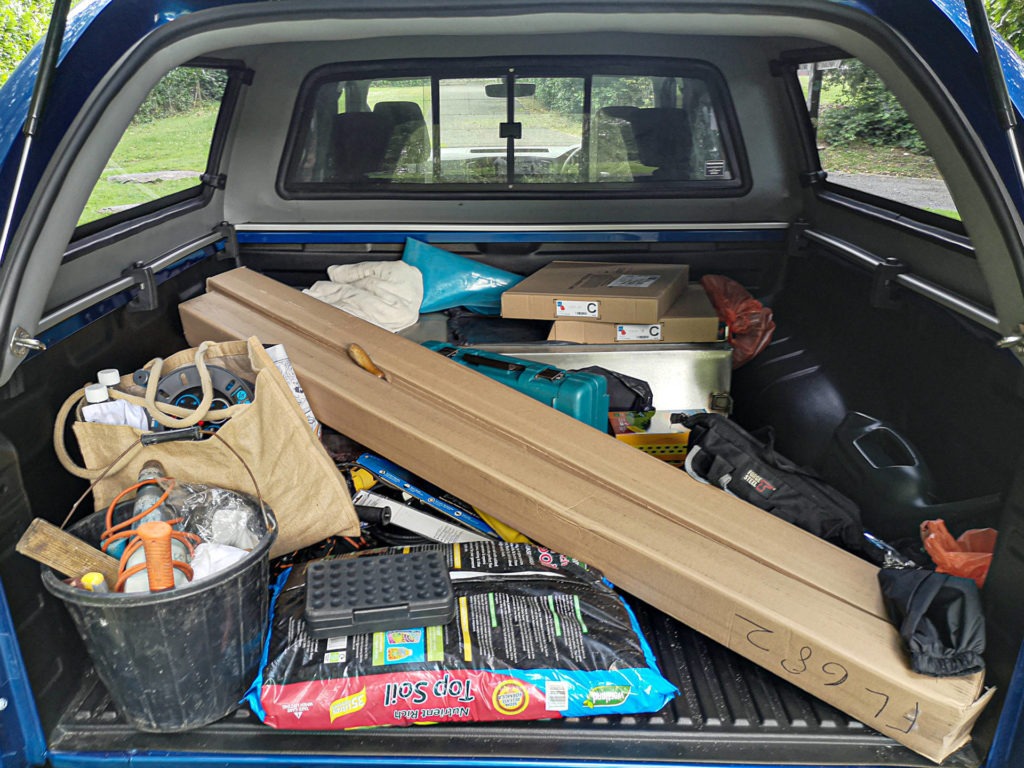 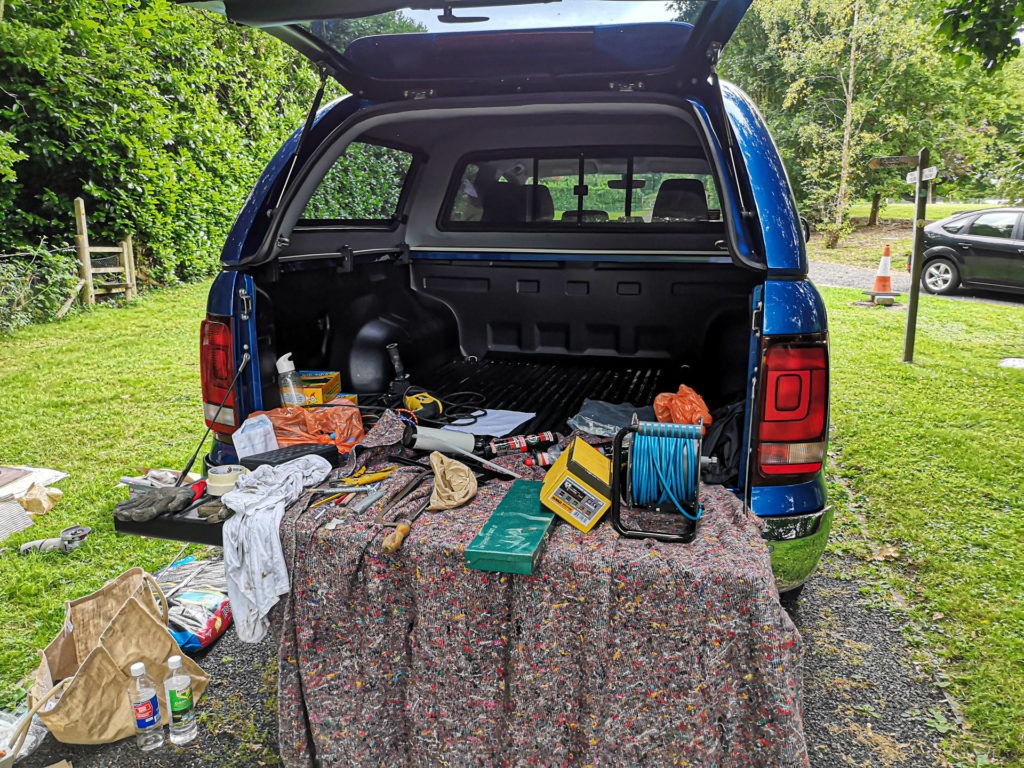 I had some building work to do in West Sussex, a good two…sometimes three hours from home.

Loading up was a doddle, the huge space on offer out back swallows tools, soil, box sections of stainless steel, plastic sheeting, dust covers and your lunch with room to spare. In fact, the load space is class-leading, you can fit a Euro size pallet between the wheel arches, there’s a full 1,222 mm width ways.

High sides mean you can load the back with up to 1.28 m3 over a surface area of 2.52 m2. You can even opt for a tailgate with a 200 kg loading ability further extending that surface area.

The drive down was comfortable, we didn’t have enough load to quash those leaf spring wobbles completely, but the power on offer despatched overtakes down country lanes with ease, the silky smooth 8-speed gearbox switching cogs at lightning speed. Only on the return journey did it drop the ball just the once and a jerky upshift was felt on pulling away.

Our Highline was fitted with a Truckman top which automatically secured the rear tailgate glass upon locking, giving added security and meaning we could load up the night before; not having to worry about things going walkabout overnight. 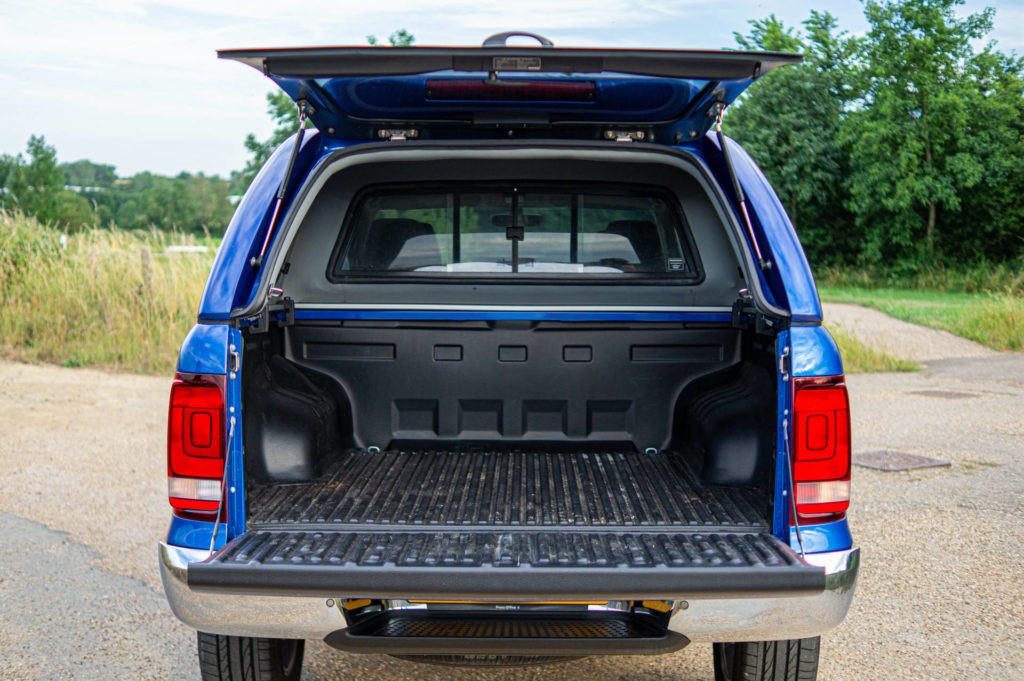 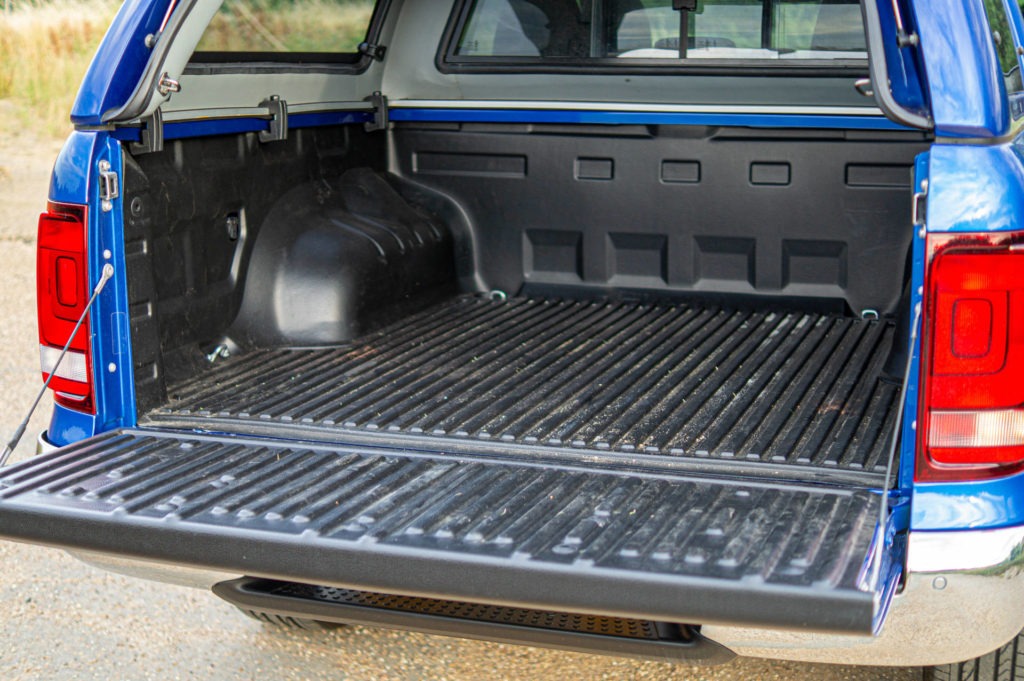 Inside you find leather and a well laid out centre console, par for the course as it’s a VW. The plastics are hard-wearing, most would call them scratchy, but they aren’t cheap in any way, they just feel as though they could take a beating and still look half decent.

There’s plenty of space, you feel so far removed from your co-pilot they may as well be in another car, it’s where you get a sense of just how wide the Volkswagen Amarok is.

Those seats aren’t particularly supportive or hugging, you sit on them rather than in them, but they’re comfortable enough over the 200 odd miles we had to cover that day – they have been awarded an AGR seal of approval for outstanding ergonomics. 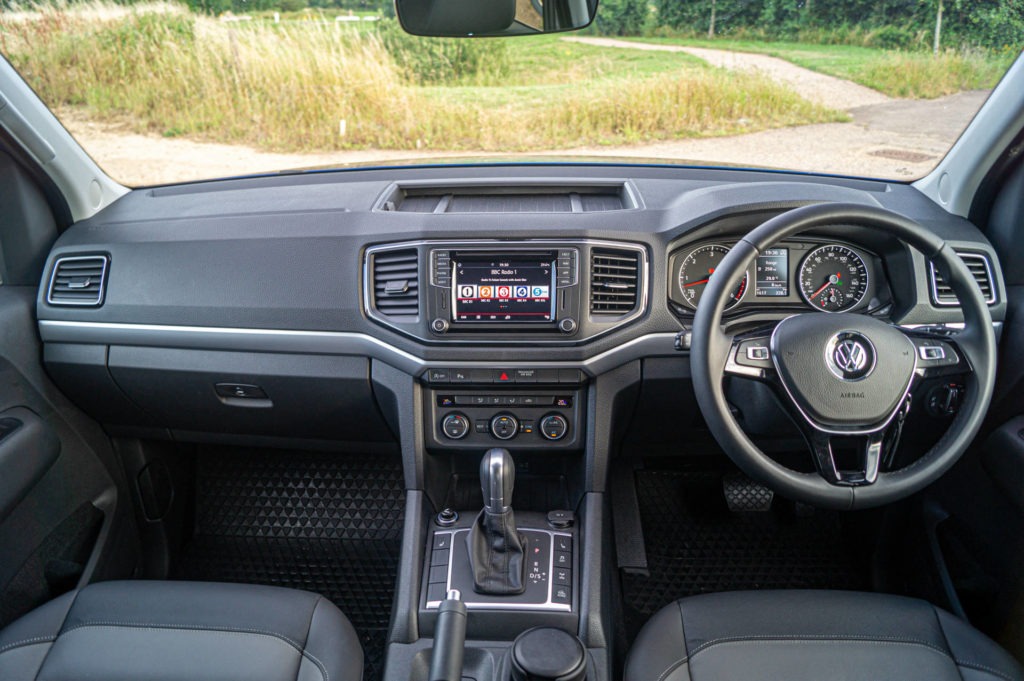 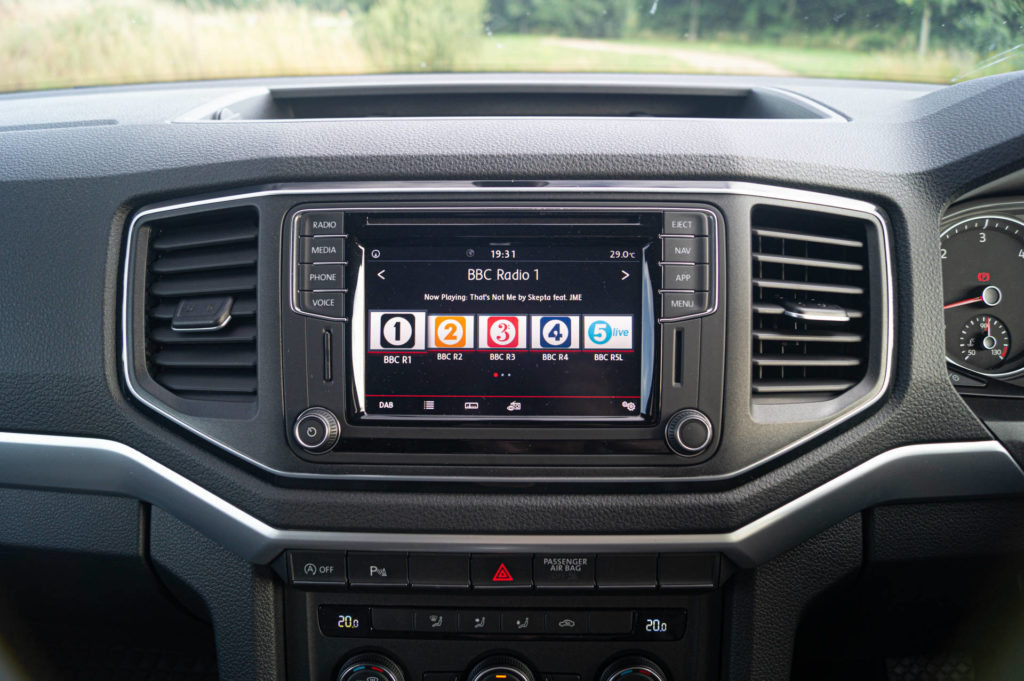 Apple CarPlay and Android Auto, as well as MirrorLink, come as standard on the slightly small 6.33-inch infotainment system, no doubt this will be updated to something larger when the next model is released.

Parking sensors all around and a rear-view camera are essential in a vehicle this size. Even though it’s easy to spot the corners, and blind spots are minimal you can still lose bollards, kerbs and small children beneath your view points at the sides while manoeuvring. 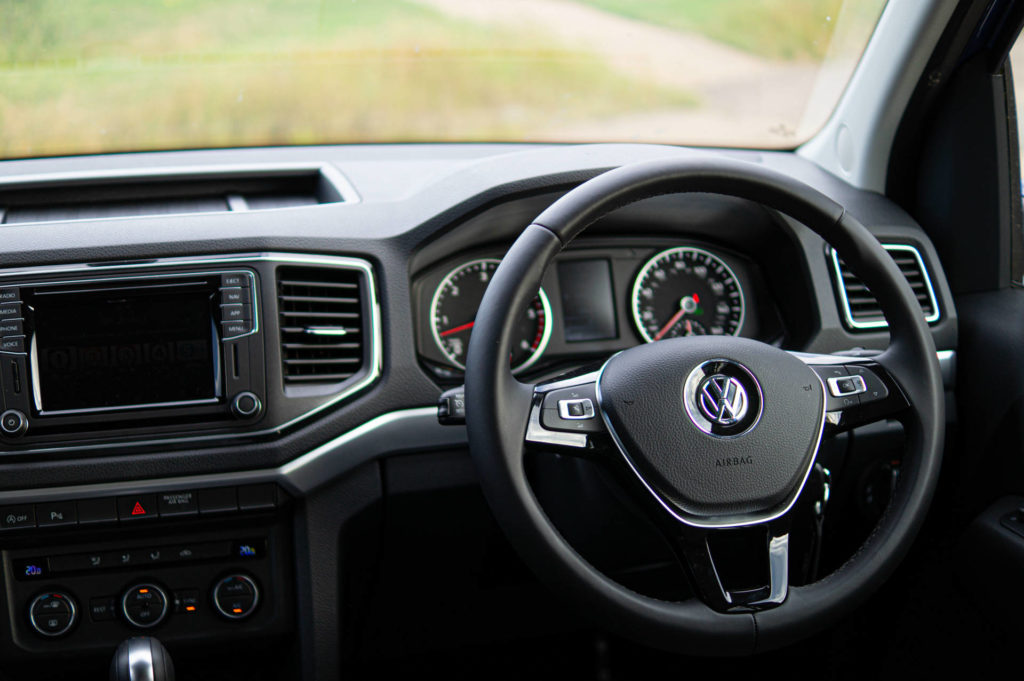 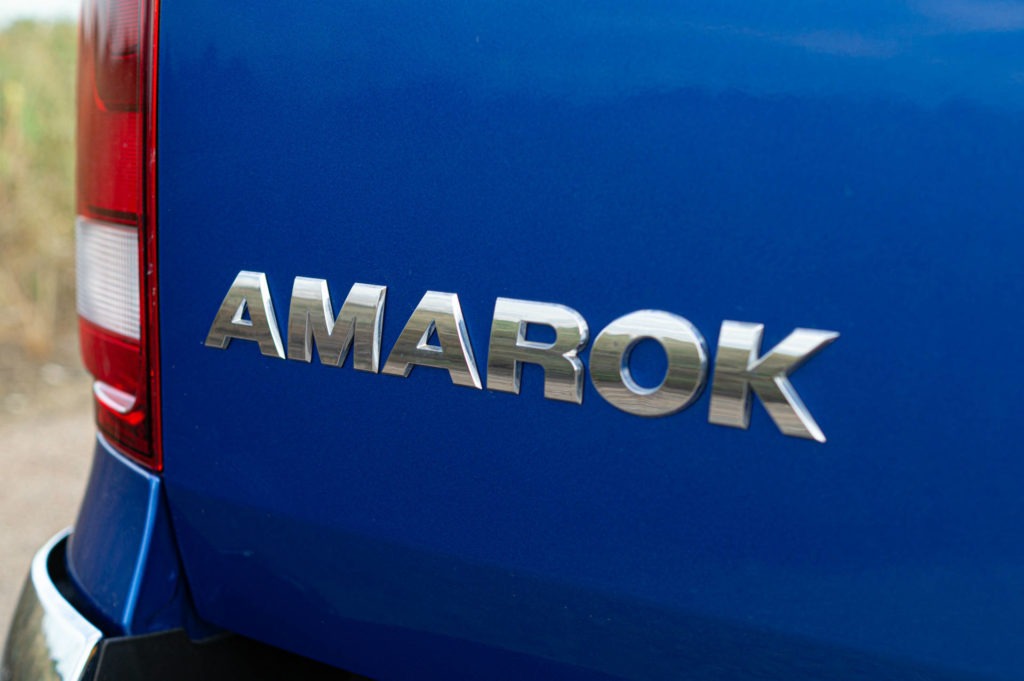 Using the Amarok as we did meant trips to various tool shops, Screwfix, Toolstation, Howdens, a local blacksmith, parking was a breeze wherever we went, the sensors really are key to getting in and our of parking spots easily. The Amarok is a big old thing, a quarter of it will stick out of a typical car space, so you’ll have to mind where you leave it.

Heading the 100 or so miles down to the work site and traffic was heavy on a Monday morning, so we used Google Maps to pick a route across country for us, Android Auto firing up quickly and being easily readable on the infotainment screen…although something a bit larger would be nice, but I’m sure it will come in time.

There are plenty of power sockets throughout the cab, one right on top of the dash which is handy for sat navs, our model also had a cigarette lighter…how quaint. The small buttons on the steering wheel can be a bit fiddly to use at first, they also look a little dated by comparison to more modern VW offerings.

Rear seat legroom is good, a family day out was had the weekend before I pretended to be a builder. The rear bench is a little, well bench like, but there’s more than enough space for two adults to sit in relative comfort. VW only offer a double cab Amarok, whereas competitors can offer various different configurations. 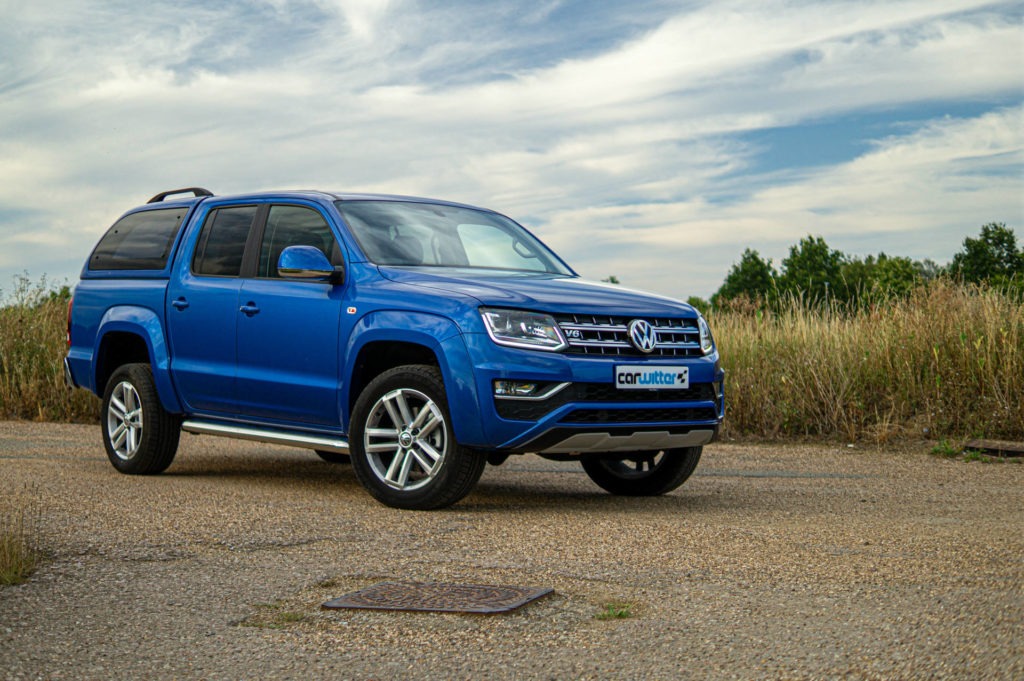 With healthy benefit in kind rates and deductible VAT, you can see why the Amarok offers a far more interesting proposition for a tradesman compared to a van.

While I wouldn’t advocate it as an everyday family wagon (SUV’s or crossovers are far more car-like and nicer to drive), for a workman, who needs to occasionally use their business vehicle to lug the kids around, there’s no better offering than the Volkswagen Amarok. It combines comfort with that customary VW quality we know so well and performance that’s pretty much unmatched at this price point.

Yes, the X-Class will beat the Amarok in terms of its interior; and the way it drives could just pip it to the post, but you’d be splitting hairs. You will, however, pay roughly £14k more for the privilege. I know where my money would go. 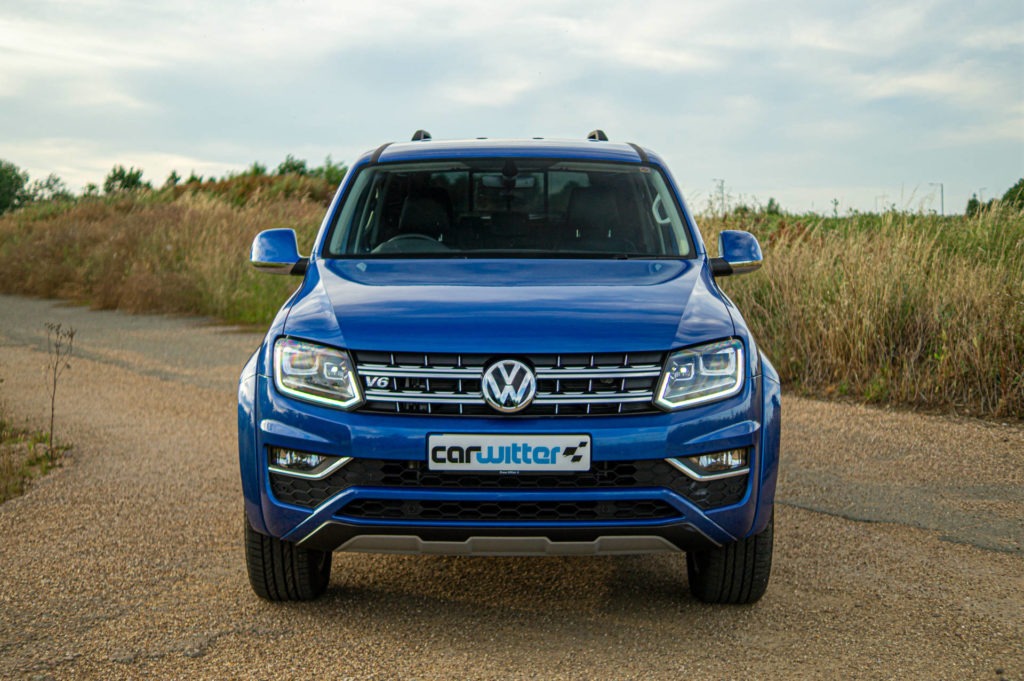 If you fancy speccing your own Trendline, Highline or Aventura you can do so here on the VW UK website.

Top 10 Cars Footballers Own – What do The Best Players Like to Drive?

Taking my CBT with Honda School Of Motorcycling