Taking a Jaguar XF Sportbrake to the Alps

Occasionally in this industry, you get an email that makes you stop in your tracks, something so different you wonder who could’ve thought it up.

This time it was Jaguar’s turn, they’d invited us out to the Alps to be towed up a ski slope in homage to Graham Bell’s Guinness World Record that was achieved last year.

Three weeks later and I’m peering out of the window onto snow-laden fields below. Lyon looked like a winter wonderland, but this was only a light dusting compared to what was in store.

Making our way through the beautiful black metal and glass airport, it was like infiltrating a Bond villain’s lair. Heading down to the dimly lit underground car park and our rides awaited, four 2019 spec Jaguar XF Sportbrake’s with daytime running lights piercing through the darkness.

We picked the 3.0 litre V6 diesel, 296 BHP and a 0-60 time of 6.1 seconds. A lovely wafty barge with plenty of power for our road trip to the Alps. Three hours of motorway and mountain road lay ahead of us.

Black tarmac and lightly dusted fields soon merged with frozen trees bending heavily under the weight of the snow. Scenery turns from flat to mountainous, huge pieces of rock sprout skyward and we’re heading straight for them at 80 MPH. A tunnel appears from nowhere and whisks us indoors allowing us to escape the elements for a few moments.

The further we drive the lower the temperature drops on the dash, halfway and we’re at -5, as we start our ascent at the edge of the Alps, the number is -10.

Snow covers the road between the heavily salted slush, switching the XF into ‘snow’ mode those 296 horses are instantly tamed. This setting reduces power and negates slip, like a wintery guardian angel when the going gets tough.

Thankfully we also had winter tyres fitted, and over the six hours of snowy driving to and from the Alps they didn’t miss a beat. Even down to temperatures of -15 they remained supple and cleared the snow from the tarmac beneath.

As that sat-nav turned into a mess of squiggles, we knew the toughest section was ahead. Climbing thousands of feet, in short, sharp turns. Keeping what I thought was an adequate pace in light of the conditions a few vehicles moved out of our way to let us pass.

A few minutes later I catch a small yellow van in the rearview mirror, I’m being hustled along by a postman. My driving prowess no match for the locals.

Pulling into La Plagne and the snow started to fall, we’d breached the invisible temperature barrier that had protected us from the worst of the weather along our climb. A dash for the hotel and we’d been safely delivered by our rear wheel drive XF.

Tomorrow we’d see what the all-wheel-drive version could do.

Waking up at 6:30 am we need to be at the slope in an hour. Arriving promptly we find a pearly white XF in the middle of the ski slope, the sun hasn’t yet risen, and blue hues fall across the sleepy chalets. 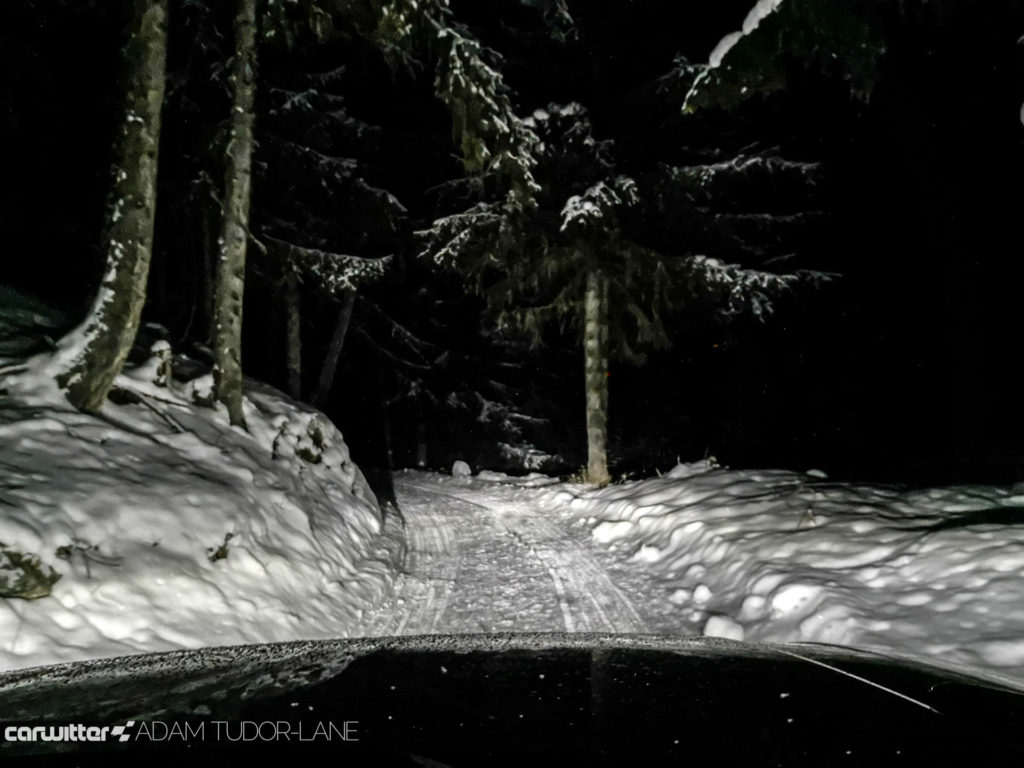 The temperature is also on the frosty side, -16 greets us. You can’t take your gloves off for more than a minute, otherwise you feel your bones freezing form the inside out, your eyes water due to the chill and then your eyelashes start to freeze and stick together, if you’re unlucky enough to get ice on the inside of your goggles it also chills hard within seconds. Totally inhospitable.

Standing by the side of the slope, snowboard in hand and I start to wonder why on earth I agreed to do this. The XF pulls up after just towing a skier along at a breakneck pace.

Feeling like my time has come, I strap on my binding, pull the tow cord tightly and wait for the tug as the snowy cat scrabbles for grip.

Moments later and I’m on the floor. Yup, that didn’t go so well. After three goes I can just about make it halfway through the run. More practice and I’d have nailed it, sadly time escaped us, and the slopes were about ready to open for the day.

It’s far harder to keep a snowboard on the flat and level; you’re always using your sides to cut your way into turns. So not wanting to catch my toe edge and face plant in the snow at 20 mph I was relying on my heel edge to steady myself.
As soon as you make too many heel turns your way out to the side of the car, couple that with the uneven churned up surface and it makes it incredibly tricky to stay straight and upright.
The skiers fared far better a guy that has never even skied before in his life managed it! Urgh.

The most impressive thing about this whole ‘stunt’ though, was how well the Jaguar coped without snow chains or studs. Simple winter tyres gave enough bite with the all-wheel drive to pull us along with ease.

Afterwards the XF even made it halfway up the ski slope without so much as a stutter.

There’s something to be said for a nice big estate car too, especially in the modern age of the SUV. Carving our way up to La Plagne the XF felt far more nimble than its length and weight should. It was like we were in a sporty saloon, there’s no way on earth I’d have wanted to navigate a Range Rover through the same domain.

So instead of thinking that a car with lots of space equals an SUV, consider an estate. They’re far nicer to drive and prettier to look at, especially the Jaguar XF.

Investing in a 4×4 Van – Do You Need One and Which Model Is Best?