A year or two ago I got the chance to drive the all-new Mustang around Millbrook. There’s a circuit there called the ‘Hill Route’, it aims to mimic the flow and undulations of a tight road sweeping through the Swiss Alps, what better way to see how well this new ‘stang corners?!

After all, its cornering abilities had been much hyped for this iteration, proper rear suspension and developed with European roads in mind. Perfect scenario.

Three corners in and I’m thinking…what a mess. My original thoughts were confirmed, the 5.0 litre V8 Mustang is still a hugely over engine muscle car only good for straight line speed.
It wallowed and poured itself through corners, acceleration and braking were met with lift and dip…it didn’t feel composed at all.
Now, this was pushing hard through a demanding series of twists and turns developed to show a cars imperfections. On the open road, these shortfalls would have taken far longer to become apparent.

I spent around 20 minutes with the ‘stang, but it was enough to show that it’s still no sports car. 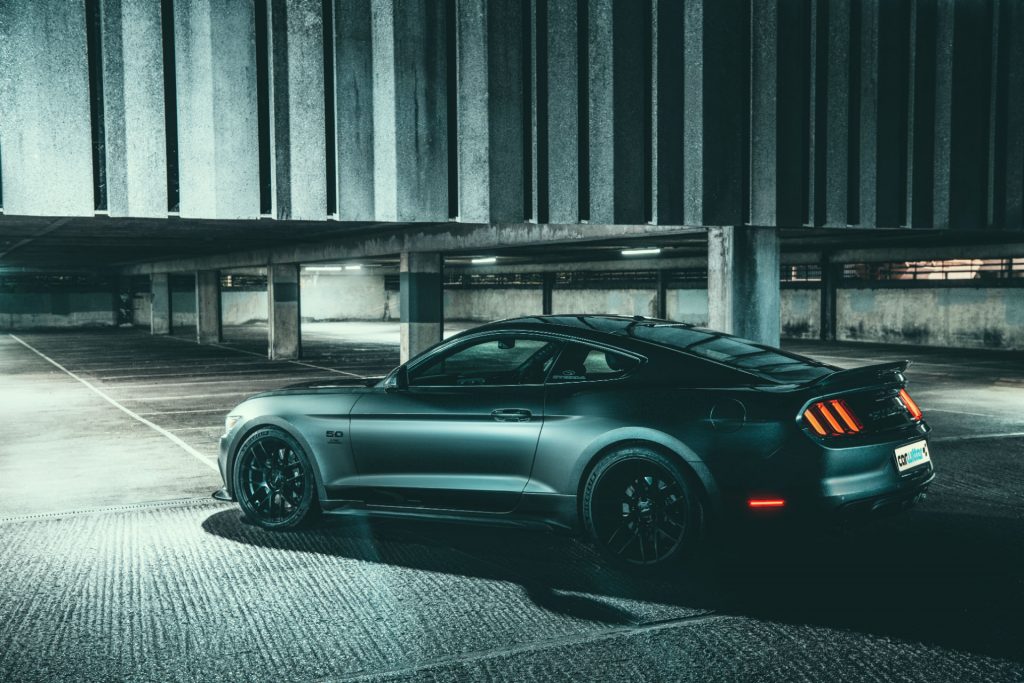 Earlier this year I saw a press release regarding a tuned Mustang, the Steeda Q500 was being unveiled at Autosport. Reading into it the development work seemed rather solid, this wasn’t your normal ‘add even moare powah to a Mustang’ kinda affair, the bulk of the upgrades were around the suspension.

That was it, the long and short of it. That was until I was asked if I’d like a loan of the Q500 Enforcer. Hell. Yes.

A quick phone call later to Adrian Flux and we were insured on a short-term policy and ready to go. 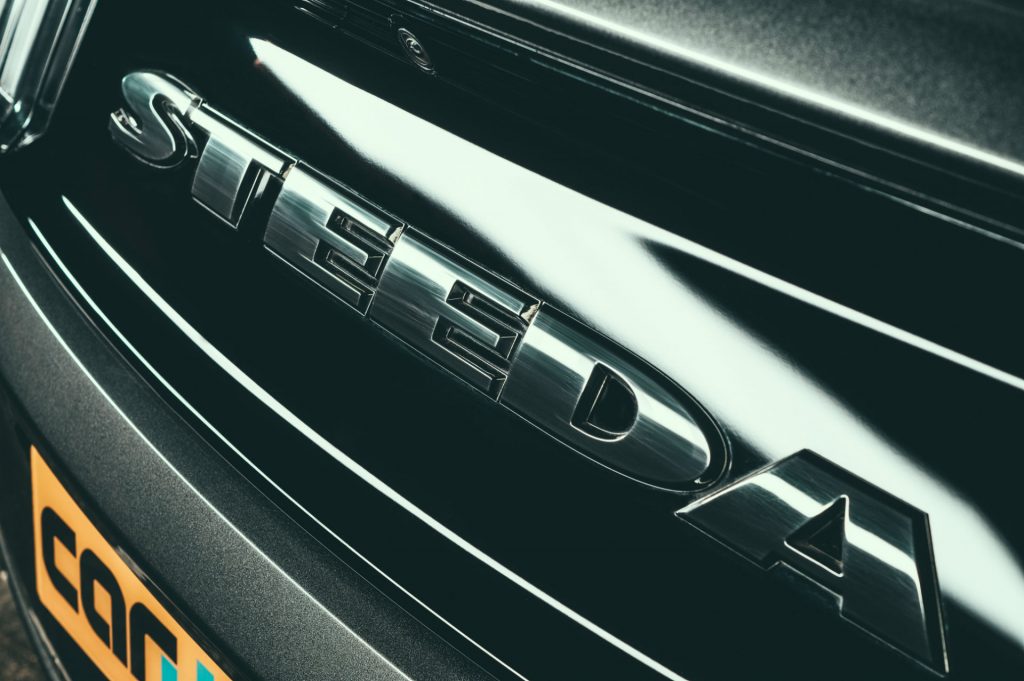 By default, the Steeda Q500 comes with a high flow cold air intake system, a custom engine map and an axle back exhaust system to take care of the power increase. 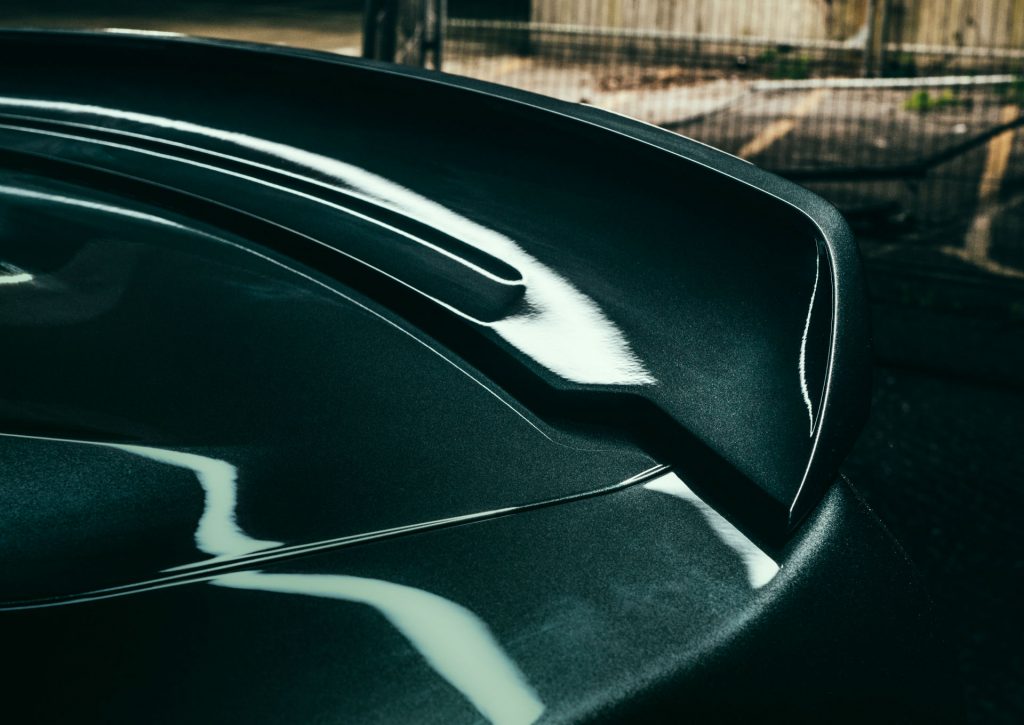 It had also received a Kooks cat-back performance exhaust with a H pipe, along with 20-inch Velgen VMB7 wheels staggered 20 x 9 on the front and 20 x 10.5 on the rear. A set of Michelin Pilot Sport 4S finished off the car. 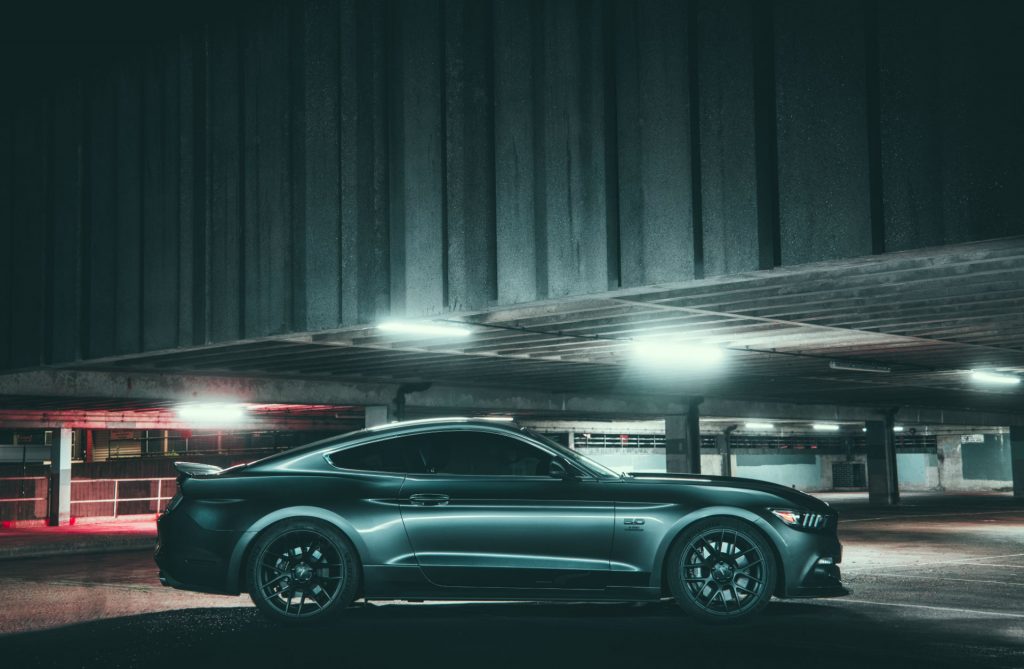 Incredible is the only word to describe how flat the Q500 stays when being threaded through a corner. There isn’t so much as a dip to be felt, that long bonnet stays perfectly horizontal stretched out in front of you.

Turn in also feels far sharper, there’s still a lack of direct feel as you get with nearly all modern cars these days, but now the ‘stang has a certain crispness to it. You can place it right where you want to.

Cornering flat is all well and good, but not if you’re spinning up the rears with traction control kicking in the whole time. That problem just doesn’t occur in the Steeda; those wider 295 section rears give you so much confidence to power out of corners early. If you’re a hooligan, you can make it break traction with high revs, but drive it normally, and you can lean on those Michelins like you wouldn’t believe. Don’t forget this car weighs the same as two current gen Suzuki Swift’s, so it’s no lightweight. 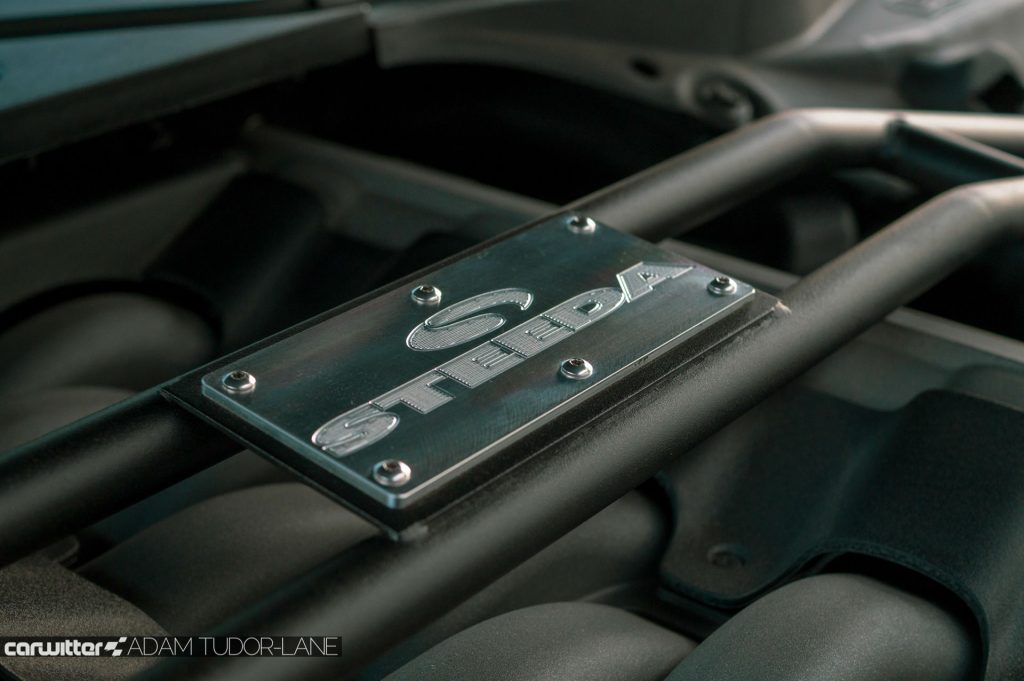 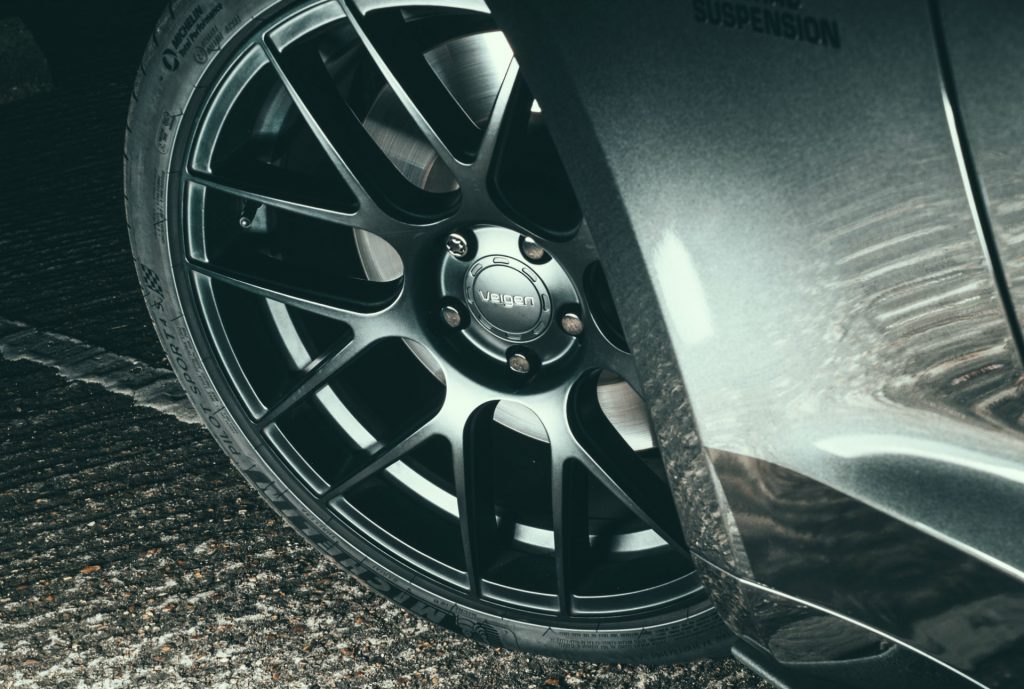 If you were to get on the power early in a V8 jag out of a corner, traction control would be in disco mode, and that little angel on your shoulder would be saving your life before you went rear end into oncoming. However, that doesn’t happen in the Q500. Enter the corner, balance the throttle, then floor it midway through and you’re out the other side with just a V8 grunt and no dramas.

Now whenever I think coilovers images of boy racers in slammed hatchbacks come to mind, the type you follow bouncing down the road because the setup is so stiff. Harsh suspension can certainly ruin a vehicle, but when it’s done right, it’s sublime. 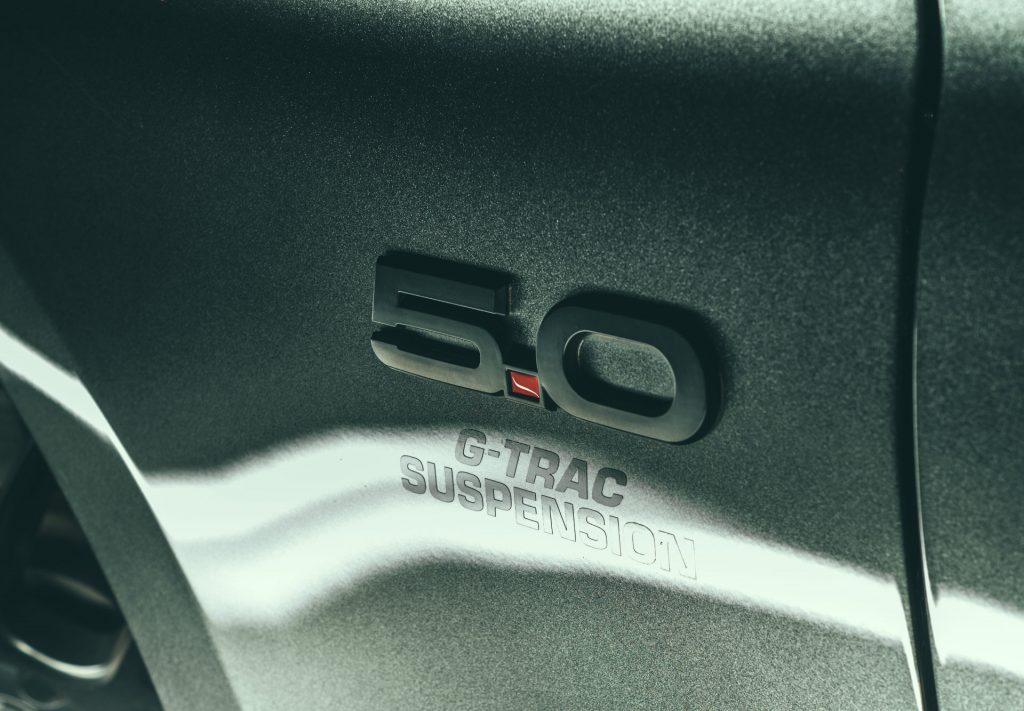 The Steeda follows the latter. Custom dampers and springs all round give a firm but not overly stiff ride. Around our potholed town centres you’ll notice it more, but as soon as you get on a half decent stretch of road, you’d be fooled into thinking it was a completely stock setup.

Being adjustable you can fiddle with the height, rebound etc. and the Q500 was in one of its stiffer settings. Sadly, Steeda doesn’t offer a ‘recommended guide’ to the different settings; it would be great if there were adjustment values for track, fast road, street, comfort etc. 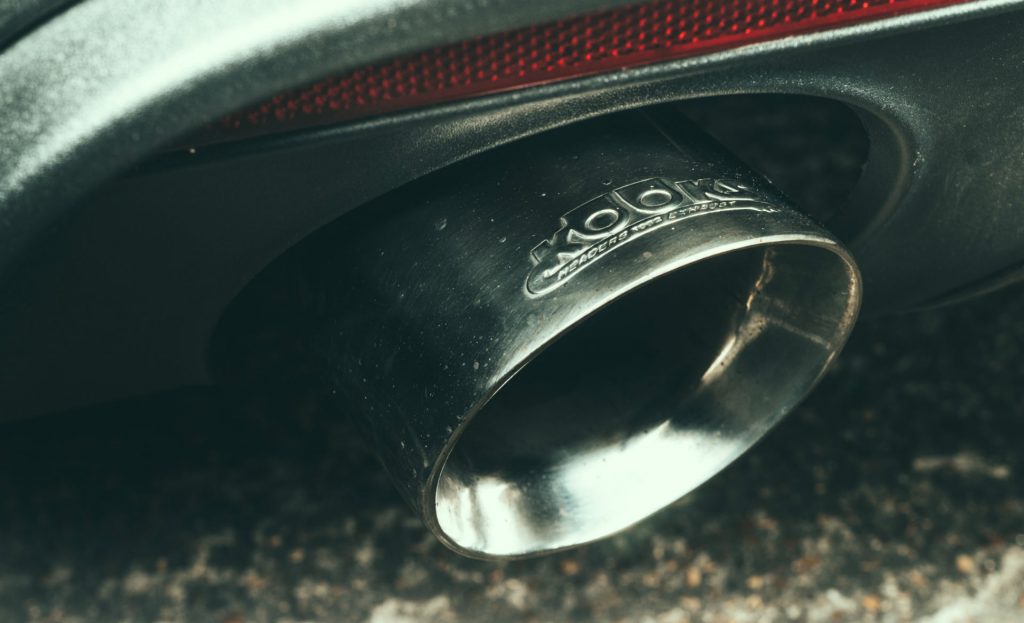 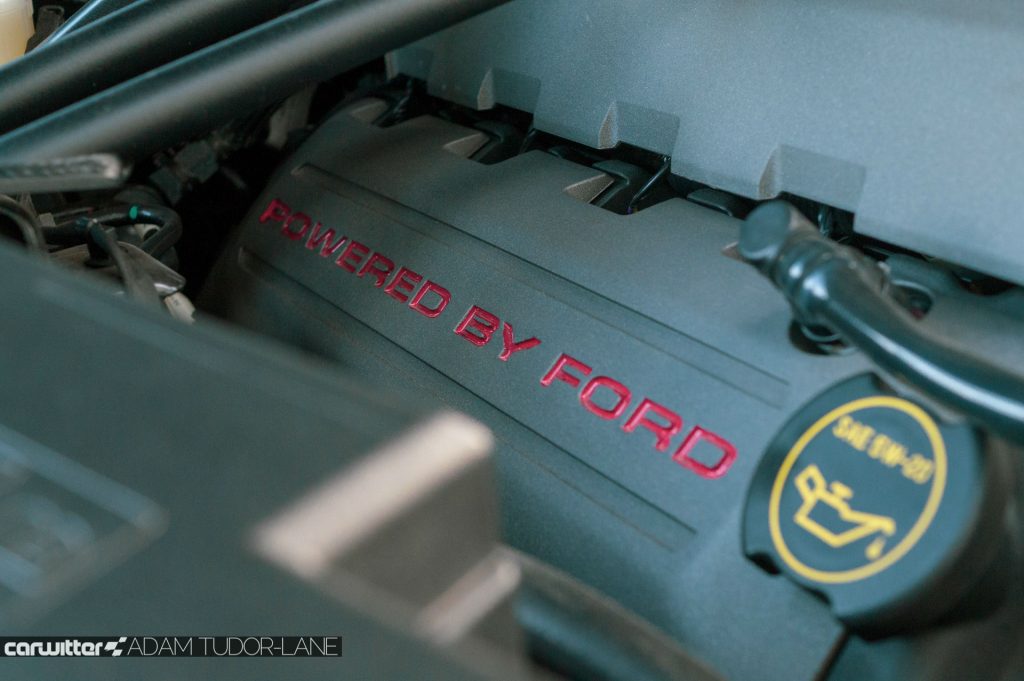 That Kooks exhaust sounds pretty incredible too. From start up the raucous is instant, it’s the type of car you want to start at 8 am on a Sunday morning just to be THAT guy. It’s not an active exhaust, so you’re stuck with it 24/7/365 which is fine for the most part, but the drone in sixth gear sitting at 60 MPH could be comparable to a Guantanamo Bay torture method.

Changing down into fifth kills it straight away, you’ll just use a bit more fuel.

It sounds epic at idle; it has that low burble you associate with American V8’s. Let it hit the red line before changing up, and the growl turns into how I can only imagine taking off in a B17 Flying Fortress sounds. 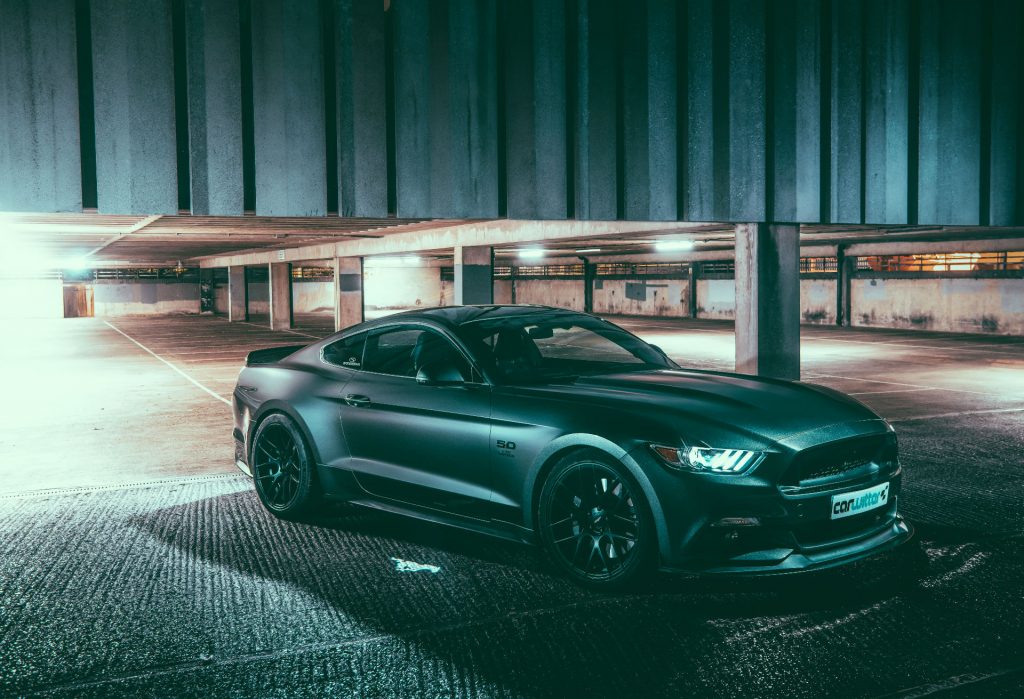 Externally there are a few subtle changes, a front splitter, rear duckbill spoiler and the addition of optional side running lights that the UK cars are left without. Most notable are the incredible Velgen 20” alloys, they look so stock and perfectly finish off the look. 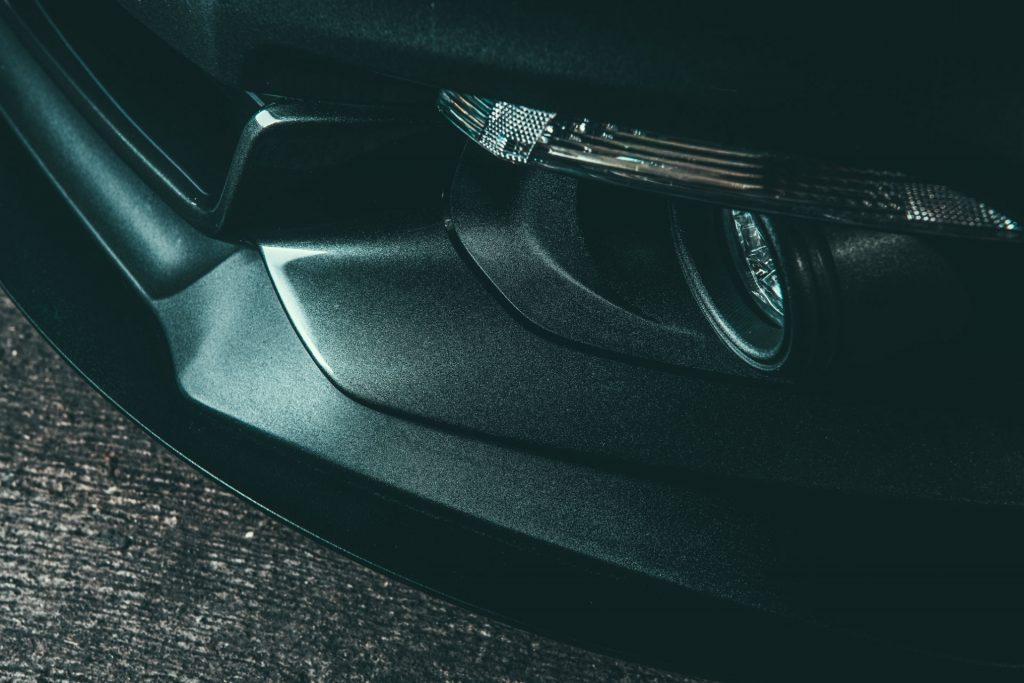 The myriad of Steeda stickers are mainly because it’s the show car. Personally, I’d go with just the Steeda logo at the rear instead of the ungainly ‘GT’ monicker, and maybe some Q500 ones by the 5.0 litre badging.

You’d probably want to de-chrome the trim around the windows as there’s no other chrome on the car…and changing the lower down running lamps on the front from a horrible orangey colour to bright white, to match the headlights.

Inside you’ll find a rather neat Steeda cue ball shifter and a super soft Alcantara steering wheel taken from the GT350R, both optional extras. Illuminated Steeda side sills are standard fit. 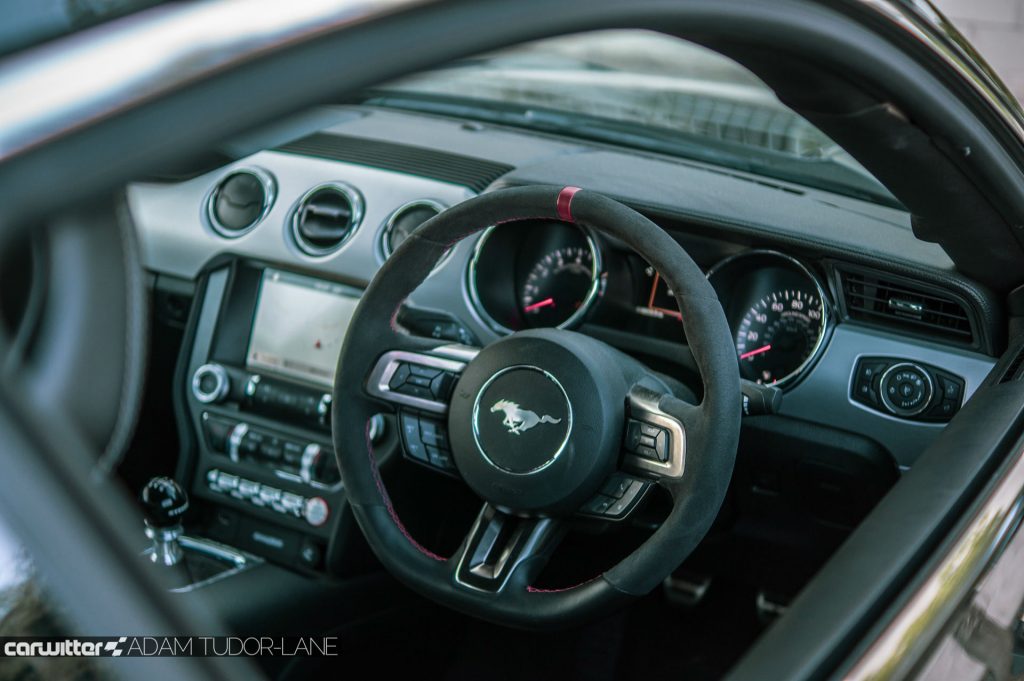 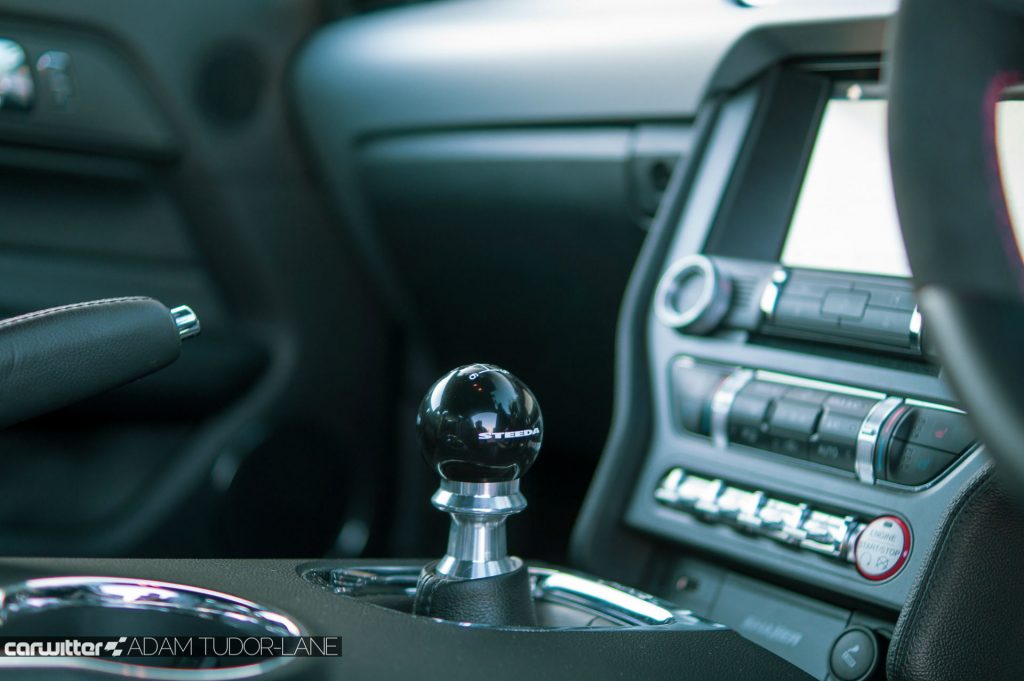 The Mustang is never going to be a sports car; it’s a huge slice of American real estate that’s good at going fast in a straight line.

However, Steeda have turned that into one that can competently corner, this ‘stang is stiffer, feels tauter and can also hold on in the bends like few other rear wheel drive sports cars can.

If you like driving and own a Mustang, you need to seriously think about opting for this suspension setup.

If you’re considering buying a V8 ‘stang, drive one stock, then drive this. You’ll want the latter. You can purchase a Steeda or any upgrades direct from Haynes Ford in Essex; this is also the place where all work is carried out.

Insurance for this feature was provided by Adrian Flux, covering all modifications on a short-term loan.

All images without watermark by Olgun Kordal. 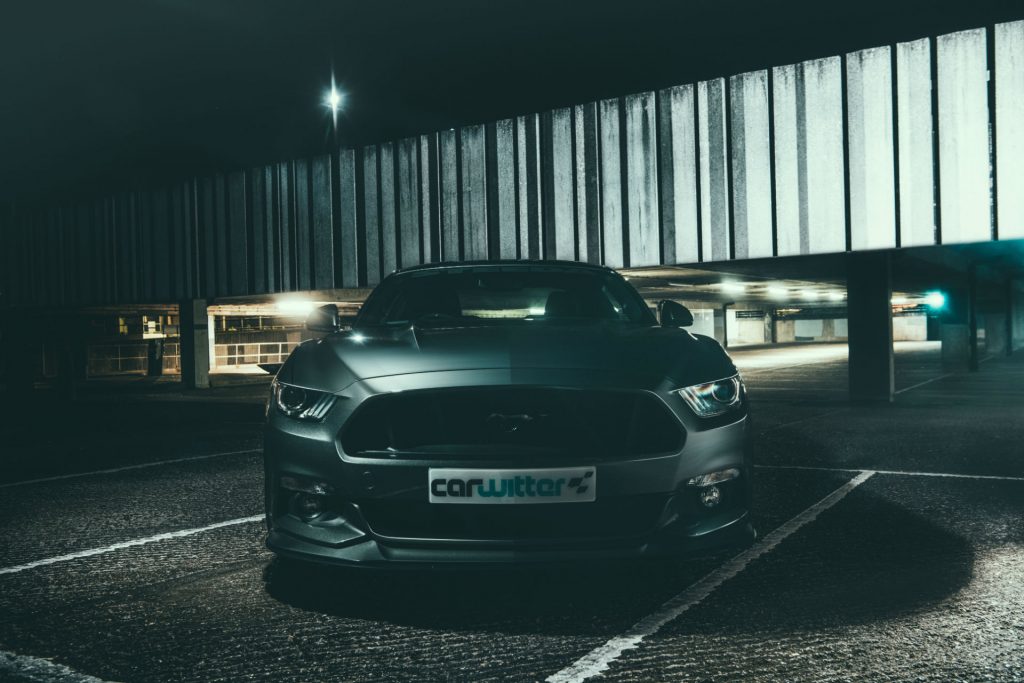 How to Properly Maintain Your New Car

How To Choose The Right Van