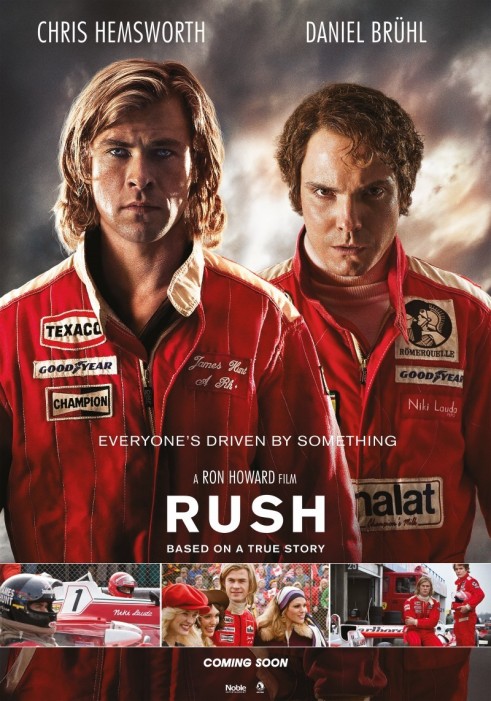 Now this isnt your full style film review, more of a ‘Why you should go and watch it’. So it will be short and sweet.

I was lucky enough to get tickets to a preview screening on September 3rd (thanks to Cineworld Unlimited).

I myself am not an F1 fan at all, it bores me. But when i first saw F1 as a kid the cars were far flimsier, the action seemed constant and most championships came down to the wire. The FIA didn’t have to introduce such things as KERS and DRS (as well as other crackpot ideas) in a vain attempt to keep racing interesting, back in the day it was, dangerous, raw and it was pure. 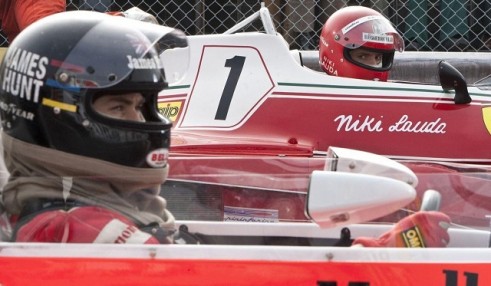 As you are probably aware Rush tells the story of rivalry, rivalry between James Hunt and Niki Lauda through the 70’s, as they both fought their way to the top of Formula 1.

Put bluntly Rush is bloody brilliant. The way it is shot intersperses original footage mainly in background elements of the film, so you will see James and Niki pass on a corner then it will cut to the pit lane, where mechanics and lovers are huddled round a small grainy TV which is showing the actual race footage from the 70’s, its great!

Filming locations included the Nürburgring, Donnington Park and the UK’s mini green hell – Cadwell Park. All of the action scenes are fast paced, visual effects are flawless. I was gripped the whole way through the 123 minutes (I guess it may have helped that all of this happened a good 10 years before I was born!).

I was genuinely excited to see this film, and it didn’t disappoint. I don’t know how true it is in its portrayal of the situation, but it was never beyond the realms of reality. Rush is raw and gritty from start to finish, the scene of Niki’s crash will cut deep with any motorsport fan, even more so if you have ever witnessed a fatal accident on track.

If you love motorsport you need to see Rush.