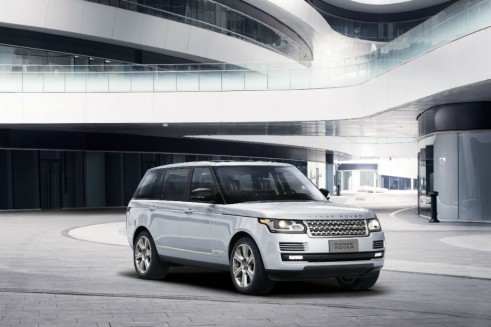 The diesel-hybrid Range, which is 186mm longer than the standard car, will go on sale worldwide in May, with JLR expecting China to be a major market.

Under the bonnet is their 3.0litre diesel V6, and this is coupled with a 35kw electric motor and an eight-speed auto ‘box.

This means the hybrid pumps out a total of 335bhp and a staggering 516lb ft of torque.

Working together the diesel and electric power units reduce the giant 4×4’s CO2 emissions to 169g/km, which although still a heavy figure is a 26% improvement on the standard car. Land Rover say it will also manage a healthy 44.1mpg.

The motor also acts as a generator, harvesting kinetic energy lost during braking which is then used to charge the battery.

Engineers at Solihull have managed to keep the additional weight of the 125lb ft motor and its batteries to just 120kg, and they say it manages not to intrude on interior space.

However the Range Rover hybrid is never going to be a silent electric cruiser, with the electric system managing to propel it on its own at 30mph for just one mile.

No details on price have been revealled yet, but expect more details closer to the sale date in May.