Motoring At The Manor 2019 Review

When visiting a new event for the first time, there’s one word you need to remember, potential. And that’s precisely the word that sums up Celtic Manors, Motoring At The Manor.

Naturally, we had to arrive in style, none of the motors in the fleet deserved to go on display at such an event. It was also a massive 150-mile one-way journey for us to check it out. A quick call to Morgan and one of their latest 110-anniversary edition Roadsters was ours for the event, perfect. 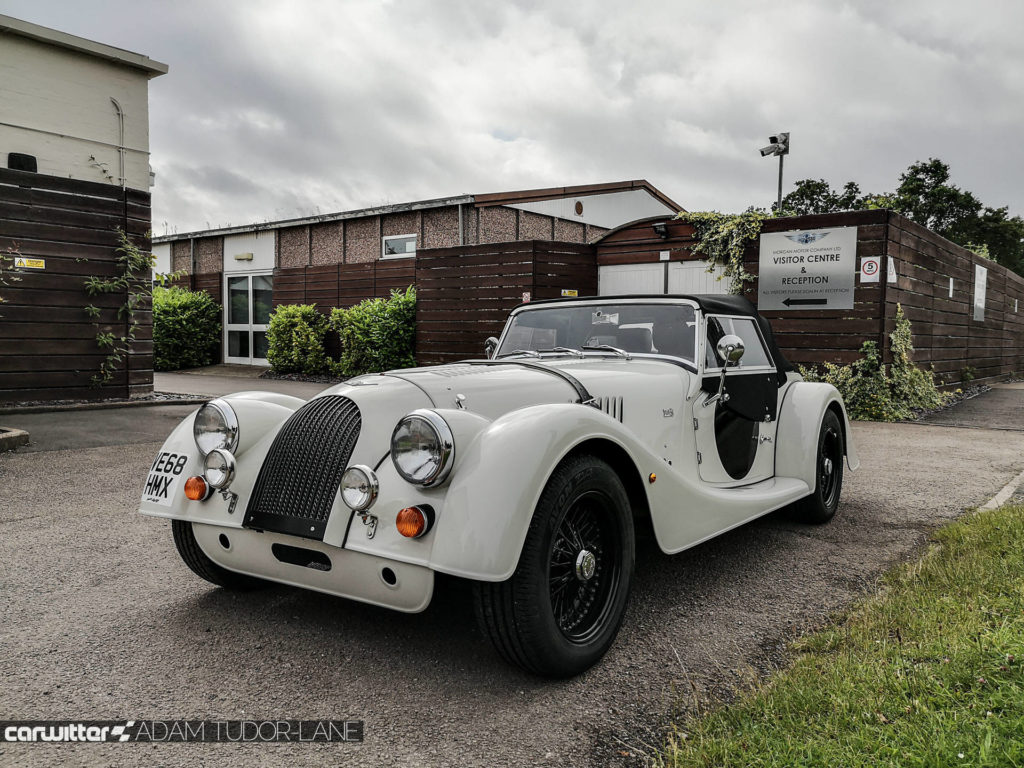 Arriving around 10 am, we parked up in the far corner with the rest of the prestige and supercar machinery. As the weather had been just a tad wet over the previous week things were a little…wet underfoot.

In front of us were sat some classic rally machinery, two Lancia Stratos’s (maybe it’s Strati?), a Renault 5 Turbo, and a couple of Audi Quattro’s, the best bits of ‘80’s rallying were present. These were heading out on demo runs of a short course that cuts through the lower half of the golf course and across the famous Celtic Manor bridge. 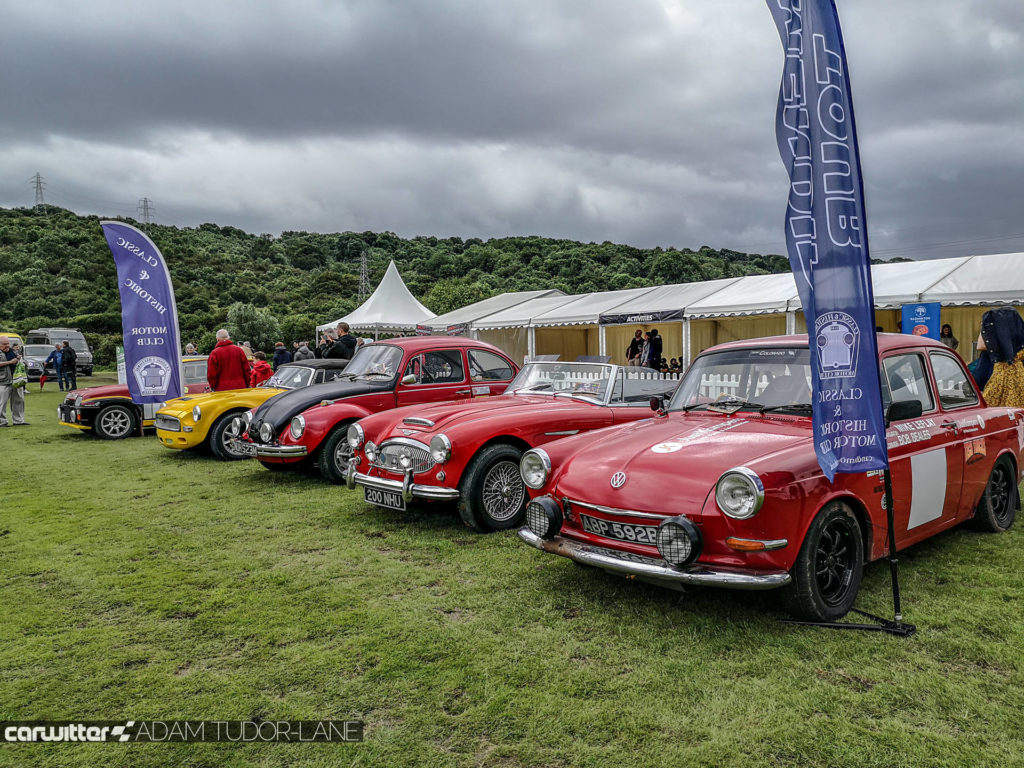 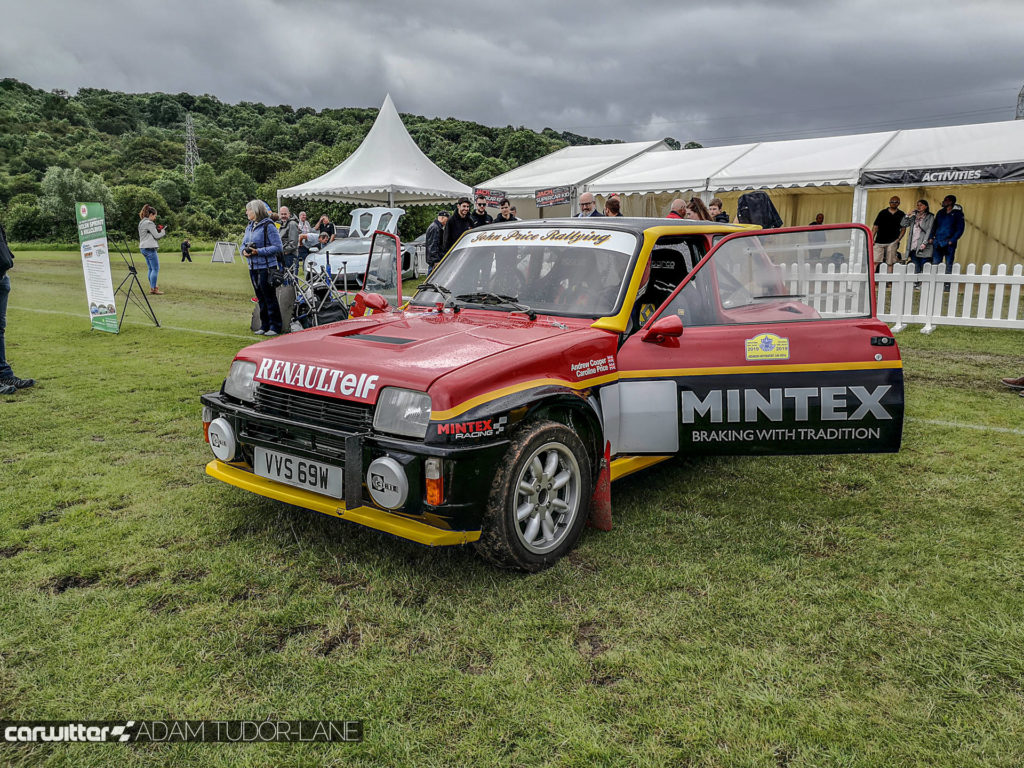 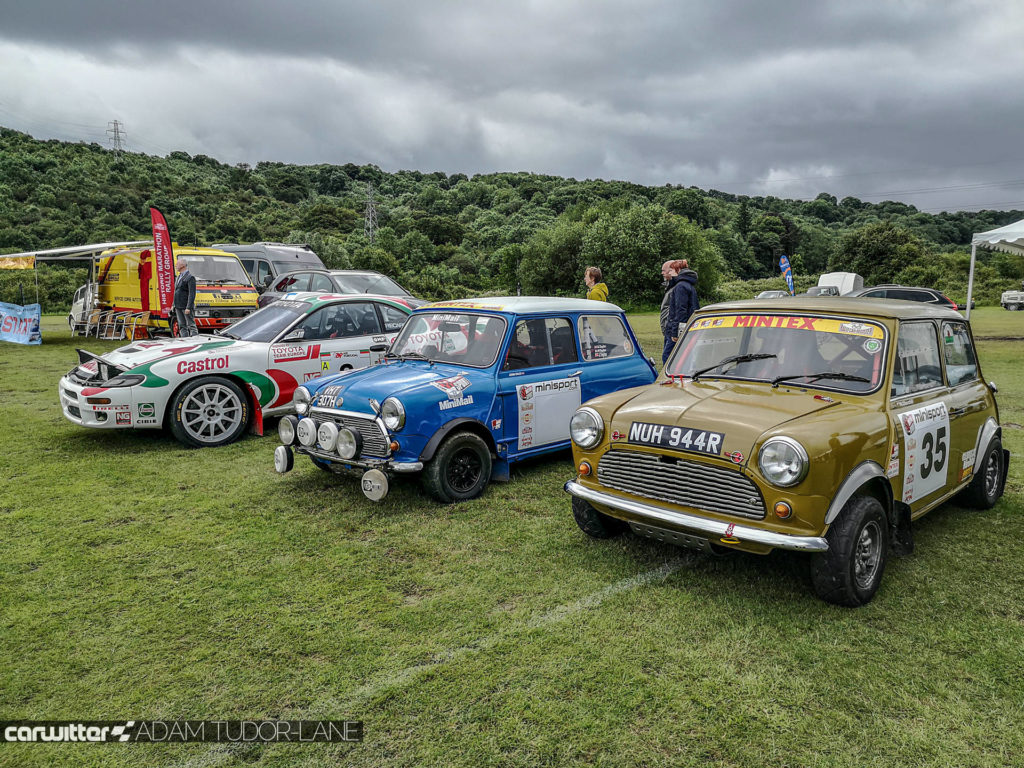 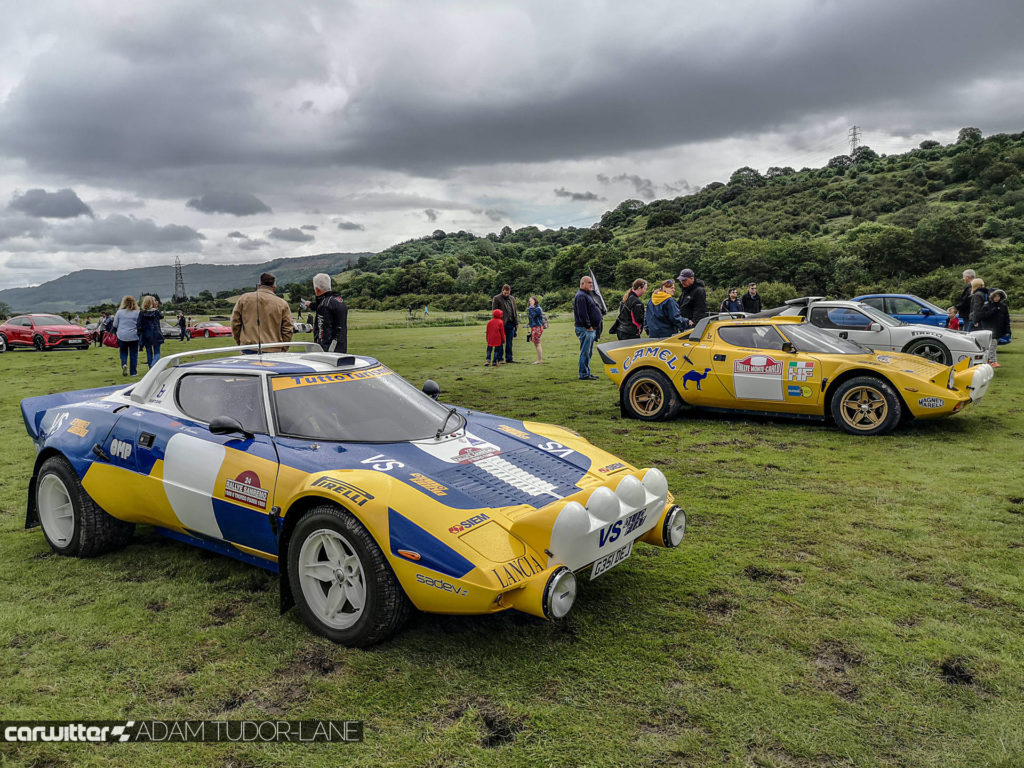 The actual event isn’t held near the hotel, nor manor house, it’s way-way down on the extremities of what must be their grounds. So don’t expect a quick walk to the hotel if you’re staying over.

Any event that can command two Ferrari F40’s is doing pretty well in our book, and that’s exactly what set next to us for most of the day, it was hard to choose between the two, but the Morgan garnered so much attention even next to something of this worth and cache. 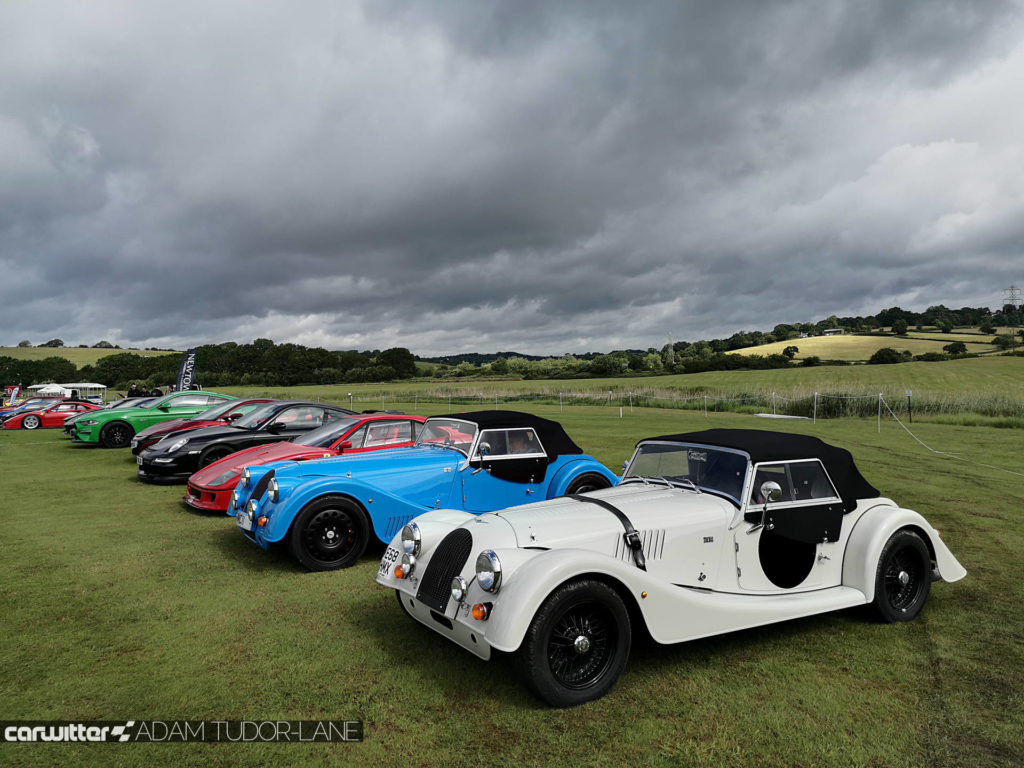 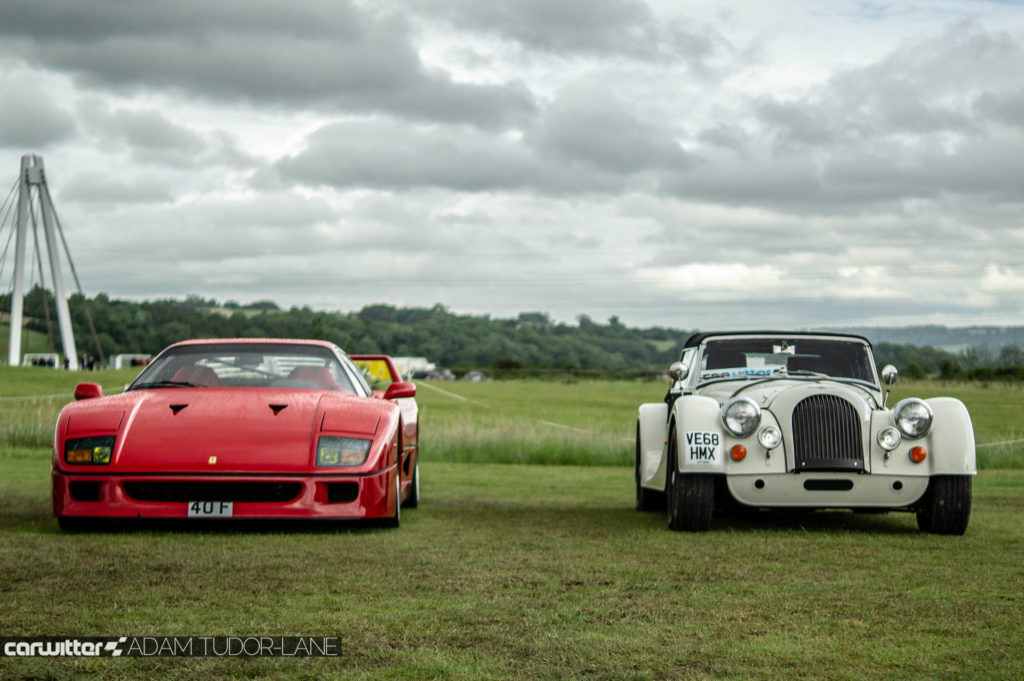 Le Mans played on a large screen with nearby shelter for the infrequent heavy showers that plagued the day, the drivers were well looked after with hospitality and food while average punters had a handful of freshly cooked high-quality food stalls to pick from, or they could pay for a picnic, £60 for two people. 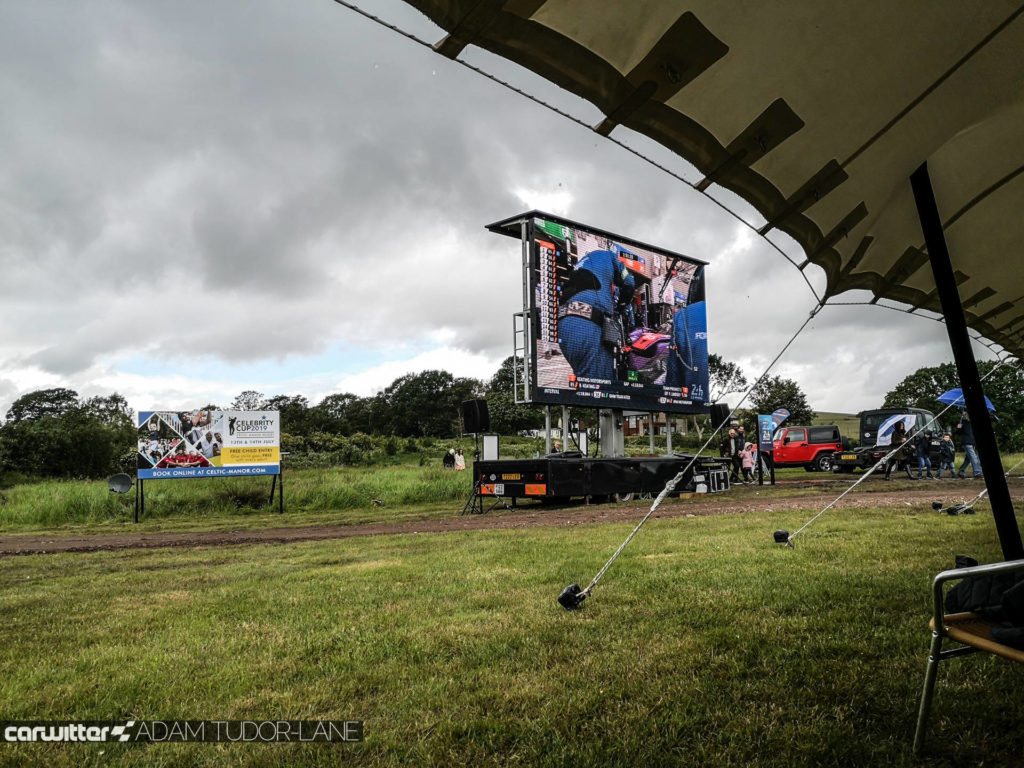 While the event was busy with crowds, it somewhat lacked in cars; this could be due to the weather…the day wasn’t so bad with sporadic downpours but would you want to take your supercar through a muddy field and park it up? Probably not. There was around half the quoted number of cars, 100 or so, with some notable absences, especially from the Concours event. 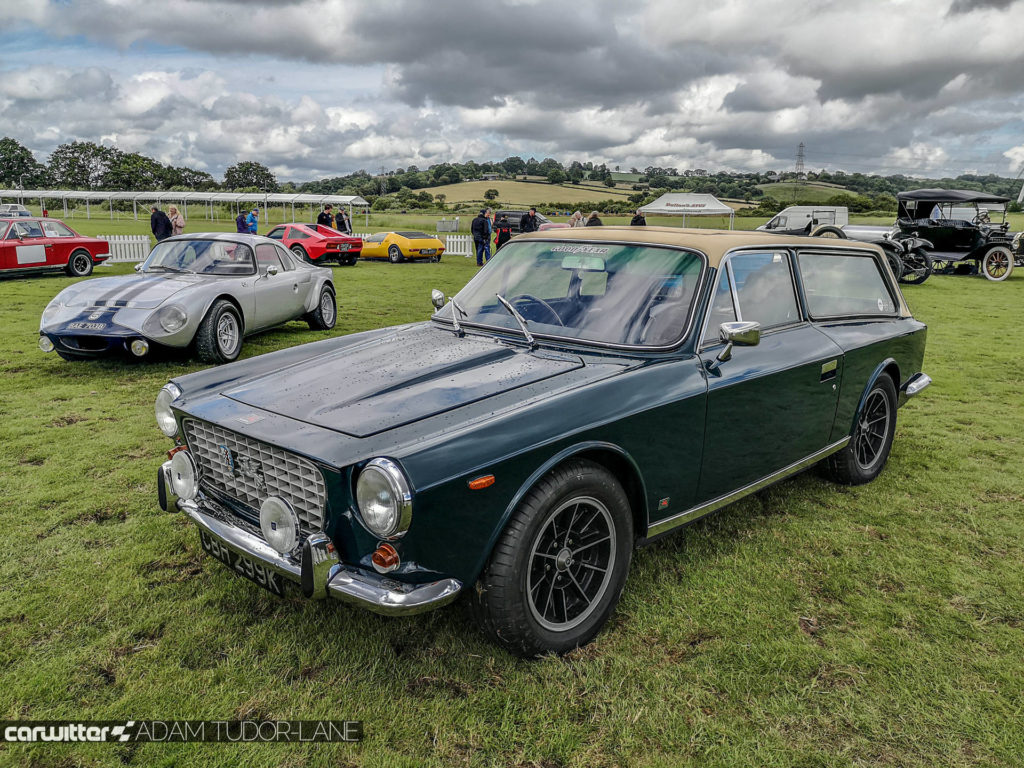 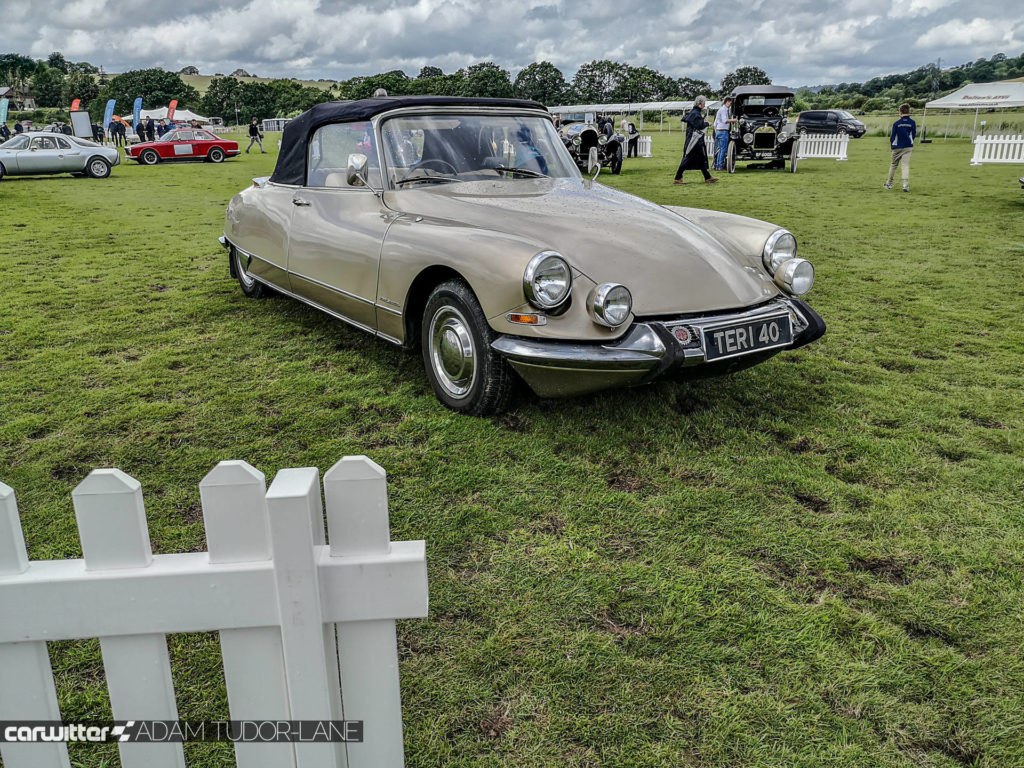 Heading over to the far side of the show the demo runs of the rally classics were enjoyable to watch, the conditions remaining tricky thanks to the flurries of rain. Demo runs were happening throughout the day with varying intervals, but there was always something to watch.

Up near the show entrance, a gaggle of Aston Martins hid something rather special, a brand new Zagato. Again, to get such cars to an inaugural event is pretty damn good. Safe to say the Zagato looks as stunning in the flesh as it does in photos, sadly my spare £500,000 is all tied up in various assets right now. 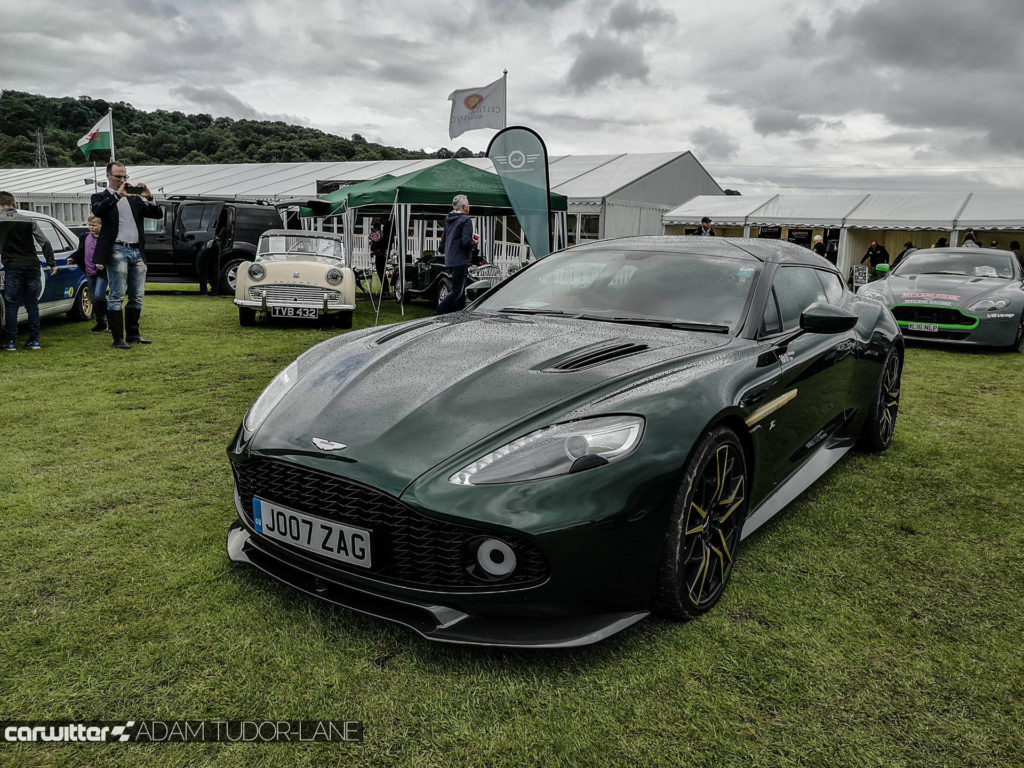 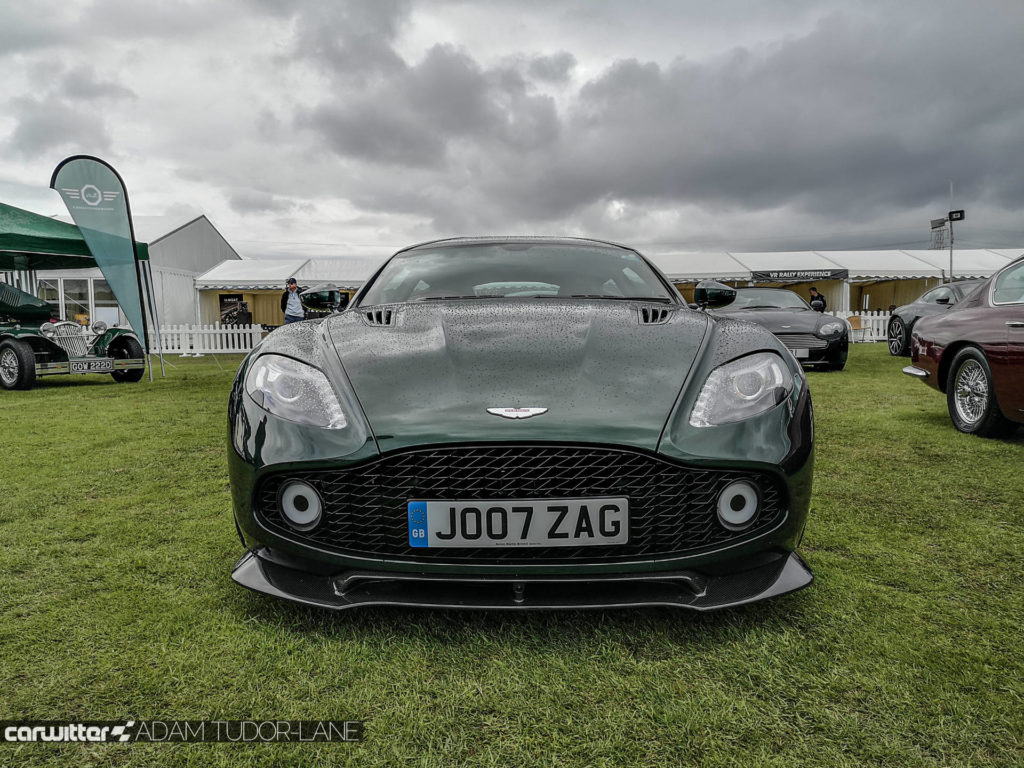 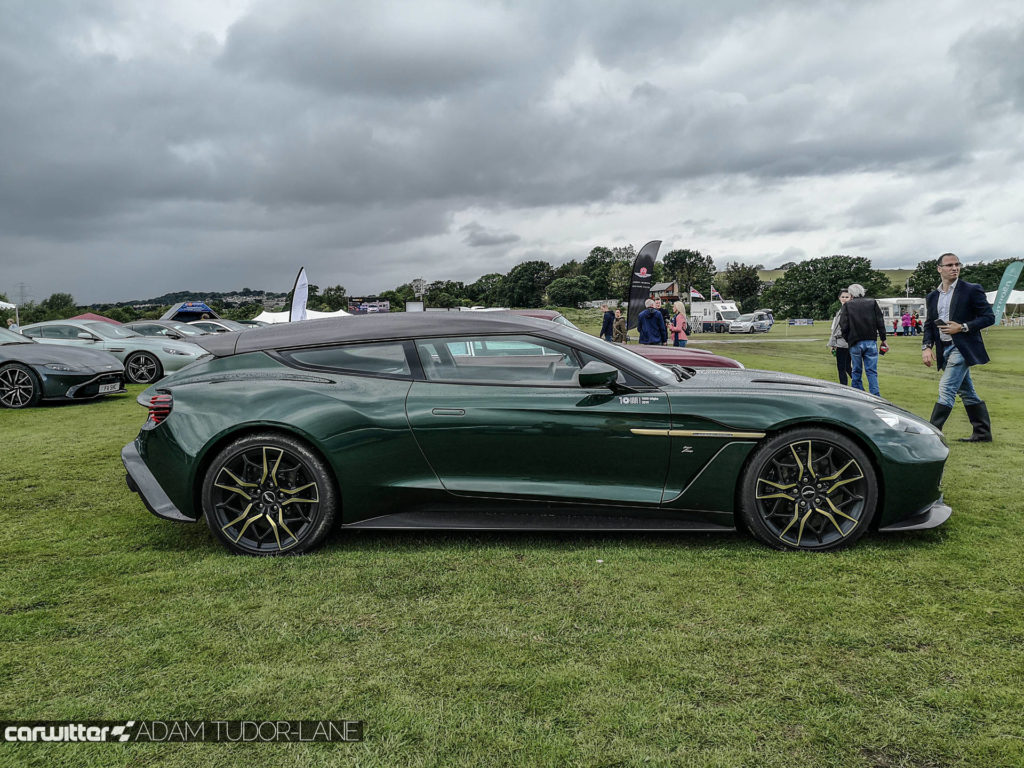 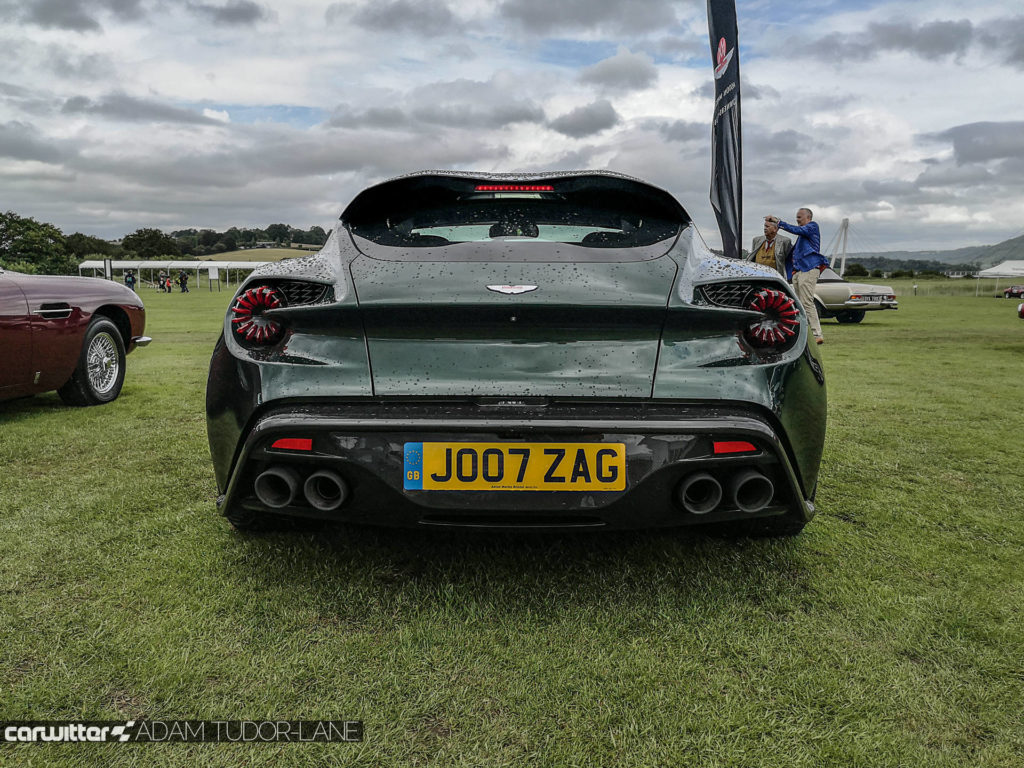 Smaller marquees had VR experiences, exhibitions from local schools, a high-end jeweller as well as a Jaguar XK120 which I’m not entirely sure why it was there.

All in all, it was a modest start to what could be a superb event for Wales, but there are a few things they need to sort first…

A big thanks to Morgan for their Roadster, it was a pleasure driving this too and from Motoring At The Manor. We arrived in unparalleled style and garnered so much deserving attention throughout the day. 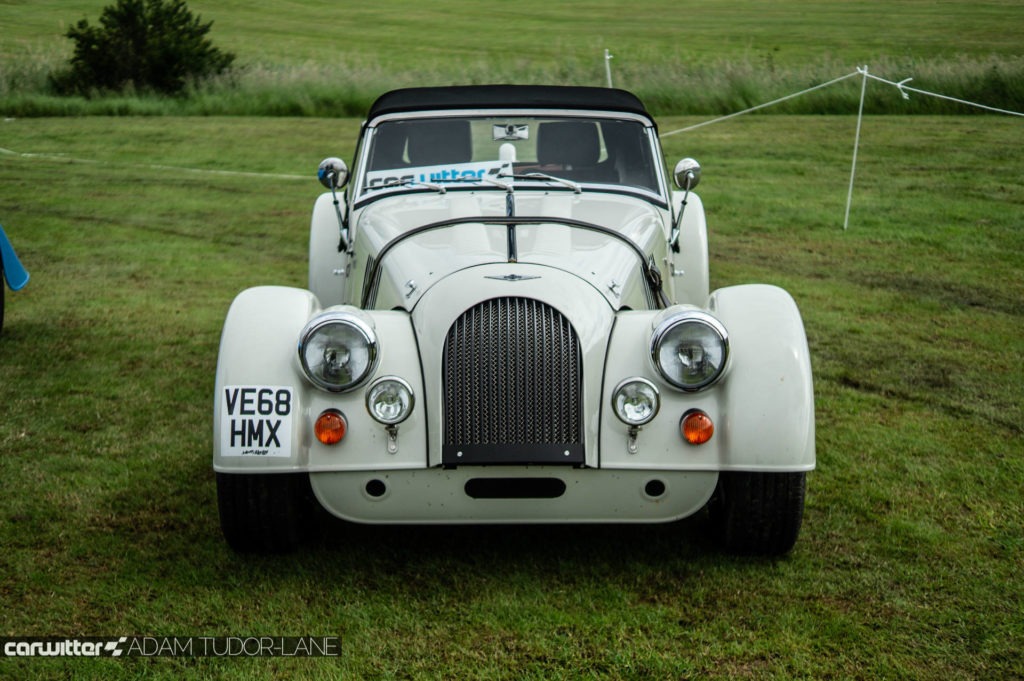 What we’d change for Motoring At The Manor 2020:

Having been to MANY events like this here are my thoughts on what should be changed for the 2020 Motoring At The Manor:

Space – There was far too much space between everything, made worse by the lack of cars. If you can see you aren’t going to get the number of cars you hoped for, then move everyone closer together on the day. It resembled cars haphazardly placed in a field. Concentrated would have made the event look far more impressive.

Layout plan – Stick to the layout plan, things were either missing or in the wrong place, which makes it confusing for anyone attending.

Dress code – Enforce it. The website and invites said to dress up in ‘Summer chic or vintage glamour’, yet matey boy at the next table turns up in jeans, trainers and a hoody…along with half the rest of the attendees. Either make it super exclusive to attract the right clientele for a premium event, or forget the whole dress code thing. It just makes people who made an effort feel awkward and wonder why they bothered.

Ground – The weather didn’t help this at all, but don’t hold it on the same weekend as the Polo competition. The area where everyone walked and the cars were parked was already churned over thanks to 20 odd horses pounding it the day before.
To that end, try and make MATM a whole weekend; that way, more people are likely to attend. Offer a bespoke rate for a night’s stay if a person’s vehicle is displayed. 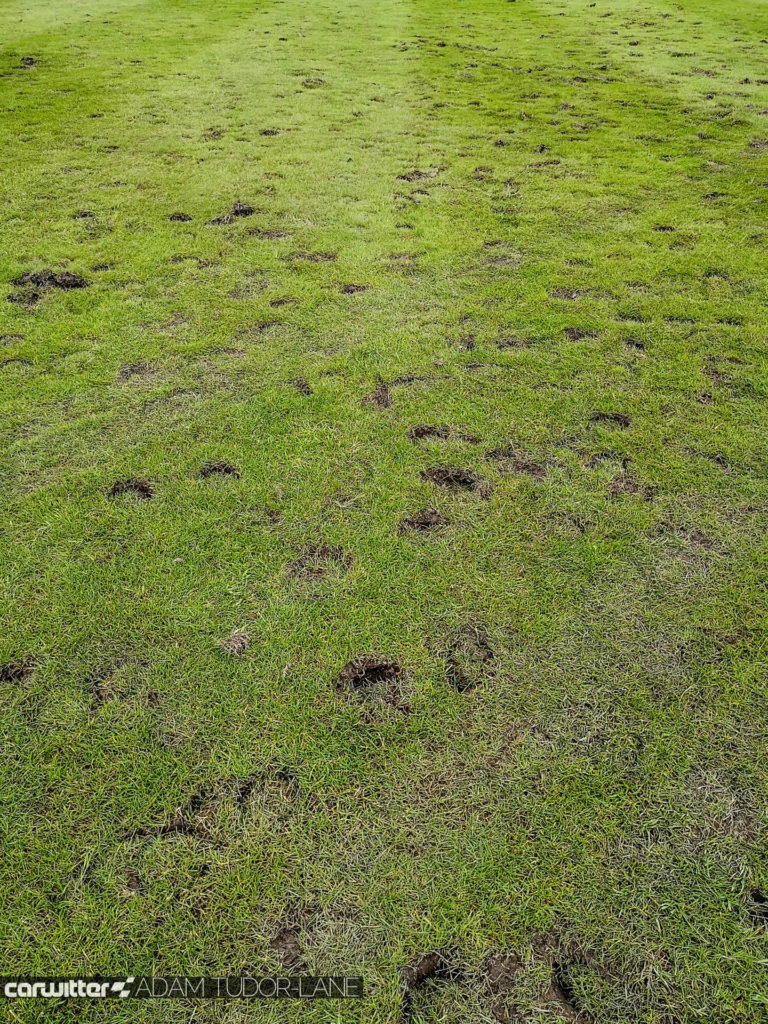 Racing – Turn the demonstrations into a proper motorsport event. The course may be short but add a timed element to it along with commentary. That way, excitement would be boosted for people watching, and more drivers would bring their cars: different classes, winners for each and overall for the title of ‘King Of The Bridge’.

Picnic – If you’re charging £60 for a hamper make it truly special. Yes, there was lots of food, but none of it stood out, and it certainly wasn’t ‘gourmet’. M&S provide fancier ready to eat picnic food. Make it local, ‘the 25-mile hamper’, that way you boost local business and can warrant charging that amount for two people.

Grand entrance – Walking into the show was along a back path, past the rear of the big LED screen which had two diggers sat not far away. Nothing was stunning about it, and it just opened out into a field with cars parked in the distance.
Take a leaf out of Salon Prive’s book, fence the entrance off, have wooden decking, large gates etc. Again, a local company would love to have their name on the gates with hundreds of people walking past.
Likewise, If you know two Ferrari F40’s are attending, damn well put them as soon as people walk in, not at the far end of a field. 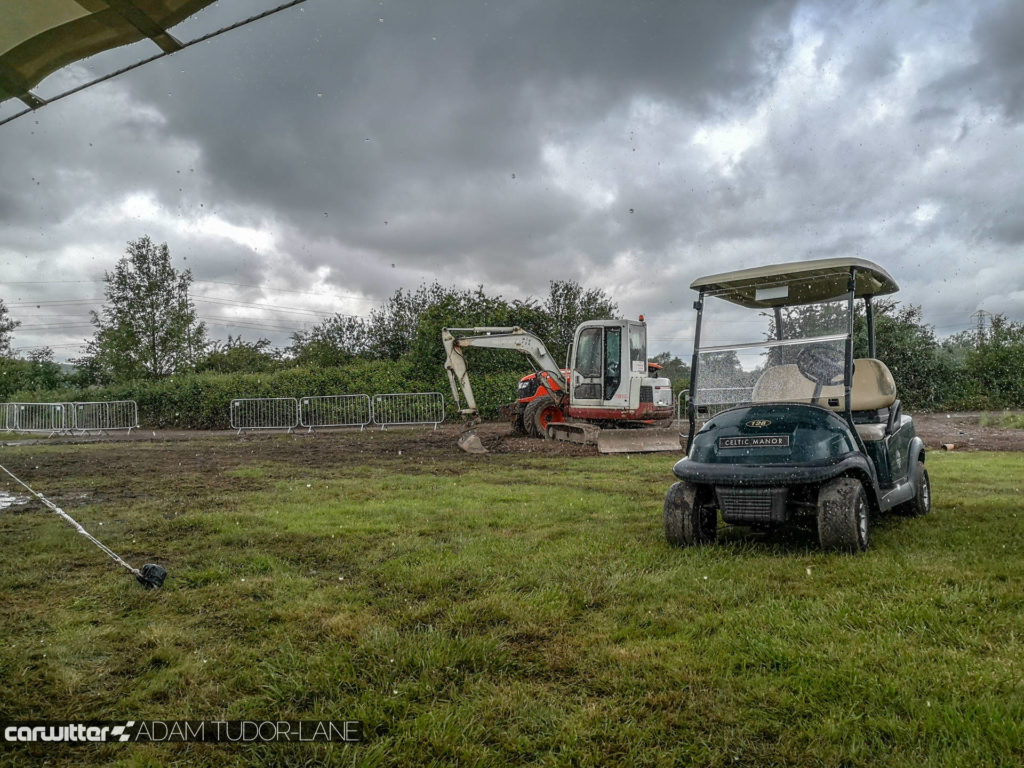 An event like Motoring At The Manor takes a ton of work and effort to pull off and arrange; I’m not undermining or belittling that at all. But there are tiny details that are so easily fixed that could have wowed everyone who attended from the very start.

They need to look at a few other events, cherry pick the best bits, combine them and make MATM a must-visit destination for petrolheads across the UK. It can be done.

There’s a ton of potential, and we’ll be eager to see if they go full force next year now that attendee numbers were so strong for the inaugural event. 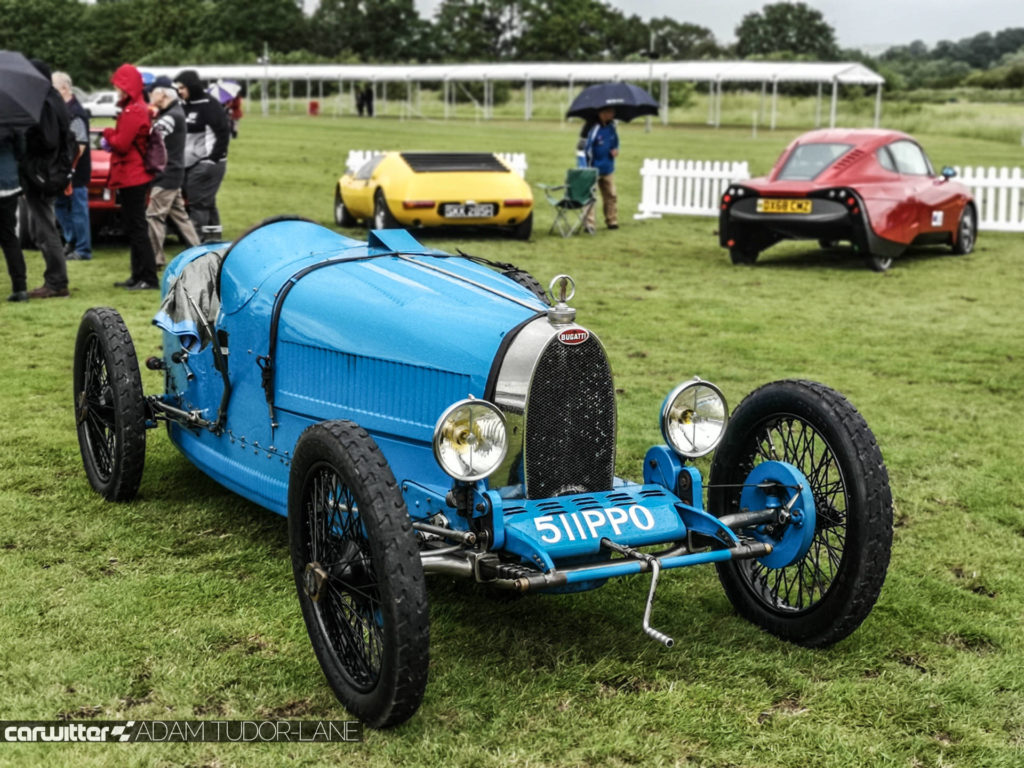 Looking for Your Next Project? Tune Up a Land Rover