Barely have the Detroit Auto Show organisers packed up their red carpet when news of the next big show is rolling in – McLaren’s stonking P1 GTR will debut in Geneva.

That show is still nearly a month-and-a-half away, but McLaren want to ramp up the excitement for the racer’s first public appearance, which follows a design concept shown at Pebble Beach last year. 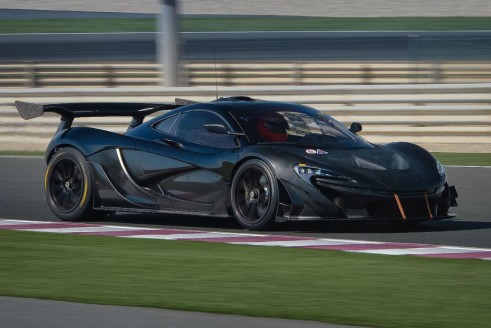 They have released a video about the development of the programme, which we’ve put above for your perusal, as well as these testing snaps.

If you’re wondering what the P1 GTR programme is all about, think Ferrari FXX, this is purely for the uber-rich, the car will never be seen on public roads.

Instead drivers will get to sample their purcheses on the track while being trained by McLaren’s best via the new ‘bespoke’ Driver Programme.

The car itself will be a monster, somehow McLaren have managed to find some weight to shave out of the P1, and squeezed more power out of the engine.

That means over 700bhp per tonne, reached, as you may have guessed, using McLaren’s long-developed track know-how.

McLaren say the P1 GTR has been pounding the tarmac in Bahrain and Qatar to prepare its setup and make it ready for anything that can be thrown at it.

The GTR moniker comes from the McLaren F1 GTR that blasted to victory in 1995’s epic, rain affected, Le Mans 24 hours, so this has a lot to live up to.

But, with stats like that, it’s hard to imagine how it couldn’t. Now, any chance of a racing version, McLaren… anyone?

F1, you need to do this more. A lot more.
Car tyres online shop Buycarparts.co.uk