There’s no doubt about it, we thoroughly love the latest generation MX-5. Although it may not have been the big handling revelation that Mazda made out, its reworked, smoother 2.0 litre lump and revised characteristics made it more manageable on the limit than ever before.

Instead of adding a hard roof to the little roadster as they have done previously, Mazda went a different way.

They created a whole new thing. A thing that had never been seen before on UK shores, a sort of coupe, Targa mashup. It’s dubbed the Retractable Fastback (catchy) or RF for short. 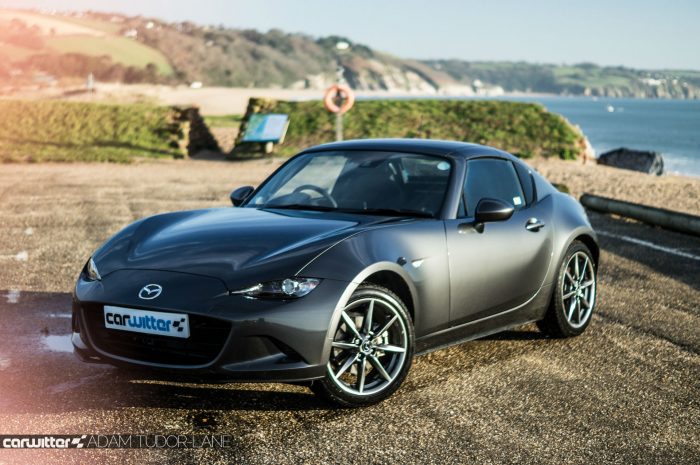 If you want the beefier 2.0 litre, then the extra cost is upped to cheeky £2,000 for the entry level SE-L Nav version. 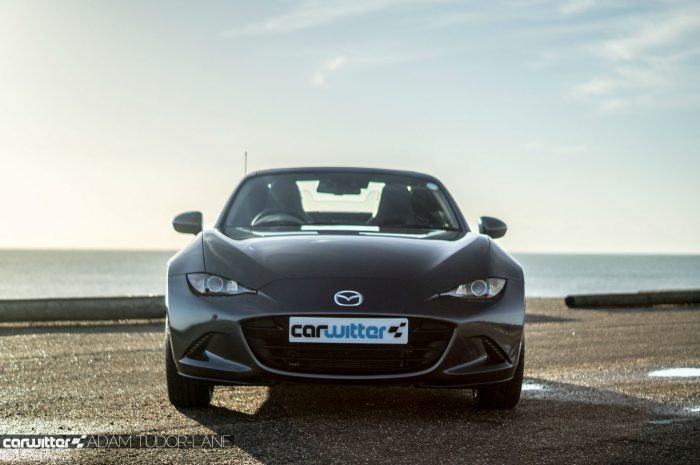 We’ve long lusted over a hard top, coupe MX-5. It did happen. Once. But it never made it to the UK. The RF is the best we are going to get for now, but damn it looks good!

There’s a minute increase in roof height at 5mm, whilst the windscreen is raked back by a few degrees more. The rear boot lid is slightly higher, aiding aerodynamics and negating the need for a spoiler.

Oh, and you don’t lose any boot space to the new tin top either. 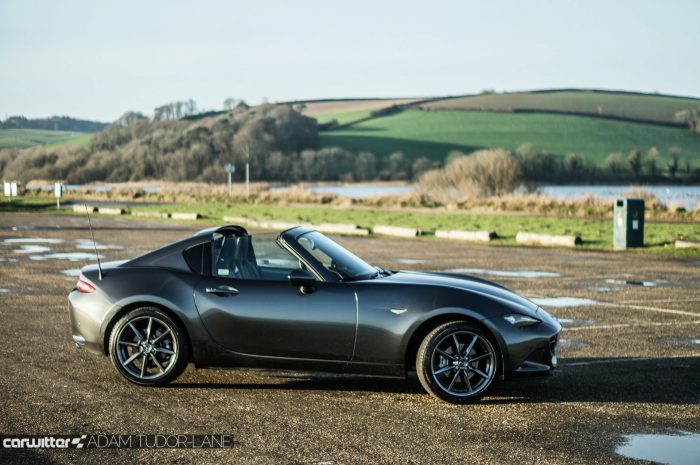 Those rear buttresses are plastic formed, and the fixed glass rear window folds down with the roof, leaving a clear plastic windbreak between yourself and the road behind.

It looks stunning. No doubt about it. Maybe a little stout from a side on perspective, but from any other angle it’s a winner. Like a modern day hardtop AC Cobra.

But with a fancy origami, 13 second, folding roof comes weight. And the penalty is the equivalent of a scrawny man, or a well-fed child. You’ll get a +40kg addition for the 1.5 and a +45kg for the 2.0 litre…no idea why there’s a difference on each.

Apparently, that hasn’t spoilt the 50:50 weight distribution of the current model…not sure how that works either. 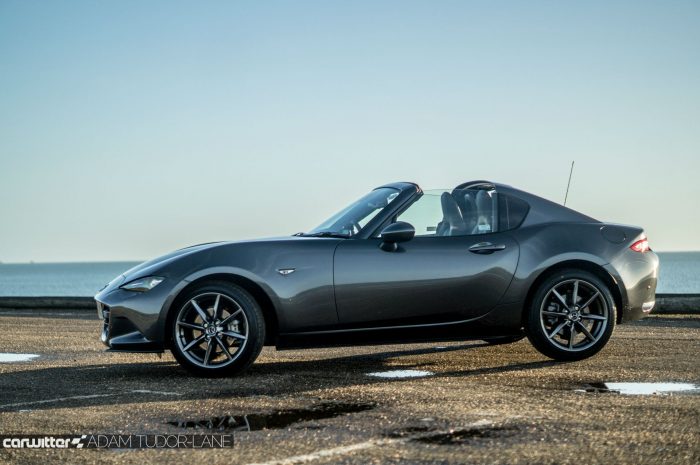 If you’re feeling flush then you could opt for one of the 160 launch editions left.

Starting at £28,995 you get Recaro sports seats, a slew of Alcantara, BBS alloys, a two tone roof, black mirror covers, a black spoiler, the safety pack and a choice of Soul Red or Machine Grey paint. 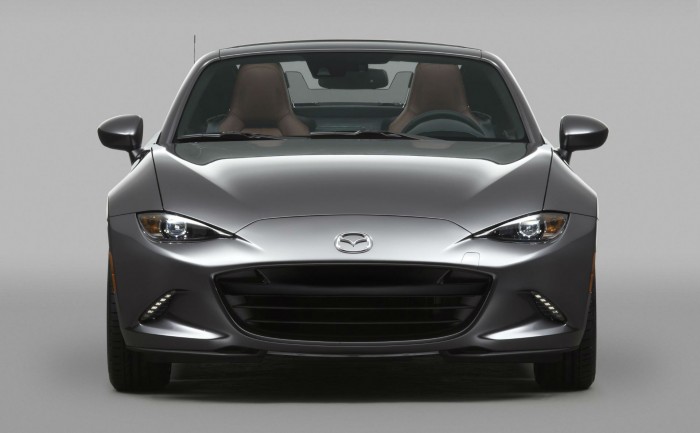 Jumping in the Sport Nav 2.0 litre we dropped the top straight away.

Now, we’ve never really been a fan per se of convertibles. They just feel a bit too exposed and dangerous.

Having the roof down in the RF feels so different. Those thick rear C pillars (albeit plastic) cocoon you and make you feel enveloped, like the MX-5 is now wrapped around you.

It’s a bit of a shame that the rear glass doesn’t stay in place, as the plastic wind guard takes up nearly the same space and it would give the little Mazda a more Targa’esque experience.

One thing we did notice however was rather a lot of wind noise coming through the top left of the roof when it was up, right behind the passenger’s left ear. The same billowing was also present on the driver’s side, but far more muted. I’m sure it would drive you mad over a long journey. 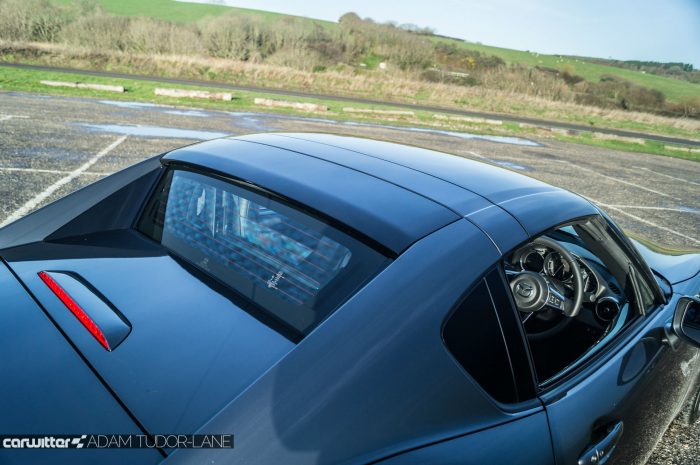 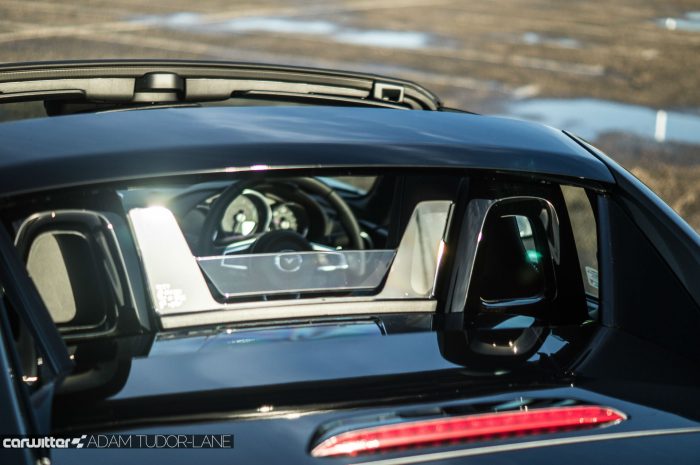 Ride wise, the 2.0 litre with its Bilstein sport suspension and strut brace felt rather stiff, even on smooth roads there was a fair amount of vibration into the cabin. The whole car seemed to dance around on rougher surfaces.

Hopping straight into the 1.5 with its ‘normal’ setup, smaller wheels and lacking a limited slip diff it was rather more solid and composed, taking our damaged road surfaces in its stride with far less shimmying and shaking.

Steering input also differs between the models, the 2.0 litre is instant in its response whereas its little brother has a slight amount of play on initial turn in. 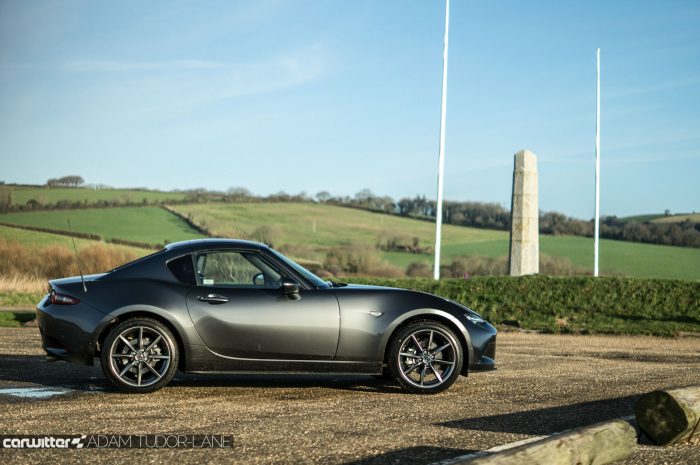 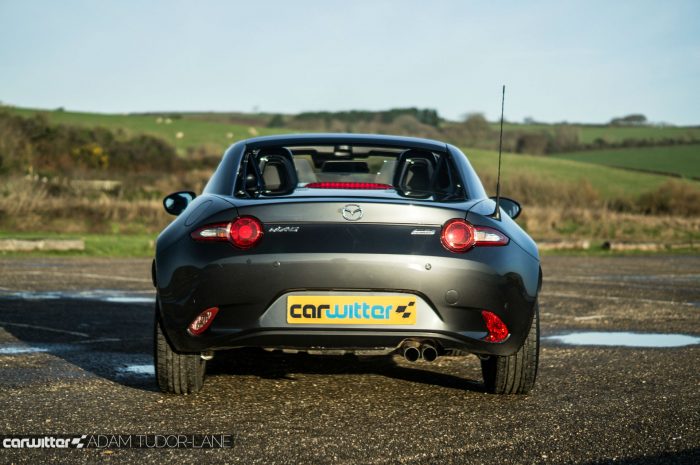 The smaller lump feels like a little terrier, it wants to go, it wants to be worked hard and you will be rewarded handsomely for doing so.

In 2.0 litre form the MX5 has longer legs, you can be lazy with it, less gear changing is required as the torque band is ultimately wider and the extra 29 BHP makes overtakes a breeze.

So, it’s entirely down to personal preference, if you lust for an engaging drivers’ car that you can wring its neck, go 1.5. If you want more of a sporty cruiser go for the 2.0 litre. 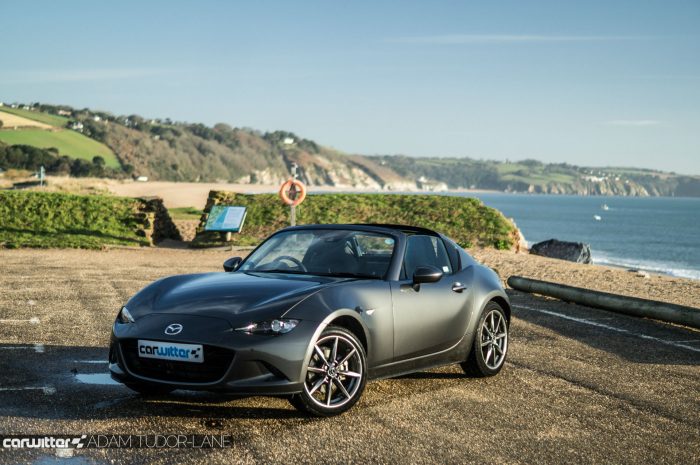 Inside the RF is exactly the same as the 2016 Mazda MX-5, bar the new roof switch.

Thankfully the roof is totally automatic, so no more unlatching. Hold the button down and it does the rest. You can only drop the top at speeds up to 6 MPH which is a shame, but at least it’s not a totally manual affair like the soft lid. 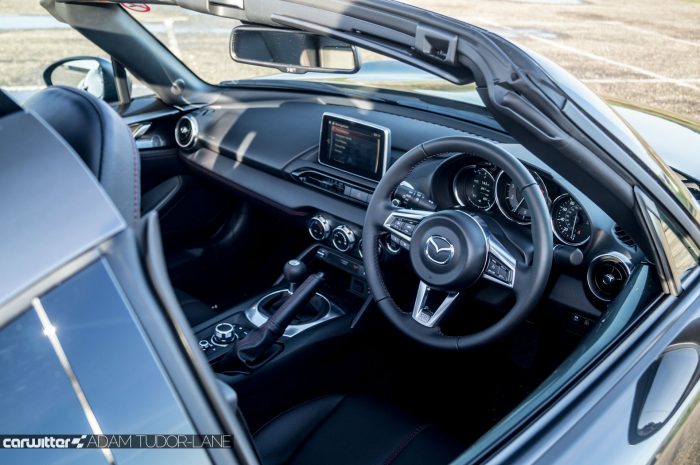 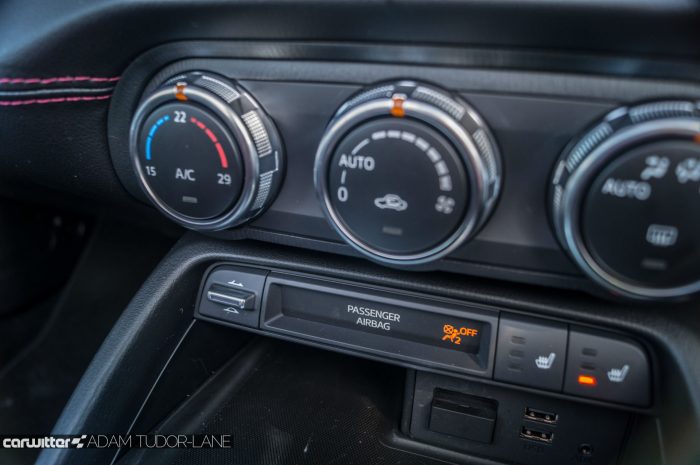 Mazda will sell its new RF on looks alone, most punters are opting for the higher-level trims with buyers also said to be holding off on purchasing an MX until this one hits showrooms.

Its coupe styling is gorgeous, yes there is a weight penalty to be had, but the minute change in the 0-60 times is negligible.

Let’s just hope they can sort out that windy passenger side. 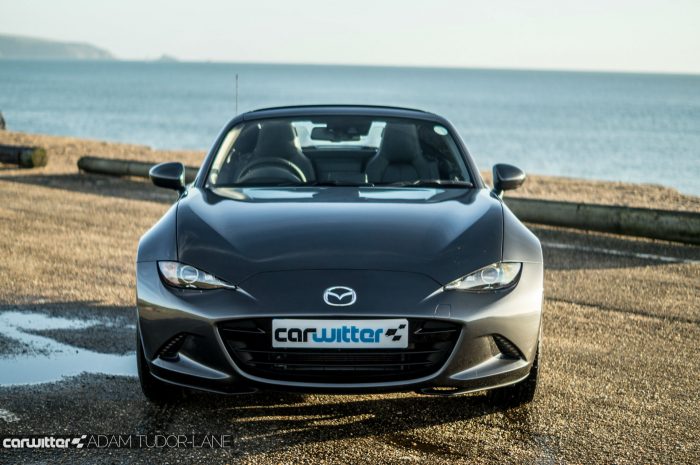 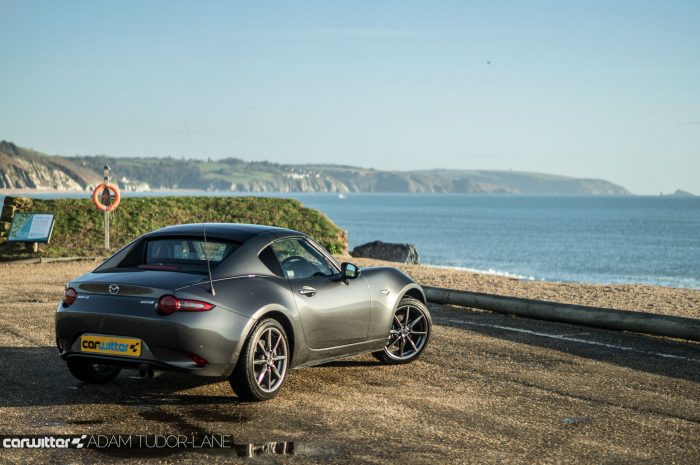