Kia’s Stinger is an odd proposition. A shot across the bows of the Germanic hoards that beat a path up and down motorways across this land. But starting at £31,995 it’s the brands most expensive offering. Ever.

Most of the press have been hammering on about the beasty V6 model, ultimately that’s going to appeal to the few. So we took out the 2.0 litre turbo model, which hits that £32k starting price in GT trim, or £35,495 for the GT-Line S model. 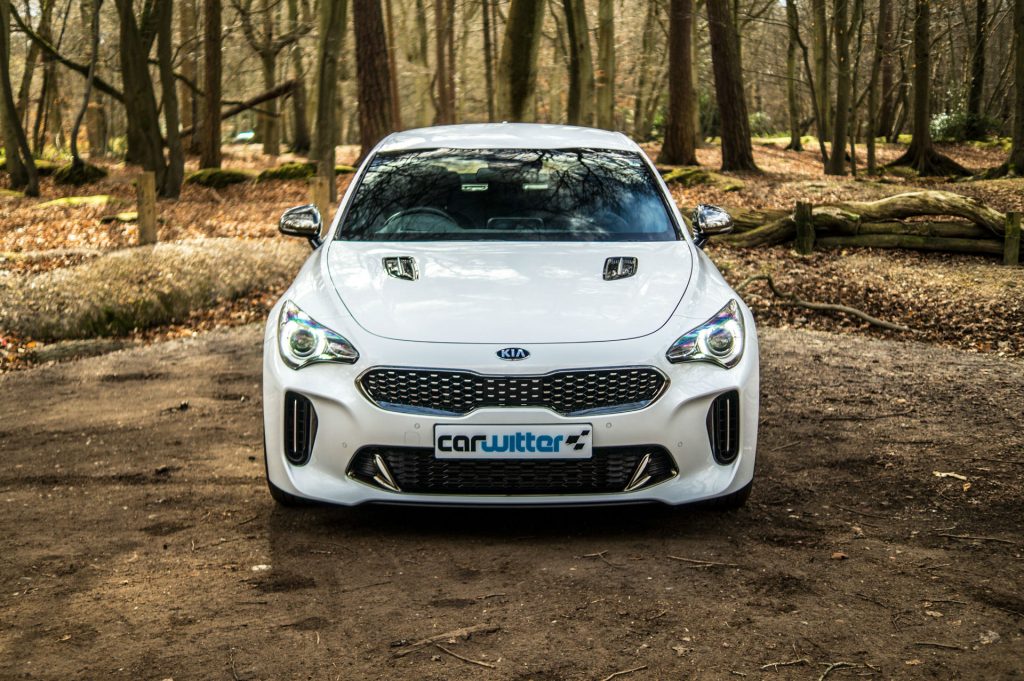 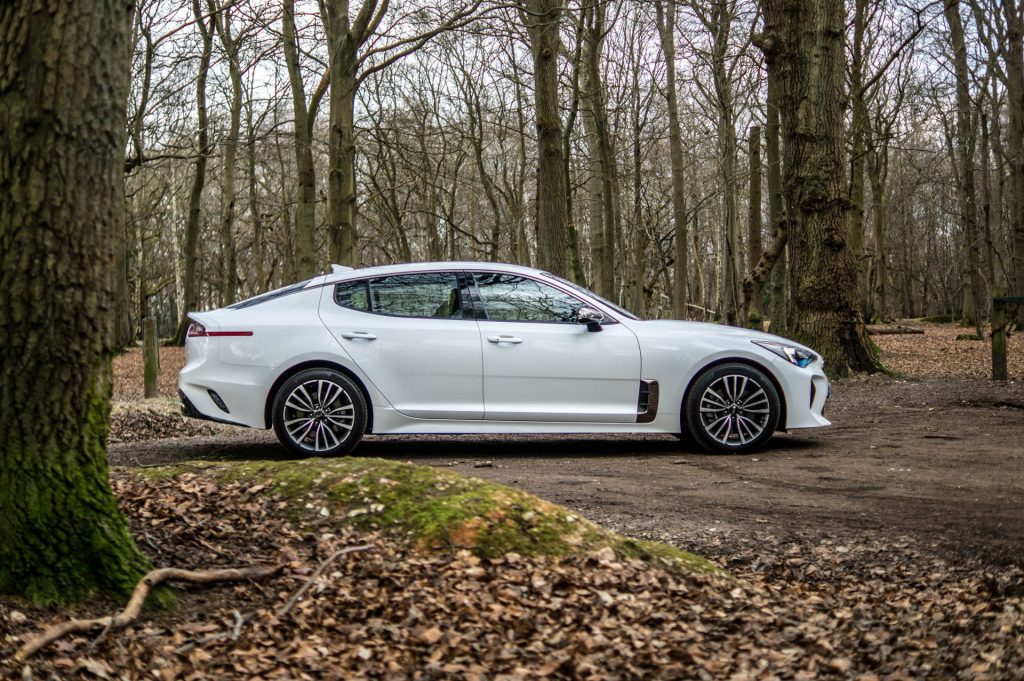 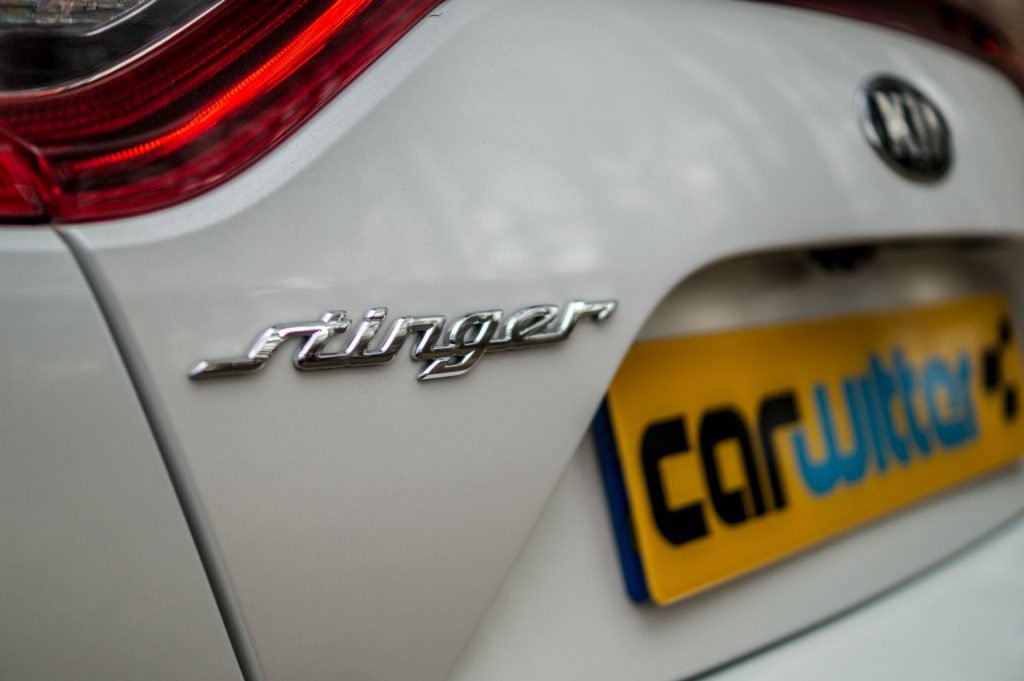 When Kia unveiled the Stinger at the 2017 NAIAS jaws dropped. It’s a complete change of pace, a breath of fresh air compared to the hum drum of everyday hatchbacks the brand are known for.

That wide tiger nose grille and bonnet vents give it means and purpose. It has a shooting break-esque profile to it, comparable to the Audi A7 but all the more appealing for its differences.

Those rear lamps have a Maserati feel to them…the best part though is the fact that no matter what engine/trim combo you select, the Stinger remains the same. Bumpers don’t change, vents stay in place, so you’re not left with a half measures affair. It’s full fat all the way.

The things that do change, are the alloys, headlights (to LED) and the panoramic roof. All fairly innocuous to the man on the street. 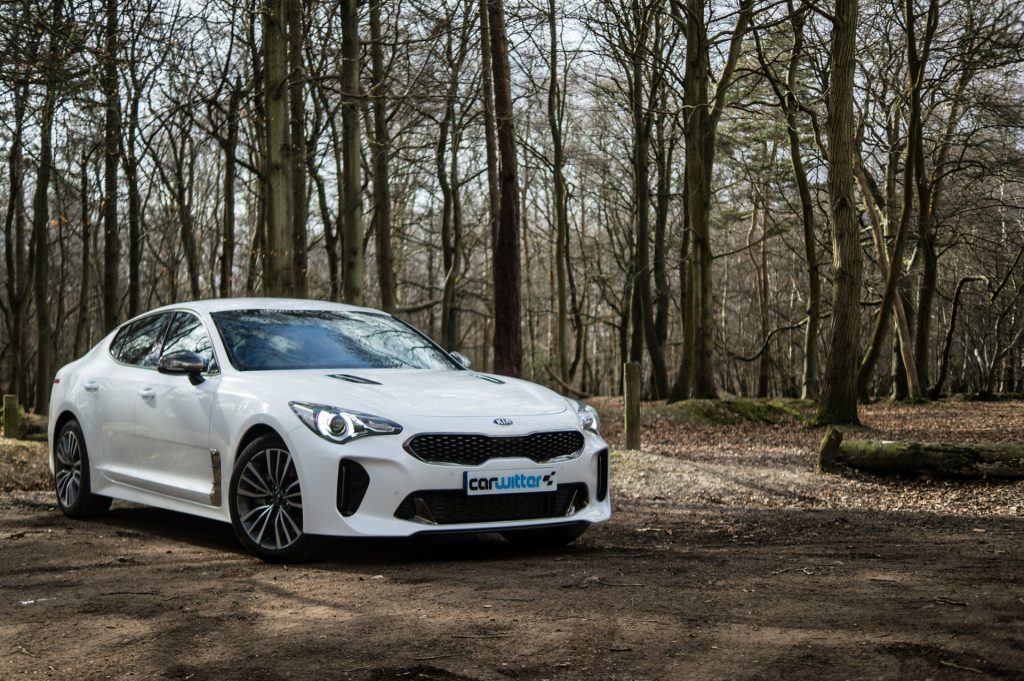 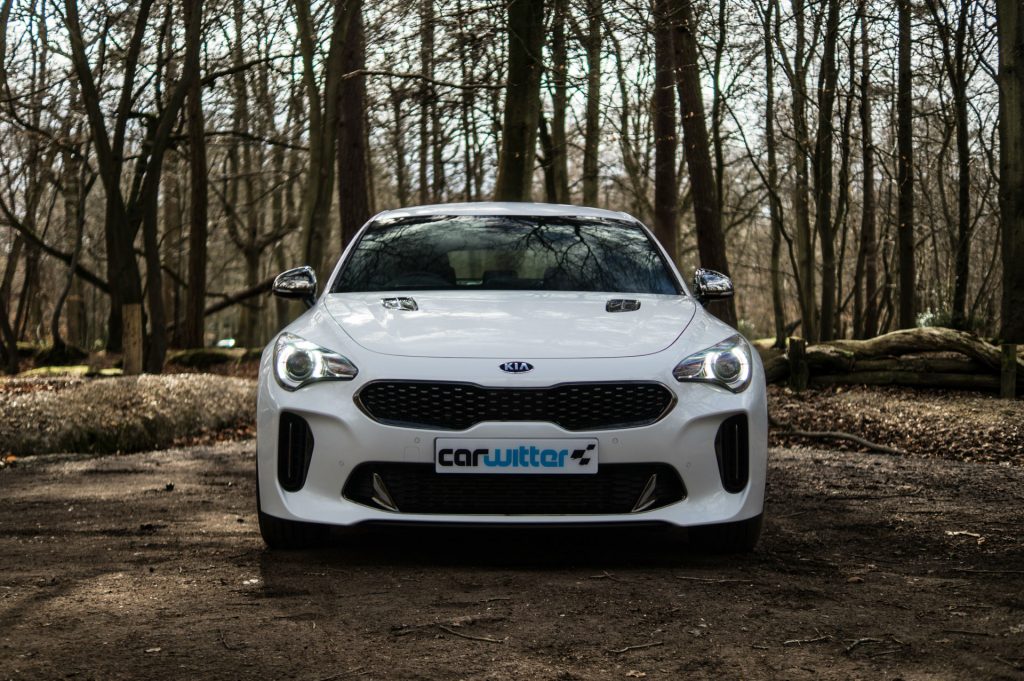 It might not be the V6, but the 2.0 litre turbo still pumps out 244 BHP and 353 Nm of torque. That’s punchy enough for the majority of drivers, and gives this Stinger a 0-60 time of 5.8 seconds, that’s hot hatch territory.

So it’s no slouch, and it feels as quick as you’d expect. It even has the same tail happy abilities as its bigger V6 brother.

It stays well planted for the majority of the time, but can be easily led into drift mode on slippy roads. In that respect it feels more engaging than its German rivals, you have to pay attention as you would in a Jag. 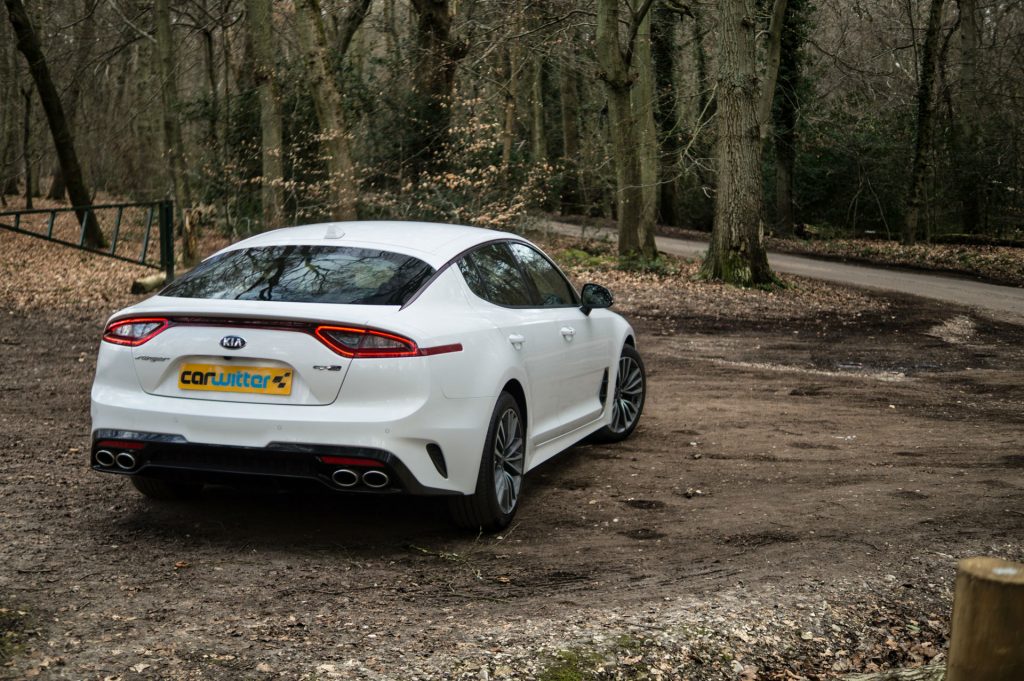 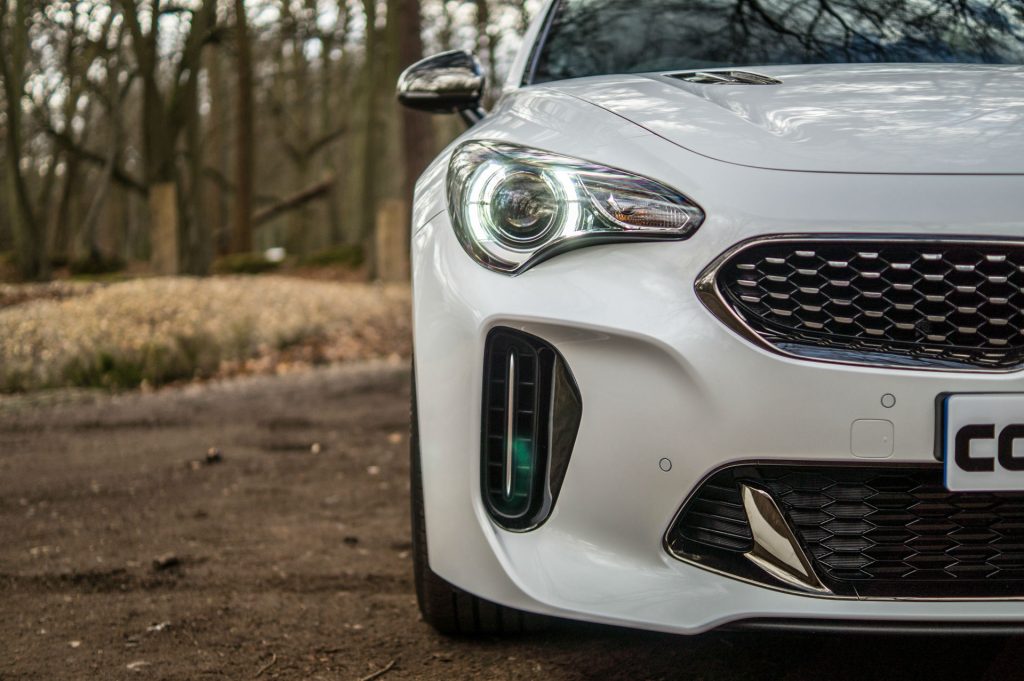 2.0 litres doesn’t feel breathless either, it’s an engine that likes to rev pulling well at any speed, especially when you’ve got the Stinger set to ‘sport’ mode; which shortens the gearing and weights up the steering.

You can also use the paddles to change up and down, but sadly the Kia takes back control after a few seconds reverting into auto. Rather annoying. So if you’re after a ‘lively’ drive you’ll be leaving the Stinger in ‘Sport’ 24/7/365.

Not being the GT S you forgo the fancy adaptive suspension. The rather portly Stinger is well controlled through more demanding corners. Matched with a slightly lighter feeling front end over the V6 and the steering becomes a tad crisper and keener to turn in.

That tight body control does come at the detriment to comfort. Ride is suitably stiff, with thuds from lumps and bumps making their presence felt in the cabin. It’s not rock solid, but equally it’s not a comfy cruiser, for that you will need the adaptive suspension which fares far better in terms of ride. 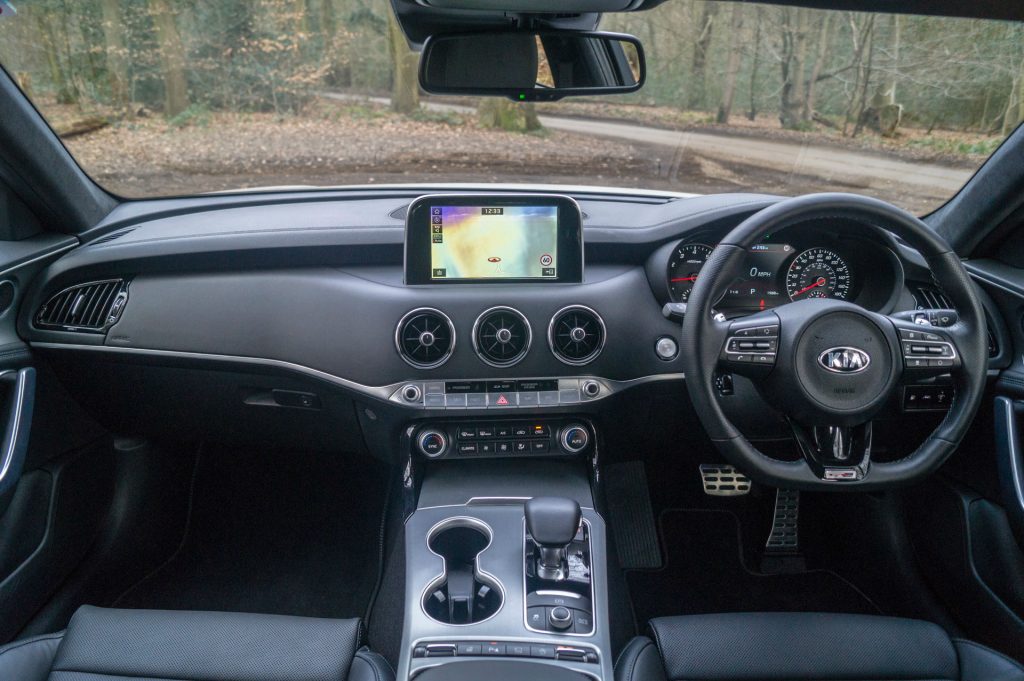 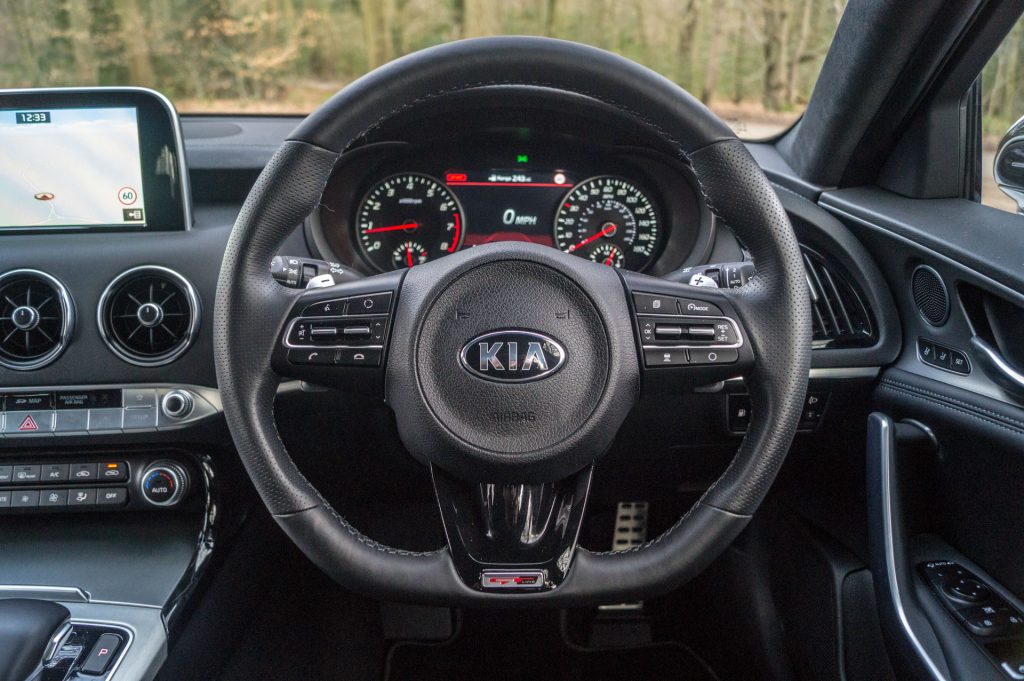 Jumping inside you’ll find a suitably minimalist layout. The air vents are mounted low in the centre console with the infotainment screen sprouting from the dash. Its rounded edges make it look a little old fashioned, along with the chunky surround.

Quality is the highest I’ve ever seen in a Kia, and so it should be at this price. Whilst all the plastics are nice to the touch it’s just a tad behind the likes of Audi and BMW, which will be noticeable to the seasoned Germanophiles amongst us.

There’s still that faux elephant skin effect on the steering wheel airbag…which is rather 90’s these days. 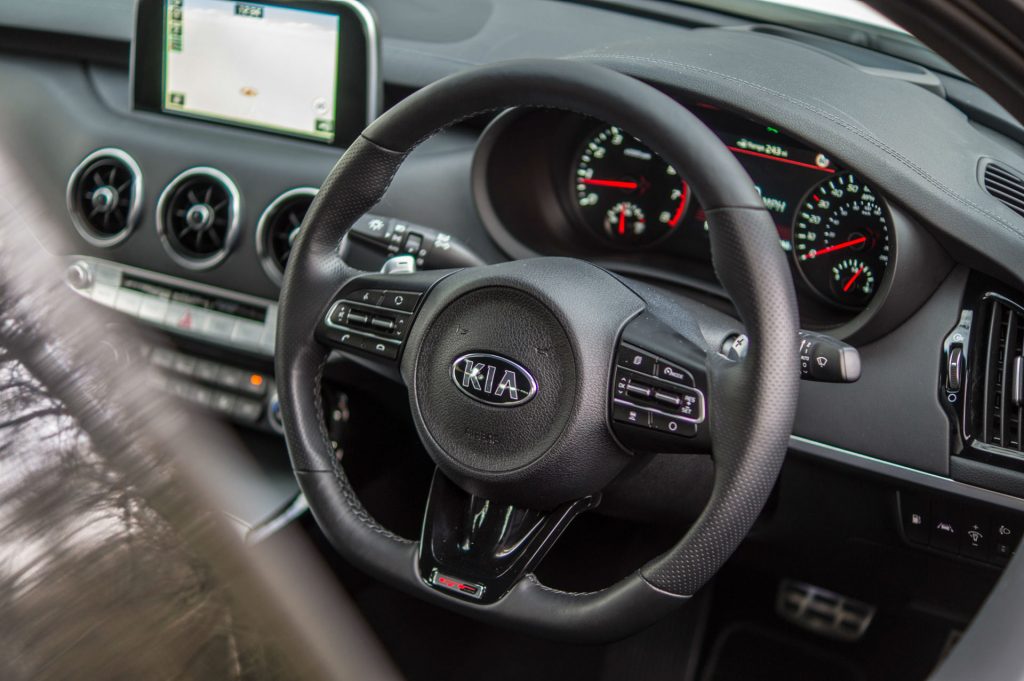 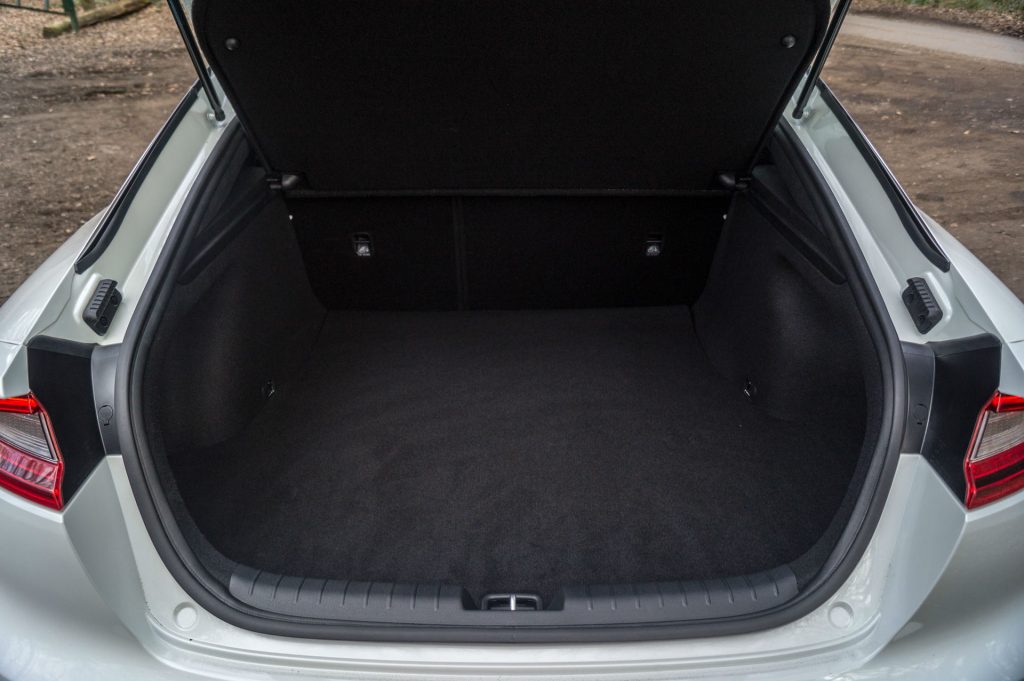 Look above you and the headlining is gorgeous, super soft strokeable Alcantara makes you feel cocooned in this mammoth saloon.

Head room at the rear is a squeeze, you can blame the falling roofline on that. Leg room is however well looked after with lots of space between your knees and the backrest.

Boot space measures in at 406 litres, which is spacious enough for a set of golf clubs or a couple of large cases, just be wary of the narrower than normal entry. 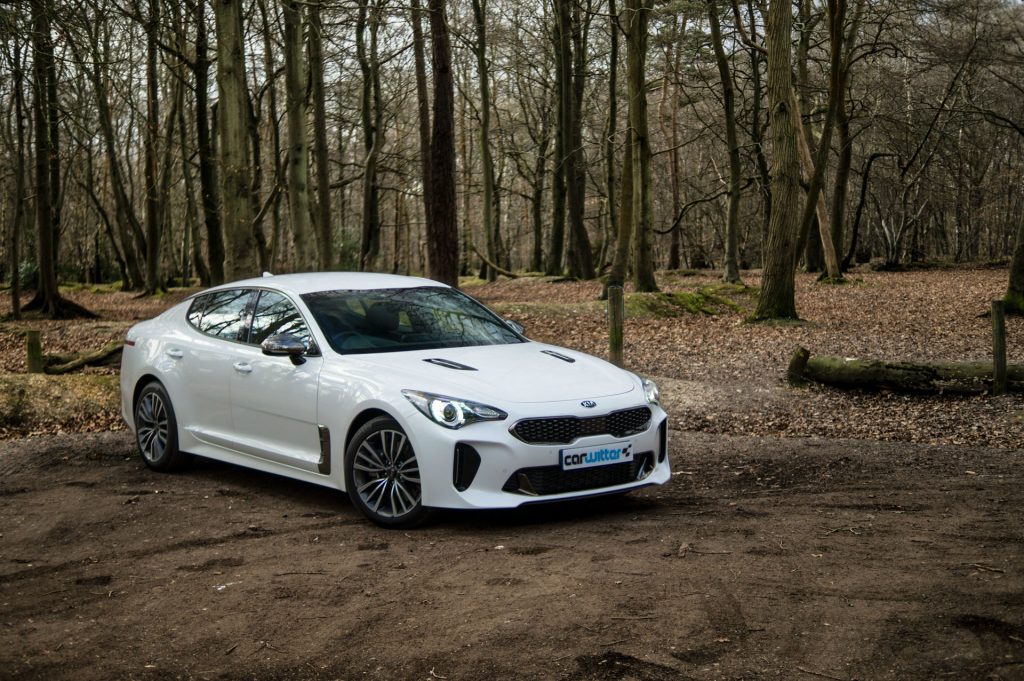 We like different here on Carwitter. The Kia Stinger is different, therefore we love it.

Ok so the interior quality may not be quite there yet, but just gaze at that exterior. Would you rather that or a run of the mill Audi A5 Sportback?!

If you have no soul and are a moronic sheep following the crowd then probably. But if you’re brave enough to not press that Audi ‘order’ button when your next company car choice comes around, go and try a Stinger. 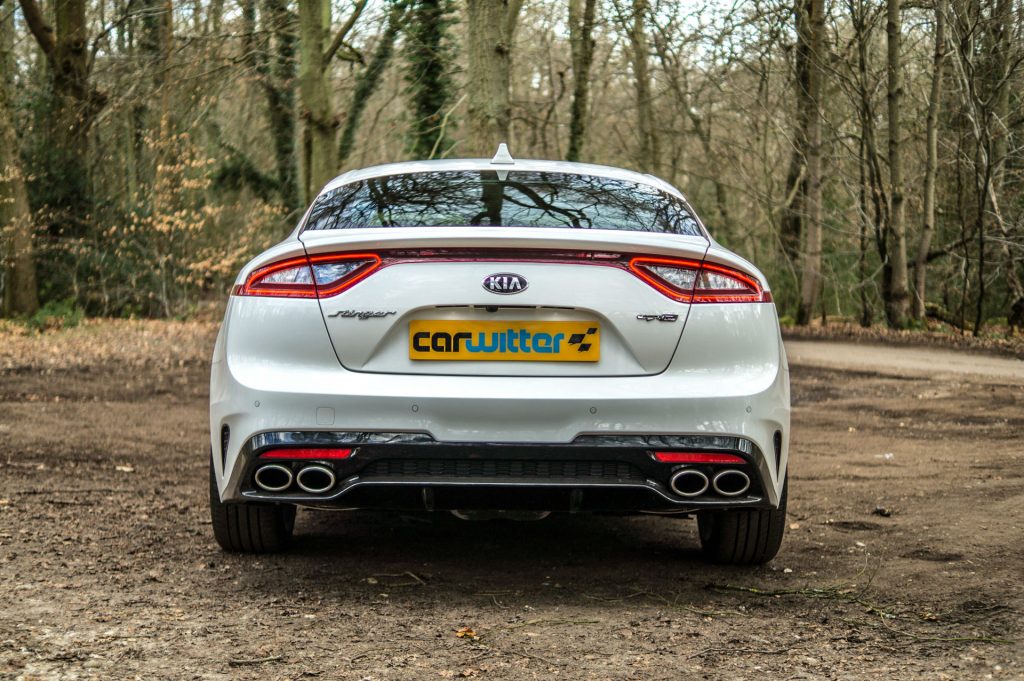 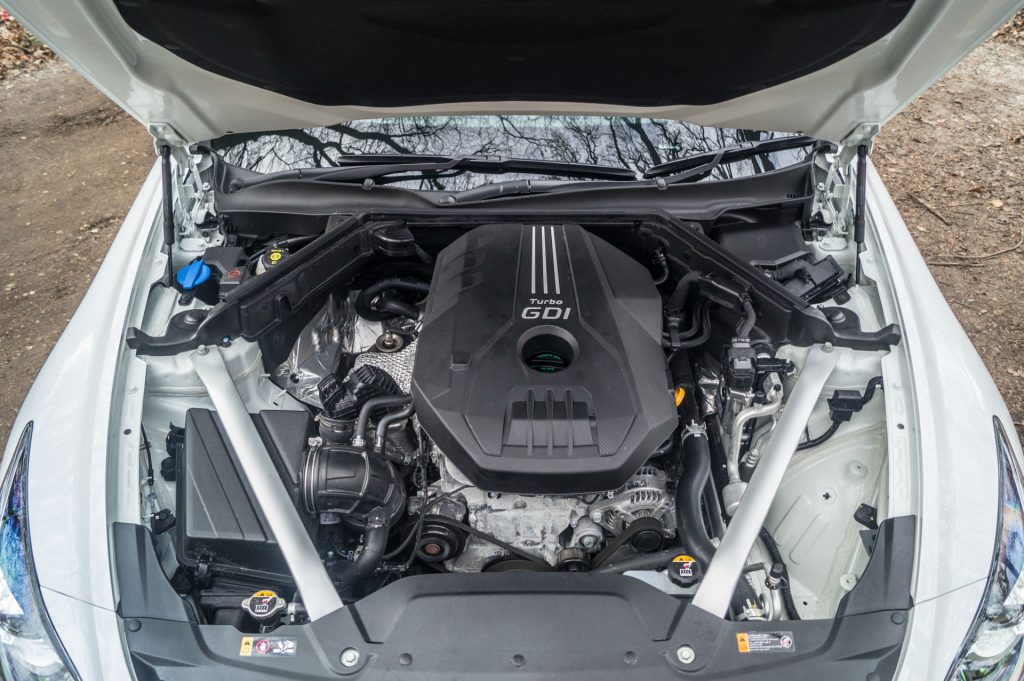 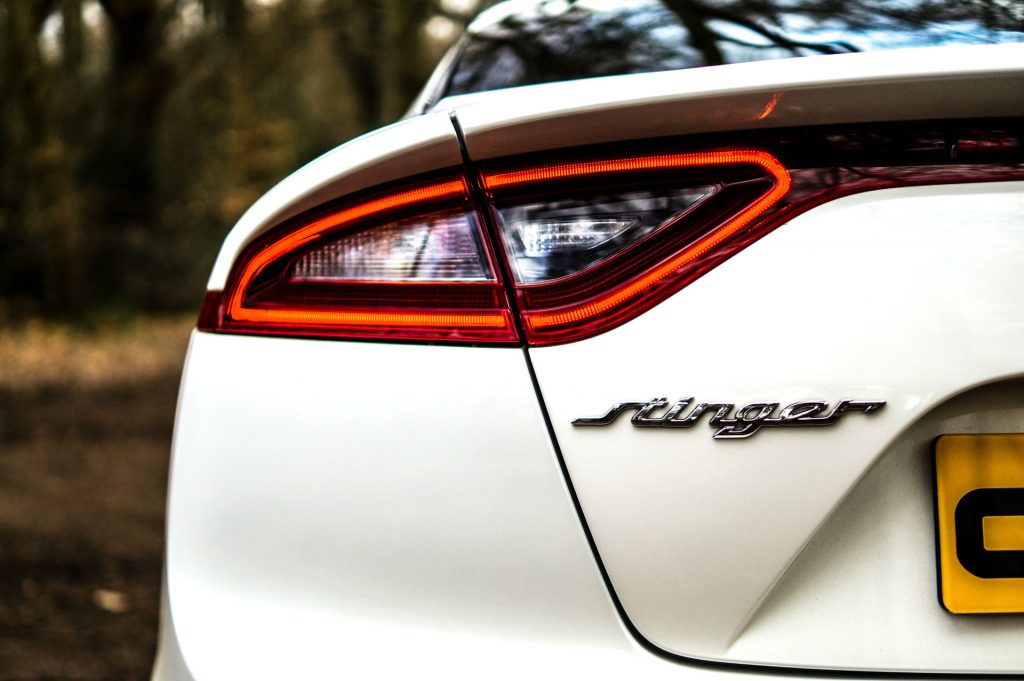 Changing the look of your car, with wrapping

Old School Hot Hatches – Where Are They Now?