About 18 months ago I had the chance to drive some great classic cars on the Dales Dash rally with Great Escape Classic Car Hire so when the opportunity arose to help Great Escape trial a new route for their Welsh Borders rally, I jumped at the chance.

The basic premise of a Great Escape rally is that you get to drive a number of classic cars on a pre planned route.

The days are meticulously organised with detailed maps provided which break the day in to stages where you stop and switch to your next car, there are two drivers to a car and the driving is shared on each stage.

Starting near Redditch, the route took us west in to Wales and then north along some gloriously twisty Welsh roads before heading east back to the Midlands.

The roads had all been carefully chosen and were ideal for the fantastic cars we drove over the course of the day. 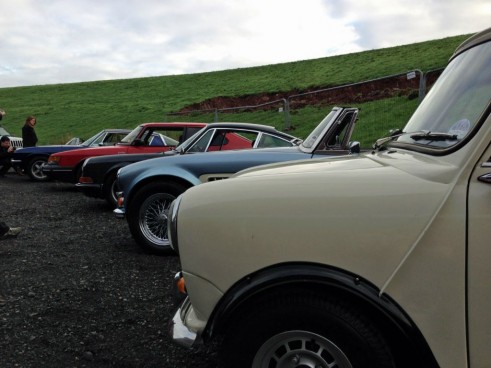 When I booked the day I wasn’t sure what the car line up would be but when I saw the final list I could barely contain my excitement as I was going to drive one of my favourite all time cars, a Porsche 911.

In addition to the Porsche there was a V12 Jaguar E-Type, a HMC Healy, a Jensen Interceptor, a Mini Cooper replica and a Saab 900 Turbo. 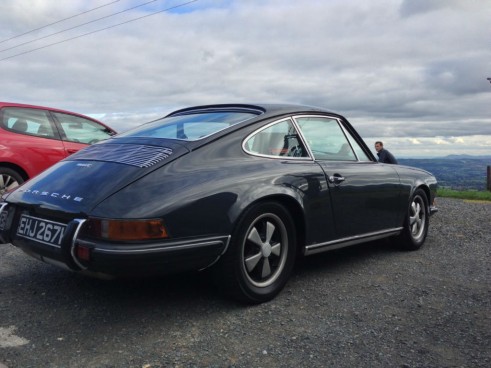 The day started cool and crisp but with greasy roads following rain the night before.

Given its reputation for being a little tail happy, I was hoping I wouldn’t be in the 911 first, but sure enough, I was.

Walking around the beautiful 1969 911 2.2T, I was struck by how small it was compared to modern cars but once I’d lowered myself in to the car I found myself sitting comfortably in the snug cabin.

The seating position and controls feel unusual at first with the pedals slightly offset and the accelerator being floor mounted while the brake and clutch pedals almost feel like you’re pushing them upwards.

As I turned the key and pumped the throttle the Porsche fired in to life and I was about to drive something I’ve always wanted to drive, as I eased the car out on to the open road, I knew I’d be in for a treat.

The hollow howl from the engine is quite a unique noise and while it isn’t outright fast you get a great sensation of speed from sitting so low and the view out over the bonnet is wonderful.

My stint in the car was fun but best described as ‘steady’.  However, there was a bit more Porsche driving to come later in the day…more on that afterwards. 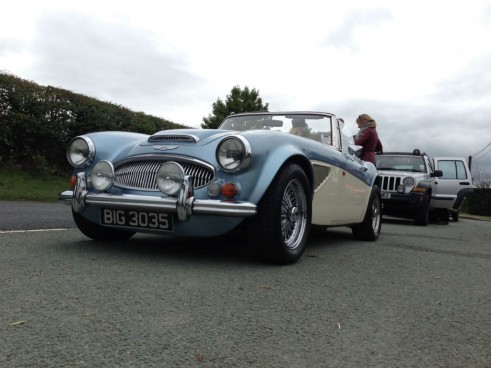 By the time we reached our first car swap the roads were drying nicely and the weather was looking good for the day.

It was now on to the HMC Healy.

This wasn’t a car that I knew much about but is essentially a recreation built in the 1990s with a 3.9 V8 engine.

As a ‘modern’ car it has power steering and a generally more up to date feel than some of the other cars driven on the day.

I have to admit that for the first few miles I didn’t gel with the Healy at all, I found the steering too light and it felt wallowy after the 911.

After a few miles though I started to appreciate the glorious engine (and noise) and got a bit more comfortable with the ride and handling and started to enjoy the experience.

As a relaxed (but very fast) crusier the Healy is a great car and ideal for a leisurely yet brisk drive through the countryside. 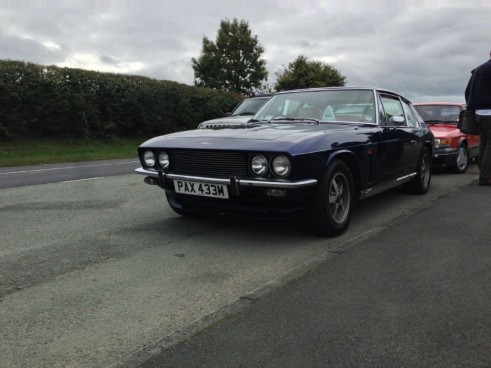 After what turned in to an enjoyable cruise in the Healy it was time to break for lunch, all organised as part of the rally.

Next up was the Jensen, the Interceptor was car I’d driven before and one I was looking forward to being in again.

The stage that I happened to have the Jensen for was a beautiful piece of road heading north through Wales but wasn’t best suited to the lazy handling characteristics of the Interceptor, nevertheless just listening to the glorious rumble from the engine was a pleasure.

This really is a car worth experiencing, especially if you want to pretend that you’re a 70s playboy cruising to your yacht in the south of France. 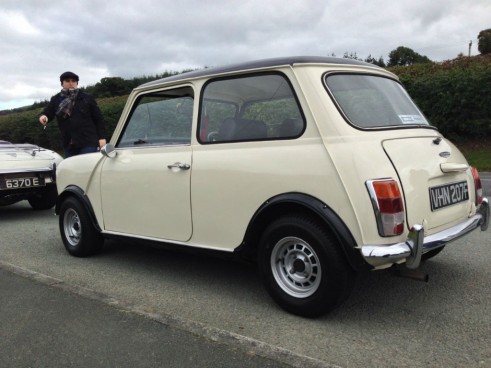 Next up was the Mini.  Now, I must admit that Minis are not cars that I’ve ever really been too taken with, I don’t hate them but never understood the hype surrounding them.

Squeezing myself in to the retro bucket seats I managed to get comfortable and was ready for my first Mini experience.

Despite never having driven one, I felt instantly comfortable in the Mini and largely put this down to the similarities with my 106 Rallye (unassisted steering, no ABS, relatively low power, go-kart like handling).

Before I knew it, I was throwing the Mini in to corners and doing my very best to maintain momentum, switching through the 4 gears the Mini was noisy and harsh but was also very willing and despite its small engine, never felt underpowered.

After driving the Mini, I am completely converted; I still don’t think I’d buy one myself but absolutely get the attraction.

The Mini is old school fun at its best and I couldn’t wipe the smile off my face throughout the drive. 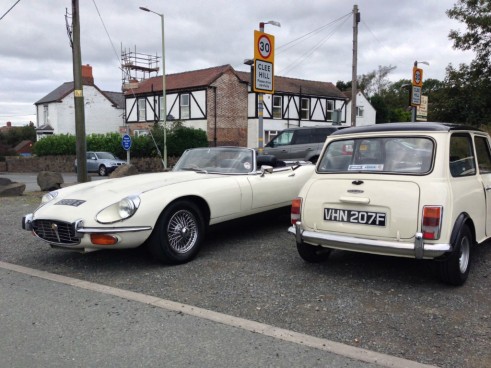 Switching from the Mini to the E-type was perhaps the biggest contrast of the day.

Even by today’s standards, the E-type feels like a ‘big’ car with its enormous bonnet, it really is quite a unique view from the driving seat.

Last year I drove a 6 cylinder E-type and loved it, so was rather looking forward to something with double the cylinders, and it didn’t disappoint.

The sheer power of the E-type is a wonderful experience, just point it at the horizon, put your foot down and watch the speedo rise…no fuss, no drama, just an instant and seemingly never ending surge of power.

Despite the power and size, the E-type is an easy car to drive once you get used to the controls and it was a real pleasure to pilot through the countryside. 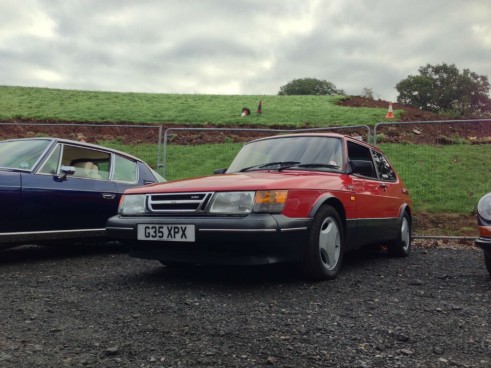 Last up for my co-driver and I was a car we’d both been looking forward to all day, the 80s tastic Saab 900 Turbo.

Great Escape’s gleaming red Saab 900 has over 220k miles on the clock but you could easily mistake it for a car that had travelled less than half that.

These cars were clearly built to last and the Saab felt amazingly solid.

We both felt right at home in the Saab and it genuinely felt like a car you could drive every day. 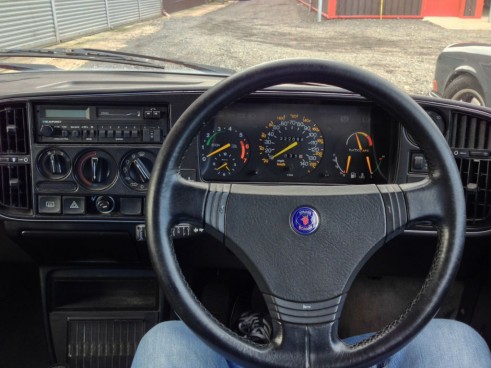 The brakes, steering and throttle were all responsive and easy to use and the turbo gives a very useable shove in the mid-range.

For a car from the 1980s it felt fast even by today’s standards and would give plenty of modern machinery a run for its money.

It also happens to be one of the cheapest cars on the fleet to hire and I can’t recommend it enough.

In fact, I’ve spent quite a bit of time looking at them on ebay since that drive…(it also has to be one of the only cars that has ever successfully pulled off 3 spoke alloys). 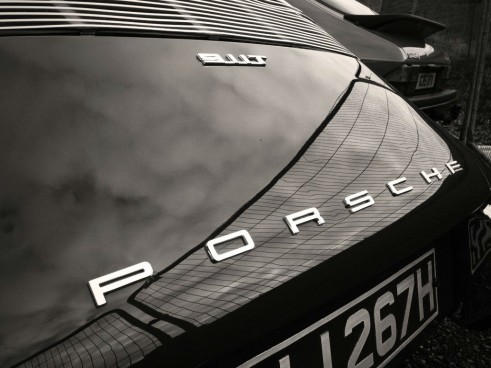 Then came the bonus part of the day, as we finished a bit early and people started to leave, I asked if I could take the Porsche for a quick final spin.

By this time the roads had dried and it was a beautiful autumn evening and having driven classics all day, I was now much more in tune with old brakes and handling etc.

What followed was one of the best drives of my life in the 911, one of those memorable drives where everything came together and I felt like I really clicked with the car.

I loved every minute of snicking between 3rd and 4th on a flowing road while listening to the air cooled engine howl away behind my ears, the Porsche cornered beautifully but all the while remained composed with a comfortable ride and was just a fantastic place to be.

It was the perfect way to end a fantastic day. 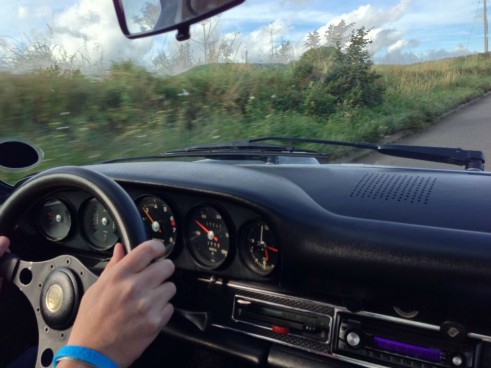 So, Great Escape once again delivered a brilliant day with some very well looked after and useable every day classics which in my experience are superbly reliable thanks to the extensive maintenance that the cars receive.

All of the cars can be hired individually but the rallies are a great opportunity to trial a few cars during the course of the day and having now done two of these events, I can highly recommend them!

You can check out all the cars and events Great Escape Classic Car Hire have to offer here.