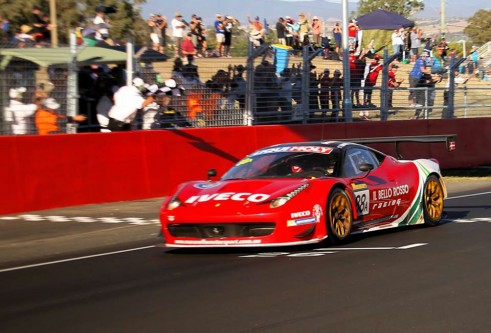 The Maranello Ferrari squad came out on top after an exciting Bathurst 12 hours came to an end on Sunday.

As the chequered flag fell Lowndes’s Ferrari 458 was just 0.413 seconds clear of the charging Mercedes – the closest finish in the event’s history.

The five-time Bathurst 1000 winner had entered the last 12 minutes of the race at the head of the field as a late caution bunched the pack up.

Buhk was able to get the HTP Motorsport car alongside Lowndes on the run up to Griffins Bend with just five minutes to go – but the former V8 supercar champion held on to the inside line and the lead.

But the race wasn’t over yet, as Buhk was again able to close the gap as the pair raced onto the last lap.

Lowndes was able to hold off the hard charging German and celebrate a sixth win on the mountain with team mates Mika Salo, Peter Edwards and John Bowe.

The win was given extra emotion as the Maranello squad dedicated the precious win to long-time team mate Allan Simonsen, who died at Le Mans in 2013.

The close fought finish was a world away from the trouble suffered by the HTP squad early in the race.

The trio of Buhk, Thomas Jaeger and Harold Primat were struck with broken suspension after a collision with the Nismo GTR, losing them two laps.

After an astonishing charge for almost ten hours they were unable to complete a monster comeback finishing just four-tenths shy of an astonishing victory.

Podium positions were rounded off by the Erebus Motorsport SLS peddled by new Erebus V8 racer Will Davison alongside Jack LeBrocq and Greg Crick.

The trio had survived an early brush with a kangaroo and managed to hold off a hard-charging Shane van-Gisbergen to seal the final podium place.

They weren’t the only ones to suffer at the hands of the local wildlife, veteran racer Peter Kox was forced to pull the bonnet off his own Lamborghini Gallardo as he drove onto con rod straight after the bodywork had been damage by a collision with a ‘roo’.

But despite his efforts limping the stricken Lambo back to the pits his day was done after just the fifth lap. LeBrocq would escape hitting the same creature with just a broken splitter.

The No. 22 Billington Seat Leon Supercopa won in Class D and the No. 96 Fiat Abarth 500 finished victorious in Class F.