This is the Ferrari 458 Speciale and the headlines are thus: 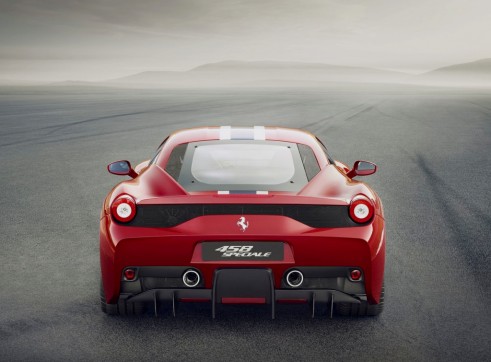 A dry weight of 1290 kilos over the base cars 1400 or so and something called SSC (Side slip angle control) which essentially invigilates power slides and eases the car toward a target angle via torque vectoring.

It will undoubtedly absolutely rinse 9/10 roads you contend with it. The 650BHP spec 12C press car will probably see some solid fieldwork alongside the Speciale in the coming 6 months too..

Blistering performance is a given with cars leaving the gates at Maranello these days. All offerings carrying the 458 styling language have also carried its fast steering rack, lightning quick throttle response, indubitable agility but also it is reported, have somewhat a “driver along for the ride” air about them rather than a feeling of being the focal point of the formulae. Now more than ever then this could be an issue as the this is a line of Ferraris greatest drivers cars. 355 Challenge, 360 CS, F430 Scud’ and now the 458 Speciale are part of a seldom available breed of Ferrari’s ultimate track hugging road munching grin inducing spartan racers. To get ones hands on a 360 Challenge nowadays it is the norm to part with around £100,000. This is a classic in every sense of the word. This bloodline endures and is to be more special, if that is possible, than the “standard cars”. I worry for how distinguished and deserving the Speciale will feel next to its analogue predecessors as these cars in particular are not a game of numbers. Time will tell!

I for one am more a lover of the 90’s to early 2000’s Ferrari era of unconditional beauty and class rather than todays swept back LED active aero, very much function over form as long as its striking approach. The Speciale takes that modern ethos to a whole different more difficult to swallow level… but thats just me!

The Speciale makes its first outing at the 2013 IAA Frankfurt motor show in September.

What does the world think of the hard charger spec 458? Has Ferrari excelled itself? Or is it nothing Speciale….?

Facelift Vauxhall Insignia on the way

New ways to get Carwitter!