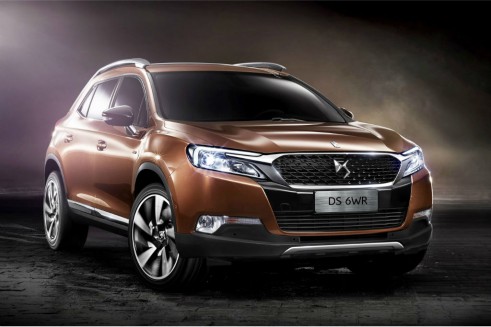 Citroen will unveil the latest addition to it’s premium DS range at the Beijing Motor Show – an SUV called the 6WR.

The SUV, which is badged as a DS rather than a Citroen, is descended from last year’s Wild Rubis concept, which was showcased at the Shanghai Motor Show.

In this single image released in the run up to the show we can see the grille from the concept, which merges into the headlamps, has been carried over.

Behind that it is standard small SUV fare with chrome detailing along the doors and mirrors designed to accentuate the premium nature of the car.

Citroen say the chrome has been carried around to the back with the “wraparound” rear lights set into more metal and ‘DS’ lettering added to the middle.

The new SUV will be powered by one of two versions of Citroen’s turbocharged 1.6litre petrol unit, producing either 160 or 200bhp while mated to a six-speed auto ‘box.

Citroen say the 6WR will go on sale in China by the end of the year with other countries to get locally made models at some point.

Strakka forced to withdraw from Silverstone and Spa