Once again MoneySuperMarket sent us a rather interesting invite, to drive the world’s first mind-controlled electric car. It’s all in aid of celebrating intelligent drivers through the use of telematics, the safer you drive the lower your car insurance. Simple! 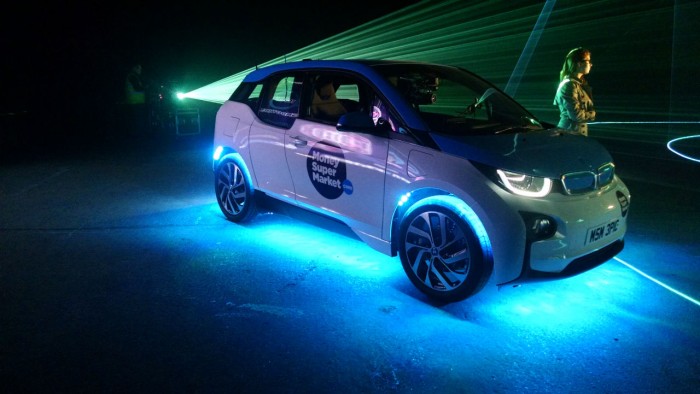 The challenge was to drive a vehicle around a test track using an electroencephalogram (EEG) headset. Sounds easy enough…it wasn’t.

To be able to perform this feat you have to train your brain for 2 hours…2 hours of just thinking of lefts and rights! Well if Carol Vorderman can do it, surely I can! 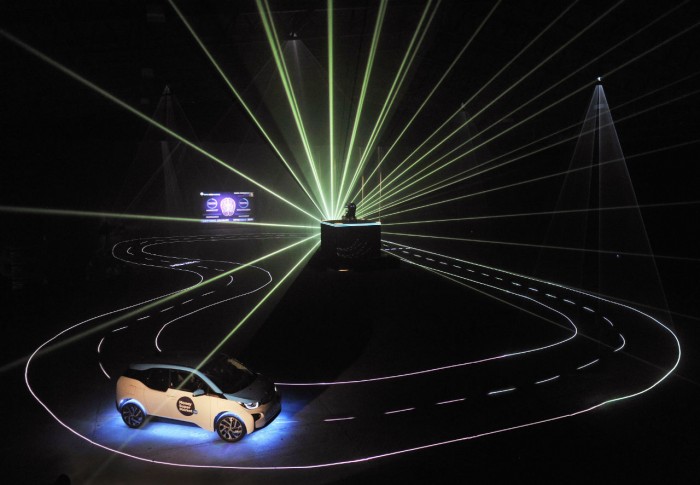 Turns out it’s much harder than you think (get it?). The EEG headsets monitor and record your brain patterns. In the software you press a button that says ‘Right’ and then for 15 seconds or so it records what’s going on in your head. 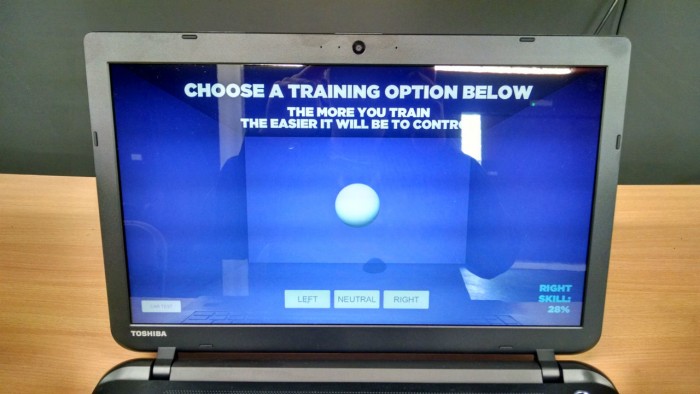 Basically you can be thinking/doing anything and it records that…so you don’t actually have to be thinking left and right.

Once you have a set of patterns nailed you can then move the on screen floating ball either left or right at will.

After about 45 mins of trying to train the software I wasn’t really getting anywhere fast. Thinking different things, tensing muscles, moving one side of my body…nothing seemed to stick and be a reliable pattern. 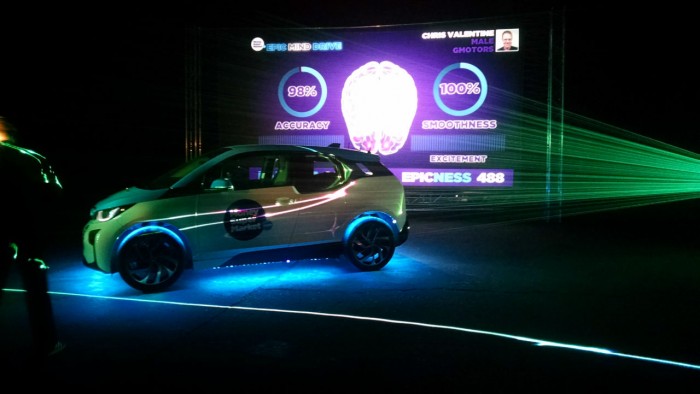 That was until I was advised to give really physical motions a go, and that such a large amount of movement would give better responses.

So I developed a bit of an air grab, a lean and a head tilt. All these combined seemed to do the trick…apart from looking like I was having a seizure all was going well. 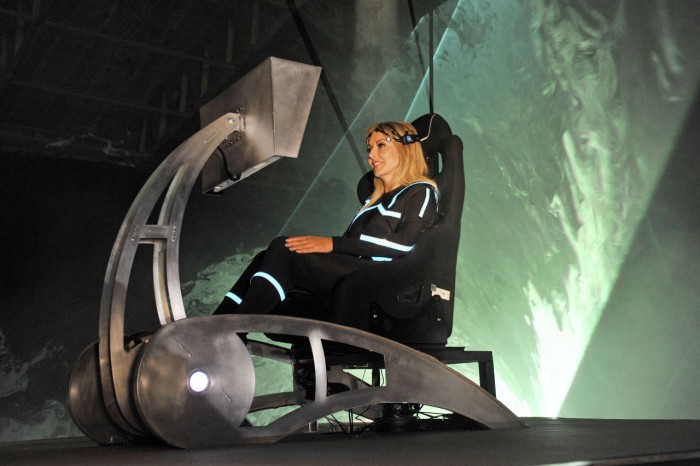 With that I was quickly whisked into the pitch black hanger where the mind control car awaited.

This wasn’t any ordinary remote control car. This was a full sized car. Rigged with robotics, telematics, Wi-Fi and a plethora of safety systems in case it all went a bit Pete Tong. 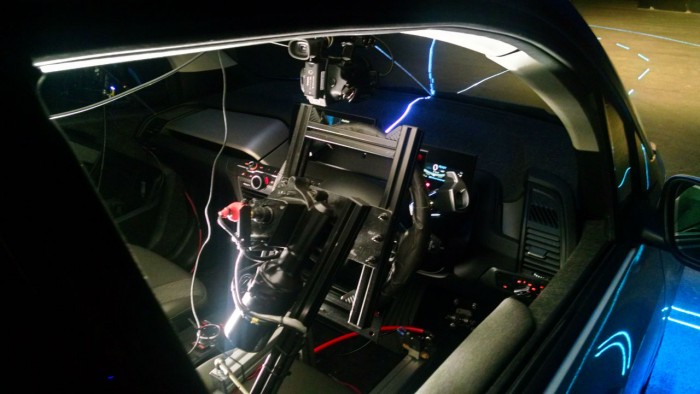 It wasn’t any ordinary race track either, it was made up of lasers and once your eyes adjusted to the gloomy darkness it was like being on the set of Tron!

Climbing up to the hot seat in the middle of the track everything was adjusted and calibrated ready for action.

With a nod of my head the car that sat to the right of me started to move slowly forward…approaching the first turn I pitch and tilt to the left and hold position. Behind the live feed from the car that sits in front of my face I can see the giant scoreboard which registers a left brain input. This thing actually works?! 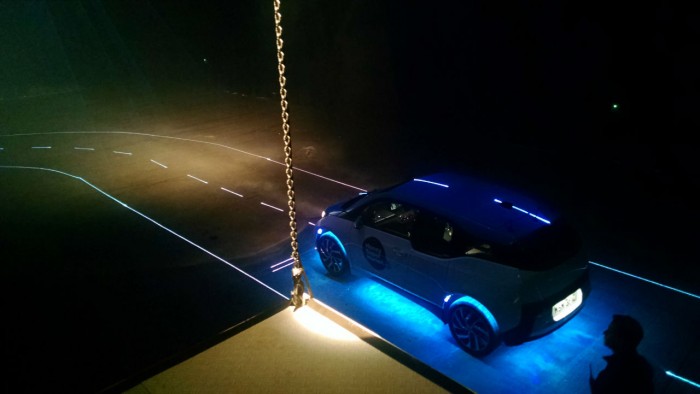 The car starts to slowly turn left, when just the right amount of lock is given I settle back into the seat and relax to register a ‘neutral’ position which makes the cars wheels straighten.

Even at 5 MPH the next corner is fast approaching, once again I air grab and head tilt to the left, fully over the edge of the bucket seat I’m perched in.

This time it doesn’t register, I repeat the process and once again nothing…with the car heading toward a concrete barrier the cars brakes are slammed on and control is taken away from me. Damn. 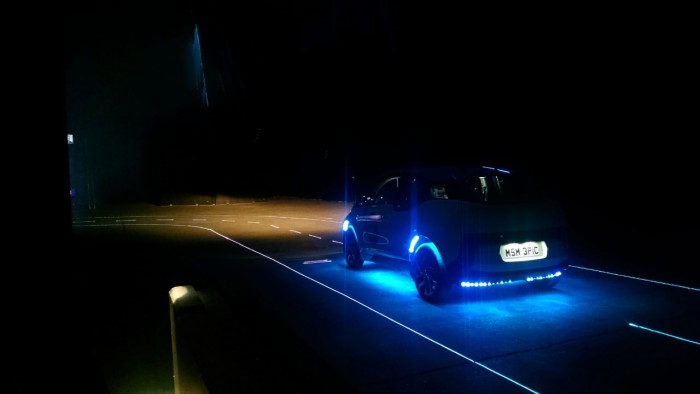 Once back on track I get the all clear that I am in control once again. Head tilt forward and we are off.

The next turn is a right hander, leaning right I catch a glimpse of the scoreboard once again. Yes. A right turn has been picked up.

Holding it for a few seconds the car makes the turn just fine, and it’s then a quick left to make it round to the next corner. 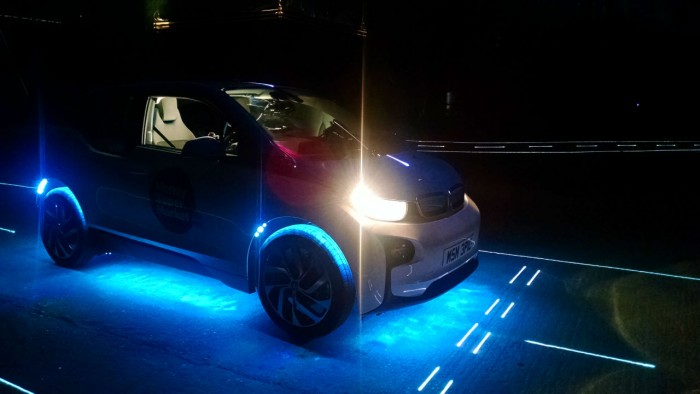 After nearly running over a few crew members and narrowly avoiding crashing into some concrete blocks I kind of got the hang of it. I stayed pretty much to the lines of the track, and even when things were going wrong and the safety teams were going to take control I still managed to save it on a few occasions!

It was hard work I’m not going to lie, it was far more physical than you would imagine for a brain controlled device to be. Sci-Fi makes it out as though you simply think and it happens. That’s not the case in these early, bleeding edge tech days.

I’m sure the kit will eventually become hyper sensitive so that even just tensing, or moving your fingers will register an input. Also it normally takes around 12 hours to fully train this thing, we had 2 hours at the most, hence why being so animated was the only real way to get consistent inputs. 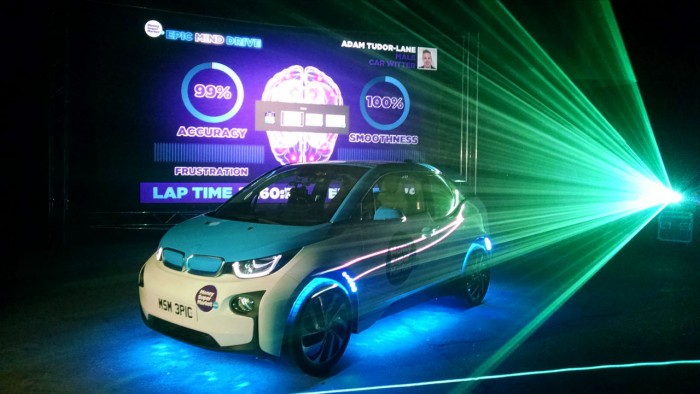 With all that aside it was a truly freaky, incredible experience. Watching a full size car set off with nobody in it is eerie enough, but when you have no joystick, controller or any physical input in front of you it’s even more terrifying!

If you want a chance to have a go yourself you can be one of the few people in the world to control a car with brain power alone!

The MoneySuperMarket Car Insurance Epic Mind Drive experience is live now. Drivers should go to http://www.moneysupermarket.com/hubs/car-insurance/mind-drive/ and register before 12 noon on Wednesday 15th July for the chance to drive the mind-controlled car on Thursday 16th July. 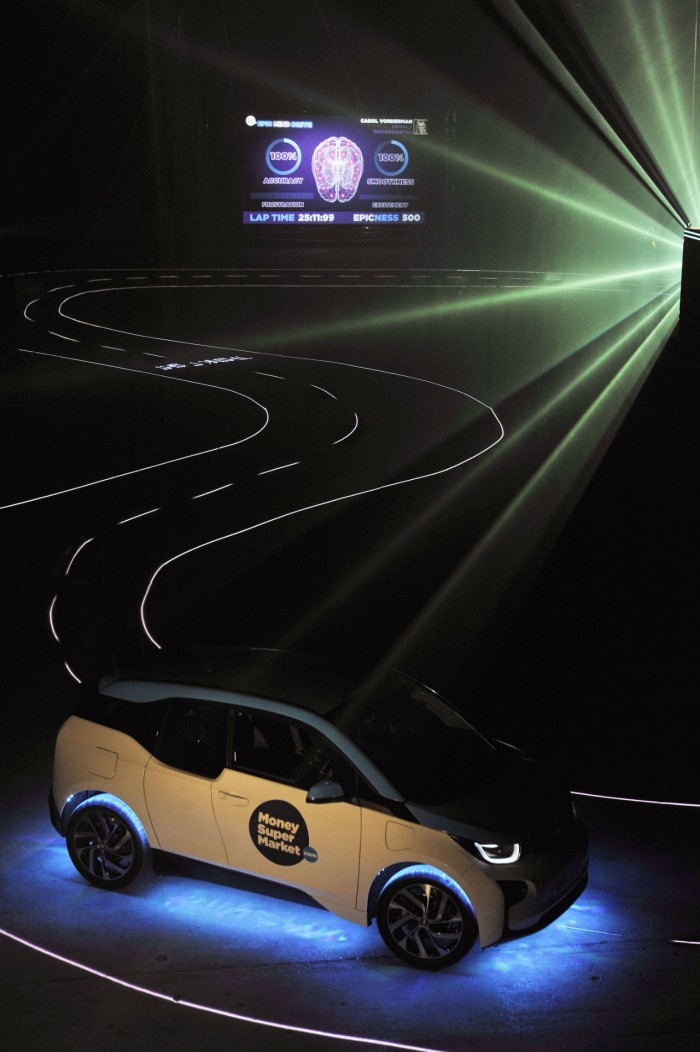