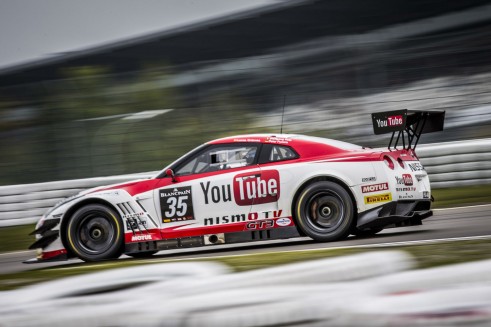 After watching the Nissan GT-R NISMO GT3 battle around the world in last year’s Blancpain 2013 championship – and ultimately winning the Pro Am drivers & team’s category – I had to find out more about this racing behemoth.

So I headed to JRMotorsport in Daventry (JRM), the company that builds them. 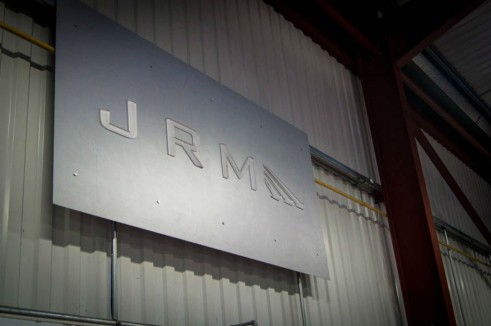 JRM are THE Company that manufacturer the Nissan GT-R NISMO GT3, you can’t get one anywhere else. 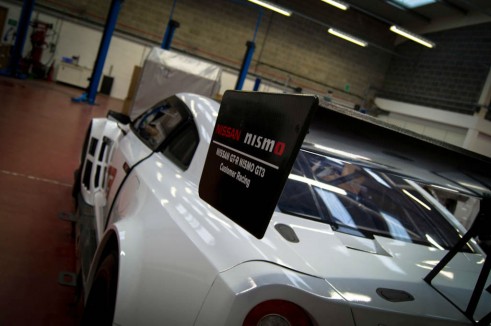 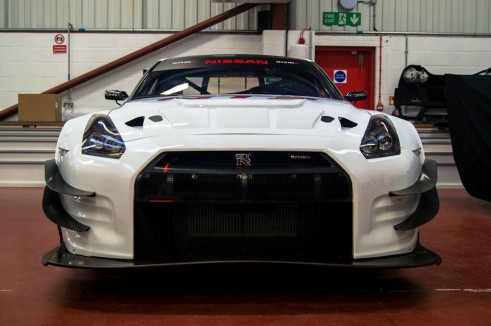 Currently JRM supply cars to clients in Japan, France, Germany & the UK. In 2014 JRM are aiming to target a further 10 car sales within these (as well as other) regions.

When we arrived for a factory tour the first of those builds were well underway. 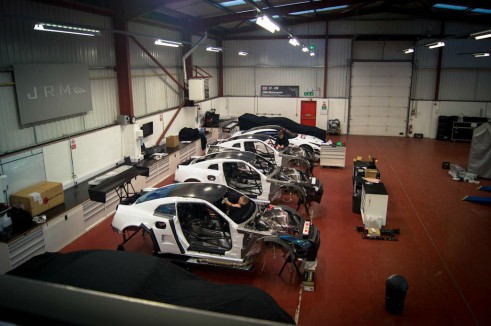 Each car takes around 300 hours to build, if you were to order one today you could be the proud owner in just 10-12 weeks! 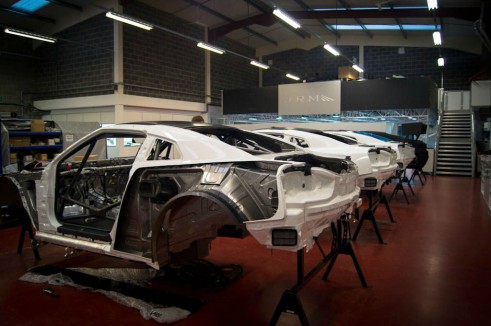 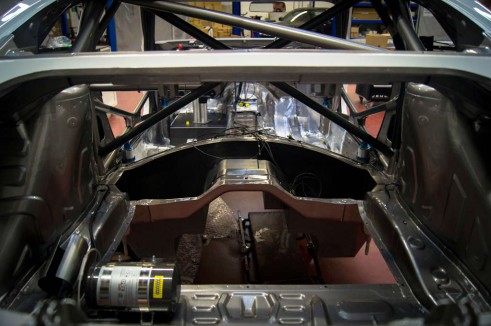 It all starts off with a standard Nissan GT-R Bodyshell (sans roof) sent directly from Nissan in Japan.

JRM are then responsible for the transformation of the body shell…templates are used to cut out the rear arches, floor and various other race spec holes. A lightweight carbon fibre roof is also fitted. 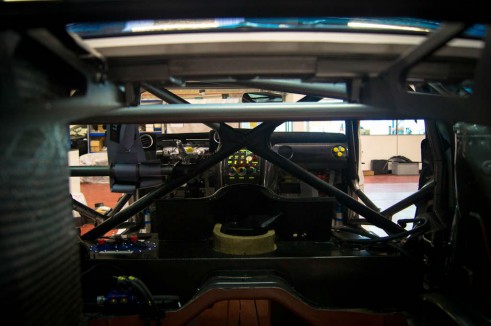 After the shell modification has been completed JRM then manage the installation of the FIA approved, six point welded roll cage.

80% of this car has JRM manufactured supplied parts. After one final short journey (for painting) the body shell eventually makes it to JRM Daventry, where the real work begins. 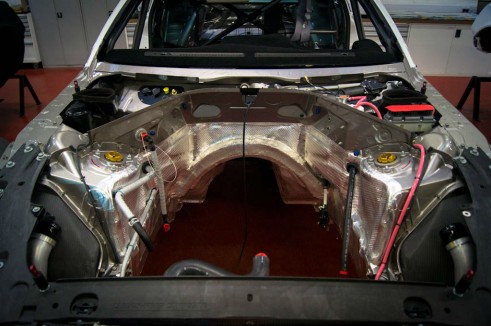 The GT-R GT3 uses the same basic engine layout as the road car, twin uprated intercoolers have been added as well as a top mounted oil cooler.

Engine wise the changes are minor, different cams are used along with uprated high flow turbos – the same now being used in the Nissan GT-R NISMO road car. 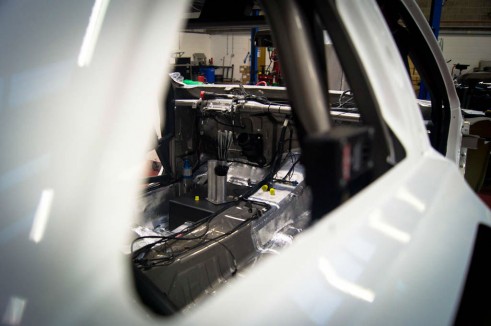 A Pectel ECU is installed instead of the original, this allows different fuel maps to be flashed on a per track basis. It can even control things as minute as the pit speed limiter, it’s basically the cars single brain.

It also enables in car control of the ABS and traction control systems, letting the driver turn up, or tone down the electronic safety net on the fly. 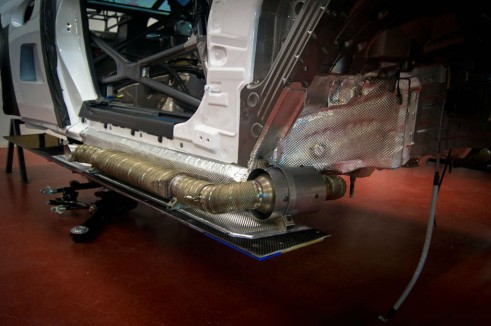 Twin straight through 2.5 inch exhausts run from the engine bay down each side of the car, exiting from the lower door sills. The whole system is fully heat wrapped to help keep the car as cool as possible. 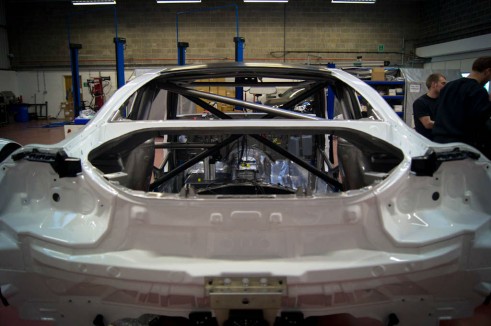 Gone is the road cars dual clutch setup, instead a Berkshire sourced Hewland semi-automatic single-clutch gearbox is used – in favour of reliability.

The whole unit weighs only 80 KG and is good for 4,500 KM before a rebuild. Pneumatic paddle shifters control the gearbox sequentially, through a quad plate Sachs racing clutch. 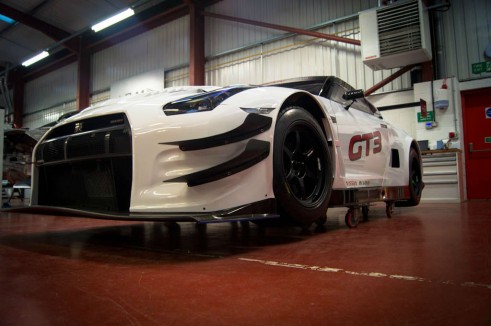 Also absent is the GT-R’s all-wheel drive setup – it’s not allowed in GT3 racing – so that power is transferred through a carbon prop-shaft to the rear wheels.

Every GT3 car has to run through the FIA’s Balance Of Performance system (BOP). This is where each car is driven around a certain track by the FIA, then they adjust limits on horsepower, weight, engine management, and aerodynamics.

This helps to prevent a single manufacturer from becoming dominant, and ensures a fair playing field. 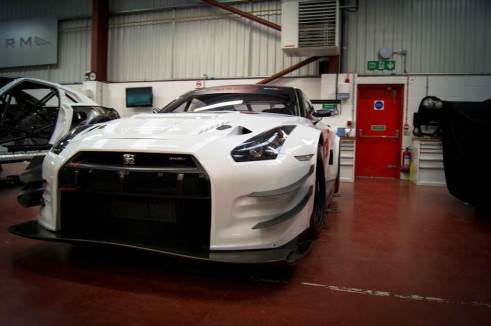 Target build weight for the Nissan GT-R NISMO GT3 car is around 1300 KG, with a top speed of around 285kph, this makes the JRM GT3 car a formidable customer package, with engineering and full parts support available.

Currently the weight balance is 56% / 44% front to rear. There are still lots of ongoing developments to make this championship winning car even better.

The GT-R runs a 40mm restrictor on both of its turbo inlets; output is approximately 550 BHP with 650+ NM of Torque. 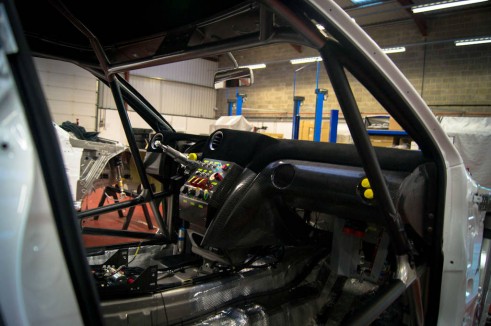 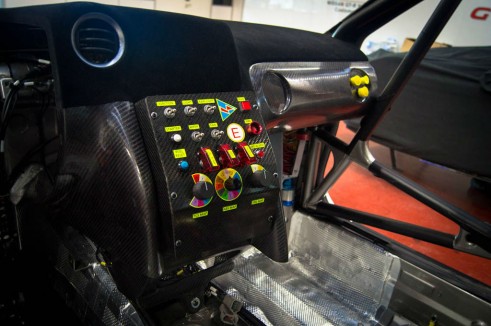 Even the dash is an exact copy of its road legal brothers…except its carbon, weight is such an issue that the sprint lights used in some races are even lightweight carbon fibre copies from the road car. 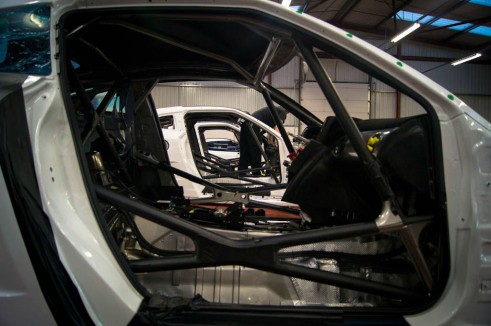 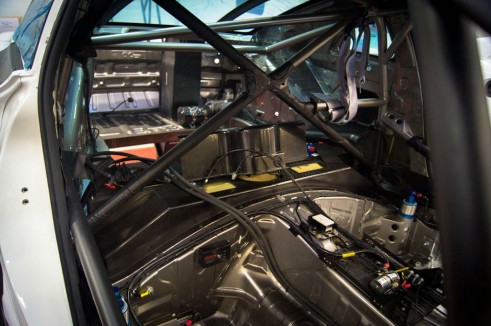 Fuel is supplied from the centrally mounted 132 litre ATL produced FIA approved fuel tank situated behind the driver, a filler strut runs across the middle of the car just below the rear three quarter windows.

This set up enables the fuel filler to swap sides with just a few bolt changes. 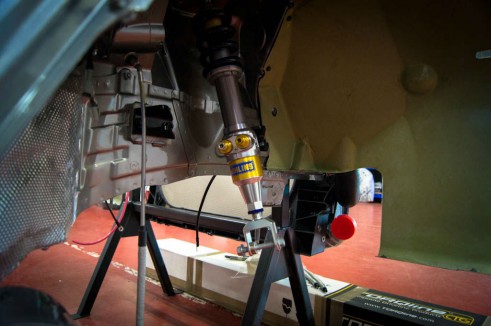 The GT3 uses Öhlins four-way adjustable shocks, these were a new development for the 2013 season, previously only two way adjustable dampers were used. Bump, rebound, high and low speed can all be changed along with ride height. 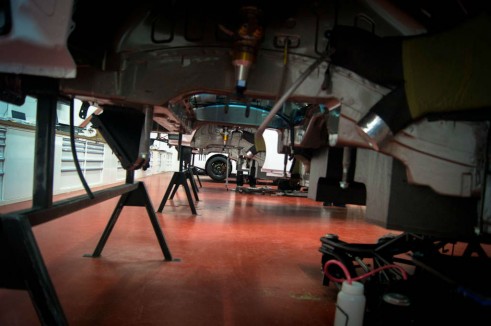 Braking is supplied courtesy of steel Brembo discs, these are used to keep costs down. One piece, billet aluminium callipers feature a front loading brake pad mechanism in order to minimise pit stop times during a 24 hour race format. 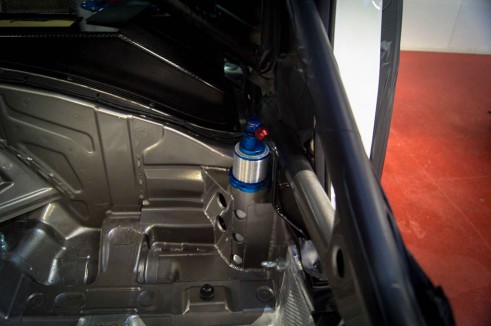 Another pit stop aid are the built in air jacks, attach an airline to the front wing of the car and 4 jacks shoot downward lifting the GT-R clean off its wheels, handy!

At the rear the road cars standard callipers are used in conjunction with race spec pads. Yes, the original callipers really are that good! 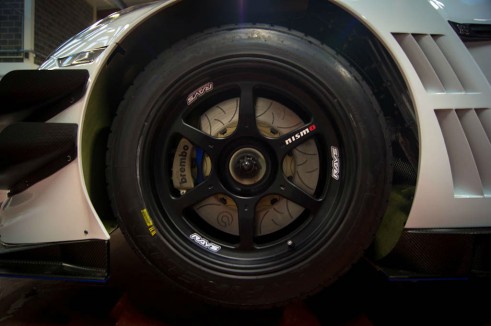 20” lightweight Rays alloys are fitted, these are the same width and profile front to rear, making the setup more cost effective to run than some competitor cars.

All the windows are Plexiglass, the windscreen is the thickest but the rear window actually flexes when pushed. 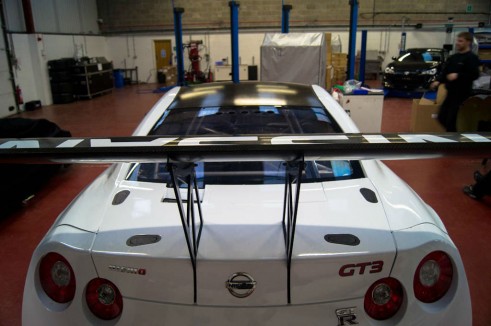 Aero plays a massive part in the GT3’s success. The whole package adds an extra 1000 KG of downforce at speeds above 125 MPH.

Front dive planes or canards help keep the front end pinned to the track, a large front splitter runs under the engine bay, this is the first part of the three section, flat carbon fibre floor. 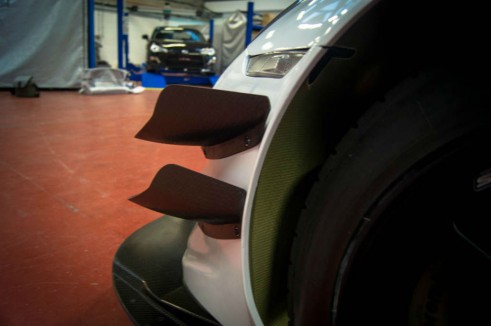 If you are going endurance racing you can opt for the 24 Endurance package, this consists of road car head lights, endurance spec meshes, 30amp battery, endurance brake pads and front bumpers with HID spotlights…price on application. 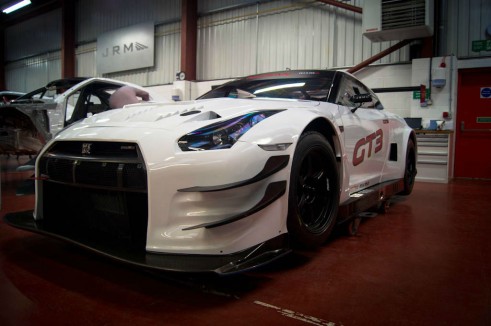 JRM also build and sign off all of the cars sent back to Japan for NISMO regional customers.

The development process is two sided though, both NISMO and JRM develop the car separately then combine their findings.

Amazingly, at no time do they ever hold joint test days, however NISMO engineers always attend major races, alongside the JRM team. 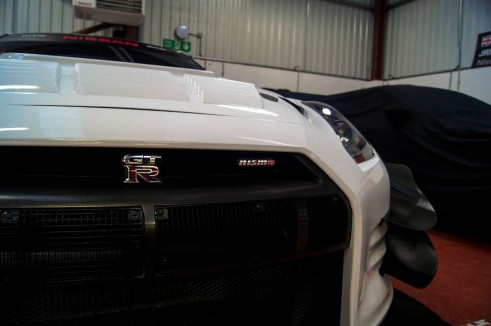 The Nissan GT-R NISMO GT3 is a technical masterpiece.

For NISMO/JRM to create a fast, championship winning car packaged in such a large, squared off design is unbelievable.

It’s a testament to how great a design the Nissan GT-R is; but most importantly to British build and manufacturing knowhow! Who says we don’t make things anymore?! 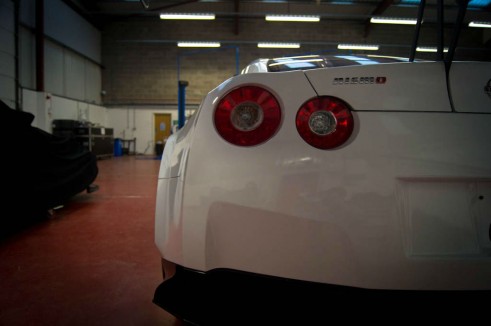 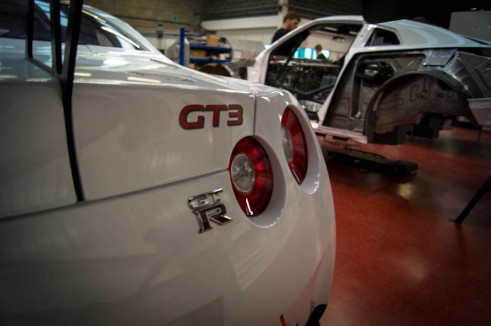 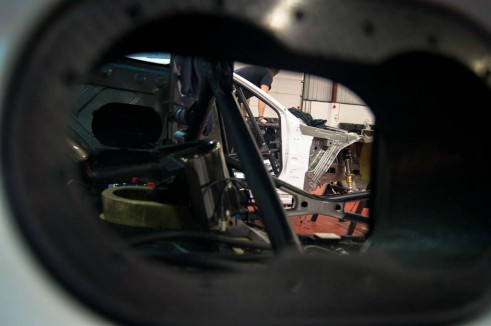