Last weekend BTCC race fans were entertained with close, fast paced, family friendly motorsport action, the type of entertainment most race series can only dream of providing! As the ITV 4 team mentioned, where else can you buy a ticket on the day, to a top level sport event, and get the chance to meet the main competitors? The camping fans at Oulton Park got a nice surprise on the Saturday night, as several drivers took time out to meet the fans they spent time to chatting, drinking, having a joke, and even play a bit of football, before finding out how many BTCC drivers you can fit in a portaloo! Id like to see Hamilton and co do the same! 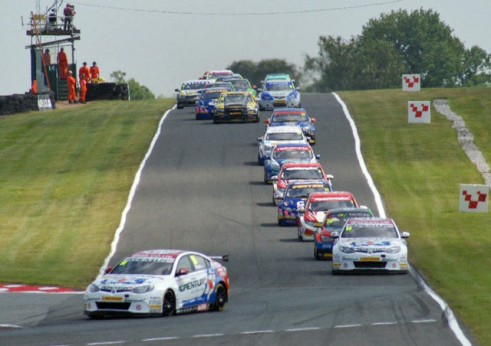 Fun and Games aside the racing at Oulton Park was fast and frantic, MG locked out the front row on the Saturday with Plato on pole, and Sam Tordoff in an excellent 2nd place. Ahead of Shedden was the ballast free Dave Newsham and Andrew Jordan. Series leader Matt Neal could only take 8th on the grid, partly down to ballast and poor health.

As the first race of the day got underway everyone made it through the first corner without incident, the two MG’s leading the way. After a few laps the MG’s lead Shedden ,with Jordan, Newshan and Colin Turkington next up, and Matt Neal not too far behind.

Eight laps in Turkington and Newsham collide, nothing major and both continue. Shortly after smoke is spotted from the rear of Jordan’s car. Maybe a rubbing tyre? Oil? well Newsham thinks so, he jumps on the radio to the stewards complaining, however Turkington uses the Toyota drivers cautious nature and passes him. The stewards are in contact with Jordan, and his team and are happy to let him continue, its only exhaust padding that’s smoking and Jordan is still on the pace. Behind him Neal takes Newsham moving up to 6th on lap 10. Matt Jackson in the Airwaves Ford Focus is next to challenge the Speedworks Toyota, and forces Newsham wide to take 7th on the very next lap. 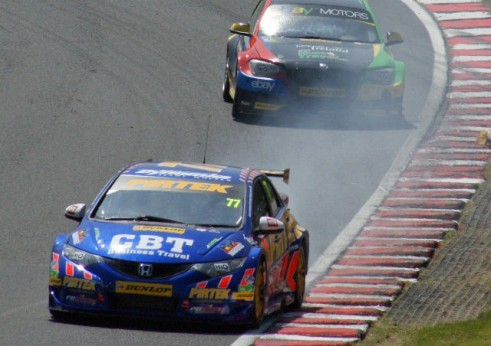 There’s action further down the order too with Rob Collard’s BMW, Adam Morgan’s Toyota, and Tom Onslow-Cole’s VW are battling for the lower points when Tom Onslow-Cole gets forced off in an incident with Collard. He makes a great save, but it drops him way down the order to 15th, Morgan is the winner here passing both cars for 8th.

Jackson closes on Neal in the final laps, but its not enough as Plato takes a commanding, unchallenged easy victory from Tordoff. Shedden is third in front of the smokey Jordan, Turkingtons BMW, Neal, Jackson, Newsham with Morgan and a slightly battered Collard separated by 33 thousandths of a second in favour of the Toyota driver completing the top 10.

The Jack Sears trophy for S2000 machinery was fought right to the wire, Liam Griffin piping Lea Wood on the track for class victory, only to be demoted by the stewards for gaining an unfair advantage on the final lap.

The grid lined up as they had finished race one with the two MGs in front, the only difference now was that Tordoff’s car was wearing the soft Dunlop tyres, while everyone around him was running the hard compound. In fact Matt Jackson down in 7th was the next soft shod competitor in race two.

The lights went out and the two MGs raced away, as they had a few hours earlier, however things weren’t as organised as race 1, team mates Foster and Collard tangled, and Jack Goff’s Vauxhall retired getting stuck on route back to the pits. The safety car was scrambled, the Hondas of Neal and Shedden both managed to gain a position just before the yellow flags and the Safety car period of the race. You don’t win multiple championships in the BTCC without knowing every last rule!

After the Safety car had pulled in Plato pulled away, and Shedden chased him. Behind however, it was getting very tight. Tordoffs soft tires weren’t working as well as the hards, Turkington, Neal and Jordan were all over the back of the MG – maybe in the week leading up to Croft we will hear of a secret Dunlop MG tyre test to help these issues! 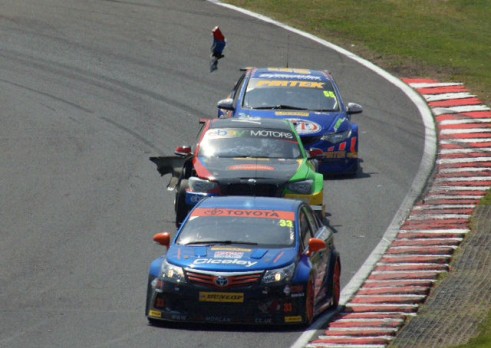 On lap 14 of the extended race (due to safety car intervention) Turkington took Tordoff for 3rd, and Neal follows shortly after, Jordan, Jackson and Newsham also close and start hounding the MG (remember Jackson is also on the soft tyres). Lap 15 and Jackson takes the MG for 5th place, Newsham has a look at Jackson who is in turn battling with Tordoff, Jackson gives the MG a tap at the hairpin but Tordoff comes back at him! The two make contact, and Newsham is the winner in that contest, as the Focus and the MG both drop down the order following suspension damage.

Plato takes a 2nd easy victory to put him top of the championship with Shedden second. Turkington, Neal, Jordan, Newsham, Morgan, Rob Austin, Daniel Welch (son of former rallycross ace John) and Jeff Smith round off the top ten in that order.

The final race of the day would see Jeff Smith promoted to pole position, as a result of the reverse grid, with Welch’s Proton; the only car on hard tyres in second.

Rob Austin’s rear drive Audi gave him a fantastic start, “Sherman” powered into the lead from Smith and Mogan in the Toyota’s, 3 laps down and championship leader Plato retires with his car on fire, this will stir up the championship! Austin and Smith battle for the lead like a couple of kids in a playground fight. Morgan, Welch, Turkington and more all start to reel in the leaders as they battle up the field. A big shuffle of the order on lap 5 sees Welch drop down the order. Shedden and Neal have a short lived battle between themselves further around the lap, whilst Newsham gets punted off, and Shedden has to pit for a new tyre. Thats two championship contenders not scoring in race 3! That number was nearly 3, as Neal hits the kerb at Hislop’s and almost rolls his Civic – man this is awesome stuff! 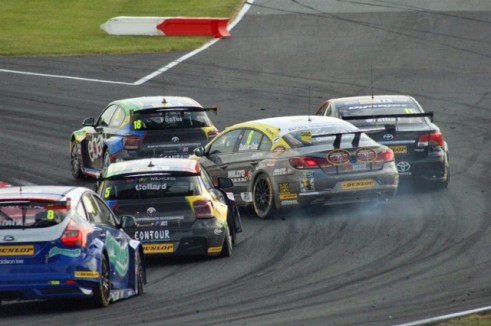 Up front Morgan has joined the fight for the lead, Smith bumps Austin and takes over the lead. Morgan’s Toyota follows him through, Jordan takes Mogan to make it a Team Pirtek 1-2, while Austin’s Audi starts to fall back. Turkington who’s had a quite race compared to most at the front, takes Morgan for third. Back at the front though its not over yet, Smith loses on the brakes and has to take to the grass rejoining in 5th, as team mate Jordan takes the lead with Turkington 2nd and Morgan 3rd.

Smiths day goes from bad to worse as he runs wide again on the following lap and ends any hope of points. At the flag Andrew Jordan takes his 2nd win of the season from Turkington, in the ever improving BMW, a fine podium for Adam Morgan with Matt Neal taking a haul of points in 4th. Rob Austin Racing will have plenty to celebrate with Rob finishing 5th, and team mate Will Bratt 6th, ahead of Tordoff’s hard tyred MG. Nick Foster, Frank Wrathall’s Toyota and Aron Smith taking the final point in his Ford Focus. 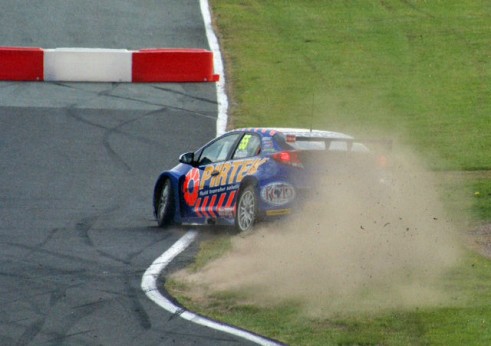 The championship after Oulton Park is tighter than before, now with Neal 4 points ahead of Andrew Jordan, and a further 3 ahead of Jason Plato. Reigning champion Shedden leaves Cheshire 31 points behind his team mate, with Tordoff and Turkington next up.

I was going to finish with a shot at the F1 circus but feel this is inappropriate, after the tragic news that came out of Canada following the death of a track marshal – without whom no one can go racing. I’m sure I speak for everyone, when I say that our thoughts are with the family at this very difficult time.