Silverstone was the next destination for the BTCC circus as the teams and fans alike enjoied better weather than afforded at Rockingham a few weeks earlier.

While the weather stayed dry for qualifying a late red flag saw an action packed final 5 mins with plenty of cars caught in traffic and bringing about a slightly mixed up grid for the day’s first encounter. 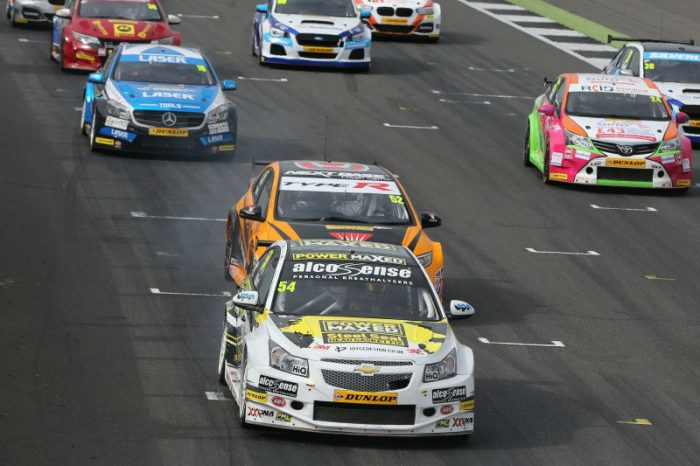 Ash Sutton planted the Triple 8 RCIB Insurance Racing MG6 on the pole just ahead of Tom Ingram in the Speedworks Motorsport Toyota Avensis. 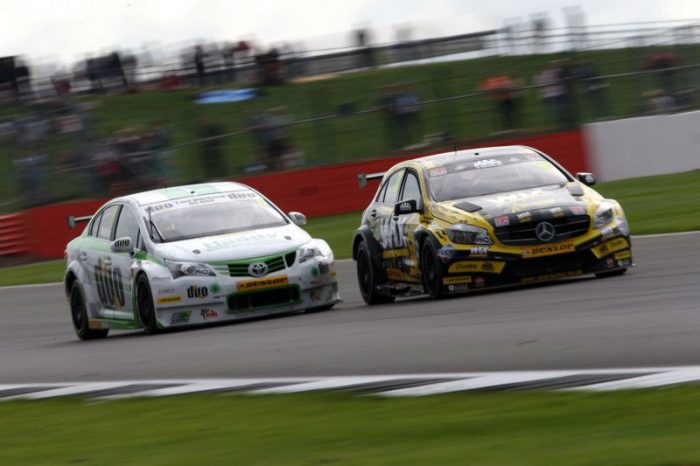 Adam Morgan in the Wix Racing Mercedes A Class headed up the third row ahead of the Handy Motorsport Toyota Avensis of Rob Austin.

Ingram took the lead at the start and led for the opening third of the encounter before being eclipsed by the pair of MGs, Sutton first before Cook bumped and barged past a few laps later landing the first MG 1-2 for a long time (if ever) in the BTCC.

Ingram took the flag third ahead of the Focus of Jordan, and the battling Austin and Morgan. 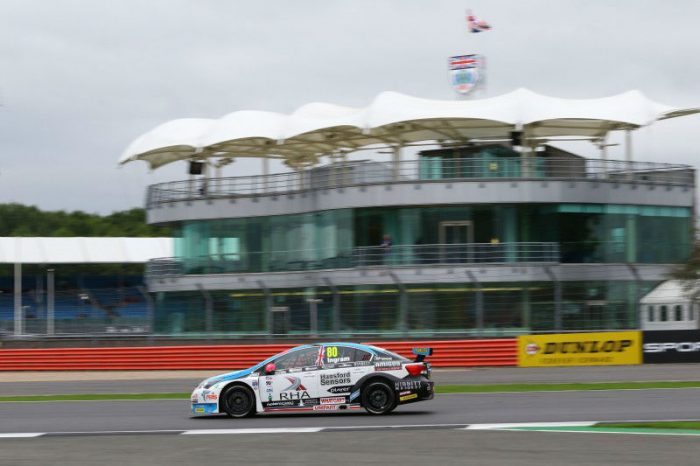 Behind this, the championship battle was hotting up. Both Yuasa Hondas suffered punctures effectively ending both their races, Shedden’s a failure Neal’s as a result of contact with Aiden Moffat’s Laser Tools Mercedes later in the race.

This resulted in Jake Hill taking 7th at the flag for the Team HARD Toyota Avensis ahead of Aron Smith. 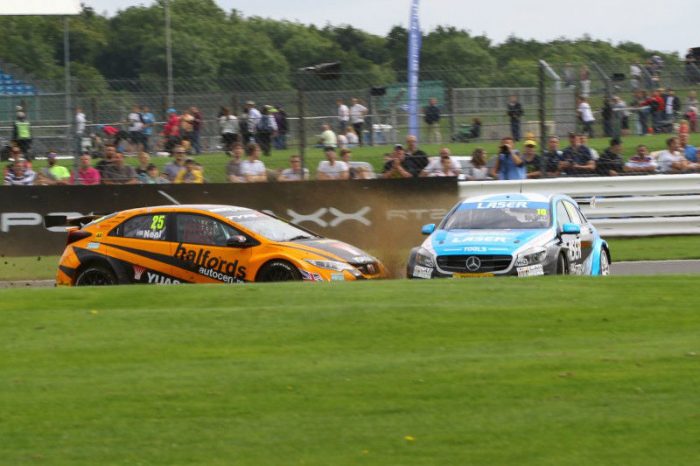 Rob Collard in the JCT600 GardX BMW 1M and Colin Turkington’s Subaru Levorg rounded out the top 10, after a fantastic battle for the low points saw the BMR Subaru’s and WSR BMW’s complete with Mat Jackson’s Motorbase Ford Focus battle hard for what may yet prove to be valuable championship point. 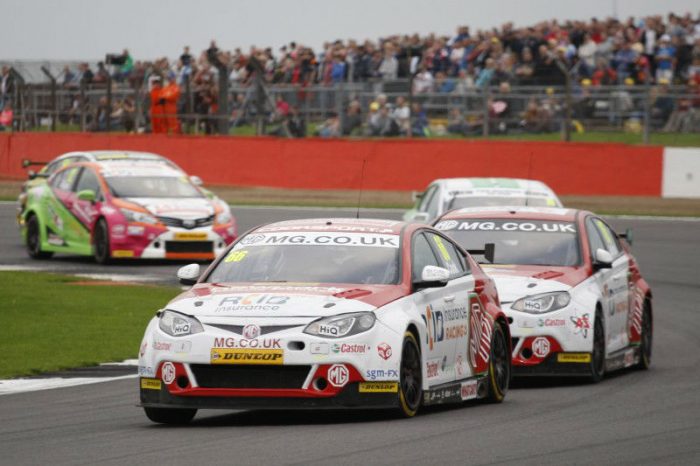 However. It would not end there. The two MGs were later disqualified on a technical breech relating to the placement of the car’s rear wings in relation to the rear wheels.

We are talking millimetres but rules are rules, Ingram inhered the victory from Jordan and as a result promoting Aiden Moffat and Jason Plato’s Subaru into the top 10.

The two MGs would start race 2 from the back of the grid and with full ballast.

Andrew Jordan went one better than his race 1 (eventual) second place by winning the second encounter of the day from Adam Morgan with Ingram taking his second podium with a deserved third. 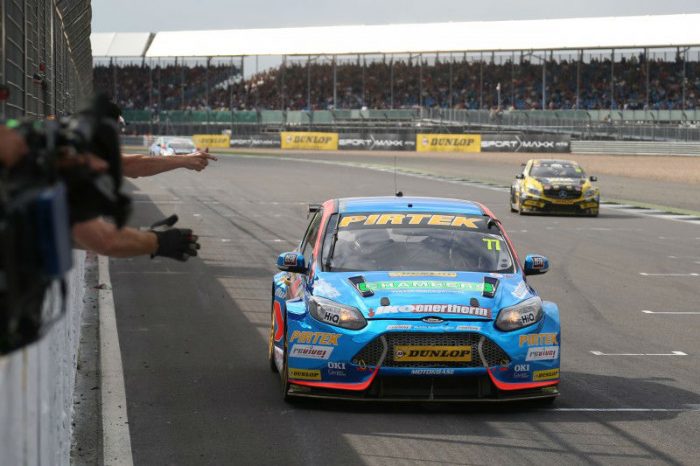 Jordan hounded Ingram from the outset and eventually passed the Toyota on the 7th tour.

Morgan followed a lap or two later and looked like he may be in a position to catch the Focus before a late safety car to clear debris left following Jeff Smith’s spectacular puncture on his Eurotech Honda Civic. 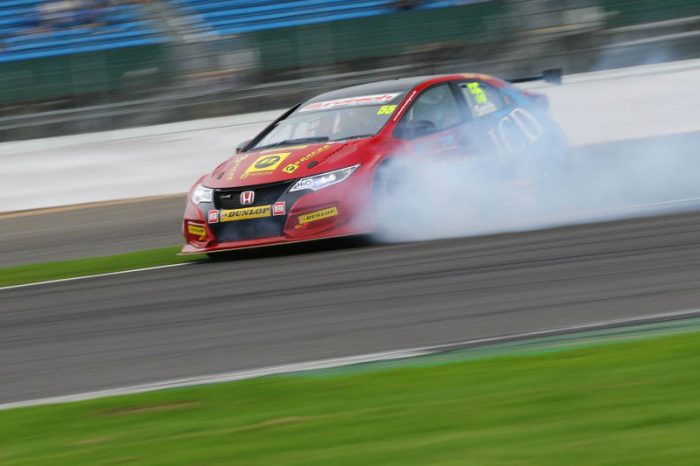 It looked like Morgan may be able to get the better of Jordan, the Mercedes being on the more fancied harder tyre but the safety car period seemed to help the Ford pilot and he drove off at the restart and on to victory.

Behind Ingram defended valiantly from the Subarus of Turkington and Plato with Mat Jackson’s Focus up next Collard, Shedden, Moffat and Abbot would fill the final places in the top ten.

Again the challengers fought for smaller points with championship leader Tordoff in the JCT600 Gardx BMW 11th and Neal 15th. 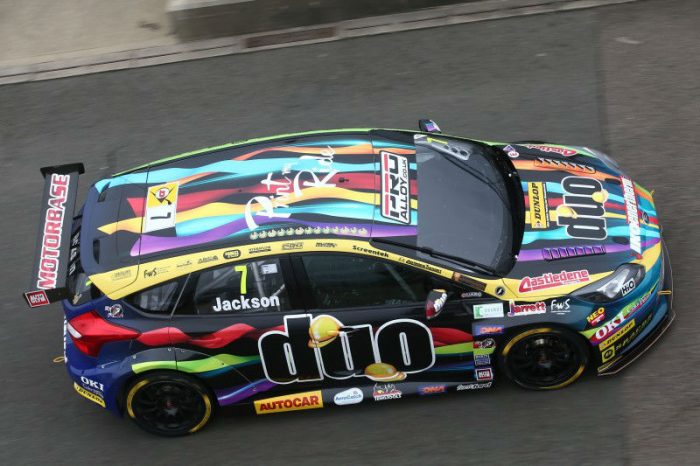 Shedden however gained some luck, winning the draw for pole for race 3 seeing him line up along side Collard with Jackson just behind in third.

Collard shot off to an early lead in race three and, for a moment it look as if Jackson might join him but for some brilliant driving and defending from Shedden to hold onto second in the run down to Brooklands on the first lap.

Shedden broke from Jackson and quickly dealt with Collard and settled into a rhythm that would go unbroken. 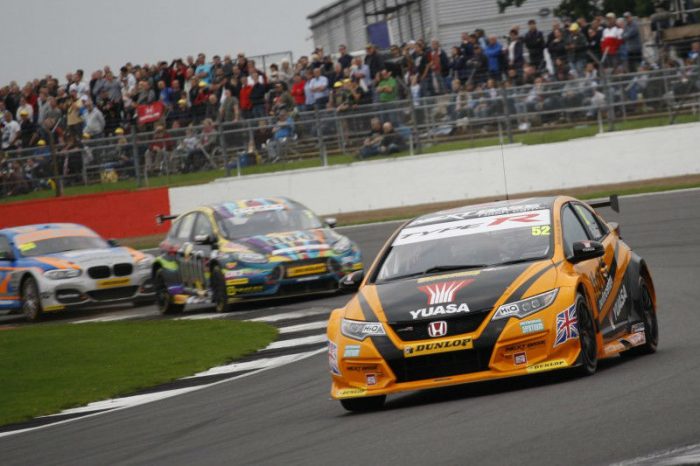 A lap or two later Jackson passed the BMW but could do nothing about Shedden ahead.

Behind the challengers were working their way up to the front of the action with Turkington, Plato, Neal, Jordan and Tordoff all looking to add to their tally prior to Brands Hatch.

Turkington would come out on top finishing 4th ahead of Neal, Tordoff, Cook and Jordan while Moffat and Sutton claimed 9th and tenth. Plato would suffer a puncture on the final set of corners and be classified 12th. 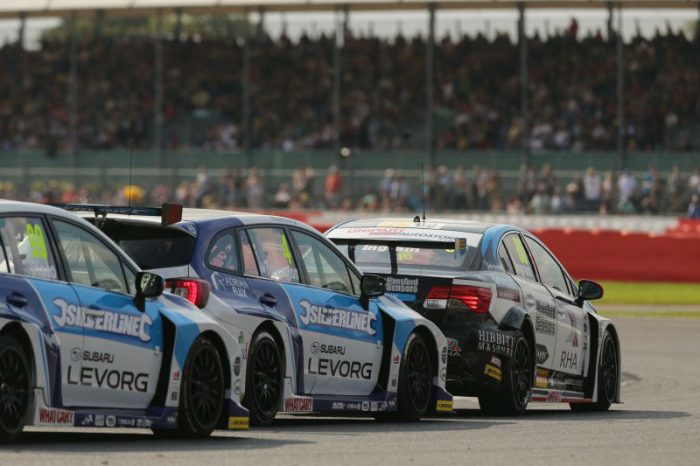 So, two weeks from now at Brands Hatch the champion will be crowned but who, as it stands Tordoff leads Shedden by 11 points with Neal a further two behind but staggeringly 8 drivers have the chance to take the crown at Brands in early October. 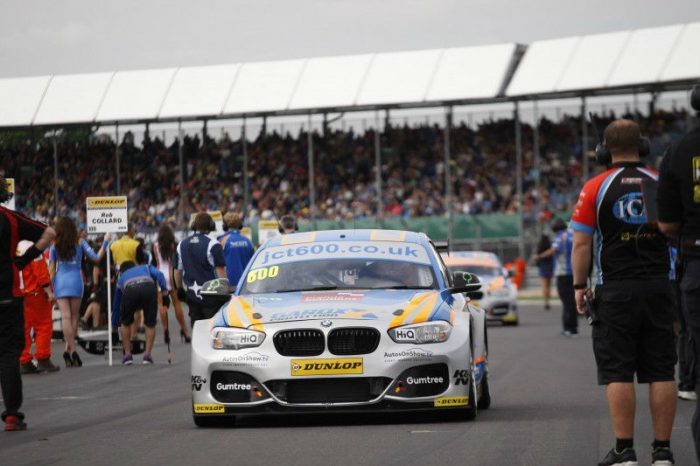 Make sure you have your calculator handy!