Donington Park and the changeable British weather welcomed the 2016 BTCC contingent, – minus one. Andy Neate and the Halfords Yuasa Honda squad parted ways during the run up to the event, the works squad reverting to a two car entry for the duration of the 2016 campaign. However, Sunday afternoon news broke that Eurotech would be racing a 3rd Honda Civic from Thruxton onwards for Daniel Lloyd. Presumably it took longer than anticipated to strip the orange paint prior to Donington…

Qualifying saw the pole change hands on numerous occasions due to a drying track but, a red flag moment from the end saw a 5 minute rush of activity as everyone attempted to better their times RCIB Insurance Racing MG locking out the front rows with Ash Sutton taking his maiden pole in his second BTCC event from teammate Josh Cook. 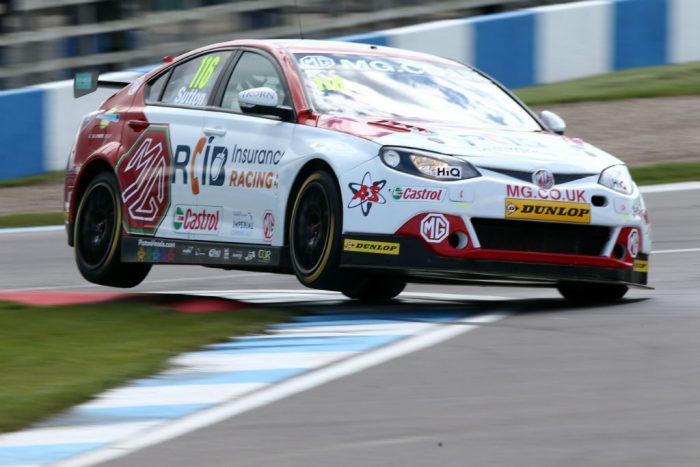 The second row saw the Motorbase Ford Focus of Mat Jackson line up alongside Gordon Shedden in the Yuasa Halfords Honda Civic before Tom Ingram’s Speedworks Toyota Avensis side by side with (not for the first time this year) Rob Collard’s WSR run JCT600 Gardex BMW 1M.

Aron Smith parked the BKR Racing VW CC 7th ahead of Jack Goff’s 1M, in IHG Rewards colours. Series leader Matt Neal in the second (and now final) Halfords Yuasa Honda entry was 9th ahead of the ever improving Jake Hill, 10th for RCIB Team HARD in another Toyota Avensis.

Mat Jackson dominated the early round of the day, splitting the MGs off the line Jackson didn’t put a wheel wrong until the flag – a red one, fell, more about that shortly. Behind the Ford the battle raged for the podium as Collard and Ingram fought hard against the MGs while the two Smiths, Aron and the Eurotech Honda Civic of Jeff got among the works runners.

It was a different story for the other Honda squads though, Shedden and Neal both opted to take the unfancied soft tyre while the cars were heavy with success ballast and, as a result both cars dropped out of the top ten come the (red) flag. 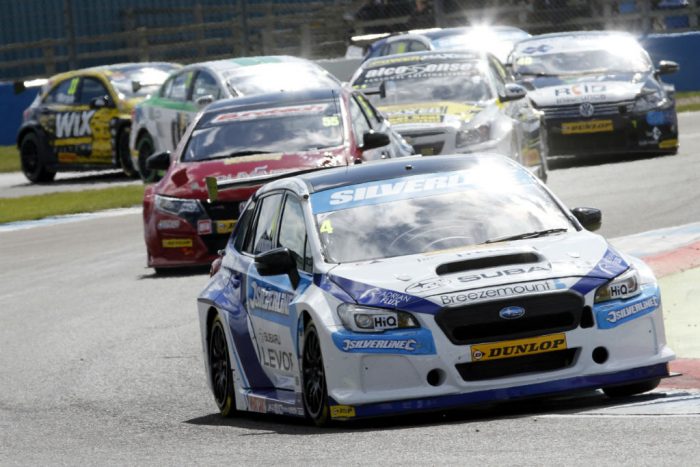 It was worse however for the Speedworks Civic entry of Matt Simpson, an audaitious move on Dan Welch’s Proton saw the pair make contact twice ending both drivers races prematurely in the Coppice gravel. While the safety car was out (for the second time) James Cole in the BMR run Subaru had a huge moment as the car caught fire coming through the final chicane.

Cole managed to park by the fire marshal’s post and get out quickly while the blaze was delt with. Sensibly the race was ended with a lap or so remaining. 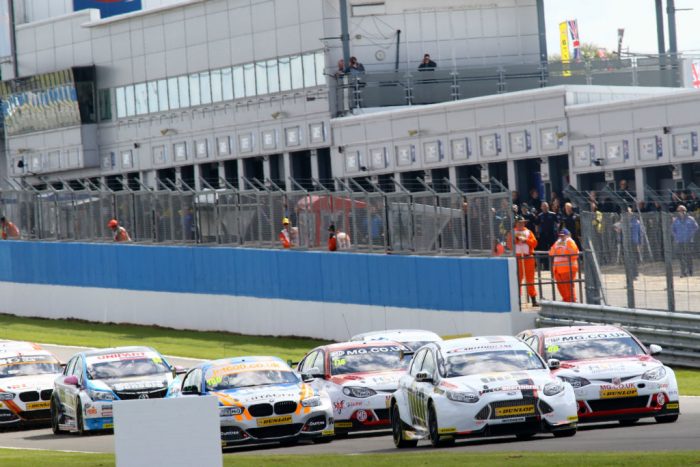 With race two lining up as race one ended the it was no surprise to many to see Jackson again set off in the lead, it was mearly a case of how the Ford would hold the weight compared to the lighter cars around it.

The answer would come around three quarters of the way into the race as Rob Collard – who had started 6th made one of his trademark lightning starts into third ahead of a massive BMW/MG/Honda battle behind. Collard dispatched of Ingram (with no contact this week) and set upon the Ford ahead and, in the closing stages made the move, Jackson didn’t fight, later citing scoring points and fighting for the championship combined with the fact that Collard was obviously faster in a lighter car. 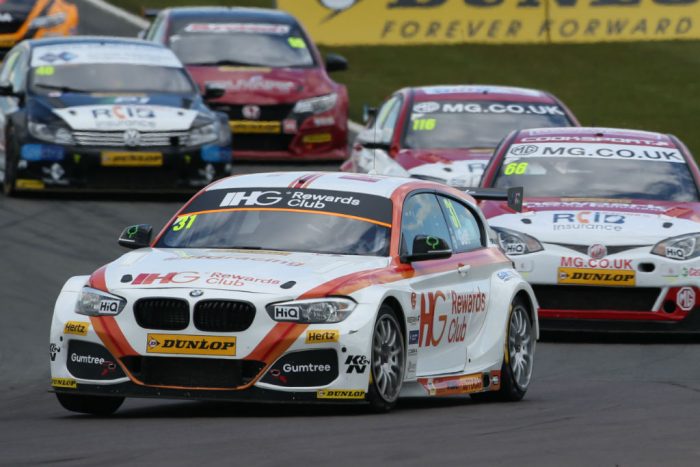 Behind this we saw however a fantastic example of good, close, clean touring car racing. Plenty of side by side action fom some of the series younger contenders and no rash moves, no silly lunges but plenty to keep the crowd entertained. Goff and Cook proving that, you don’t have to make contact to give the fans excitement. 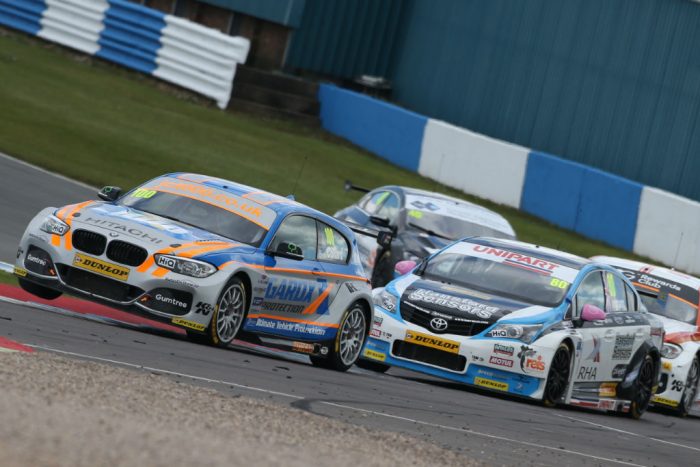 At the flag (chequered this time) Collard held off Jackson to become the 5th winner in 5 races while Aron Smith fought through to claim his and BKRs second podium appearance in as many meeting. Shedden, Goff, Neal, Cook and Tordoff followed before Aiden Moffatt in the Laser Mercedes A Class and Rob Austin in the Handy Motorsports Toyota Avensis rounded out the top ten.

Tordoff, as he did at Brands Hatch would benefit from the reverse grid draw.

Race 3 was a bit of a slow burner in comparison to what had gone before, with most of the grid now running the unfancied soft tyre it was going to be a case of who’s performance dropped off when and who was in the best place to capitalise. 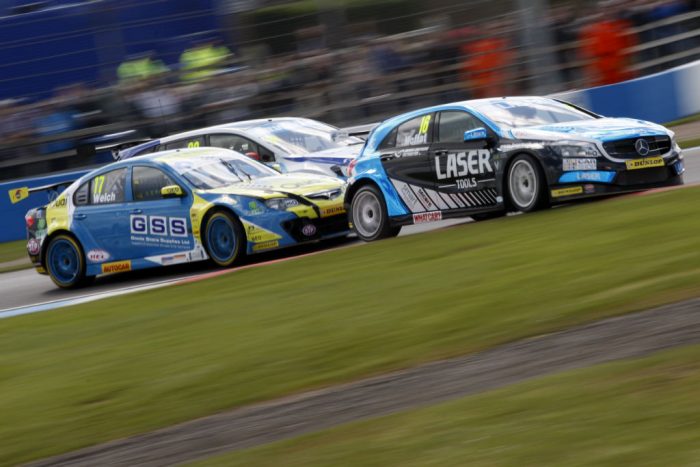 Honda, who had made the right call early in the day were in the box seats behind the BMW pair of Tordoff and Goff playing a waiting game as behind the positions swapped almost corner by corner as MGs, Toyotas, Fords and Mercedes all fought for points and position. 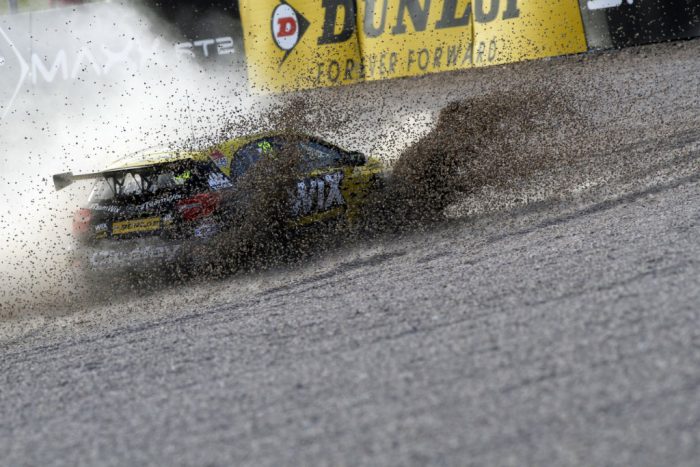 Come the flag it would be the Honda pair of Neal from Shedden from Tordoff, narrowly holding off his (medium tyred) team mate Collard at the flag. Goff would eventually finish 6th behind the MG (again on the medium tyre) of Sutton while Moffat, Austin, Cook and Andrew Jordan completed the top ten, the latter having struggled in the mid pack all day afterqualyfing for race 1 in 25th. 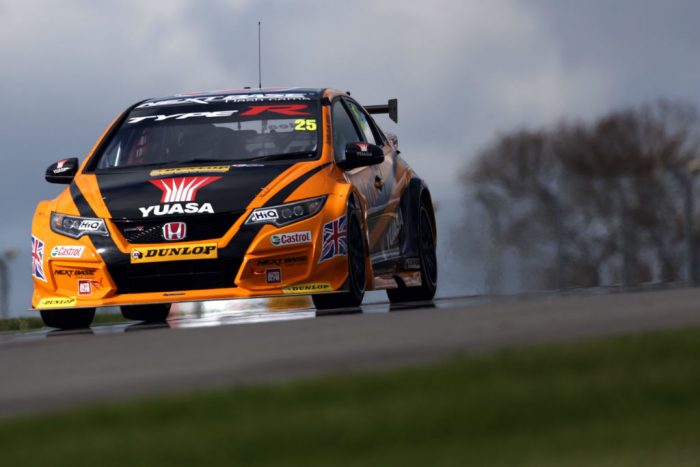 As he did leaving Brands Hatch, Matt Neal leads the championship from Gordon Shedden by 5 points but, now the top 8 are covered by 23 points. The series heads to Thruxton next month. We will be, will you?