The BTCC returned after a short break to Yorkshire and the Croft circuit for the 5th and halfway point in the 2104 championship. The big talking point in the short break was that of the new “longer” 1st gear that the rear drive cars would be forced to run to try and equalise their advantage from the standing start. 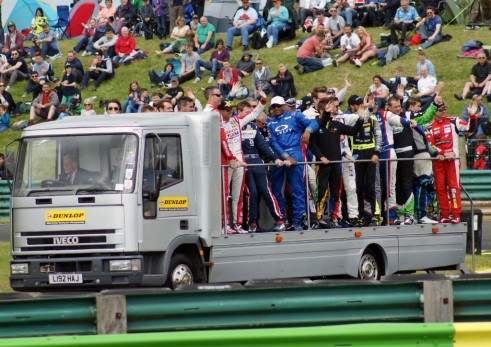 Back to the racing though and after an eventful practice sessions Rob Austin found himself taking to social media in a bid to obtain a door window for his Exocet Racing Audi A4 following an off, without this he would be unable to partake in qualifying, fortunately fan power won the day and Austin qualified 10th, just ahead of the newest winner in the BTCC Aron Smith in his Team BMC Restart VW CC.

At the front however it was Colin Turkington (new gear ratio and all) in the Ebay Motors BMW  ahead of Jason Plato’s Triple 8 KX Energy MG6. 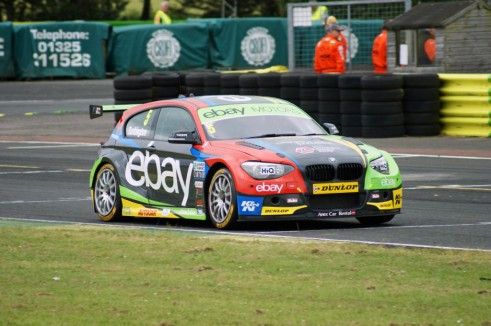 Three Honda’s were up next, the two works entries of Gordon Shedden and Matt Neal’s Yuasa Civic Tourers ahead of reigning champion Andrew Jordan in the more conventional Pirtek Racing Civic.

30 cars would start at Croft after more woes for Chris Stockton in his Team BTC Power Maxed Racing Chevrolet Cruze, the lack of engine parts ruining his weekend.

After a delay on the grid as Ollie Jackson had issues, the field took to a second green flag lap meaning Race 1 would be a 14 rather than 15 lap event. 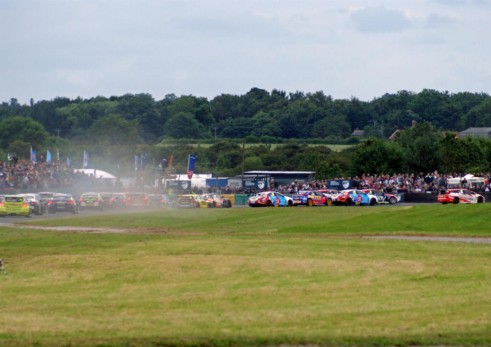 Lap 1 Great start from Plato but Turkington leads in to turn 1 from Shedden, a great start from Rob Collard sees his BMW  up into 4th behind Plato. Big incident behind involving Nick Foster’s similar machine, the Wix Mercedes of Adam Morgan and Rob Austin – who manages to continue albeit at the back of the pack. 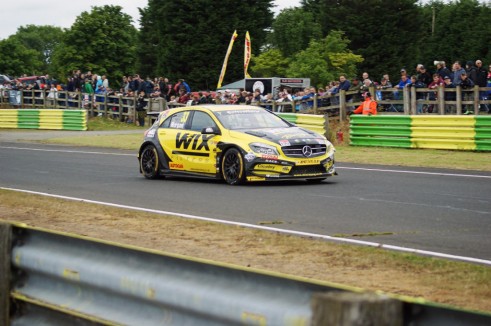 Lap 2 Collard is hounding Plato for 2nd, Jordan not to far back watches patiently.

Lap 6 Neal now joins the battle, Collard is right on the Boot lid of the MG, remember these two collided last time out at Oulton Park, further back the recovering Austin – who had a better time at Oulton Park collides with Warren Scott’s Insignia at the hairpin.

Lap 8 Just behind the Plato duel, Tordoff, Alain Menu, Mat Jackson and Hunter Abbot – using the soft tyre early this weekend are having their own battle for 10th place.

Lap 9 Still no change at the front, Turkington 3.5 seconds ahead of Shedden who in turn is followed by the two battles.

Lap 10 It’s calmer at the front now but more action in the midfield as the two Jacks – Clarke in the Crabbies racing Focus and Goff in the RCIB Insurance Insignia make contact through the complex. 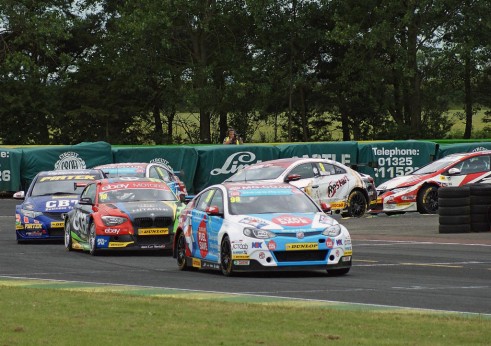 Lap 12 Collard throwing everything into attacking the MG ahead of him but there is no way past, Jordan, closer now to the BMW ahead waits and tries to pick up the pieces yet still no position change.

Flag Colin Turkington takes the first win of the day from Shedden with the Plato, Collard, Jordan, Neal battle up next, just behind Tordoff drops behind the VW of Menu and Jackson’s Focus for 9th just ahead of Hunter Abbot in the Alchosense Audi A4. 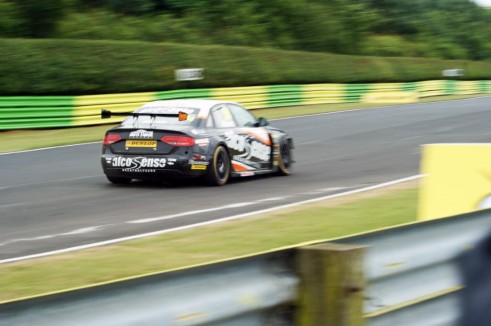 Lap 1 Great start again by the BMW’s and a moment mid pack between Dave Newsham in the AMD Racing Ford Focus as he and Rob Austin are collected by the Airwaves Focus of Fabrizio Giovanardi, Austin went for a gap between the two Fords which seemed to close knocking the Audi and Newsham out, Newsham’s 100th BTCC race will not be one to remember! 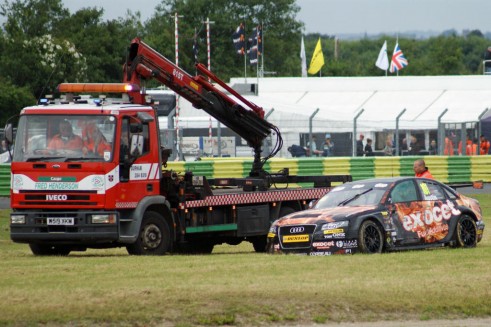 Lap 2 Depper and Ingram continue where they left off in race 1 interestingly both cars on the soft tyre for race 2, more action for some of those in the wars in race 1 as Warren Scot and Jack Clarke tangle, James Cole gets involved too but all three continue.

Lap 3 Matt Neal and Jason Plato both battling for 4th with Alain Menu not too far behind.

Lap 5 Brilliant move by Neal at Sunny in to take the MG of Plato, Plato has no answer for it and the Honda is away, Menu now on the back of the MG. Abbot retires his Audi.

Lap 7 Again there seems to be a train forming behind Plato as Jordan, Menu, Jackson and Tordoff form up behind the former champion. 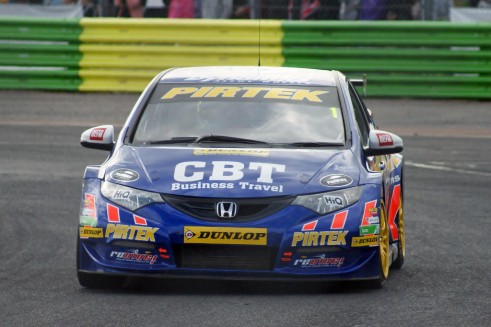 Lap 13 Battle for the small points as Aron Smith and Adam Morgan fight over 14th place, Menu, like Collard before him is trying everything possible to pass the MG of Plato but to no avail.

Lap 14 Menu up the inside of Plato at Clervaux, but Plato’s collected him, Menu off backwards and hard into the tyres and out of the race, Plato continues, it’ll be interesting to see what the stewards have to say about that manoeuvre!

Flag Turkington, again takes an easy and unchallenged victory from Shedden and this time Neal in third, Collard, Jordan, Plato, Jackson, Tordoff, Ingram and Giovanardi round out the top 10 but who will take pole for race 3? 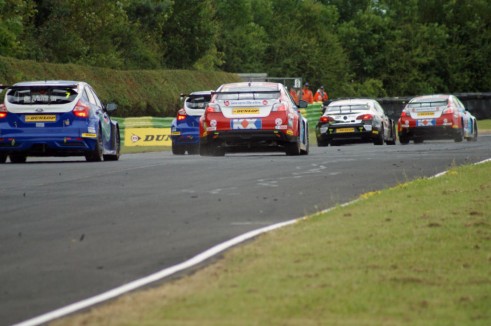 A full top ten reversal initially saw Giovanardi take pole (after he drew his own position live on TV) but following Matt Neal’s disqualification for a ride height infringement the pole would this time be taken by “11th” placed Jack Goff, Plato would be given a 10 place penalty for the Menu collision and therefore started in 16th.

Ingram now starting from 3rd is the only front runner on the hard tyre.

Lap 1 Great starts from both Goff and Ingram as they lead the pack into the first corner but both go off immediately!

Both rejoin but further back as the pack shuffles itself, Giovanadi now leads Jordan, more contact, Jordan nudges Gio and the Ford takes a big hit on the front ripping off the bumpers and dislodging the tyres. Safety car deployed. 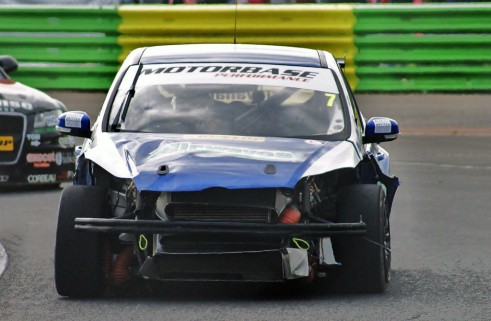 Also in the excitement at the start Matt Neal catches Glynn Geddie’s United Autosport Avensis causing a rear puncture for the latter. Ingram had his usual share of race three luck (or lack there of) by retiring almost immediately while in a good position.

The order behind the safety car is:

Lap 5 Green flags and racing again (none of this standing start nonsense here!) and now for 18 laps, Menu making up positions after the race 2 disappointment passes Depper in turn 1 with no issues or contact. Giovanardi retires the now distinctive looking Focus possibly as a result of the impact.

Lap 6 Collard all over the back of Goff, can the young former Clio champion soak up the pressure like Plato in race 1? Further back a ridiculous looking incident at Clervaux sums up awful weekends for Warren Scott, Matt Neal and Rob Austin.

Turking ton and Shedden battling – this is the closest Shedden has been to the BMW all weekend but he has Morgan’s Mercedes behind him looking for an opportunity of his own.

Lap 8 Turkington pits! The BMW retires from 5th with a clutch problem, 2 wins and a DNF for the championship leader, will this be crucial come Brands Hatch in October?

Lap 10 Jackson is catching the Collard / Goff battle for 3rd and 4th while Tordoff, Shedden, Morgan, Smith and Foster all run line astern.

Lap 11 Shedden passes Tordoff and both Collard and Jackson put a move on the Vauxhall of Goff. Just behind this train of cars Alain Menu is catching up to the back of Jason Plato, lets see what happens here. 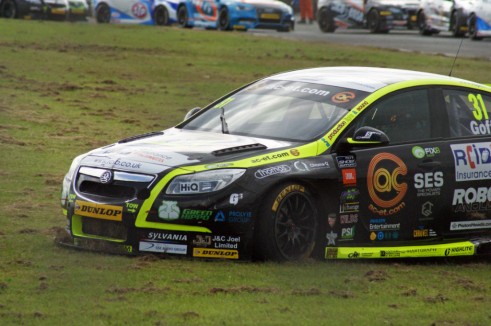 Lap 13 Shedden now passes Goff who has to take to the grass, Morgan and Smith now all over the Vauxhall.

Lap 15 Great driving by Shedden and Jackson as the pair battle for 3rd place, Jackson holds position, Plato is passed (again) by Menu.

Lap 16 Moment for Shedden but he keeps control as he continues to attack the Focus ahead.

Lap 17 A small tap from Shedden sees him pass Jackson for third.

Final Lap It’s all going off here as Goff, Morgan and Smith tangle but all continue smith drops back Goff continues with his rear bumper trailing, all three still battling hard to the end.

Flag Jordan wins and epic race 3 from Rob Collard, Shedden and Jackson finish 3rd and 4th with Morgan and Goff staging yet another photo finish this time Morgan takes the position by 1/1000 of a second from the Vauxhall driver. 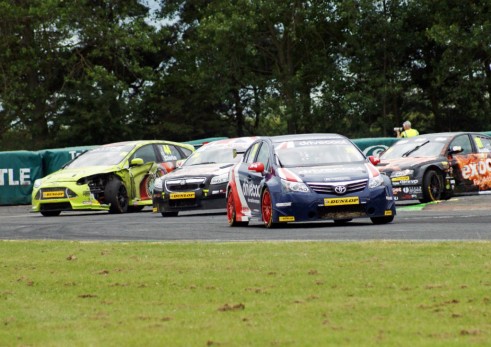 Foster 7th and the recovering Alain Menu passes team mate Smith for 8th on the final lap, Jason Plato rounds out the top 10. Abbot, Tordoff, Depper, and the Toyota’s of Lea Wood’s Houseman Racing and James Cole would be your final points scorers.

Although the positions of Shedden and Jackson would be reversed as a result of the Scots over exuberant overtake towards the end of the contest.

The championship now looks a little different following the non finish of Colin Turkington form race 3. Turkington still leads but by only 5 points from Shedden, Andrew Jordan, putting his bad week at Oulton Park behind him is now 28 points from the BMW pilot as a result of his race 3 win.

So we are now halfway through the season and 1 month away from the next round at Snetterton. How will the rest of the season pan out, can BMW be beaten? Will Plato and Neal get back into the title hunt? Will we see another different victor this season? Stay with us for all your BTCC coverage. 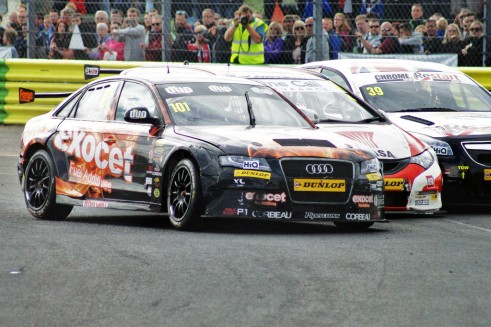