The BTCC finally got underway on Sunday with several thousand motorsport fans making the trip to the Kent circuit which – this time – was drenched in fabulous sunshine. A welcome change from the downpours of the finalé some 5 months ago.

The new track limits rule is designed to prevent drivers from cutting too much corner, or running to wide out of a corner to gain more speed, time or track position. This, I feel will cause a few controversies this season.

Qualifying saw a few surprises and showed just how competitive the 2014 grid is on equal ballast (qualifying and race 1 at the first meeting will pit all cars on equal base weight – the only time in the season that they will all run “equal”). 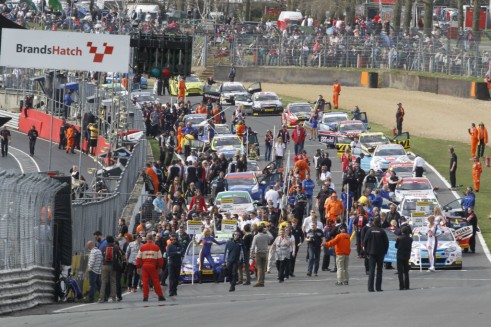 2013 champion Andrew Jordan took the pole from Jason Plato and Colin Turkington, with the Honda pair up next.

The first of the surprises came in 5th place with Tom Ingram – fresh out of the Ginetta G55 cup and making his BTCC debut – qualifying a brilliant 6th ahead of the VWs of Chrome Restart Racing pair Aron Smith and Alain Menu.

The magnificent 7th by contrast would start in a lowly 18th. 30 of the 31 entries started at Brands Hatch, only Dan Welch’s Proton was missing from the grid, Dan himself was present and intends to have the car on track at Donington.

Problems for both Lea Wood (Toyota) and Marc Hynes (MG) who both pit during the two green flag laps.

Lap 1 Lights out and the BTCC is go! Fast starting Turkington gets boxed in behind Jordan and Plato into turn 1, Jordan gets sideways but gathers it up, Alain Menu however is not so lucky and ends up on the grass on the inside of the corner. Neal takes Turkington for 3rd place and the end of the lap. 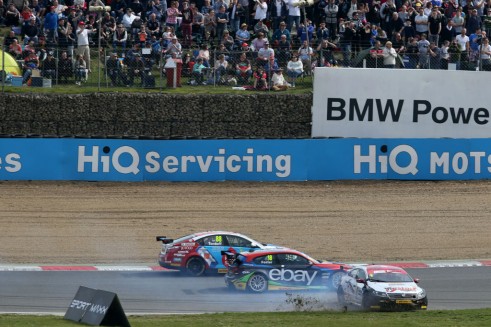 Lap 3 Mat Jackson gets a tap from Aron Smith going into clearways sending the Focus off and into the gravel, Jackson re joins albeit further down the order.

Lap 4 Battles developing down the order but everyone seems to be trying to get a true measure of one another, however Morgan’s Mercedes is being hassled by the BMW of Nick Foster and Dave Newsham’s Focus.

Lap5 Matt Jackson is up to 16th and battling team mate Fabrizio Giovanardi for the final point on offer.

Lap 7 Shedden starts to close in on Turkington.

Lap 10 Further down the order the Morgan / Newsham battle has been joined by Jack Goff and the two Airwaves cars, big battle for small points!

Lap 12 Half distance and Turkington obviously aware of the threat from Shedden starts to close on Neal bringing Shedden with him.

Lap 13 Plato ups his pace a little and starts to close on the leader Jordan.

Lap 14 Slight contact between Turkington and Shedden sees the Scot take 3rd, slight damage to the side of the BMW following the incident.

Lap 15 Martin Depper tries to get his Honda alongside the Toyota of James Cole at Druids, the inevitable contact ends Coles race.

Lap 16 Jack Goff has got through to 12th ahead of Morgan and Newsham.

Lap 17 Turkington is now being caught by Austin, Smith and Collard. 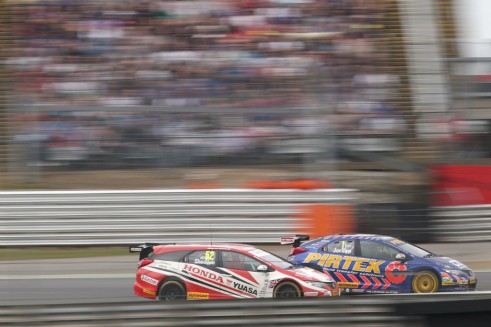 Lap 21 Collard and Turkington battle for position but Turkington holds on just! But for how much longer?

Lap 23 The leaders are catching the backmarkers, Chris Stockton, Aiden Moffatt and Rod Holland all get lapped but Plato has got a little closer to Jordan in doing so.

Final Lap Plato uses all the available track and a bit more in a bid to pass Jordan, but the reigning champion holds on to take the first victory of 2014. Plato and Neal join him on the podium while Shedden, Austin, Collard, Smith – who both finally passed Turkington, Ingram scoring a fine 9th on his debut and Sam Tordoff rounding out the top 10. 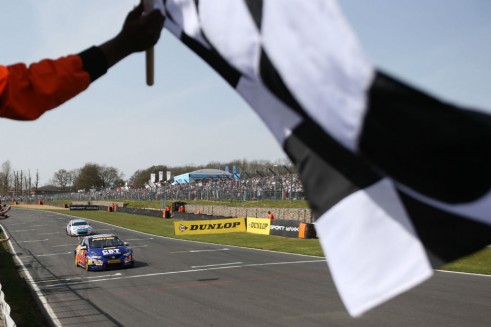 Following the race Martin Depper would be excluded for the James Cole incident and, Aron Smith was given a 5 place grid penalty for race two for the Mat Jackson contact, (which he would appeal) as a result he would line up 7th on the grid for race 2 as the appeal had not yet then been heard.

More problems on the formation laps as Rob Austin’s Audi seems to fail on the grid, the car is recovered to the pits but Austin will not take the start.

Lap 1 Lights out we’re racing again – apart from Plato! The MG seemingly dies in scenes similar to that of Austin a few minutes ago. Great start from Collard with the empty grid slot of Austin in front of him, contact in Paddock Hill Bend as Collard and Neal both get a bit sideways – looks like the contact also helped straighten the pair up! Tordoff and Smith have a little moment at Druids which sends the MG wide, while Chris Stockton in the Chevrolet ends race two early in the gravel bringing out the safety car. 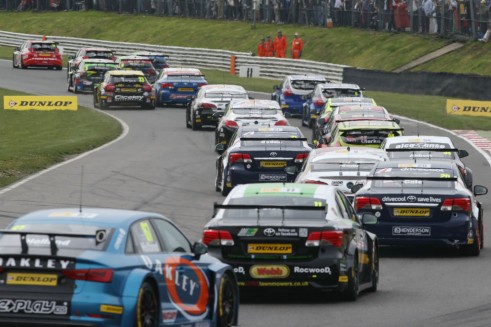 Lap 3 Strange scenes behind the safety car as drivers are not quite sure where they should be, Aron Smith is almost stopped on track and trying to let cars back through. At the front its 3 Hondas from 3 BMWs followed by the Mercedes of Adam Morgan in 7th. Plato has got the MG going again and is circulating at the back of the field.

Lap 5 Safety car in and we are racing again, Smith passes Giovanardi for 9th.

Lap 7 Shedden is catching Jordan for the lead while Foster is chasing down Neal’s Honda in 3rd.

Lap 9 Turkington in the 3rd of the BMW train passes teammate Collard, Adam Morgan also has a go at passing the BMW at Druids.

Lap 11 Was that a replay? Turkington passes Foster in almost a carbon copy move of the one he put on Collard a few laps previous. Plato has moved into 17th.

Lap 12 Fastest lap of the race so far goes to Sam Tordoff, currently in 12th place, this is going to be an unbelievably competitive season.

Lap 14 Turkington all over Neal going through Paddock Hill Bend and into Druids, fantastic close racing from the two former champions.

Lap 20 The Ballast free BMW of Turkington is all over lead pair, 7 laps to go, who will win. Safety car for the Depper / Hynes incident! 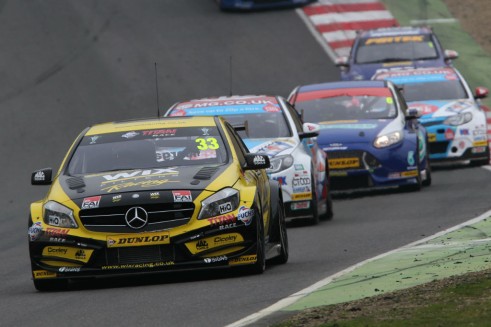 Lap 24 A four lap sprint to the flag NASCAR style, everyone through the restart , Jordan pulling a gap but Turkington all over Shedden. 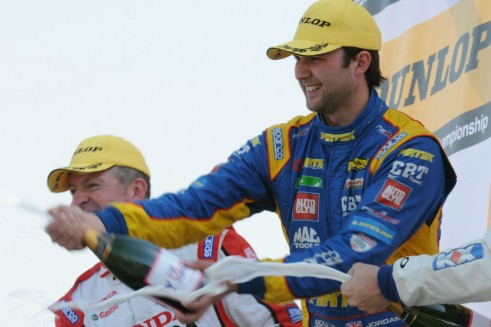 Final Lap No change at the front and Andrew Jordan takes his second win of the day from Shedden and Turkington. Neal, Foster, Collard, Smith, Morgan, Ingram and Giovanardi complete the top 10, but who will take the reverse grid pole for race 3.

Before we start race 3 a few points. Aron Smith failed in his appeal and had to serve a 5 place demotion followed by a second penalty for yellow flag safety car confusion at the start of race 2.

Rob Collard would start the race from the pole on the Dunlop soft tyres, as would the vast majority of the field. This could make the final quarter of the race very interesting. Marc Hynes would also be excluded from the result following his clash with Depper.

The grid for race 3 saw Foster, Neal, Turkington, Shedden, Jordan and the rest line up behind Collard. 3 fast, rear drive BMWs on the front two rows, this should be good.

Collard leads the field round for the two green flag laps, this time there are no issues on the way to the grid. 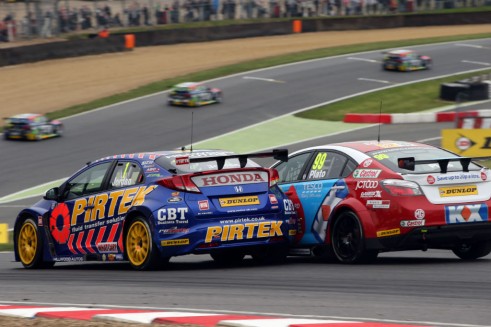 Lap 1 Lights out and for the final time today BTCC is go, as expected all 3 BMWs occupy the lead positions at Paddock Hill Bend, chaos at Graham Hill bend with Hynes and Depper having an almost identical incident to the one in race 2. Glynn Geddie also goes off.

Lap 5 Turkington all over the back of Collards BMW, Foster and Aiden Moffatt under investigation from the clerk of the course.

Lap 7 Turkington passes Collard after a fantastic battle between the two team mates, Aiden Moffatt receives a drive through penalty.

Lap 9 It’s calmed down a little, maybe trying to save the soft tyres for a final push to the finish.

Lap 11 Goff and Ingram battle for 10th and 11th with Menu and Newsham getting involved too. 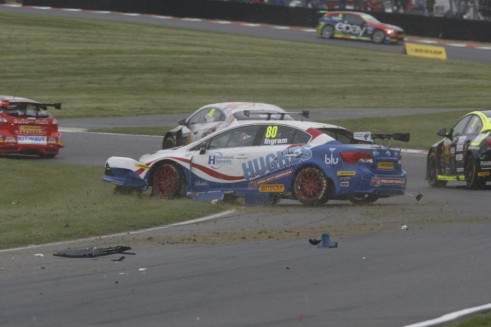 Lap 12 Contact! Oh my word, Menu tags Ingram and sends the Toyota into the barriers on the exit of Graham Hill bend. Debris all over the track, safety car deployed.

Lap 15 Racing again Collard looking to take the fight to his teammate for the lead and victory.

Lap 17 The two remaining MGs battle hard with Plato getting the better of Tordoff, Adam Morgan also passes Tordoff, his soft tyre seeming not as good as some of the other cars around him.

Lap 19 Mat Jackson – on the harder tyre – is now on the back of Morgan having passed Tordoff, big fights for the championship points!

Lap 21 Andrew Jordan is dropping as his tyres pass their best.

Lap 22 Plato now on the back of Matt Neal.

Lap 24 With three laps to go it’s Turkington from Collard, Neal, Plato, Shedden and Jackson followed by a mighty battle for the smaller points involving Newsham, Menu, Goff and Adam Morgan, Rob Austin – who started almost last is not far behind either!

Lap 25 Neal and Plato are all over the BMW of Collard for 2nd but who will get it come the flag?

Lap 26 Both Neal and Plato pass Collard, Menu – also on the harder tyre – gets past Mat Jackson and is straight on the back of Shedden, and past by the end of the lap!

Final Lap No dramas at the front Turkington takes his first victory of the year from Neal and Plato. Collard, Menu, Shedden, Jackson, Goff, Newsham, Morgan, Austin, Tordoff, Jordan, James Cole and Hunter Abbott were the points scorers but one must feel a little bit sorry for Warren Scott, tagged in the final corner while looking to score points he ended up in 23rd place.

In the championship Jordan leads Neal by 2 points with Turkington, Shedden, Plato and Collard all within a podium score of the 2013 champion.

This is going to be a vintage season. BTCC its good to have you back.

All images courtesy of – btcc.net