Ok I know that’s an awful headline… The BTCC made its final stop on the 2013 calendar at Brands Hatch, where it all began 6 months previous only this time using the majestic Grand Prix circuit as opposed to the Indy loop.

While the 5 championship challengers would take most of the spotlight this weekend, there were a few amendments to the line ups. Andy Neate and Jeff Smith would both be absent due to illness, while Will Bratt would also miss out. Jake Hill – having made his BTCC debut earlier this year in the S2000 Focus now got a chance to taste the NGTC machinery of Rob Austin Racing, sporting a fancy new livery too, following sponsorship from Exocet Fuel Additives. 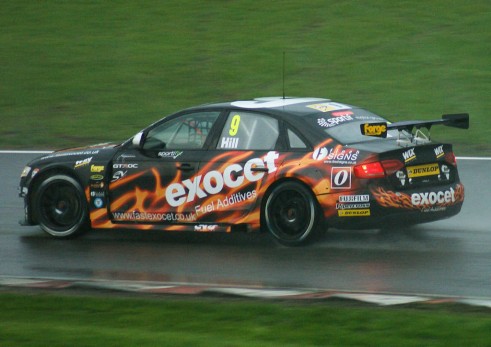 Former VW Cup racer Tom Barley would become the latest driver to sample a Team HARD Insignia, and Shaun Hollamby would give his Golf one final outing in the S2000 class. Matt Neal would be racing, despite his finger injury, a call made so late the Yuasa racing had former champion Alain Menu on standby!

Neal’s weekend didn’t start well following a huge crash at Paddock Hill Bend during qualifying, which brought out the red flag and left him way down the grid for race one. Not as far back as Aron Smith however, he had a big accident in free practice which saw him miss qualifying altogether while the Motorbase team repaired his Airwaves Ford Focus.

Qualifying however belonged to one team, MG Triple 8 with Jason Plato ahead of team mate Sam Tordoff, series leader Jordan was 3rd ahead of Gordon Shedden, Adam Morgan in his last race in the Toyota before swapping to an A class Mercedes for 2013. Colin Turkington in the eBay BMW, Tom Onslow-Cole in the Airwaves Focus, Frank Wrathall’s Dynoject Toyota Avensis, Rob Collards BMW 1 Series and an impressive NGTC debut for Jake Hill’s Audi A4.

Although qualifying had been dry Sundays races were anything but!

Plato gets a great start and leads from Shedden as they go into a damp Paddock Hill Bend, Turkington spins! The pack take avoiding action but poor Nick Foster – Turkingtons team mate cannot miss, and the two BMWs hit head on! Into retirement and in Turkington’s case, out of the championship chase, 4 now race for the title. 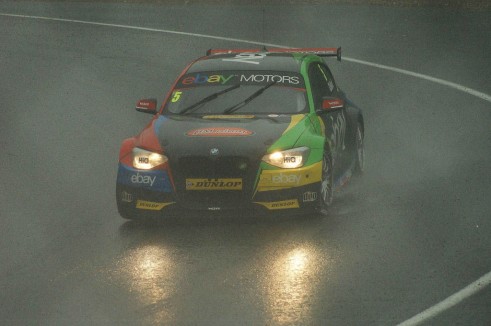 Further round the lap Wrathall also pulls off the circuit in his Toyota. Neal has had a good start and is already up in the top ten. The weather is going to be a big factor today! It would seem as Austin crashes at Paddock bringing out the safety car, an action packed first few laps come to an end as the pack take a short break while the Audi is removed. Order early on is Plato, Shedden, Tordoff, Jordan, Onslow-Cole, Collard, Morgan, Neal and Hill. 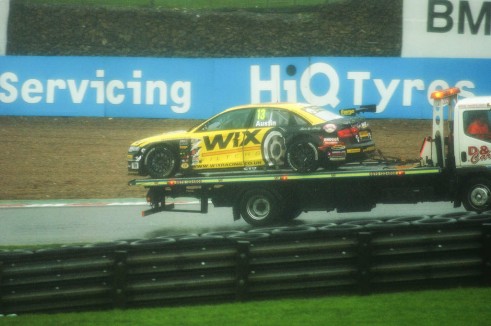 Safety car in and racing resumes, this time all get through Paddock cleanly. Ollie Jackson in the Speedworks Toyota tangles with Hill’s Audi at Graham Hill bend, relegating the Audi driver to the back of the pack. Warren Scott also retires, going off at Surtees.

At the front Onslow-Cole is not worried about the title battle as he passes Jordan for 3rd, while just behind them Matt Neal has worked his way up to 6th by passing the BMW of Collard. The title contenders are now in positions 1,2,5 & 6. 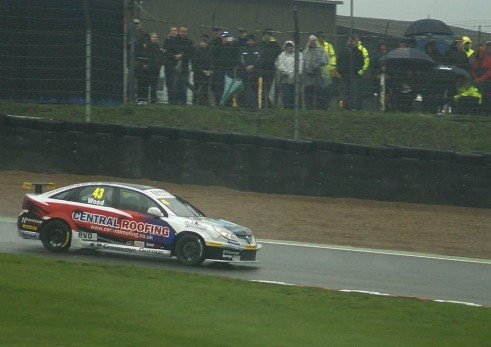 While the action at the front calms down, in the midfield there is plenty going on. The Airwaves Focus’s of Jackson and Smith battle for 9th and 10th (and inter team bragging rights) and in the S2000 class Lea Wood spins his ex Andrew Jordan Vectra, promoting Shaun Hollamby to the class lead.

Up the front Plato takes victory from Shedden and Tordoff. Onslow-Cole hangs on to 4th while Jordan and Neal take 5th and 6th. Collard, Morgan, Jackson and Smith round out the top ten, Hollamby takes the S2000 class in his Golf, a great moment for the local driver and it is hailed by circuit announcer Alan Hyde as Orpington’s greatest sporting moment!

More Importantly the championship standings show that Jordan now leads Shedden by 39 points, with Neal and Plato still in contention. Jordan has however wrapped up the Independent championship, the title he won last year with his 4th place in Race 1. Could he take the main in Race 2?

The grid lined up as they had finished Race 1, with Plato on pole from Shedden and the rest, the rain, which had eased during the previous race started coming down hard just as the pit lane opened…not that anyone would have even thought about a set of slicks today.
As the race starts Plato gets another great start and leads into Paddock Hill Bend, Shedden is turned around almost exactly like Turkington a few hours before, but unlike Turkington (and unbelievably) no one hits him! The Scot drops down the order – his title hopes looking a little slimmer than they had done 10 minuets previous. 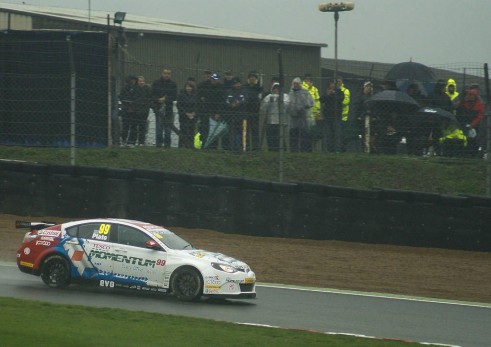 More drama as Jordan retires! The series leader records his first DNF of the year, swerving to avoid Collards spinning BMW he is hit by Neal and damages his rear suspension. Neal pits with a puncture and re joins at the back of the pack, not a good few laps for Honda drivers.

Plato, up front however leads with his team mate Tordoff holding station, acting as rear gunner behind him, a sight we have seen many times this season but ultimately reliability woes and bad luck have prevented Plato from being right at front consistently this season. Back on track Morgan has a moment at Paddock Hill Bend, while Austin pits his Audi and comes out at the back of the field. Morgan re joins in the midst of a battle between, Goff, Shedden and Hill and Tom Barley ends his second BTCC race in the Druids gravel trap – as many a great driver before him have. 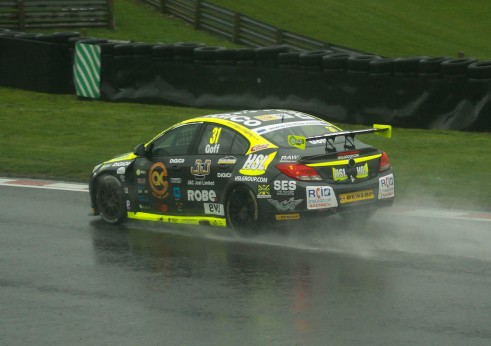 Championship update, Jordan out, Neal out of the points, Shedden fighting for small points, Plato is in 1st, race 3 is going to be very interesting! Two MGs lead three Focuses with Newsham, Goff, Shedden, Morgan and Hill making up the top 10. Although Onslow-Cole is struggling at the back of the Airwaves train, and is soon passed by the bulk of the chasing pack. At the flag again it’s Plato, this time from Tordoff and Matt Jackson taking the final step on the podium. Newsham passed Smith for 5th while Goff finished ahead of Shedden for 6th with Morgan, Onslow-Cole and Wrathall behind.

There was to be more drama, as Neal bowed out of the title race his Honda caught fire on the way back to the pits, amazing considering how wet it was!

So what does that do for the championship? Well, Jordan now leads Plato by 15 points and Shedden by 20, there are 22 points up for grabs in race 3. Jordan will start from the back of the grid, Shedden in contrast and by virtue of the reverse grid draw will start from pole.

Shedden lines up on pole in front of Jack Goff in his Team Hard Insignia. Smith, Newsham and Jackson would line up next, followed by the MGs, both Shedden and Plato know they have to win to even have a slight chance of taking the crown. Jordan knows that a decent points finish will be enough. 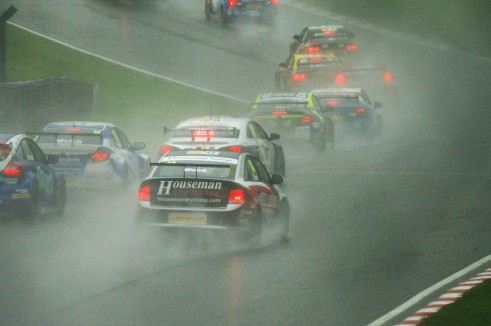 The lights go out and we are racing for the final time in 2013! Shedden gets a great start leading from Smith, Goff and Jackson. Paddock Hill bend this time is clean, but Tordoff gets spun on the exit of Druids – while Goff passes Smith for 2nd. Newsham gets overtaken for 4th by Jackson, the Focuses working really well at Brands. Goff, however is catching the leader Shedden, will there be a final twist to the championship yet?

Championship update. Jordan moves up to 15th after a frantic first few laps, with Plato 6th and Shedden leading, 13th would be good enough for Jordan to take the title. Should Plato win then 8th would be the target. Jordan sets the fastest lap and is up to 13th having passed Hill. 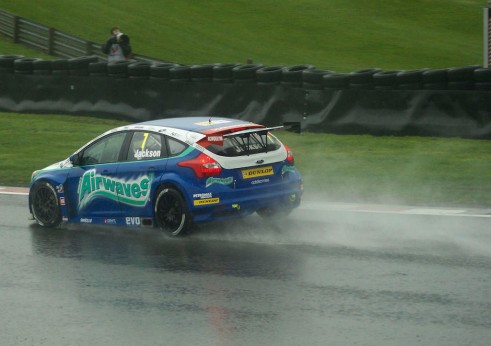 Goff is all over Shedden who has a slide at Graham Hill Bend. Jordan is flying as he’s up to 10th ahead of the Toyota of Ollie Jackson and set another fastest lap, Plato is fading and has been passed by Turkington for 6th. The train of cars headed by the MG are being caught by the Blue Honda Civic. 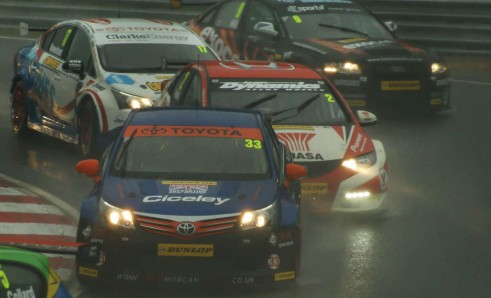 In non championship related news Turkington was making the best of a bad weekend by moving up to 4th and battling with the Fords and Toyota’s of Aron Smith, Adam Morgan and Dave Newsham. Jordan has moved up into 8th just behind Rob Collard, as Plato fell back yet again behind both him and Onslow-Cole.

At the front Goff has dropped off the back of Shedden leaving the Scotsman to take the final win of the day and the 2013 season from Goff – claiming his best ever BTCC finish! Jackson, Turkington, Newsham, Morgan, Collard and in 8th position the 2013 British Touring Car Champion Andrew Jordan! 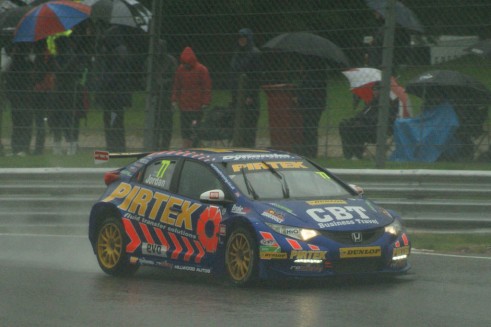 The weather may have been lousy but nothing was going to rain on his parade.

The emotion seen on the footage from inside the car as he returned to the pit lane was plain to see, “I’m just one part of the puzzle” he claimed signalling that the championship was well and truly a team effort. The joy once in the pit lane was great to see, as Shedden, Plato, Jackson, Neal and many other drivers, team members, personnel, journalists, friends and family all congratulated a very worthy champion.
The British Touring Car Championship for 2013 is over, all too soon as far as I’m concerned! This season seems to have flown by and I reckon the winter will be a long one prior to the scream, squeals, backfires and panel bashing that 2014 has to bring.

Can Jordan retain his title, Can Matt Neal win his 4th? Plato his 3rd? maybe it’ll be another new champion, Matt Jackson? Dave Newsham? Who knows, one things for sure we will all be watching closely next March when the BTCC rolls back into Brands Hatch.