We Break for the border with Great Escape Classics!

Classic motoring isn’t for everyone. Often cold, mostly slow with a handful of breakdowns thrown in for good measure. But there are ways of sampling such fancies without committing a few thousand into what will ultimately be a bottomless pit.

Great Escape Classics allow you to hire out aged motors on a daily basis, perfect for a trip up memory lane for Dad’s 60th, but they also run a number of road trips throughout the year.

We headed up to Redditch to make a break for the border.

Starting off at Great Escape’s lock up where we enjoyed a cuppa and much needed bacon roll. The car park was swamped with classic motors, all ready and eager to go. The mix was eclectic but mouth-watering, from a beasty V12 Jaguar XJ-S to a weedy and rather cold looking Morris Minor drop top, there was plenty of choice. 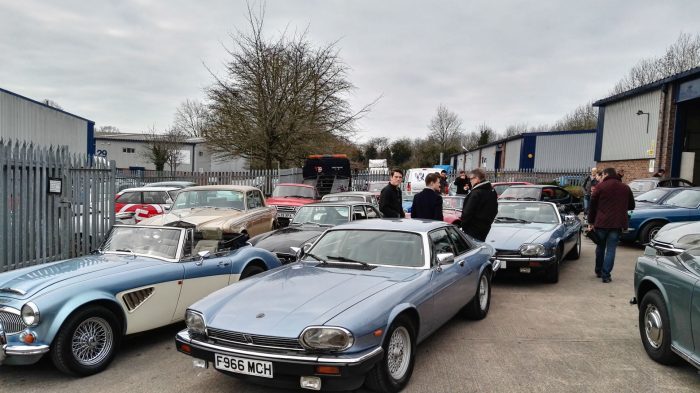 Briefing done and the keys in a Morris hubcap routine ensued, no this wasn’t a seedy parlour game but how you are allocated your first steed of the day.

Last to pick and there were two keys left. I picked a key and looked at the keyring…it said “Morris”. Quickly putting it back I take the next one, anything has to be better than a freezing cold convertible Morris on this chilly March morning.
I look at the next keyring – Jaguar. I thought I may be driving the Mark 2 once again as we Great Escape Classics. Thankfully we were in the XJ-S coupe, heating and all.

Setting off we follow the Austin Healey…more on that car later. 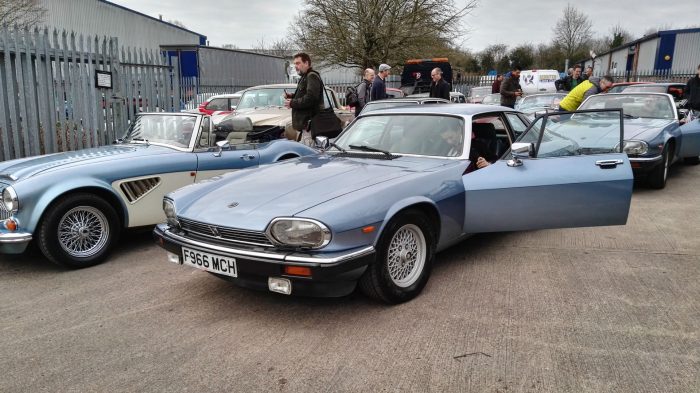 With a 5.3 litre V12 engine at the mercy of your right foot I was expecting this to be a bit of a hoon. But with its auto ‘box that 285 BHP was rather more sedate. It had great big globs of power, surging once you plant your foot and the gearbox catches up.

It wafted down the lanes with ease, only slowing to check its gargantuan width when passing through the smaller villages. 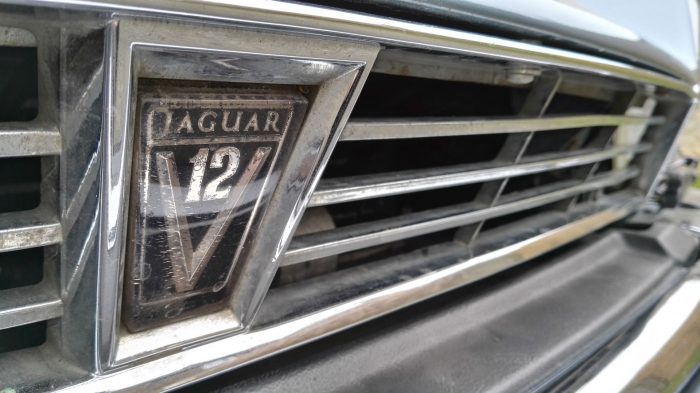 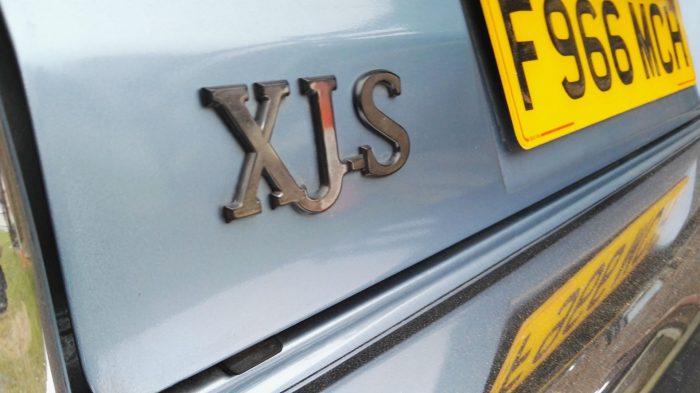 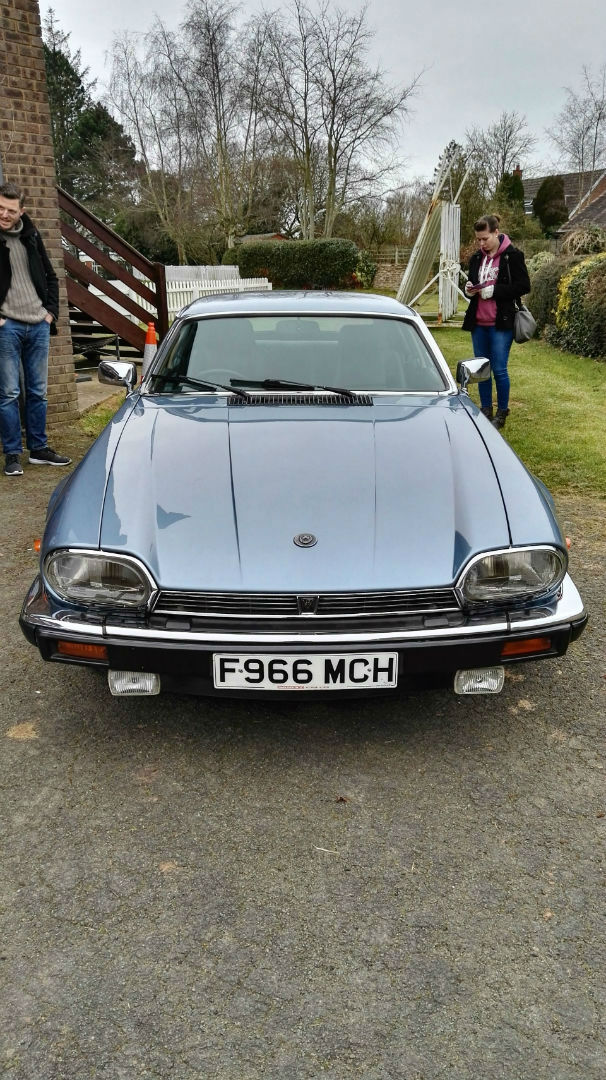 Inside is pure 80’s yuppy, but the build quality is superb. There are no squeaks or rattles, even in a car this old. The leather upholstery still looks fresh and the walnut trim is to die for…if you like that sort of thing.

Eating up the first 30 or so miles was a doddle, and before we knew it we were at the changeover point. Hubcap out, keys picked. This time it’s not so great. The Healey beckons, and the weather is no warmer. 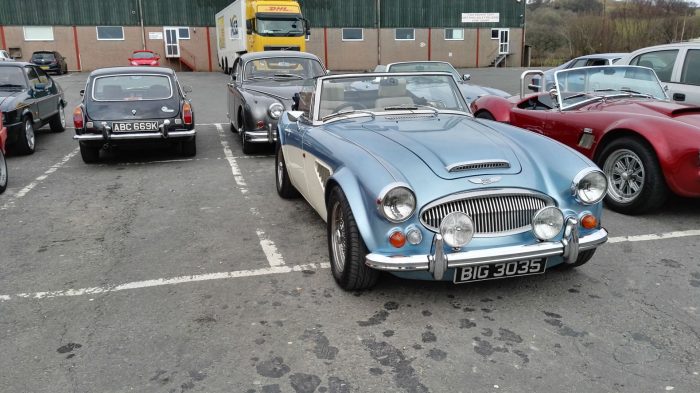 Jumping in and firing up the 3.9 litre V8 I give it a rev, the HMC rocks side to side on its axles a little. This machine is one of 187 Healeys made as continuation car in the 1990’s, this one being one of the very last a ’99 model.

Setting off I notice something a little odd.

The Healey keeps accelerating even when you are off the throttle. It isn’t bad at first, I just thought it was the revs running a little high so thought nothing of it.

But as the miles ticked over it became worse, so much so that the revs would red line when dipping the throttle. In the end I had to be constantly on the brakes to adjust the speed.
Ducking out of the group I pull over. A minute or two later the chase car is behind us in a lay-by jumping to the rescue. 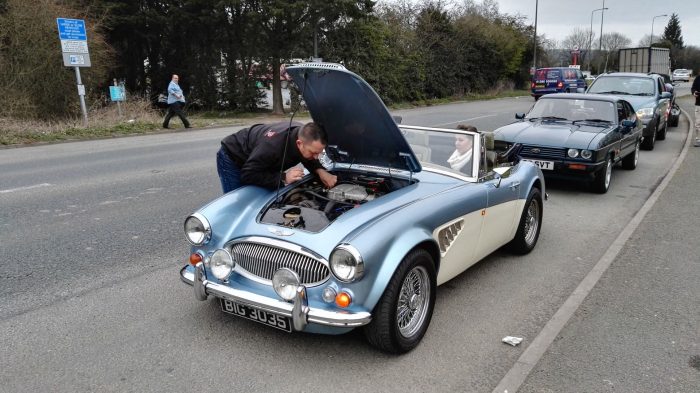 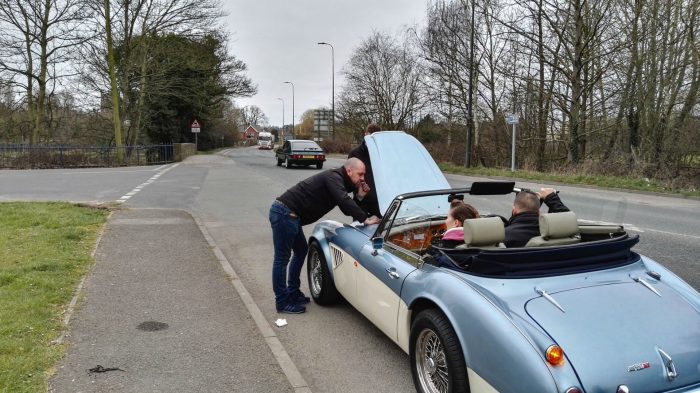 It turns out that the throttle cable had become caught and was sticking. Some WD40, some loosening and a little wiggling later we were back on the way.

Ducking down to stay out of the wind the Healey feels like a classic in all aspects. The running gear beneath is newer, but it feels as if it could be a 50’s or 60’s car. The speedo bounces around so you are never precisely sure what speed you are doing, the heating just about works and the window wipers are there for show I swear.

Thoroughly numbed through we get to the lunch stop just in time before hypothermia sets in. Yup, I knew I should’ve brought a hat with me. 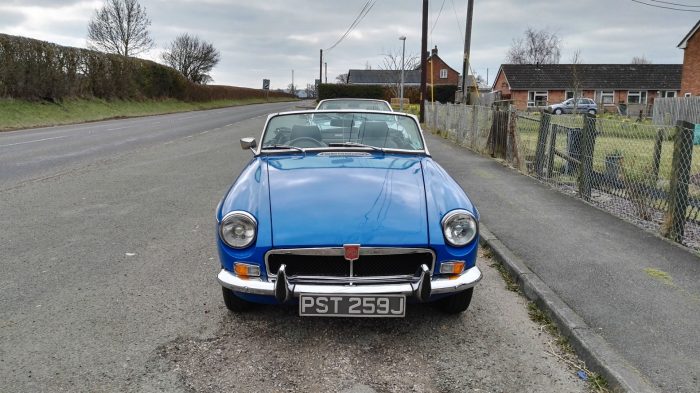 After thawing out for half an hour I step outside to take some pictures of our noble steeds. By the time I go back in all the cars have been handed out and there is one key left… Great, another convertible.

This time it’s the MGB Roadster.

With the dread of another cold slog I push on. Through winding valley roads and into Wales the weather stays bracingly fresh…but after the misery of another drop top I actually started to find rhythm with the little MG.

It actually had some guts to it, it gripped well and felt suitably nimble for something roughly 40 years old. 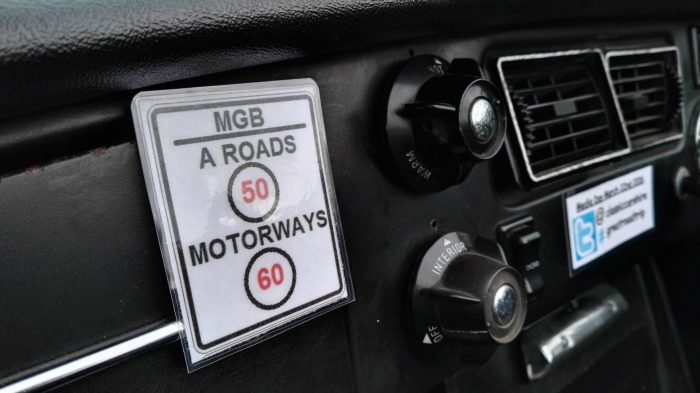 Strangely there were some speed limits stuck to the dashboard, no idea what they were they for as this thing flew. The brakes were even confidence inspiring, the little MG was proving to be THE drive of the day! 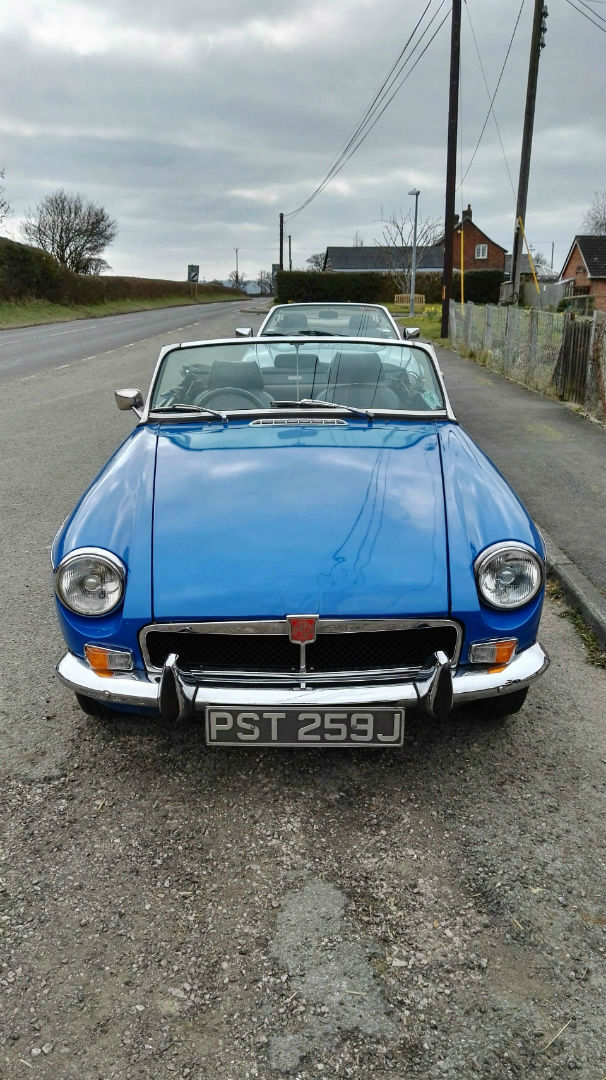 Numb to the core and another 30 miles down we stop off at the next checkpoint to change cars. Begging Graham (Great Escapes owner) for something with a roof, preferably the Ford Capri.

My prayers are answered

I had wanted to get behind the wheel of two cars all day, the Capri and the Quattro. The Capri mainly due to my Dad having some sort of fascination with them, he had them from a mark 1 but never more powerful than a 1.6 – a 1.6 is all the power you ever need you see. 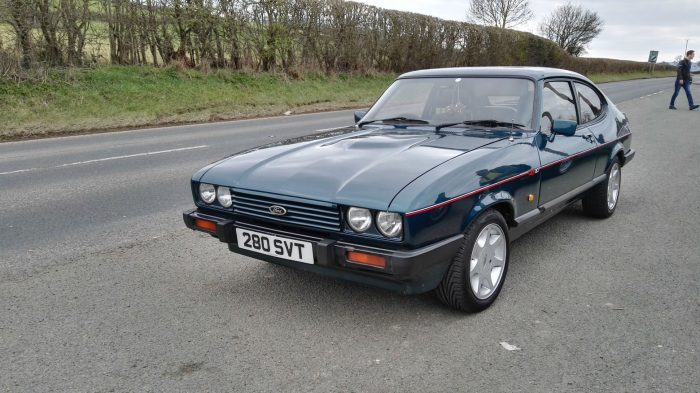 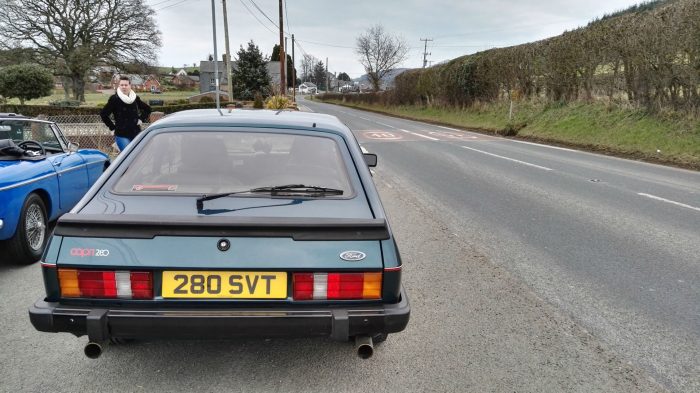 This Capri was a rather beefy 280 Brooklands, the halo car of fast fords back in the day. Its 2.8 litre V6 makes a modest 160 BHP – warm hatch territory by today’s standards. Mated with a four speed manual it has plenty of torque, power delivery feels smooth but that rear diff is a little noisy at speed. 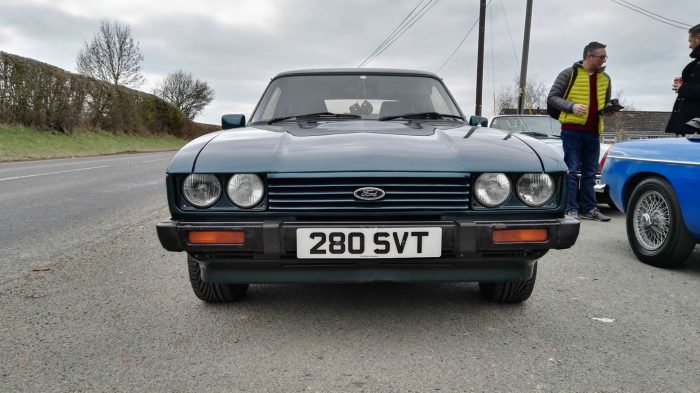 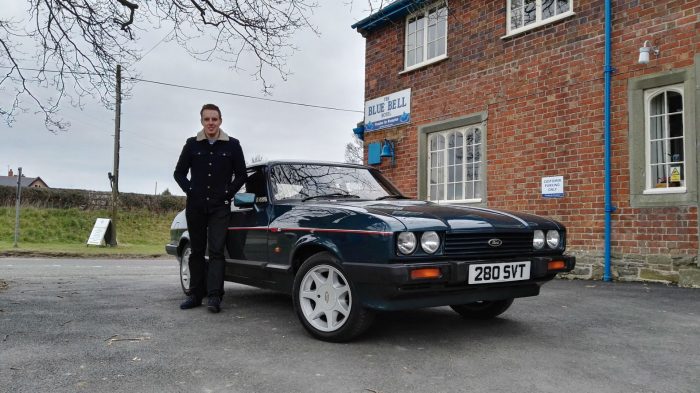 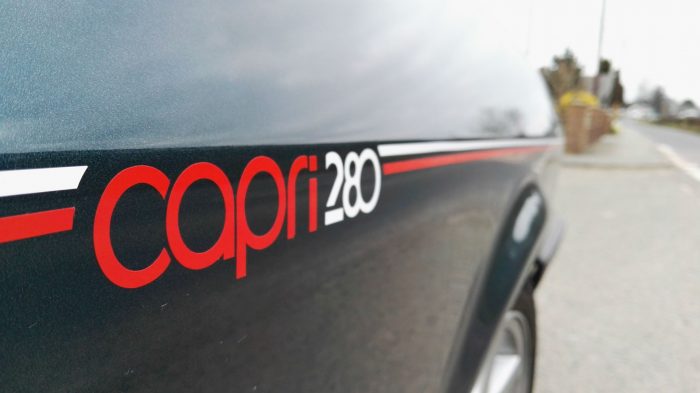 Another stint under my belt it was time for the drive home.

The Quattro was calling.

Pretty much the 80’s poster car, the all-conquering world rally behemoth with its diff locked four wheel drive. But…it only has 197 BHP, although this is coupled with 285 Nm of torque it still gets to 62 in 7.1 seconds. 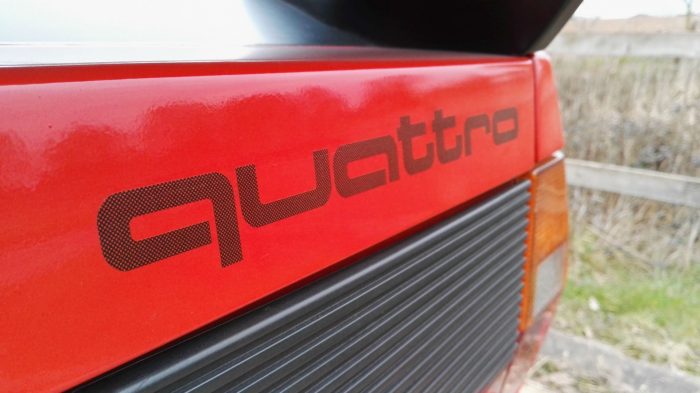 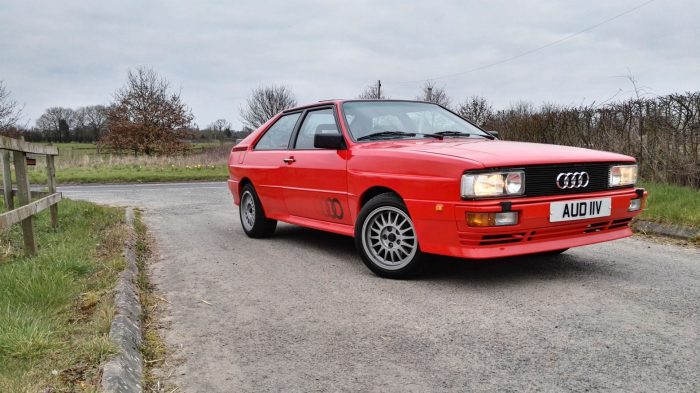 The current quickest FRONT wheel drive car around the ‘ring will get to 62 in just 5.8 seconds, so yes the Quattro was fast for its time, but now when my current hot hatch can beat it comfortably it feels a bit…tame. A likely scenario of “never meet your hero’s” at play. 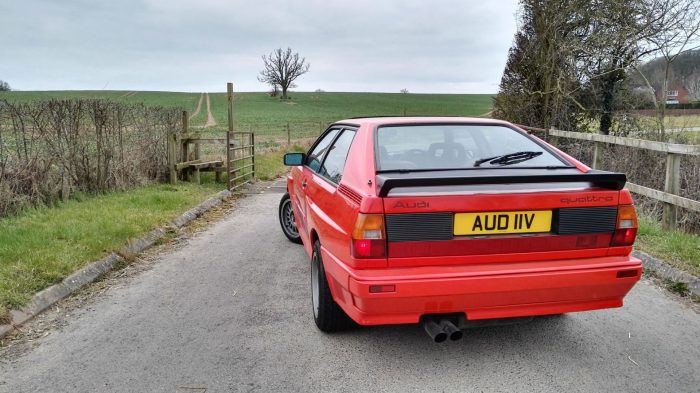 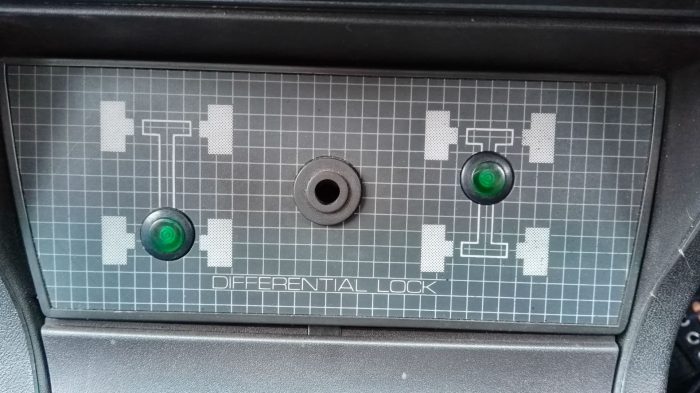 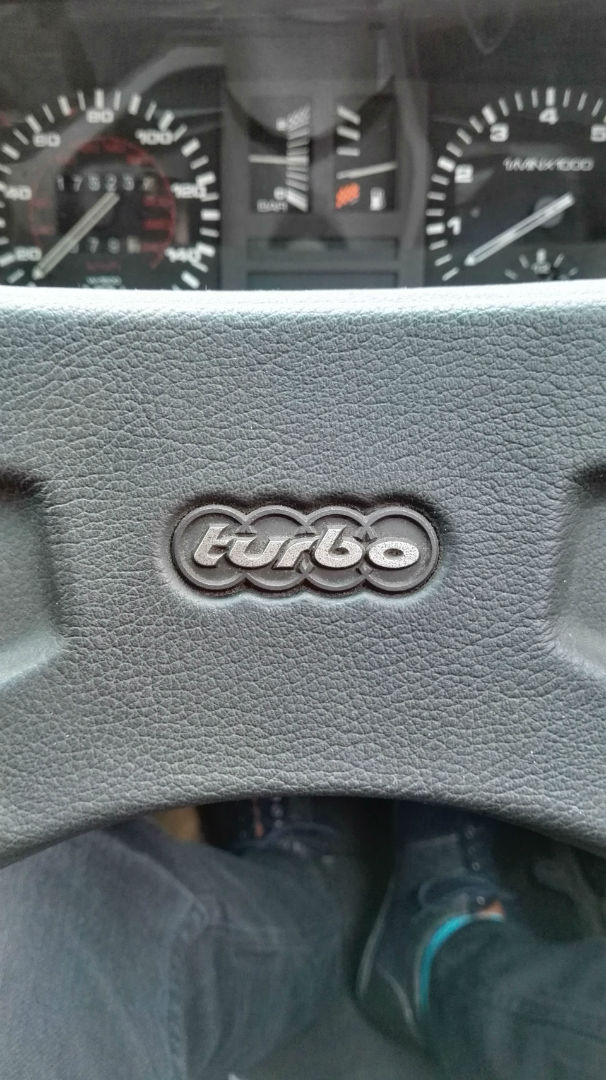 Arriving back at base the Quattro was a fun drive, not particularly rapid, nor awe inspiring. It handled well and you could see how back in the day it would’ve been a fearsome bit of kit.

Giving the keys back and saying thanks for a wonderful day the rest of the cars trickle in. 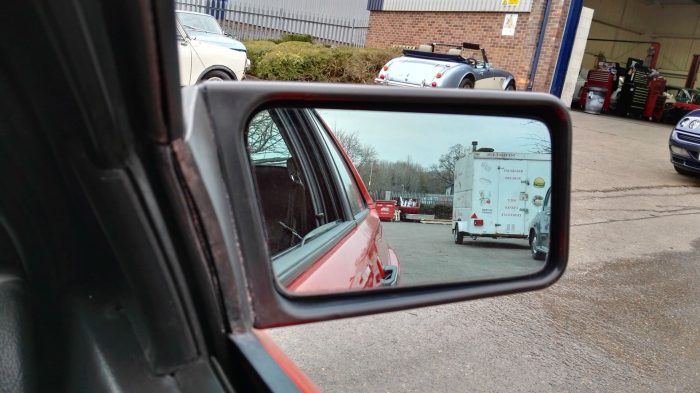 Day’s like this are a truly wonderful experience for any petrol head. To experience some of your childhood dream machines first hand is awesome, to get behind the wheel of a car your father used to drive is awesome, and to sample such a breadth of classic vehicles in one day…you get the picture.

Check out Great Escape’s website for their latest rally dates and deals – here. 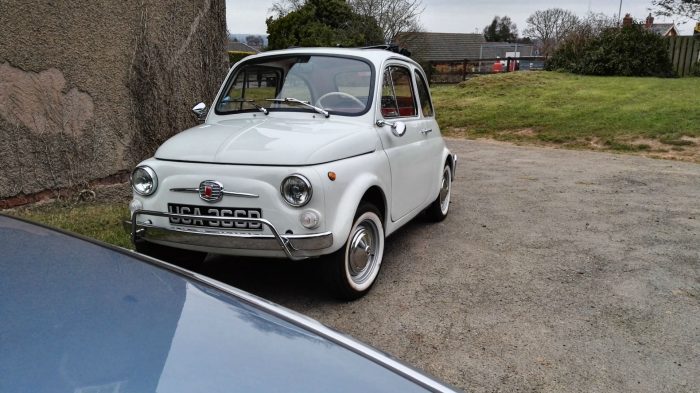 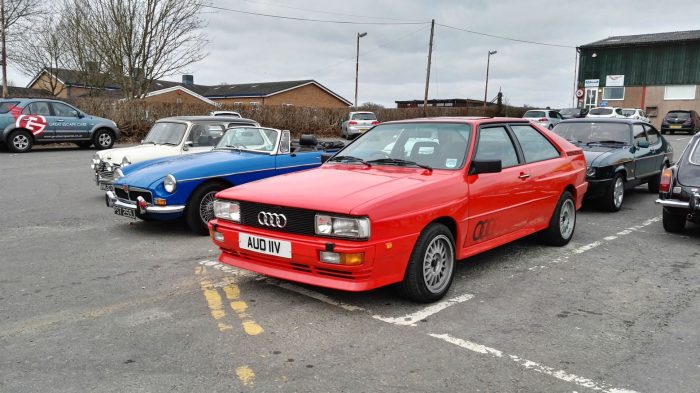