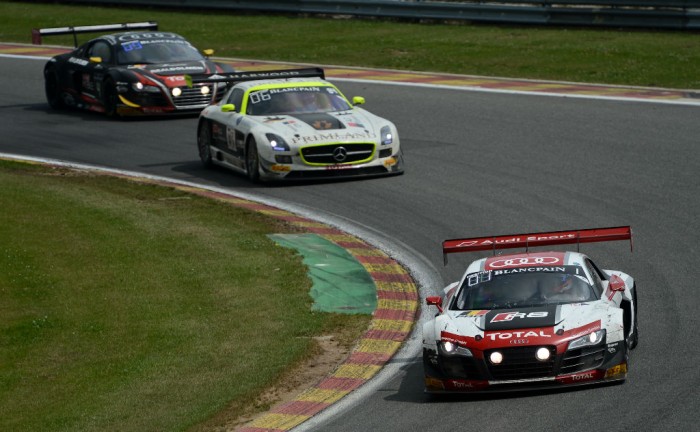 Audi claimed their third 24 hours victory of 2014 after the WRT R8 of René Rast, Laurens Vanthoor and Markus Winkelhock passed the Marc VDS Z4 with just 15 minutes to go to take victory at Spa.

Rast had exited the pits just over 20 seconds down on the BMW piloted by Dirk Werner after the Marc VDS crew had chosen not to take fresh tyres at the last pit stop.

The German hunted down his fellow countryman at up to four seconds a lap before passing him as they exited La Source with just a handful of laps remaining.

The #1 car had lead large amounts of the race, swapping positions hour-by-hour with the #77.

But the Z4 appeared to be on course for victory, thanks to superior brake wear and fuel consumption, however issues with the ABS and traction control slowed Werner and team mates Lucas Luhr and Markus Paltalla.

Team principle Bas Leinders threw the dice with the late pit stop to give them a 20 second lead with 40 minutes to go.

But the victory was to go to WRT as Rast would catch, pass and pull seven seconds clear of the ailing Z4 for Audi’s third Spa 24 Hours triumph in four years adding to their victories at Le Mans and the Nurburgring.

Audis also took third and fourth with Christopher Mies, Frank Stippler and James Nash took the final podium spot, a lap down on the top two; and the Stainteloc R8 shared by Stephane Ortelli, Edward Sandstrom and Gregory Guilvert was a further lap behind.

Bentley, winners of the last two rounds of the Blancpain Endurance Series, finished outside the top ten after running into early dramas.

The #7 car of Steven Kane, Guy Smith and Andy Meyrick finished 13th after a damaged brake line halted early progress and they were further held back by an ECU change.

In Pro Am the AF Corse Ferrari 458 Italia of Andrea Bertolini, Marco Cioci, Niek Hommerson and Louis Machiels came out victorious after an absorbing battle with the #79 Ecurie Ecosse BMW.

Racing hard Alexander Sims was closing down the Ferrari at three seconds a lap, but braking issues in the closing minutes called off the hunt and the Z4 finished 23 seconds behind.

They were followed home by the second AF Corse Ferrari of Steve Wyatt, Michele Rugolo, Andrea Piccini and Aussie V8s legend Craig Lowndes, who was making his Spa 24 debut.

Their victory came after the championship leading #458 of GT Corse by Rinaldi limped out of the race early on.

But the race was somewhat overshadowed by four massive accidents that left four drivers in hospital during the first few hours of the race.

The race was forced to spend time behind the safety car four times before race control brought a halt to proceedings just before a quarter distance following a huge shunt for Marcus Mahy and Vladimir Kogay.

Both drivers were airlifted to hospital after the wreck, which left the pair of Ferrari 458s almost unrecognisable and strewn across the track near Blanchimont.

Mahy was put into an induced coma but was woken up late on Sunday and reported to be able to feel his limbs.

That crash came after the intervention of the pace car on three consecutive times.

Then, just seconds after going green, Tim Mullen’s Von Ryan McLaren hit the wall at the first left-hand kink at Blanchimont, his safety car having only left the track at Stavelot.

Again a lengthy clean up was required and Mullen was taken to hospital, thankfully only as a precaution.

But when the remaining drivers were released for a second time after six laps Karim Ojjeh also lost control of his McLaren, this time at Radillion.

Thankfully Ojjeh walked away from his #15 Boutsen Ginion car, but again the hard working marshals were required to carry out running repairs to the tyre barriers.

Again they were back at full speed three laps later, only for a spinning car at the top of Radilion to cause chaos.

The incident took out Andrew Howard in the Beechdean AMR Aston Martin V12 Vantage, Andrew Danyliw in a AF Corse Ferrari, Tim Muller in a Rinaldi Ferrari and Alex Demirdjian in the second of the Boutsen McLarens.

Howard was also taken to hospital for precautionary checks and was released later that day.

The safety car would be seen again later in the race but in the second half it settled into a calmer rhythm.