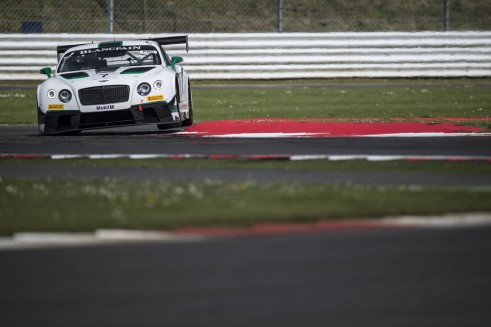 Bentley fought back from a controversial drive-through penalty to clinch the their first GT3 victory in the Blancpain Endurance Series at Silverstone.

The #7 Continental GT, in the hands of Guy Smith, Andy Meyrick and Stephen Kane, had looked down and out when Smith was handed the drive through after being adjudged to have overtaken under yellow flags.

Smith would later be adamant that he had not passed under yellows and admitted to being “mystified” by the penalty.

But a stunning stint from Meyrick in the second hour saw the Englishman move from fifth to second by the time he handed over to Kane. 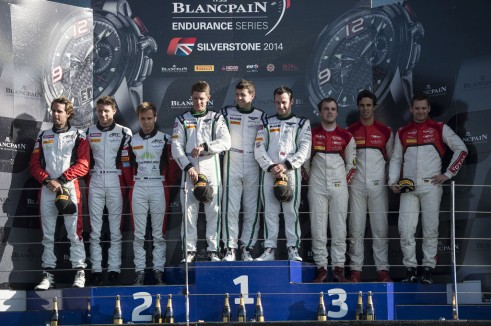 When the safety car intervened with 40 minutes to go the former BTCC racer was able to close the gap to the leading #99 ART McLaren, piloted by Andy Soucek, to just six seconds.

Kane quickly dispatched the four lapped cars between he and Soucek and with 16 minutes to go had closed the gap to less than a second.

Soucek ploughed the Mp4-12C slightly wide at Luffield a lap later, allowing Kane to poke the nose of the Bentley inside and the Continental was able to power past through Woodcote.

Kane would move away from Soucek in the closing minutes to cross the line comfortably clear. 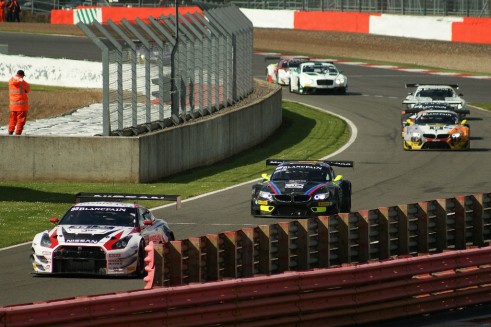 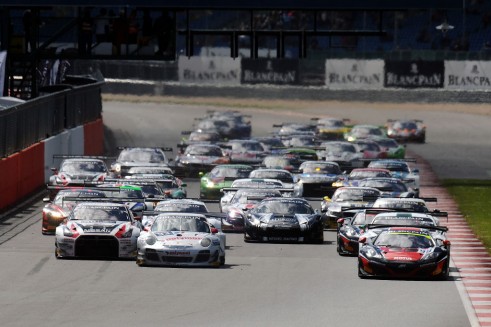 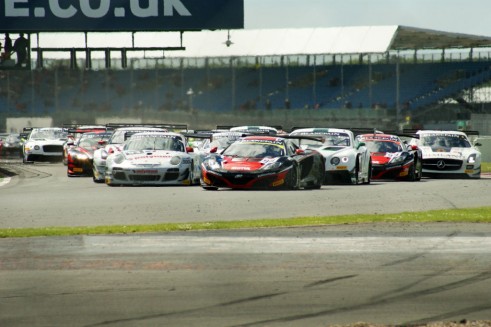 The ART McLarens had lead the field for most of the race after pouncing on pole sitting Pro-Am #93 Almeras Porsche 911.

It had been the sister #98 of Alvaro Parente, Gregoire Demoustier and Alex Premat at the front in the first stint, the Portuguese building a healthy lead over team mate Kevin Estre.

But Demoustier was unable to match that pace, first losing the lead to the #99, now in the hands of Kevin Korjus, then being hunted down by the charging Meyrick.

Handing the car over to Premat the #98 would again tumble down the order when the French former V8 Supercar driver lost control on the restart following the late safety car.

That mistake would be pounced upon by the Sainteloc R8 of Gregory Guilvert who looked set for the podium with 10 minutes to go. 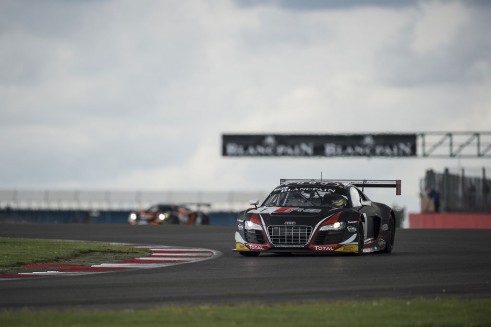 But that was to reckon without the astonishing pace of Laurens Vanthoor, recovering the WRT #1 Audi after a slow opening two stints from team mates Marc Basseng and Cesar Ramos left him languishing in 10th.

The Belgian racer stormed through the pack after the field was closed and snatched the last podium spot on the final lap. 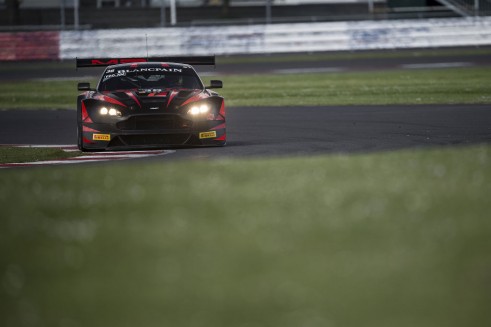 With the field boosted to 42 cars by a number of single entry British GT teams, preparing for their showpiece race at the track next weekend, the race had been hectic from the off. 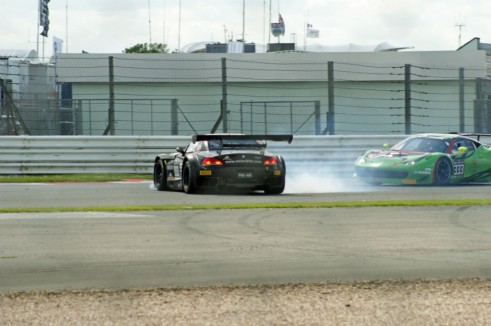 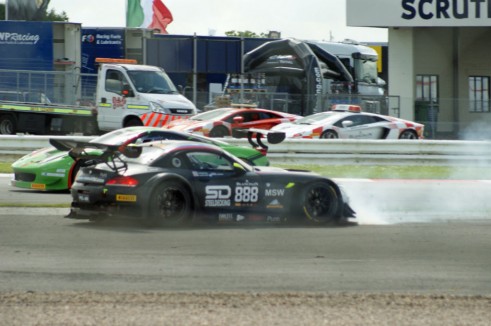 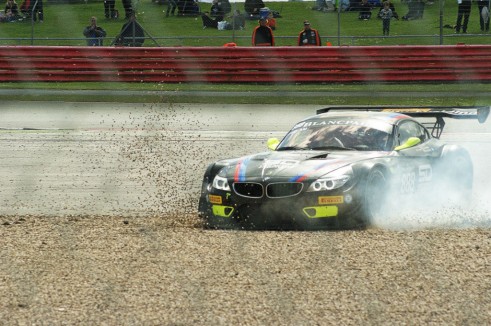 The Triple Eight entered #888 Z4, a regular in the British Championship, found itself a victim of the #333 Ferrari that caused controversy in the opening round at Monza.

Pitched into the gravel at Becketts by the bright green machine piloted by Rinat Solikhov inside the first quarter of an hour Ryan Ratcliffe recovered the Z4 only to be flung off the track at high speed on the run to copse by a rapidly deflating tyre. 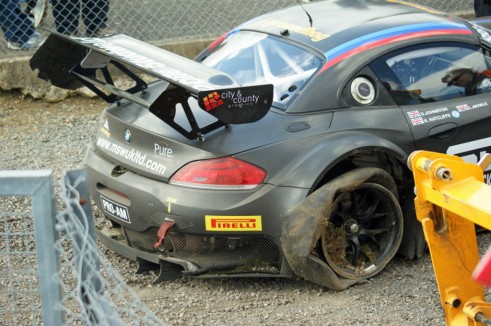 Ratcliffe walked away from the stricken car, which had been pitched into the air by the rapid blowout before impacting the inside wall, hard. 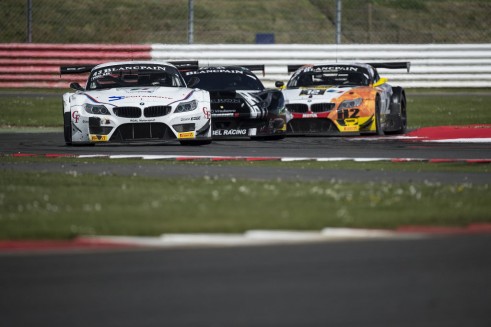 Despite an incident packed race, where the number of pit lane penalties passed into double figures, the safety car did not intervene until the last hour when Andy Schulz hit the wall backwards after running wide coming out of Chapel in the HPR Aston.

Their victory denied the MP team a victory that seemed nailed-on after a brilliant stint from Joe Osborne in the mid race pushed them to the head of the pack.

But their race was to be stifled by the intervention of the safety car and team mate Mark Poole was unable to match GT Academy graduate Strauss’s pace in the closing minutes. 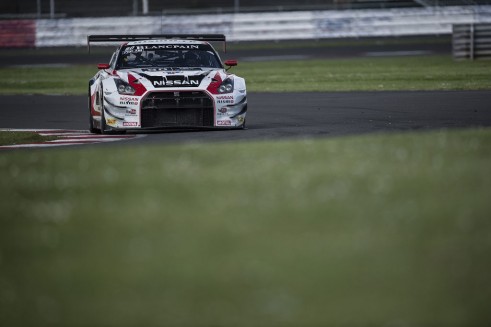 The Gentleman’s Trophy victory was claimed by Alexander Mattschull and Frank Schmickler in the GT Corse by Rinaldi #458, their second class victory in a row ahead of Peter Mann, Filipe Barreiros and Francisco Guedes in the #51 AF Corse Ferrari and the second Rinaldi 458.

The result means ART retain their lead in the Endurance championship, eight points clear of M-Sport Bentley, while Korjus, Estre and Soucek now hold a slender one point advantage over team mates Parente, Demoustier and Premat.

ROAL lead the Pro-AM cup over  Nissan Academy Team RJN by five points, while the GT Course by Rinaldi pair of Schmickler and Mattschull comfortably lead the Gentleman’s Trophy standings.

In the overall championship a quiet weekend for HTP and the absence of Grasser means the WRT Audi team jumps into second, five points behind the Mercedes team.

In the driver’s standing championship leader Max Buhk missed the British round, allowing Sainteloc drivers Ortelli and Guilevert to close to 10 points behind and equal with Buhk’s team mate Max Gotze, who also missed Silverstone. 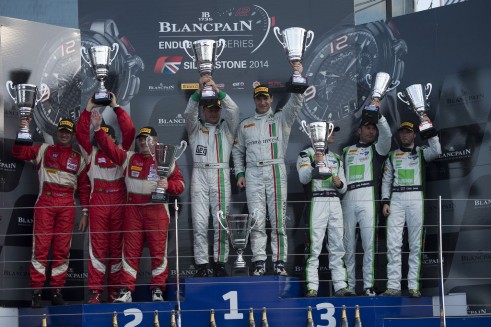 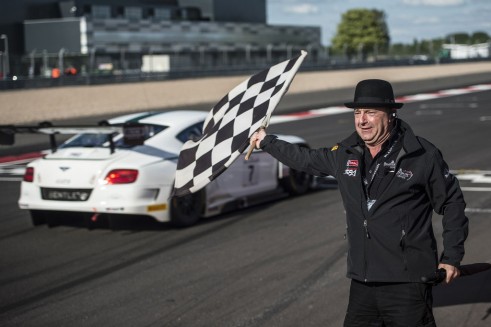 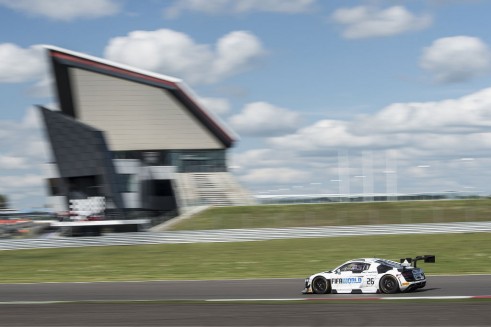 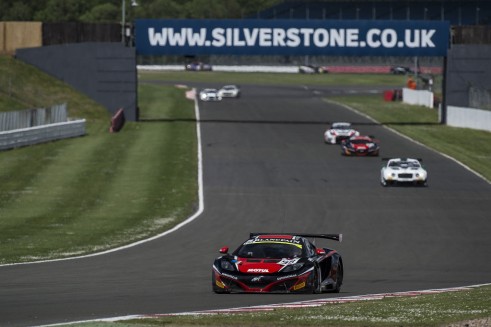 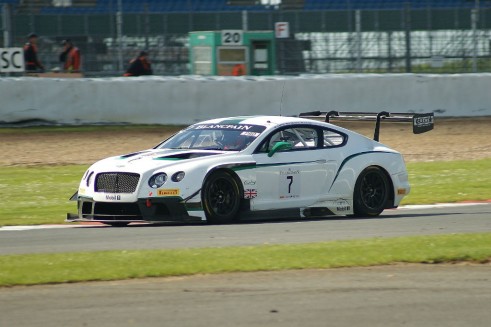 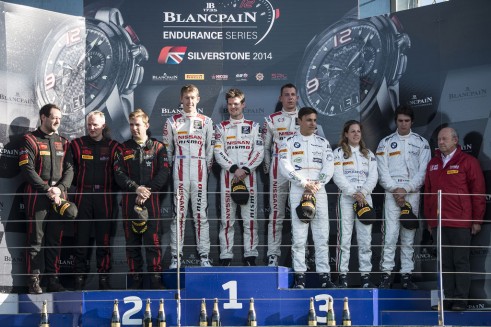