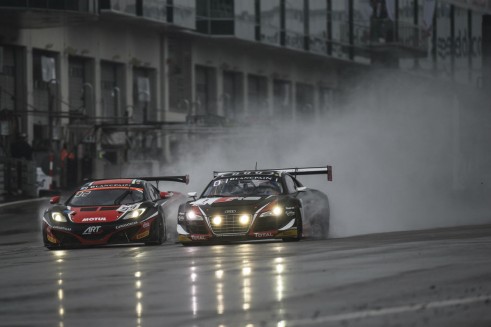 Laurens Vanthoor clinched the Blancpain Endurance Series title after racing to victory in a soaked Nurburgring 1000.

The Belgian racer had started the six hour race on pole after teammate Christopher Mies set a blistering time in qualifying.

But the WRT #1 car didn’t have it all it’s own way during the double-length season finisher as an absorbing finale swung between three different manufacturers as time ebbed away. 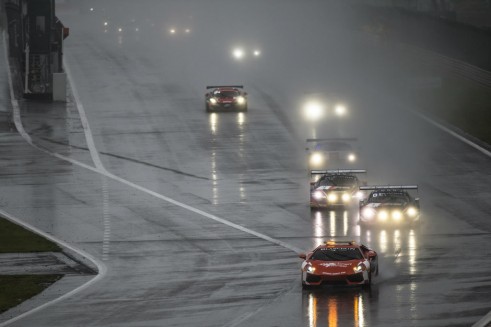 It started in sedate fashion, heavy rain forcing the cars to leave the grid behind the safety car, and the race didn’t truly get under way for another 20 minutes.

Almost immediately the #8 Bentley was around, an innocuous spin almost becoming a race ender when Michael Caine was unable to avoid the the stranded Continental GT, fortunately the Brit managed to get the #44 Aston far enough to the side that it just clipped the rear.

While Mies scampered off in front it was all action behind, Kevin Estre soon punched the #99 ART McLaren into second place ahead of the squabbling HRT Mercs. 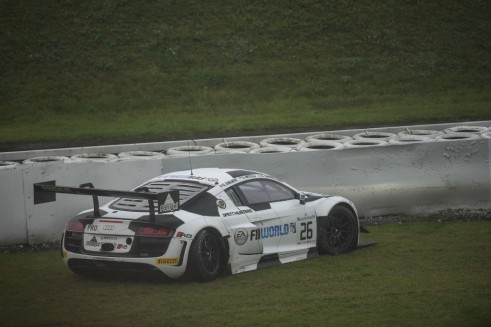 Barely 10 minutes into the race proper we lost our first title contender, as Edward Sandström hit the wall in the #26 Sainteloc Audi, damaging the rear suspension and all but ending his, Stephane Ortelli and Grégory Guilvert’s chances of taking the title.

At this point it was looking good for Vanthoor, not only was the #26 out but the Bentley #7, whose trio of drivers could all win the championship, was struggling in the wet.

Just after the half hour mark though Estre made his attack. The Frenchman working his way up to the back of Mies before forcing his way through at turn one. 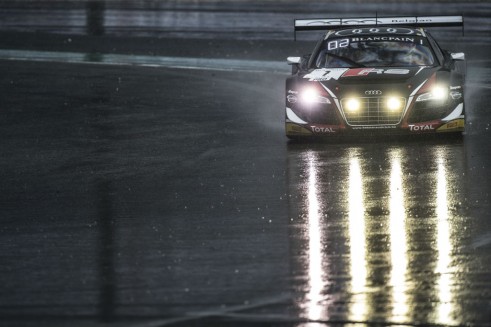 Despite knowing he held his teammate’s championship fate in his hands Mies refused to be beaten, pushing the McLaren wide onto the wet grass in an attempt to keep the lead.

But his efforts came to nought as Estre held firm and made his way past on the run to turn 2.

At the first hour Mies pulled into the pits and handed the Audi over to Cesar Ramos, the Brazilian emerging in the lead after a slow pit stop by the ART crew left the #99 31 seconds down. 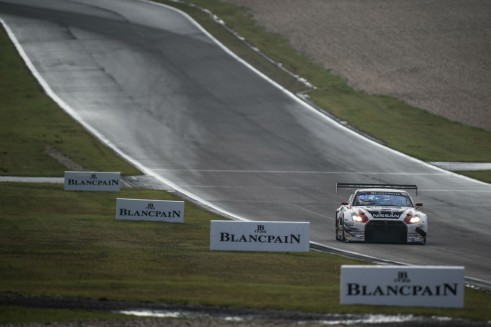 Meanwhile the Pro Am #80 was rapidly emerging as the star of the race.

The RJN-run squad’s British pro peddler Alex Buncombe had made his way up from a lowly 13th on the grid into the top five by the time the stops sorted themselves out.

As the conditions continued to get worse Buncombe set off after the leaders, dispatching overall series leader Buhk before hunting down Ramos and taking the lead with ease. 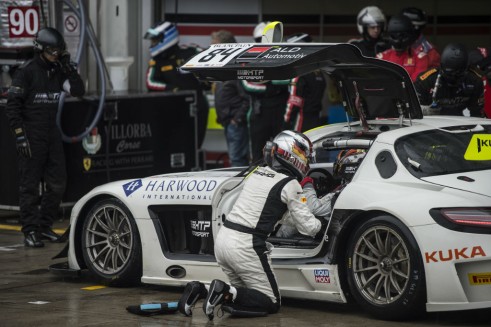 The Brazillian driver, unable to match the pace of his team mates in the treacherous rain and mist, slipped back into the clutches of the HTP pair of Buhk and Nico Verdonck.

He was easily swallowed up by the #85 before slithering wide at the first corner and having to settle for fifth place.

At the 90 minute mark cars were still heading for the scenery at an alarming rate, Rahel Frey pitched the #1000 into the tyres at turn one while the Gentleman’s Trophy contending #458 Ferrari paid multiple trips to the gravel. 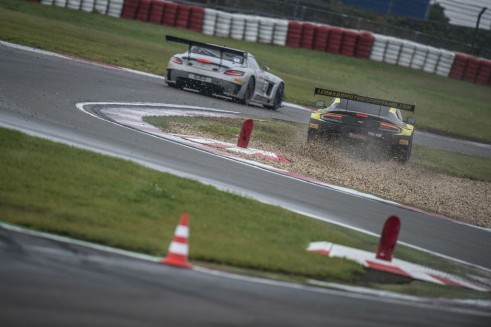 But none of this fazed the brilliant Buncombe, when he eventually handed the car over he had built up a near 20-second lead, appearing completely at ease in the rain and reveling in the Nissan’s apparent superiority in the wet.

But the #80 would tumble away to finish nine laps down as GT Academy graduates Florian Strauss and Nick McMillen struggled in their first taste of wet Blancpain racing.

That left the two Mercedes clear in front, Stef Dusseldorp leading in the #85 while German legend Bernd Schneider was strapped into the #84. 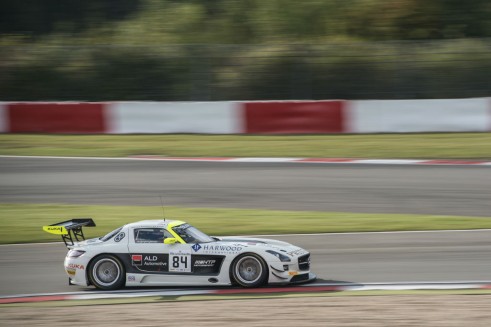 Ten minutes was all it took for Schneider to move to the head of the field.

Running close behind the sister car he sprung past when Dusseldorp as the Dutchman was balked while trying to lap the struggling #7 in the hands of Andy Meyrick.

Half an hour later the rain reached its peak, and the safety car was again brought into action as they cleared the cars that littered the side of the track.

Unfortunately the Lamborghini Aventador missed the leader, instead picking up the #85 and nearly allowing the #84 to gain a lap before race control finally decided to let everyone past. 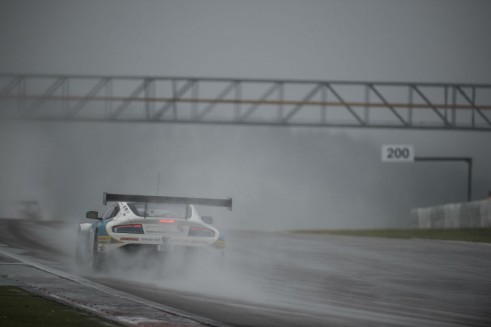 The track returned to green after just over four hours and in the next quarter of an hour Mies, now back in the #1, dispatched the #84 now in the hands of Harold Primat before closing down Sergei Afanasiev for the lead.

Mies retook the lead with two-and-a-half hours to go, angrily flashing his lights at the #19, which had taken the lead after the pit stops, before making the move into turn two just as Primat spun into the gravel, taking the #84 out of contention.

That allowed the recovering #99, now with former Formula 2 champion Andy Soucek at the wheel, back into the top four. 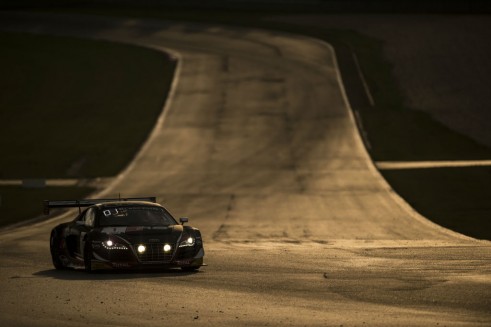 Working well the McLaren wasted no time working its way up to the back of Afanasiev’s Mercedes, before Soucek forced his way passed, pushing the #85 wide with an automotive shoulder barge at the hairpin.

Afanasiev’s troubles weren’t over, as he lost out again shortly after to the impressive Nick Catsburg, who was hustling the Marc VDS Pro Am Z4 with some aplomb.

Finally, with two hours to go, the rain began to ease, and the ART squad were the first to gamble on slicks. 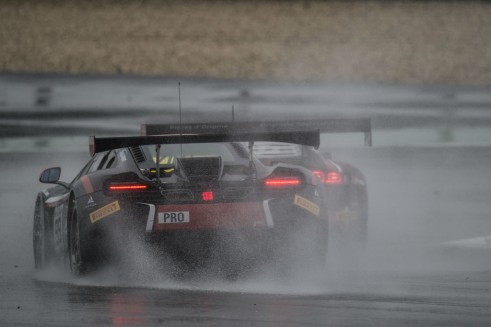 While everyone else watched intently Soucek hammered the #99 out of the pits, nearly dropping it as soon as he hit the tarmac.

His luck would only last three corners. The MP4-12C ran wide exiting the tight hairpin, and, despite his efforts Soucek was sent pirouetting gently into the barrier.

Much consternation was caused back in the ART pits by the Spaniard’s attempts to get the car back on track. 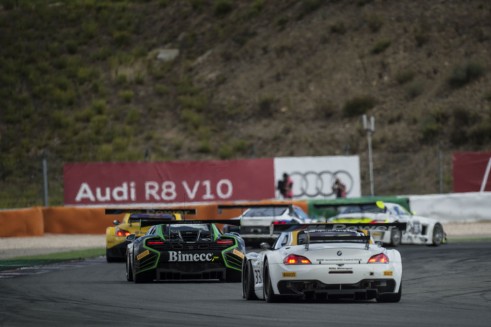 Flames spat from the McLaren’s exhausts as Soucek revved the McLaren as hard as he could in reverse in an attempt to find the tarmac. But the rain sodden soil provided no traction.

By the time two marshalls arrived on the scene to give him a hand the McLaren’s two exhausts were glowing, as the frustrated Soucek refused to stop his attempt to rejoin the race.

None of this troubled the #1, Vanthoor, now in the car for his two hour final stint, built a hefty lead over Abdulaziz Al Faisal, who had taken over the #19 Black Falcon Merc in second. 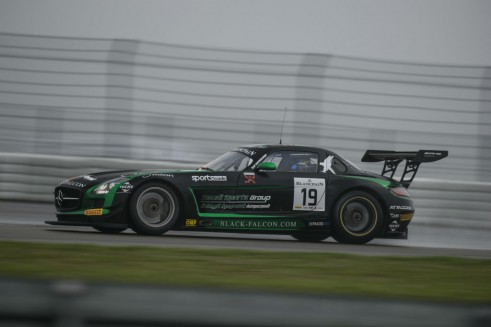 The Saudi racer had held his own impressively despite the attention of Afanasiev, but couldn’t hold off the professional racer when he was eventually closed down, relinquishing second to the charging #85.

Meanwhile as the circuit dried the #888 BMW of Alexander Sims caught the eye, setting fastest sector times as it snuck into the top 10.

As the track finally developed a proper dry line Vanthoor was imperious at the front and the race finally found a rhythm. 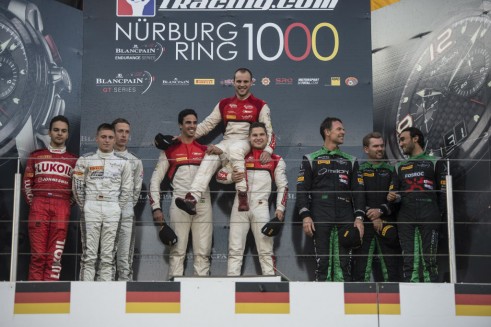 The Belgian would finally take the chequered flag by over 50 seconds from Afanasiev with the Black Falcon SLS of Hubert Haupt, Al Faisal and Andreas Simonsen crossing the line 20 seconds later as the last car on the lead lap.

Behind them Catsburg’s brilliant work in the #12 brought them victory in Pro Am and fourth overall, a lap ahead of Devon Modell, Anders Fjordbach and Vladimir Lunkin’s #18 Black Falcon Mercedes in second and Thomas Kemenater, Stefano Gai and Andrea Rizzoli in the #90 Ferrari 458 in third.

The result handed Rizzoli and Gai the Pro Am Cup after the challenge of Francesco Castellacci stuttered to an end in a spin strewn race. Ecurie Ecosse’s Z4 piloted by Andrew Smith, Alasdair McCaig and Oliver Bryant clinched third, the team particularly unimpressed with a penalty handed to them for improving under yellow flags. 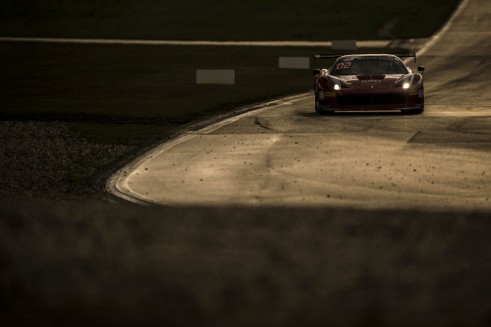 In Gentleman’s Trophy the Team Parker Racing Ferrari of Ian Loggie and Julian Westwood took their first victory of the season in 17th. a lap clear of long time championship leaders GT Corse by Rinaldi #458 of Alexander Mattschull, Pierre Ehret, and Frank Schmickler.

The championship however went to Peter Mann and Francisco Guedes in the #51 AF Corse Ferrari, who finished seventh.

They had lept to the top of the standings with victory in the Spa 24 hours. The crew of the #458 had won every round of the series until Spa, but Tim Muller crashed the car before they could claim any points and they had to settle for second.

Vanthoor and Buhk will now move the fight for the overall championship on to the Sprint Series’s penultimate round at Zolder on October 19. 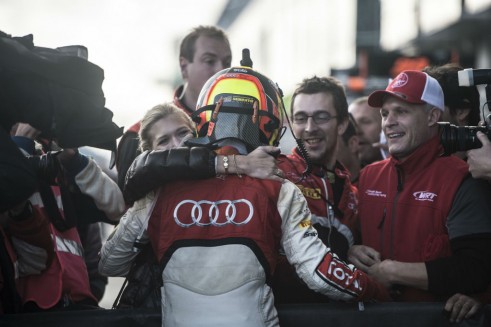 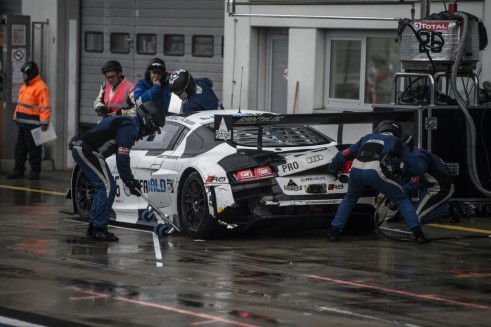 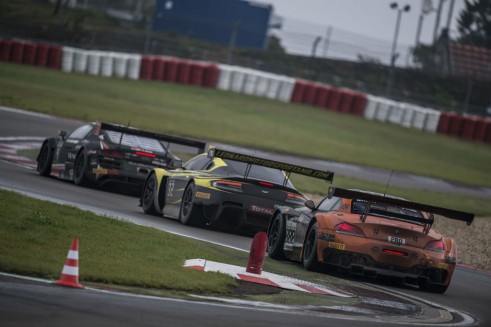 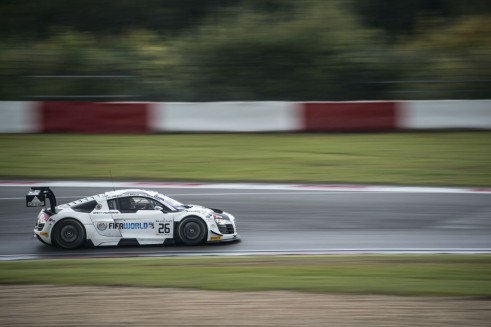 Infiniti Q80 to debut in Paris