Apologies, but I couldn’t resist. The reality is that the upcoming Audi RS3 which is probably still a good 12 months off, won’t share as much with this sinewy A3 Clubsport Quattro Concept as we might hope.

The motive of the A3 Clubsport Quattro Concept is both unclear and blindingly obvious. It undoubtedly serves to tempt our pallets as we await the RS3 main course but at the same time VAG has, in the past made short work of picking clean its most desirable concept cars of all things that made them so before the model makes production. 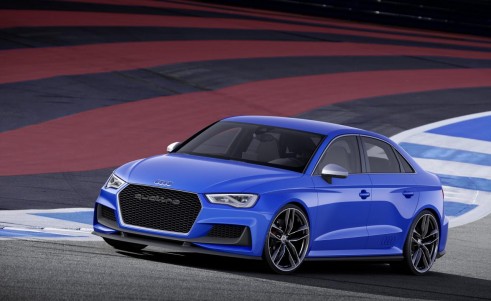 Regardless, lets take what we have for the moment- that is that thing that Audi does so well. A seemingly standard road going runaround which has received a good hard Shwarzeneggering body wise, 21 inch wheels and a bedazzling paint scheme. Magnetic blue, in this case. Don’t expect that gorgeous gratuitous exhaust emblazoned bubble butt to make production, either.

Unlike some concepts this one is a runner, although Worthersee is no stranger to the best running work of Volkswagens lunatic division.

Under the bonnet resides a familiar 2.5 Litre 5 pot turbo running a massive 517 BHP and 600 Nm of torque. All the walk to match the talk of that cage fighter body. Those healthy numbers are translated into motion through Audis seven speed S tronic to all four wheels making for a 0-62 time of 3.6 seconds before topping out at just over 190 mph. 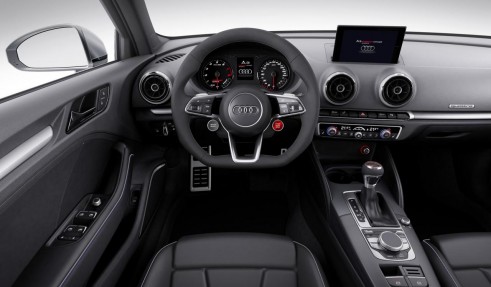 All, sadly, pie in the sky concept figures that will likely never see the glimmering light of showroom day, but its nice to see Quattro flexing its muscles.

So what can we derive from a concept about the road going RS3, for which this is irrefutably a prologue?

We’re not ones for rumour mill ambiguity but we can postulate the following things based on recent VAG movements. The assumed retired 2.5 litre engine may once again make an appearance. Aside from the obvious tease given its appearance in the A3 CSQ concept, VAG has recently endeavoured to keep alive those which many of us feared would meet their ends come the inception of the more stringent EU emissions regs’.

Case in point- the old 5.2 litre V10 that has made its way into the Lamborghini Huracan following CO2 conscious modifications such as cylinder shut off, and a fuel injection system that mixes both indirect and direct methods.

VAG has proven that downsizing is not necessarily the only route, but the easy one. So the 2.5 may have life in it yet.

Finally, although we are unlikely to see an RS badge on a small Audi saloon in the UK, the concept probably serves to gauge interest in such a variation in body styles for other markets. Worthersee is essentially VWs own little motorshow, in which it likes to pitch its lairiest ideas to its lairiest of die hard fans.

Shall we not, as i’m sure Audi won’t have, forget the incoming BMW M2 which promises to be the light on its feet ten tenths sports car that the slightly porkier M4 may not quite nail. In exclusively saloon/coupe body style, we might add. 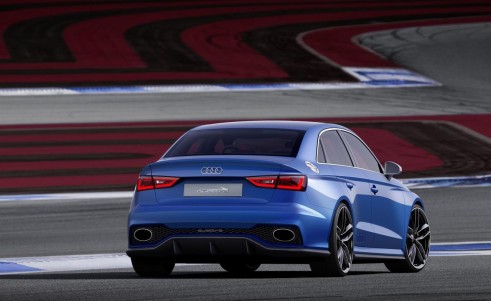 You can bet your bottom dollar that Audi is aware of the A game that BMW is bringing to its smaller pokier M products. VAG is therefore girding the Worthersee propaganda machine for now and hopefully Quattro is readying something pretty special to fight in VAG’s corner.

An epic battle is coming, but for now the A3 Quattro Clubsport is to make its debut at the aforementioned show on the 28th to the eager reception of the rabid VAGites.