Rarely in the world of crossovers does the word ‘Sporty’ come to mind. As much as all the marketing material will have you believe seldom can it be that such a car possesses any sort of sporting ability, until now.

Alfa’s Stelvio came out last year, and yes there’s a fire breathing Ferrari engined V6 version, but nobody in their right mind would drop £70k on that. For nearly 30k less though, you can bag yourself the Stelvio Speciale. Not only do you get to say you ‘drive a Speciale’ when anyone asks (let them think what they may and don’t correct them), but you also get 280 horses and a 0-62 time of 5.7 seconds. That’s rapid for a car of this ilk. 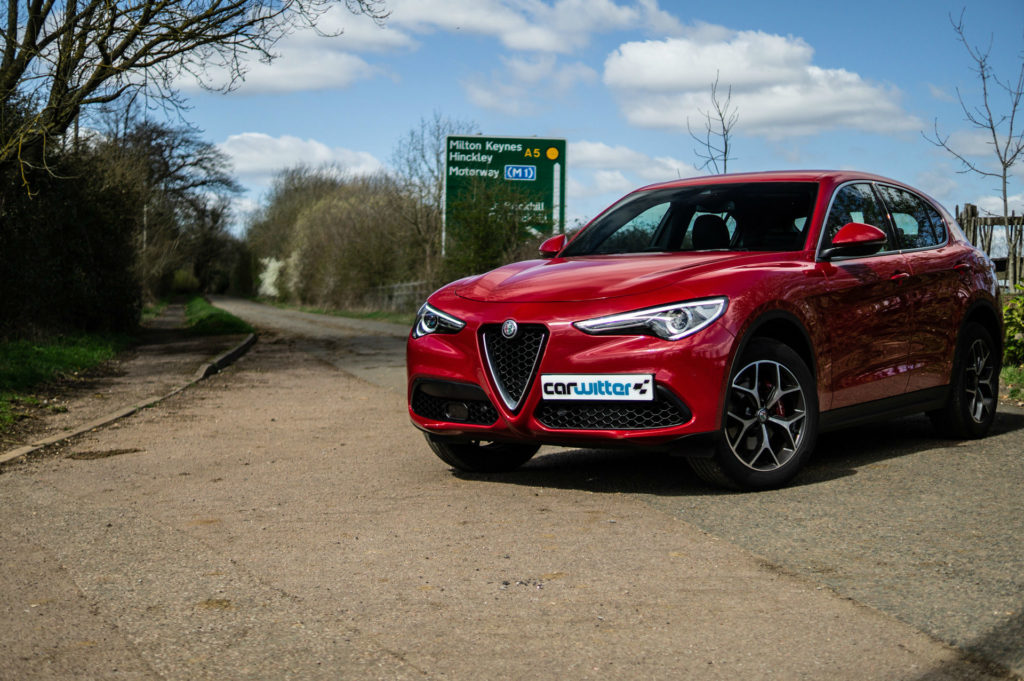 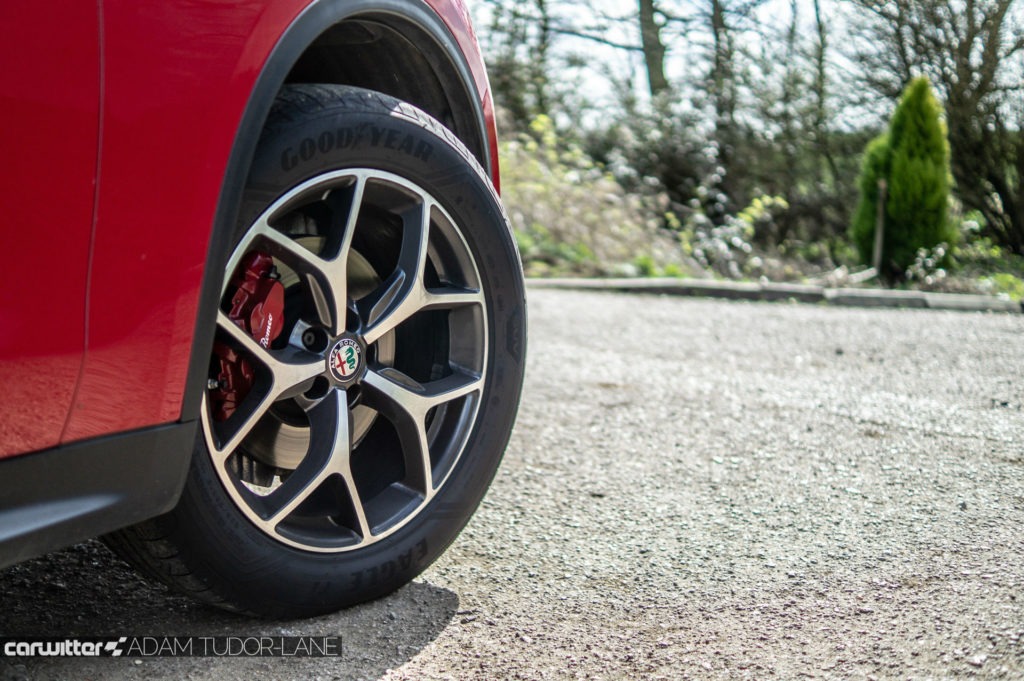 Most baby SUV’s or crossovers these days all seem much of a muchness, it’s become a bland roadscape of tall cars on our highways and byways. The Stelvio stands out though. Naturally, it has the V grille which denotes it as an Alfa, the bonnet is inset like in the Guilia giving the bumpers a wrap-around look to them.

Side on it looks rather poised, but everything gets a little lacklustre at the rear. Especially when you note the split in the tailgate, which is no doubt there in case you have a rear end shunt as only the lower half has to be replaced…it just looks a little disjointed.

Also, even though there are large 19” alloys at play, they still look teeny tiny and rather lost in the Stelvio’s arches. It does appear as though these have now been upgraded to 20”.

Overall it’s a good looker, and it got a fair few heads turning over our week with the Alfa. 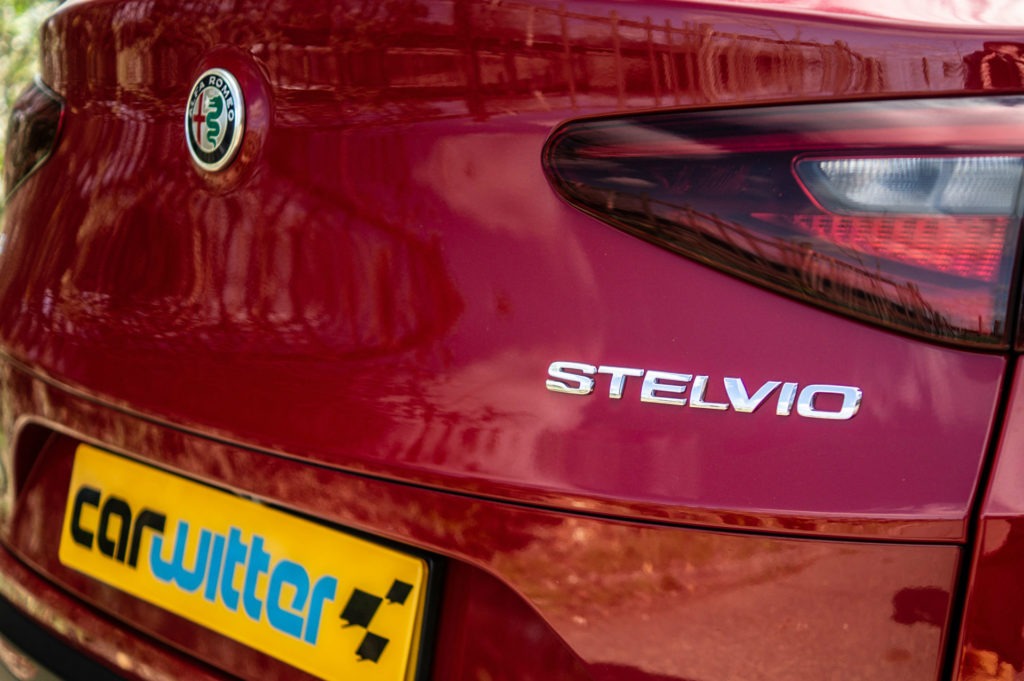 From the outset you notice the Stelvio is something different, it doesn’t feel big, or wobbly, or as though it’s teetering on stilts. There’s barely any body roll to be had, and you can thread this thing through traffic as you would a hot hatch thanks to all that power.

Plant your right foot at any pace, and the Speciale will launch itself at the horizon, even if the roads are slightly damp or wet the grip the Q4 all-wheel-drive system gives means the Stelvio remains planted.
There’s 400 Nm of torque at your disposal, which generates enough shove at lower speeds, but could feel a little lacking when you need more bite at the top end of the rev range. 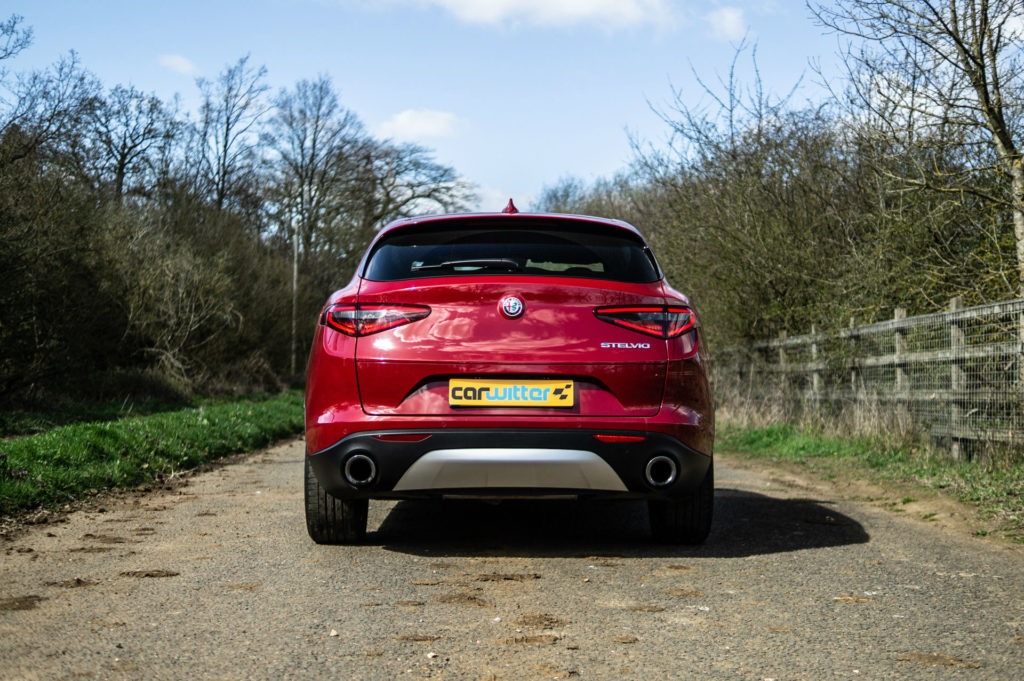 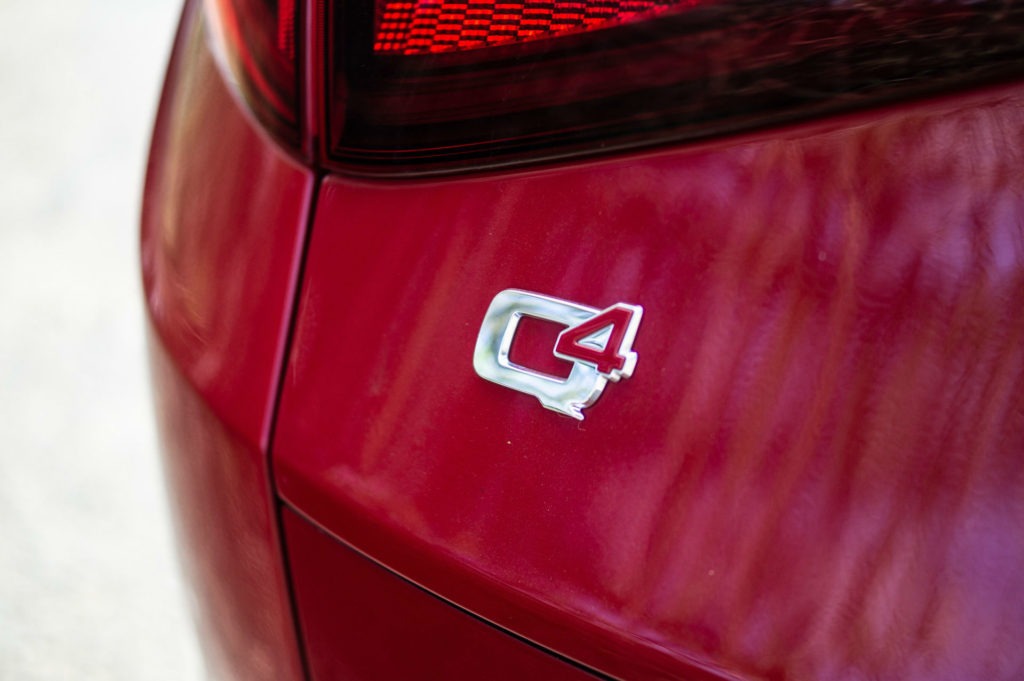 Turn in is pin sharp and the Stelvio remains flat, you can have a damn good hoon down some country roads and genuinely enjoy it. There aren’t any crossovers we can think of that perform so admirably as a driver’s car.

Ride is somewhat on the firmer side but never was it crashy or tiresome. It’s just not sumptuous and floaty, if you want that test drive a DS7 Crossback.

An 8-speed automatic gearbox is the only option, it copes with shifts well but isn’t bullet quick as you’d like when switched to manual and on the paddles. You have to catch the upchange a thousand or so revs before the red line, miss it and you’ll hit the limiter before a jerk and a change up. Leave it in auto though, and it’s silky smooth all day long, even at low speeds.

Urban MPG is rated at 31.7, however over 200 miles of semi spirited driving, most of it around town we could only muster 20 MPG. Realistically expect around 28. 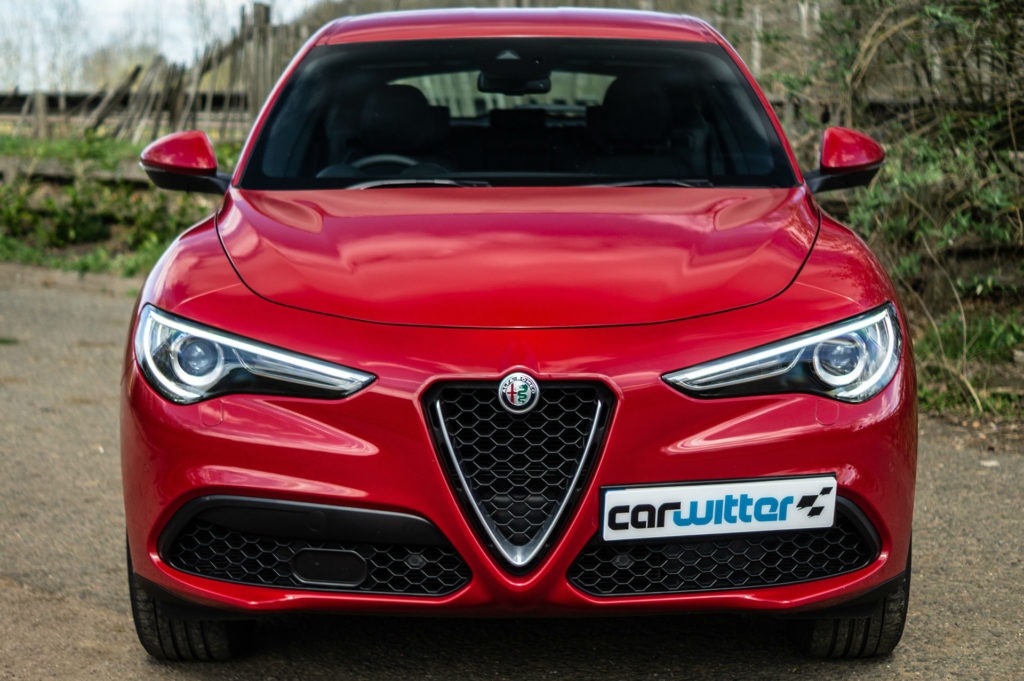 Inside the Stelvio you find a low slung, cocooning driving position. You aren’t perched, you’re part of the machine, much like you find in the Alfa Romeo Giulia. Instantly it feels like it fits and wants to be driven.

Sadly there’s still the awful ‘Elephant arse’ pattern imprinted across the dash. It’s truly dire and feels like a throwback to the ’90s. We said the same in the Guilia, it just lets the car down. With some wiser budgeting, a leather-topped dash or even just a different patterning would make a world of difference. 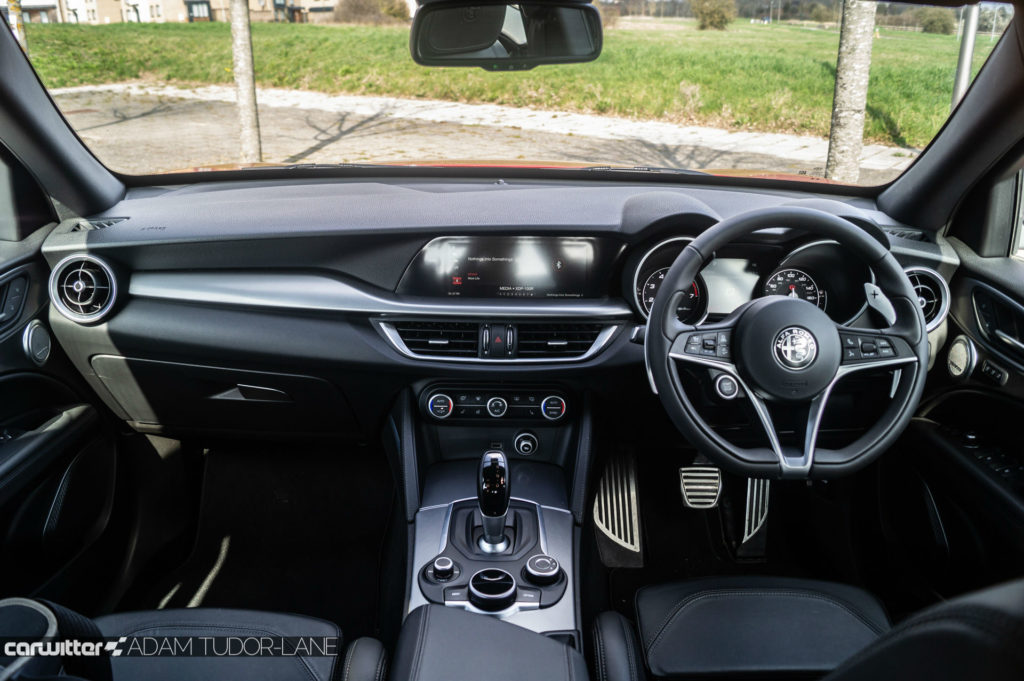 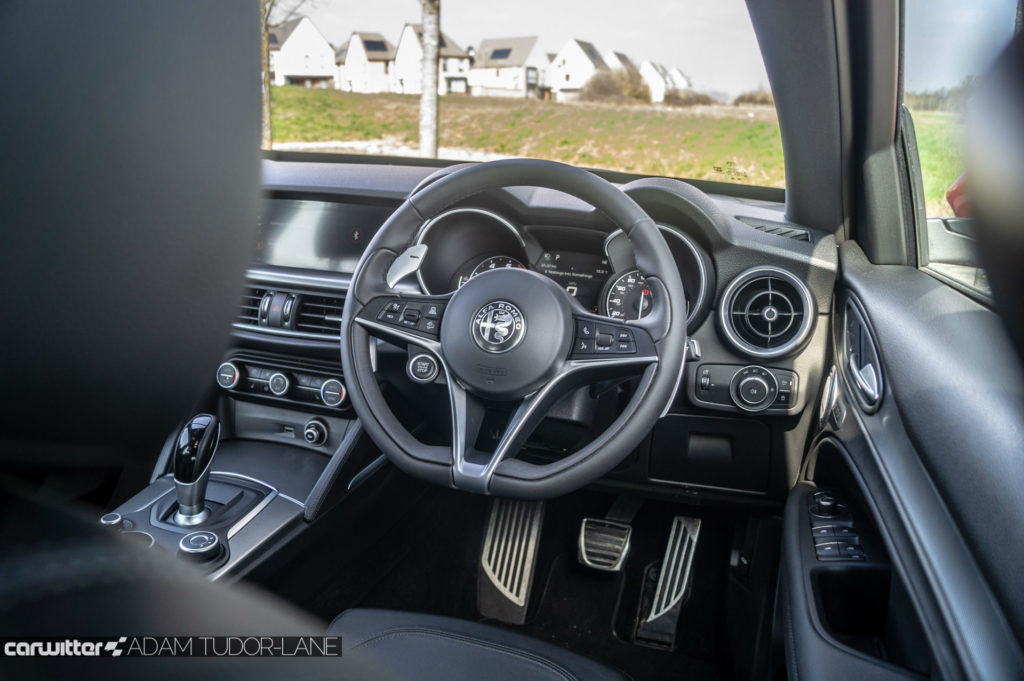 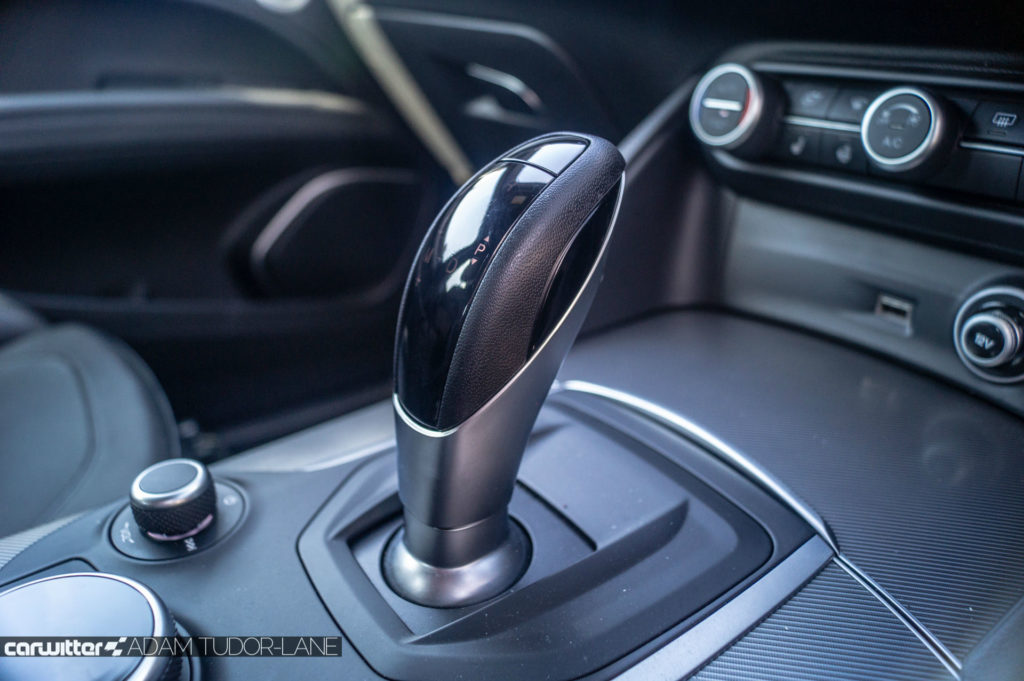 The gear lever has a few sharp edges on its sides, and the DNA switch doesn’t provide smooth operation, it was a slightly sticky, gradual click to each setting. Also, some of the black finish was scratching off from one of the cruise control buttons…not great on a car that has less than 10k on the clock. 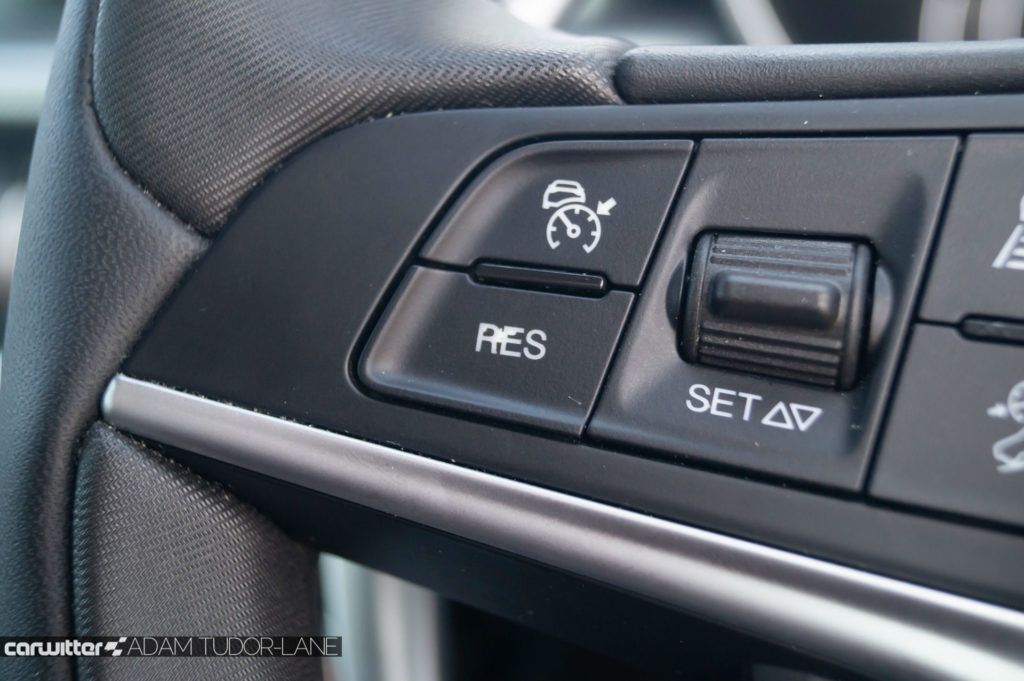 On the plus side, the flat bottom wheel sits nicely in hand, the paddle shifters are large, cold and metal as they should be. The rest of the switchgear feels nice in hand, the aluminium pedals look gorgeous as does the metallic weave finish across the centre console and dash.

Like the Guilia having the start button on the wheel makes so much sense and adds to the theatrics.

Options included the £950 Harman Kardon stereo, which was damn good. Excellent amounts of bass from the rear mounted sub and clarity was kept right up to the highest levels.

Rear seat legroom is healthy along with headroom meaning two adults can sit in comfort. There’s also 525 litres of boot space to be had, matched with a flat boot floor to make chucking everything in that bit easier. 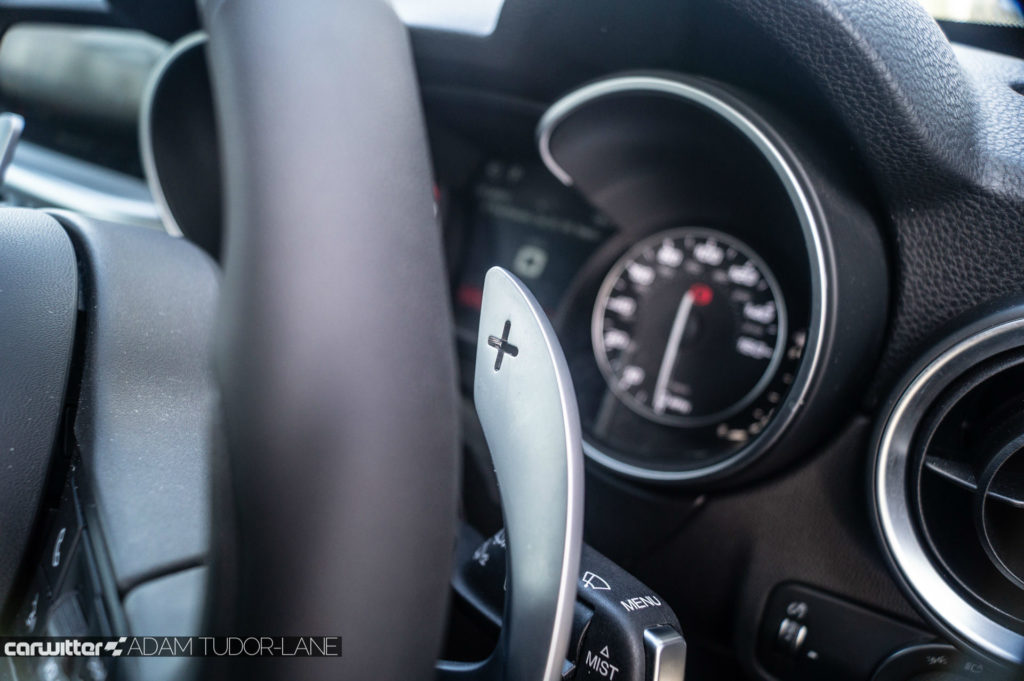 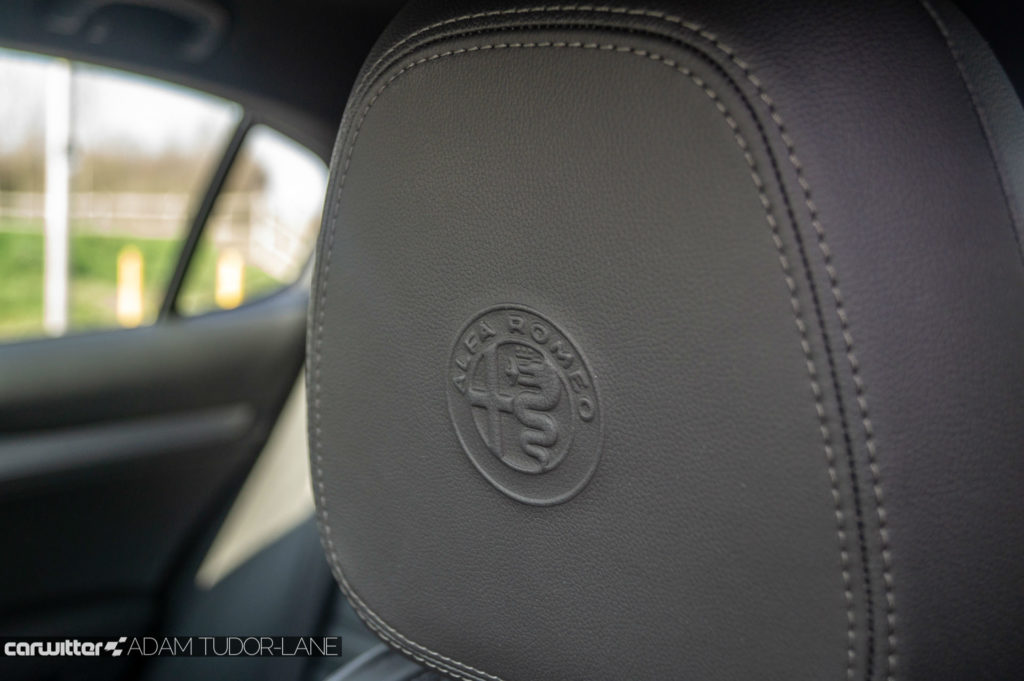 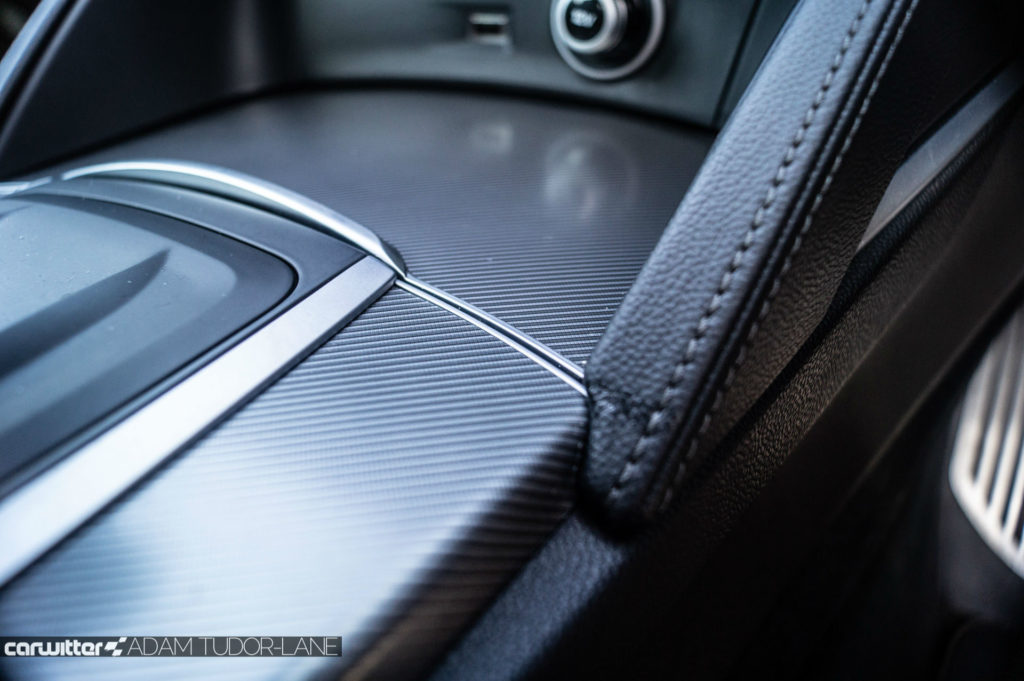 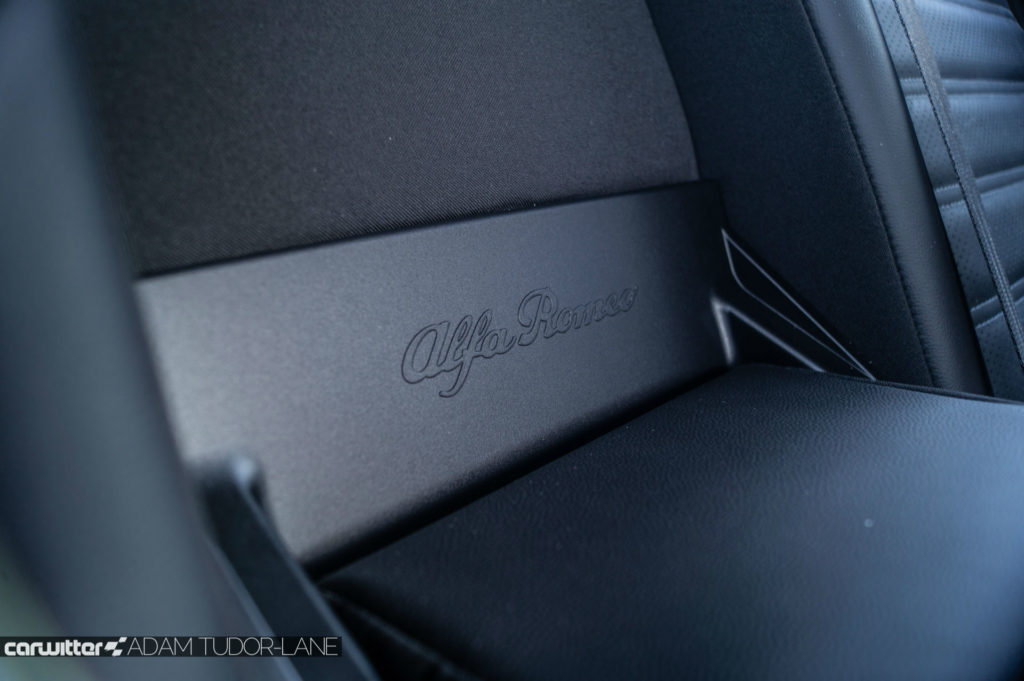 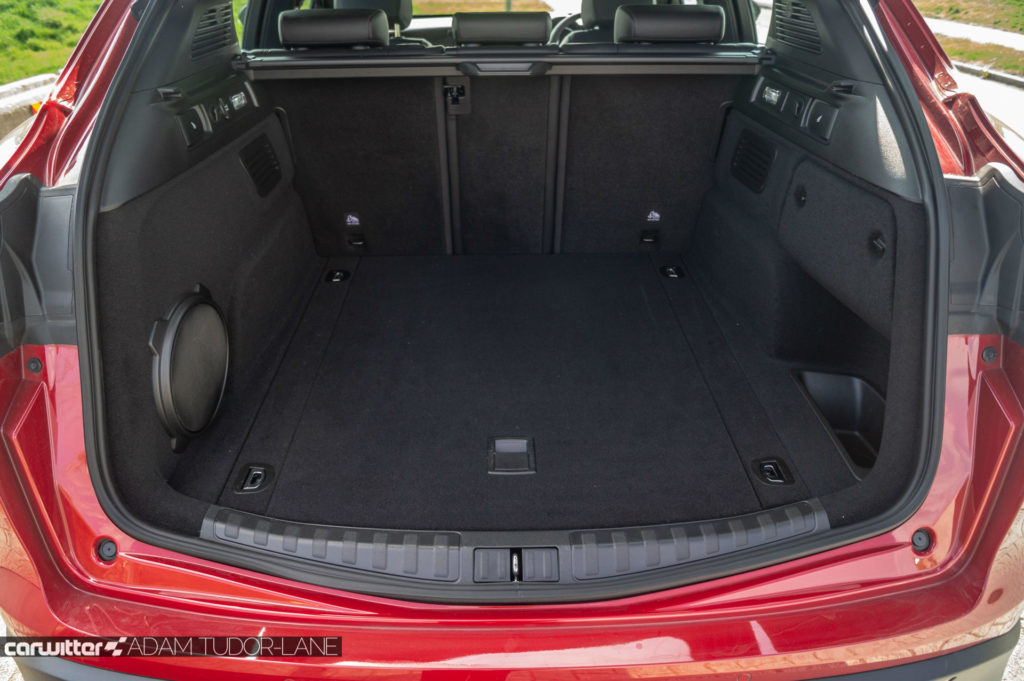 Alfa’s petrol Stelvio Speciale is the model to get if you’re an enthusiast who loves to drive. Forget all the other crossovers out there, nothing comes close in terms of handling and performance.

But it’s not without its drawbacks, starting at £45,590 it isn’t cheap, consider the interior quality by comparing it against the latest Range Rover Evoque for instance, and you see that it’s not in the same league at all.

Would we still buy one? Yes. 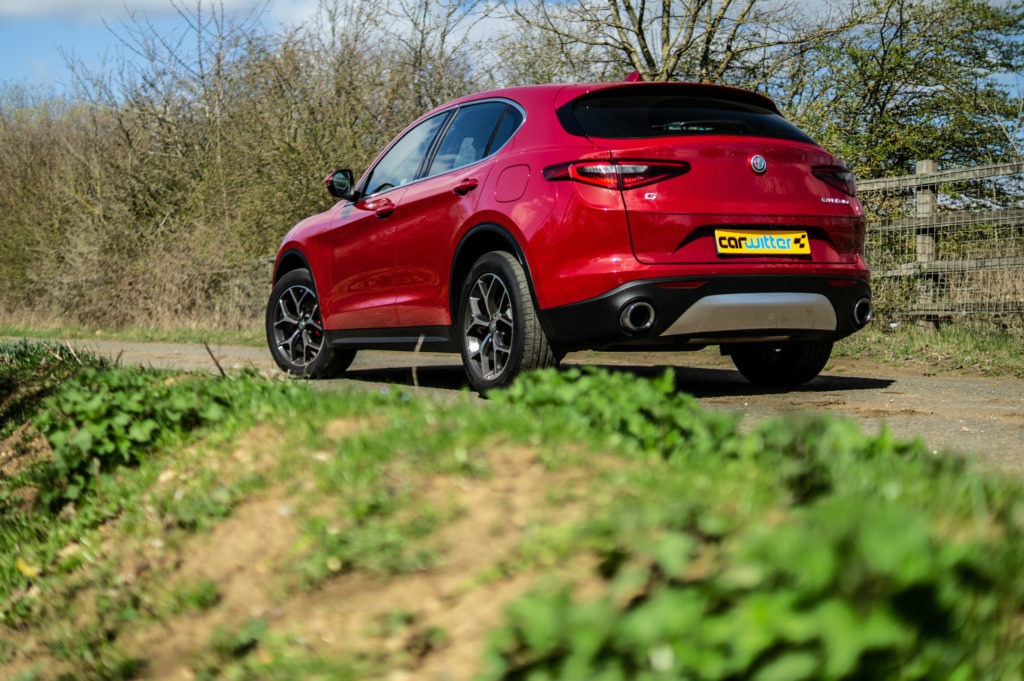 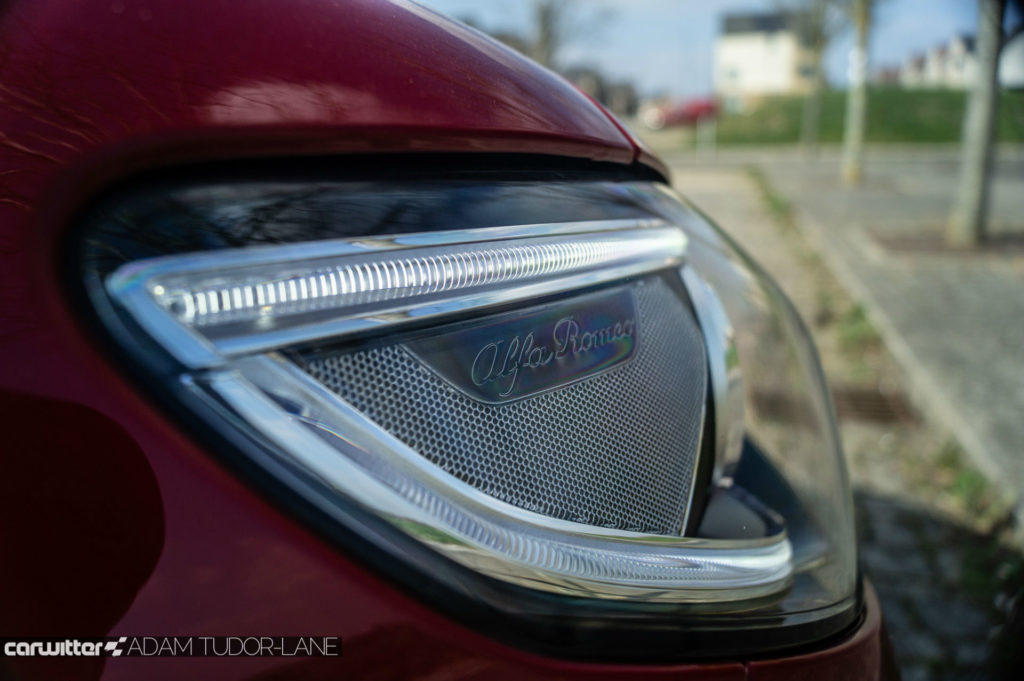 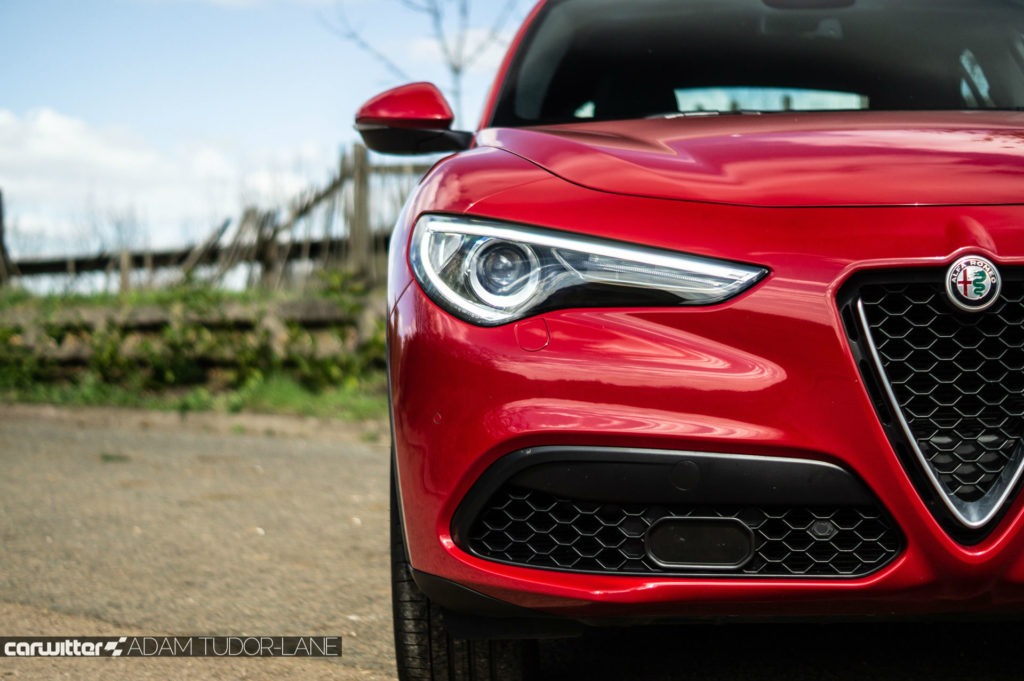 Customizing your Car for Professional Use – Tips and Advice on Graphics