A look around the new Bentley Continental GT V8S

What’s your marketing strategy going to be?

Luckily, if you are Bentley, it may be within your capacity to draft in a couple of gems from your pocketed but enormously successful motor racing history to illuminate the bloodline for prospective buyers to admire. 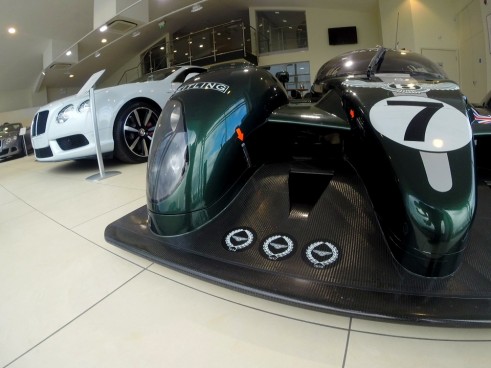 Thats exactly what Vindis Bentley in Cambridge has done, and its fair to say it got me sniffing at their gates.

Stroll around the front you get a glimpse of a very low, very green, very wide LMP car with BENTLEY, BREITLING, ‘7’, and “24 Heuers Du Mans-2003” splattered across it. 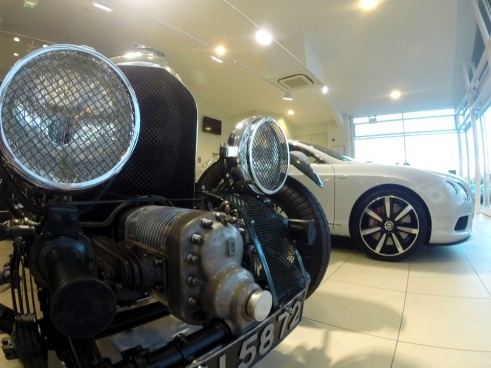 Next to that, the car of the moment for Bentley, the GT V8S, one of a few forays in recent years into a section of the market with a far faster pulse rate than what might be considered typical of the winged B.

And to the left, arguably, the car that started it all and another Le Mans racer, the Bentley Blower. A car that, together with the Speed 8 all the way to the right and with a sumptuous Mulsanne sitting in the background, perfectly rounds off the dichotomy of Bentley as a manufacturer. 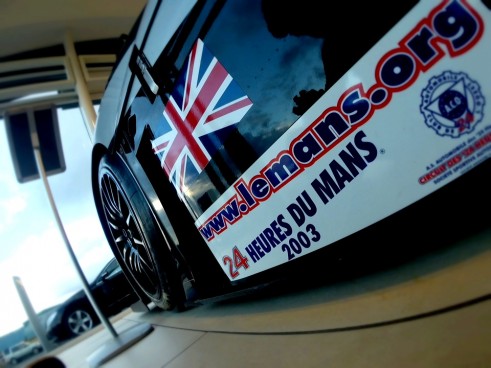 The room is thick with the presence of two of the most iconic racing cars of all time, spanning the company’s history almost in its entirety, and yet this same company is largely famous for building long comfortable sumptuous luxury expresses for her majesty the Queen.

If anything then, you can only really say that for Bentley, when they do something, they do it properly.

So what of the new boy then?

The Continental, a shape that we’ve been used to for some eleven years now, has been kept fresh faced and fast with ‘Speed’ variants and the insane ‘Supersports’ as well as catering for all buyers with four door and convertible versions.

Adam drove the bigger brother W12 late last year, but that is a different beast entirely. 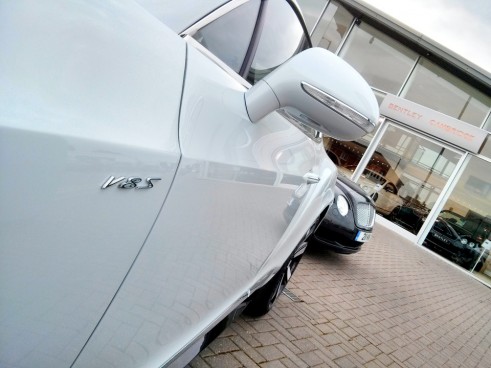 With this facelift generation they’ve seen fit to equip a small, light and throaty twin turbo V8 alongside the familiar W12.

The V8, which itself received critical acclaim for being one of the nicest Bentleys to drive in years, has now fathered an sportier model, one of the first of many seen here.

The internet can harbor a lot of harshness and hate for cars that are garnished with endless badges trims and variations but such increments for the Continental have largely given exceptional results.  The V8S may well be another.

Power, something we were never short of, has been upped to 521 BHP and 680 Nm of torque translated into movement via the immensely capable 8 speed ZF gearbox.

This enables this speed boat/yacht cross breed to consume the 62mph mark in 4.3 seconds and to hit a top speed of 192. 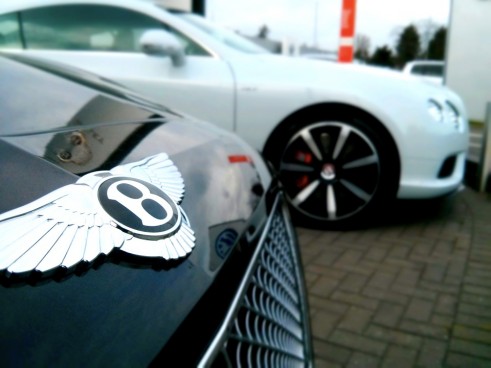 The S gets a 40/60 torque split along with a more purposefully tuned damping setup which should make for a riot on the road given the capabilities of its already compelling forebears.

On the outside, subtle smart air splitters adorn the front along with the familiar sporty red B badging.

The car seen here wears the attractive ‘Ice white’ hue offsetting wonderfully the V8 wheels we’ve come to know seen here in black. At the rear little has changed from the V8 with a slightly porkier diffuser making an appearance.

Subtlety i’d say is a valuable attribute Bentley pulls off well, successfully avoiding smothering faster models like this (ignoring for a moment those footballer spec SuperSports from a couple of years ago). ‘V8S’ badging on the sides and those understated winglets should be enough to let the eagle eyed know this is something more than an ‘average’ Continental. 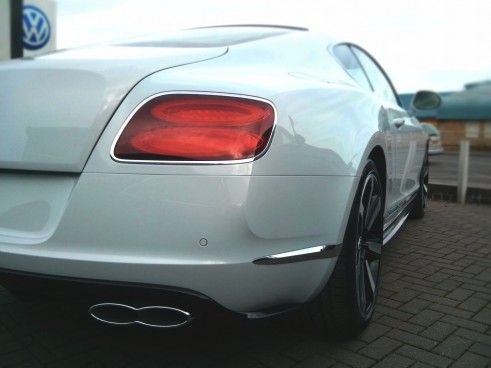 The interior is nothing less than quintessential Bentley. Beautiful quilted leather complete with obligatory sporty contrast stitching, expensive air apertures, solid trim in whatever element you care to spec it in, lovely gaze averting dials and a host of tried and proven VAG gadgets. A familiar environment but difficult to argue with in terms of the cockpit experience.

What remains a point of contention for me is the price.

This is as ever something one has to get his or her head around in this segment of the market.

Inflation has played its part and the product is of a quality comparable to other.. wait for it, £170,000 (as specced here) cars. 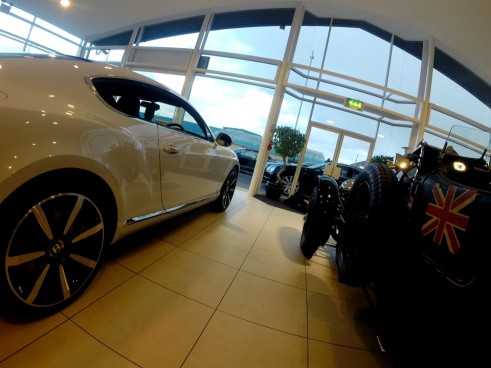 Its also worth noting that this has a smattering of options many would not look at, but perhaps omits some too (alcantara interior trim for me)?

All in all, it is on the face of it a quality product that commands a questionable but not unimaginable premium. If you’re looking for a 12C/458 competitor performance wise, look els-ware. It’s important to remember that though costing more or less the same, the V8S sports a different but no less compelling skill set.

Before I conclude, a final few thoughts.

If, as mentioned before, Bentley goes the whole hog on whatever project it cares to undertake, will this ‘sporty’ two ton luxury coupe be a Jack of all trades, but a master of none?

Moreover, will it be a front to both the magnificent Mulsanne and the Arnages of old as well as the legendary racers that flank it on this showroom floor?

Or will it be a satisfying amalgamation of the two?

Thankfully,  judging by their recent efforts, we can expect the latter with relative confidence.

If the old Supersports is remembered for anything it is either, that it could run on bio-ethanol: a technical exercise, or, that it is reported to be able to hide its weight in the twisties to a degree that was scarcely believable: a technical miracle. 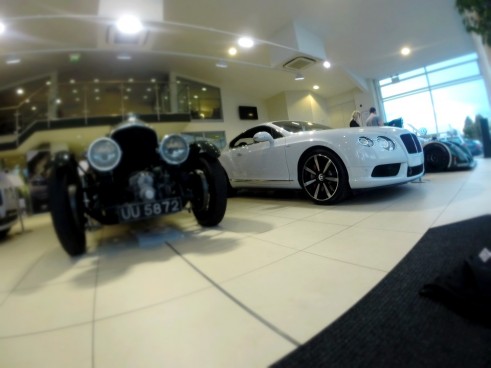 With the standard V8 receiving praise for its surprisingly supple and enjoyable driving characteristics, surely this sportier ‘S’ model is already on the right track.

Some cars have too many versions and specifications whereas the Continental in its history seems to have seriously benefitted with each one and in recent years really come into its own. The only question is that of price.

Thats one that I struggle to answer for myself, but that many both won’t have the need to consider and will have the capacity to ignore and I say all power to them. The GT V8S is shaping up to be the best Continental yet.

A car that has grown into itself commendably.

Expect some separate words containing a whole host of pictures and a natter on about the Conti’s rather breathtaking ancestors shortly. 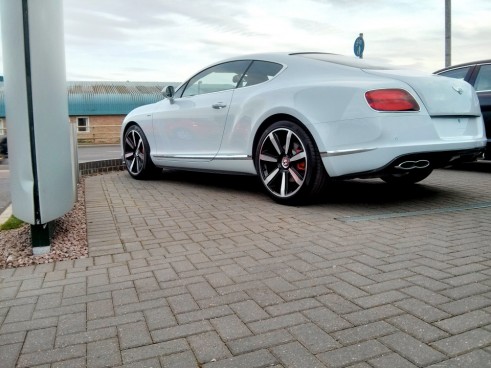