The last time we had our mitts on the Suzuki Swift SZ-L was way back in 2013, three years on we went to back to see what the latest iteration had to offer.

Starting at £11,149 it has jumped in price since our last outing. Still fitted with the rev happy 1.2 litre lump making 93 BHP, and hitting 62 from a standstill in 12.3 seconds.

The last special edition SZ-L model featured a few mild tweaks in appearance, but Suzuki have gone far further this time hoping to attract younger buyers to the range.

Now you get gloss black 16” alloys, a rear upper spoiler, rear tinted glass and SZ-L badging. It’s a smart looker with enough street cred to tempt youngsters away from the Corsa Limited Edition (which is nearly 4 grand more).

The Swift can manage such power due to its 16 valve VVT setup the, same technique used on the 1.6 litre found in the Sport. Weighing only 1,005 kg the Swift isn’t far off the magical 100BHP per ton formula.

Putting your foot down in first gear is a little sluggish until the revs climb, but after that it’s rather nippy. Second and third are the best gears, offering plenty of pull when you need it.

We found there was ample oomph to overtake slower traffic when the need arose, only when you get to motorway speeds does the car feel as though it’s running out of puff.

But with 5 gears its best suited to around town, rather than a motorway goer.

Take this little Swift along some B roads, let the revs sit high, while working the gears and you can have some great fun! Don’t get us wrong this isn’t a quick car, but it is rapid if you drive it right.

The handling is nearly on par with its bigger brother the Sport. A firmish ride keeps everything solid in the corners, and the chunky tyres soak up imperfections in the road really well, but can become a little bouncey over undulations.

You can feel the little Swift move around on it’s sidewalls when really pushing into a corner, but it’s all good fun. 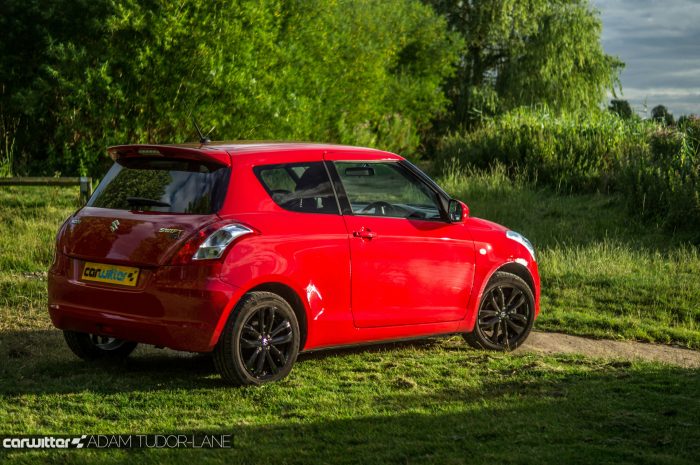 Steering is direct and instant, it feels as though you’re in a go kart it’s that good. Brakes are decent too, even with the rear drums it stops well.

Around town MPG was good, we returned 44 MPG over 200 miles of town driving. Claimed urban figures are 46.3 and we can easily believe that is achievable.

Hopping inside and the SZ-L and you get some funky barcode style cloth seats, a nicely stitched leather sports steering wheel, sat nav, DAB and Bluetooth hands-free.

The nav is a great addition over the old model, and something others fail to add at this price point.

Dash plastics are of decent quality, there is a lot of it up front and it could be seen as a little dated these days in its design. But it’s pleasing enough.

There is plenty of room in the back for an adult to sit comfortably, we had the seat three quarters of the way back and there were still a few inches of leg room.

It still has the small, deep boot, but it’s plenty of room enough for a few shopping bags.

With the added sporty looks, and extra kit the SZ-L would be a great first car! Insurance wise it’s in group 11E, whilst tax costs £30 a year due to its 116g/km emissions rating.

Swifts are known for being bulletproof too, so you could easily keep it ultra-long term and not have to worry.

It’s a superb car for around town, agile handling and a nippy little engine when needed. But as a bonus, it has the Sports great handling for when you want to just go out for a drive!

We have driven quite a few small hatches, with both 1.2 and 1.4 engines, the Swift is still head and shoulders above the competition for us.

In terms of price, kit, MPG and fun to drive, nothing can beat it.