Baleno is back! In another car name revival the Baleno sits marginally above the Swift…but in the same segment. Think of it as a Swift with a bigger boot if you will.

Spend a grand and you can step up to the SZ5 trim, that adds auto climate control, rear electric windows, a 4.2 inch colour display between the dials, LED rear lights, adaptive cruise control and radar brake support. 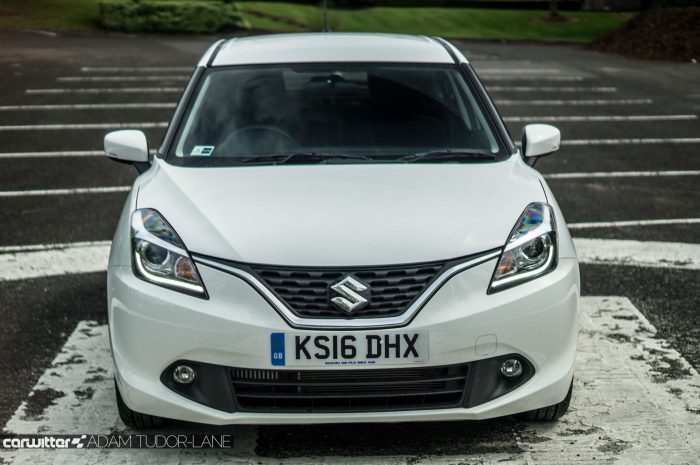 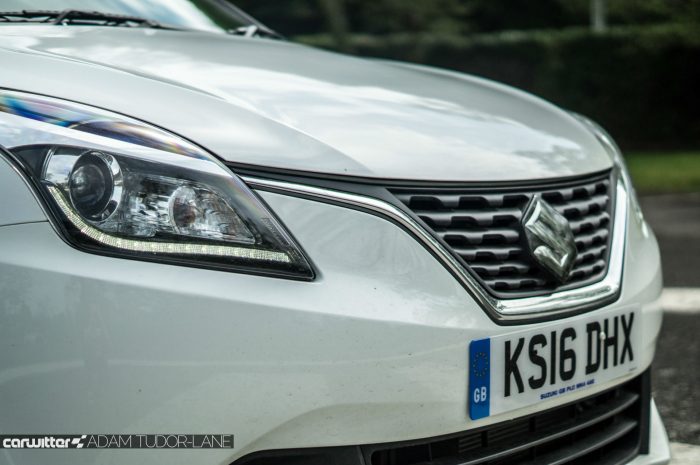 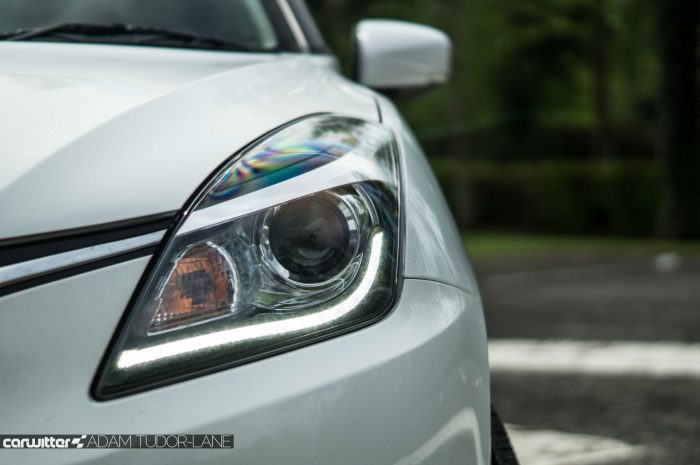 From the front the small grilled Baleno looks rather perky, chirpy and happy. The grille flows into the front headlights which is a nice touch and makes the car seem wider than it is.

The rear is less appealing, it has a very subtle built in upper spoiler, but then there is an additional ‘lower’ spoiler that sits directly underneath the tailgate glass. You can only get this in chrome and it just looks a little…Halfords. 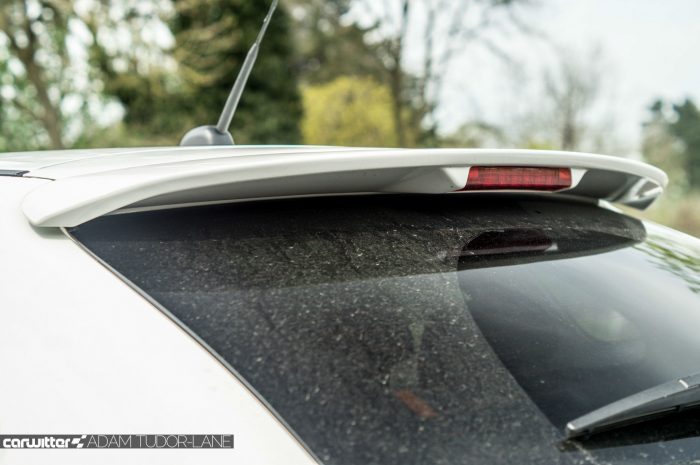 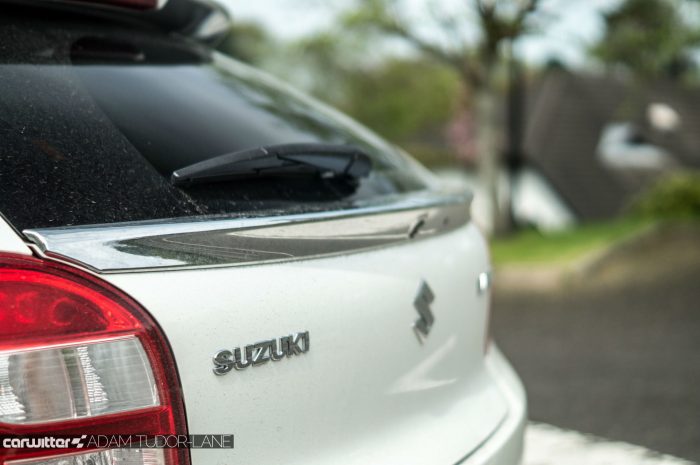 You can get away with it on the white cars, but on the solid red it just looks god awful. I guess we will have to wait for the Baleno SZ-L with a ‘Black Pack’ to make it more subtle.

Chrome on the grille is fine, but it isn’t needed on the handles or the rear spoiler. Chrome doesn’t equal premium, especially at this price point. 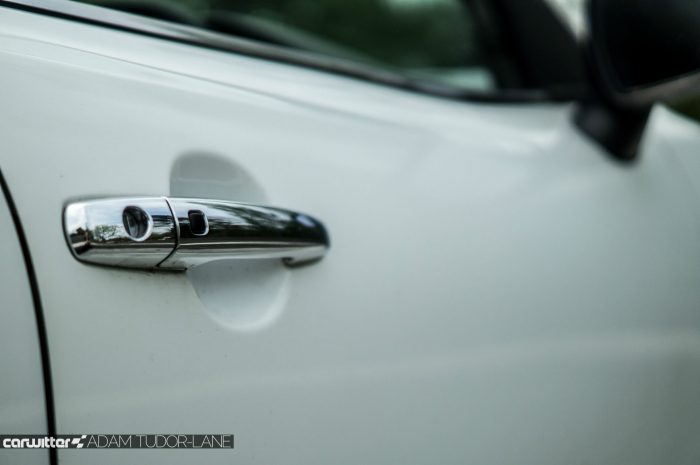 The exciting thing about the Baleno is just how lightweight it is. The 1.0 litre BOOSTERJET starts at 950kg, when comparing that to the class rivals in some cases the Baleno can be up to 200kg lighter.

This means that even when powered by a three cylinder 1.0 litre turbo engine it still achieves a rather decent 11.4 seconds to 62. Not rapid, but due to the 170 Nm of torque the 109 BHP engine pulls really well. It feels like it has some go to it…even if the accelerator has a tiny amount of travel, it’s more of a digital throttle, on or off.

Steering is a little on the light side, but the Baleno corners confidently at speed making it a fun little car to drive. You can definitely tell there’s Swift heritage at work. 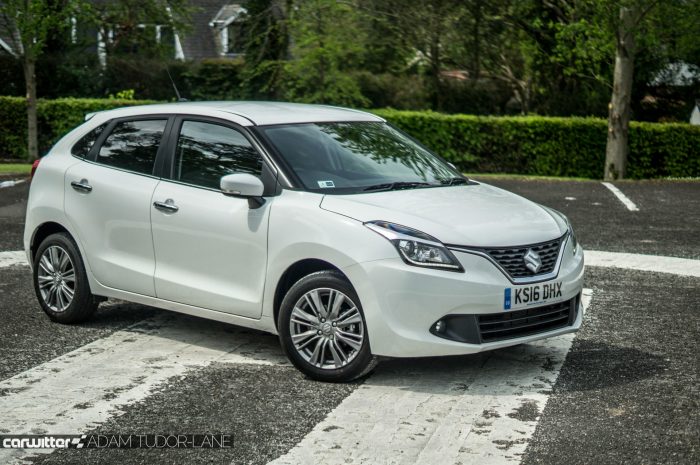 Letting the three cylinder rev toward the red line creates a rather addictive thrum, it’s the type of engine that loves to be pushed hard, pulling well all the way to the end thanks to the turbo bolted onto it.

We also drove the normally aspirated 1.2 with its ‘mild hybrid’ system. This is basically a big battery under the passenger seat that helps the engine under acceleration. Dubbed the SHVS – Smart Vehicle Hybrid by Suzuki – catchy, it just feels a bit gutless when driven back to back with the BOOSTERJET.

It’s only available in SZ5 trim and actually comes in at £500 less than the same specced 1.0 litre?! 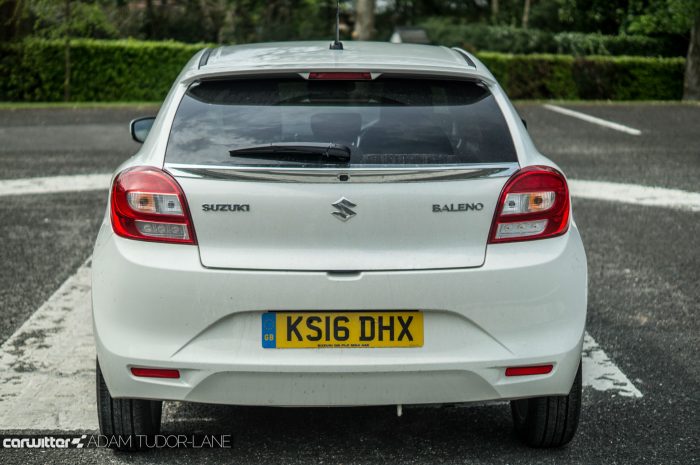 The Baleno suffers from a lack of a sixth gear, which is a shame as a cruising gear would be perfect for economy and refinement. Instead you end up with a slightly noisy cruiser, meaning the Baleno is more suited to around town roles.

Ride is pretty decent, we found it to be a little stiff over some of the rougher roads. Shuffling around on broken sections rather than taking them in its stride.

Refinement could be worked on a fair bit to be honest, you get quite a bit of tyre roar at higher speed which is a shame and coupled with the increase in pace you get added wind noise. 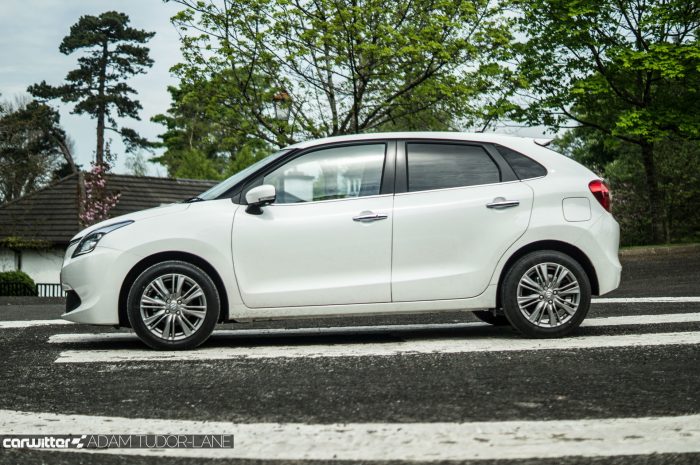 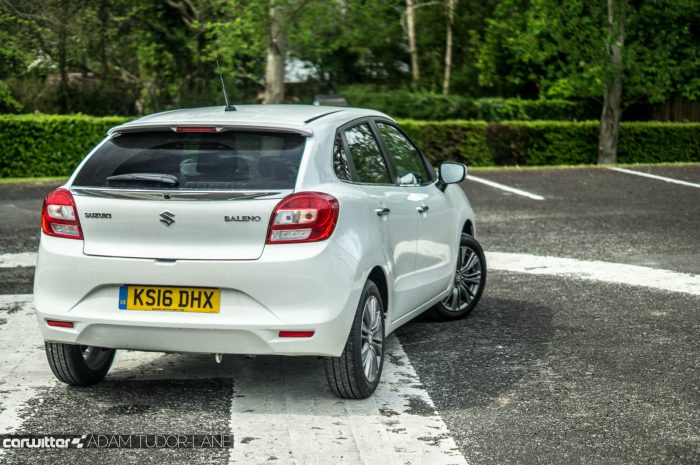 Inside the Baleno is pleasant enough. Plastics are what you would expect from Suzuki, easy on the eye and a little scratchy to the touch in places.

For the first time on a Suzuki you get a colour LCD display (on the SZ5) in-between the dials, and the new style infotainment that was first seen on the Vitara is nice and easy to use, it also features Apple CarPlay which is impressive. 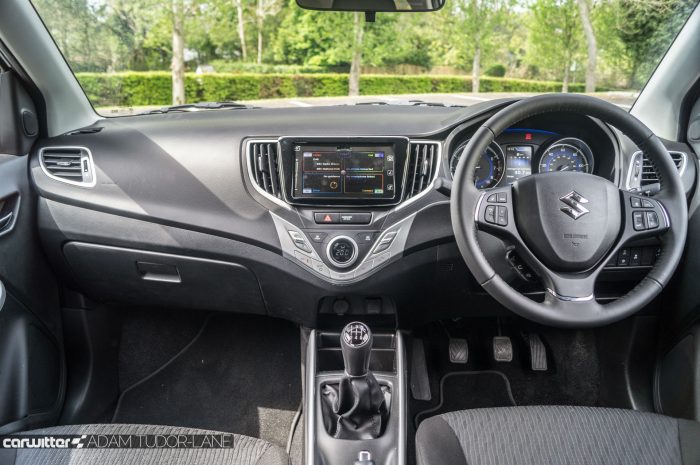 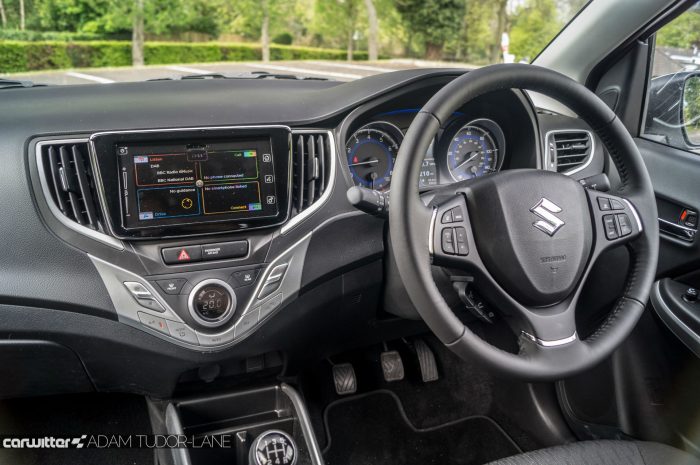 Heating controls are to be found either side of the small circular dial lower down on the dash. The silver trimmed buttons feel a little on the cheaper side, but the contrasting look mimics the vents above which is smart. 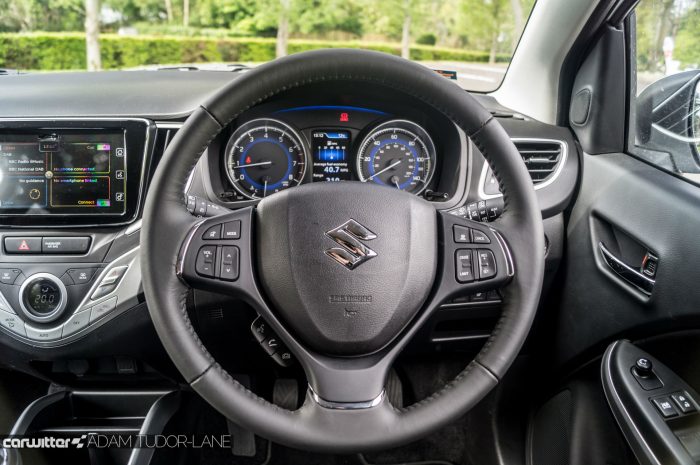 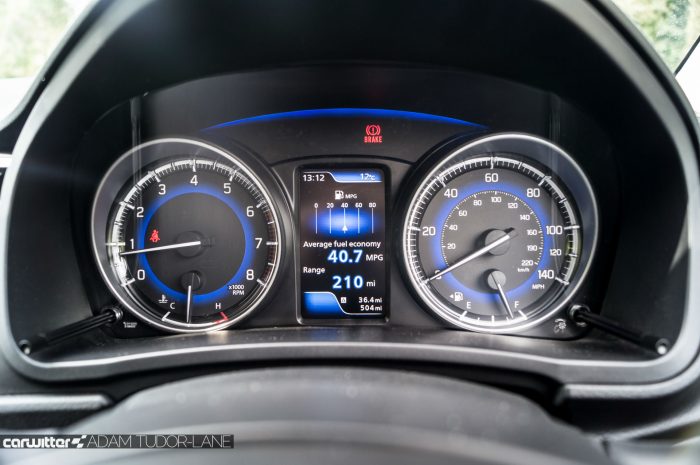 Rear seat legroom is the main thing to shout about in the Baleno. Its little brother the Swift has always suffered with this in both its three and five door forms, but the Baleno is suitably spacious.

Even with a taller driver you will have enough knee room in the back. You’ll have to mind your head though, as that falling roof line makes it a little tight. 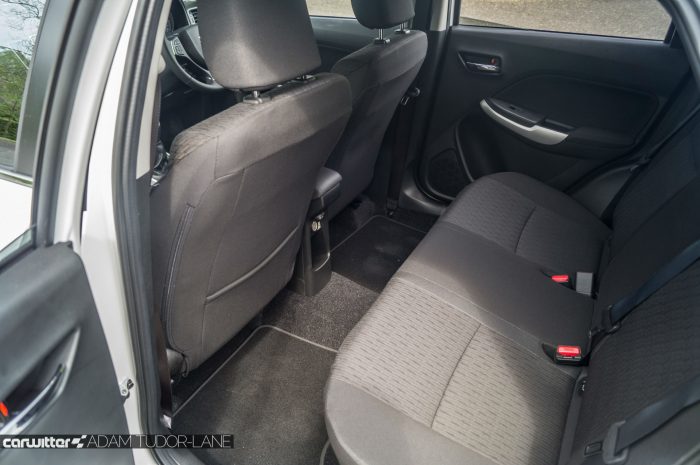 Boot space is about 10 litres less than class leading at 320 litres, but that is 109 litres better than a Swift. It has a rather deep lip to it, but a two stage floor means you can raise it up allowing easier access. 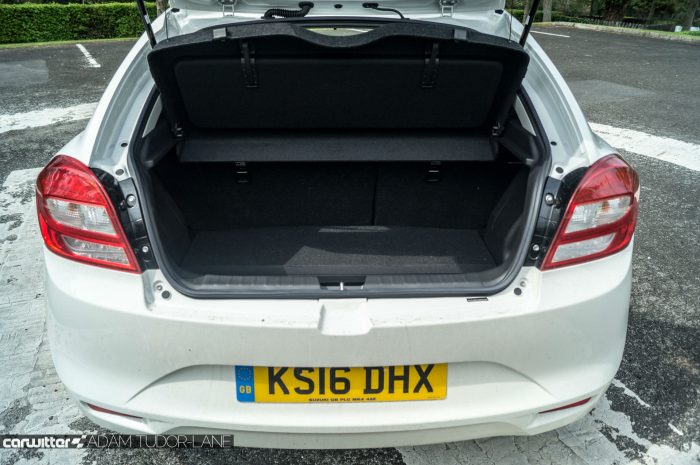 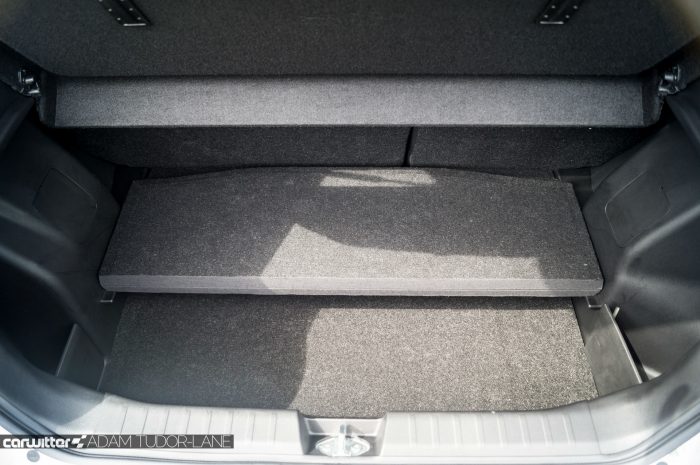 For a car built in India the Baleno isn’t half bad. It didn’t score the best in it’s EuroNCAP crash testing, being a three star car overall. But with the guidelines changing it achieved four stars due to its adaptive cruise control and radar brake assist.

The Baleno is fun to drive with a nippy engine and a generous level of standard kit. Starting from under £13k means you can’t really go wrong if you’re in the market for a second family car for around town duties. 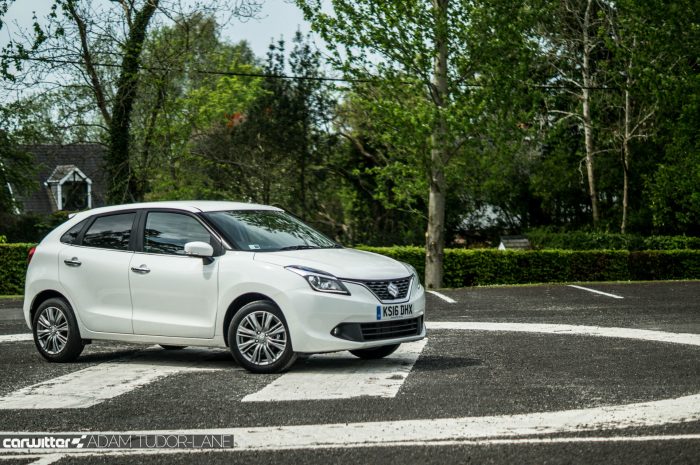 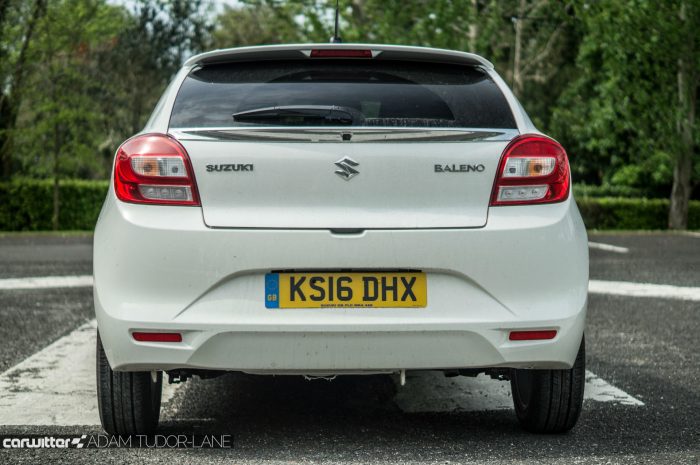 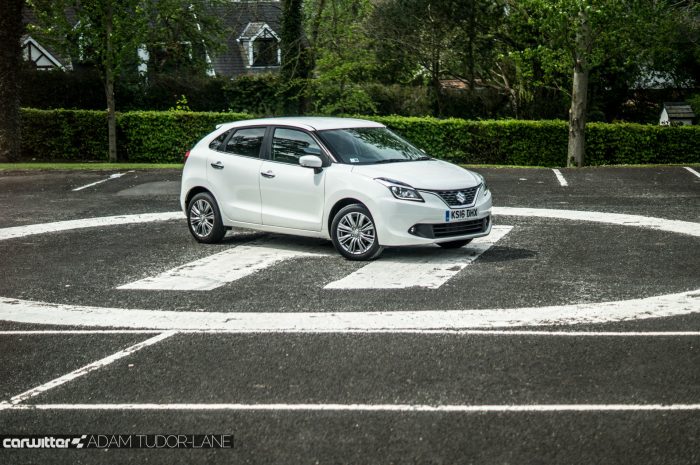